Dynamo Moscow climbs to fourth in the Western Conference with an assured 4-1 victory over Traktor.

The Blue and Whites made it two wins in a row thanks largely to a strong show between the piping from back-in-favor goalie Alexander Yeryomenko. He returned after sitting out the last four games and betrayed no sign of the early season wobbles that saw him ship 10 in the first two encounters of the season.

At the other end Maxim Pestushko set the home team on its way with a short-handed goal in the 11th minute before Martins Karsums doubled the lead on the power play early in the second.

It all went wrong for Traktor in the last 10 minutes, with Denis Mosalyov and Kaspars Daugavins scoring in the space of barely a minute before Mosalyov won a penalty shot that was saved by Vladislav Fokin’s pads.

With just 15 seconds left Stanislav Chistov robbed Yeryomenko of a shut-out, but the points were already safe. 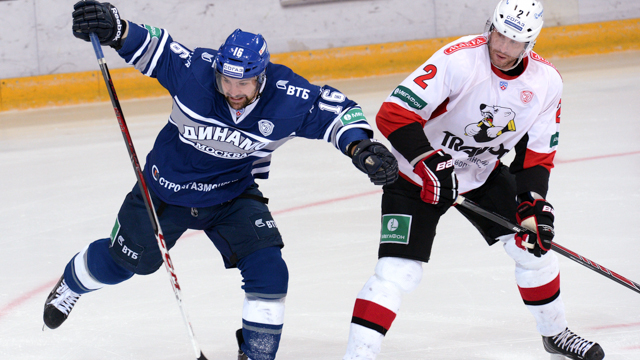 Medvescak wins clash of the strugglers
The bottom team in each conference, Medvescak and Lada, met in Zagreb – and it was the hosts who came out on top.

The home side created more opportunities in the first two periods but still went into the second intermission with the scores locked at 1-1.

But a third-period blitz lifted the Bears to victory. Matt Anderson made it 2-1 in the 44th minute, deflecting Aaron Polushaj’s shot from the point, and Martin St. Pierre increased the margin 90 seconds later. A Jamie Wright penalty shot made it 4-1 before Anderson and Polushaj combined to set up Nathan Perkovich for the fifth.

Goalies on top in Astana
Goalies Jan Laco and Ilya Sorokin were the stars in Astana as Barys took on Metallurg Novokuznetsk. The duo made 55 saves between them to keep the game goalless until overtime.

The winning goal came on 63:50: Evgeny Blokhin seemed poised to shoot from the point, but instead his pass picked out Brandon Bochenski on the slot and the American forward finally managed to beat Sorokin at close quarters. The point keeps Metallurg in the top eight in the Eastern Conference, however, an encouraging start for a young team widely tipped to struggle this season.