All smiles for Jokerit. September 8 round-up

The clash of the KHL newboys ended in a decisive 3-0 victory for Jokerit over Sochi. A combination of great goaltending from Riku Helenius, who made 29 saves including a fine block with an outstretched pad to deny Mikhail Anisin, and clinical finishing from the Finnish forwards proved to be good enough to subdue Sochi.

Linus Omark opened the scoring in the first period, and Jokerit may have felt the margin should have been greater at the intermission. But Niko Kapanen eased home nerves when he wrapped up a neat power play move midway through the second and Niklas Hagman found the net for the third game in a row to seal the victory. 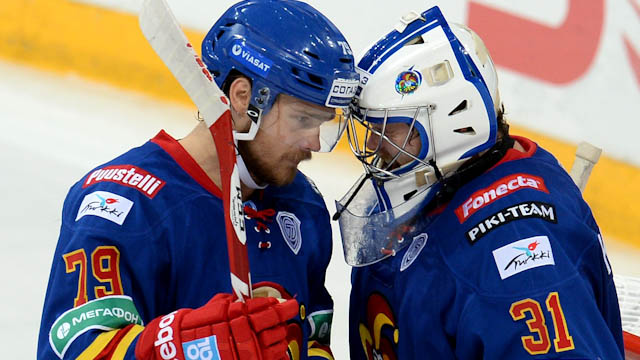 SKA storms on
It’s three wins from three in St. Petersburg with Dinamo Minsk becoming SKA’s latest victim – but a 5-2 scoreline does a slight disservice to the Belarusians.

SKA benefitted from two empty net goals – one of them short-handed – to secure the win after being outshot 36-31 by the visitor. Ilya Kovalchuk scored twice, including the game-winner and the second empty-netter but Alexander Salak was given a thorough work-out in the Petersburg goal to deny everyone apart from Artur Gavrus and Dmitry Meleshko.

Lada wins at last
It’s been a long wait – since Feb. 2010, in fact – but Lada Togliatti has won in the KHL once again. The Motormen did it the hard way, recovering from 0-2 before sinking Neftekhimik in overtime, but the season is finally up and running for Sergei Svetlov’s men.

Karol Sloboda was the hero, netting the winner 90 seconds into added time. But that victory looked a long way off when Yegor Milovzorov and Pavel Zdunov put the visitors in control early on.

Lada hit back and Alexander Chernikov gave the team a 3-2 lead at the midway stage. Even after Josh Hennessey’s equalizer the home team probably shaded the chances without finding a decisive goal in regulation. But the crowd finally got the win it was looking for when Sloboda fired across the face of goal to score at the far post. 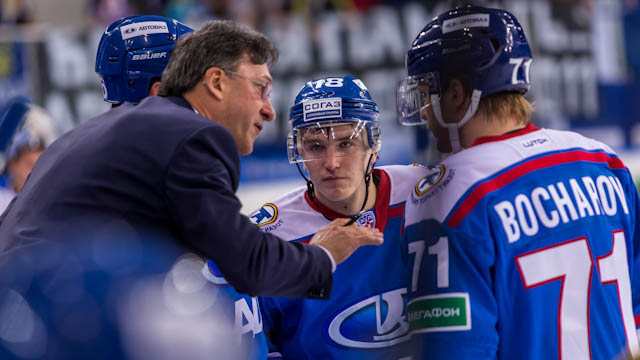 Dynamo delivers
It was third time lucky for Dynamo Moscow, but Severstal remains winless in three attempts. Three goals from three newcomers helped the Blue-and-Whites edge a 3-2 verdict in Cherepovets. Alexei Tereshchenko got the game-winner with 10 minutes left to settle a tight game.

Dynamo had led twice before that, but Mat Robinson’s opener was cancelled out by Marek Kvapil, playing against his former club. Then Kaspars Daugavins opened his account for the Moscow team only for Dmitry Kagarlitsky to level.

The day’s biggest scoring game came in Omsk where Avangard shot down Vityaz 8-5. Roman Horak’s double helped Vityaz to a 4-2 lead at the first intermission before the home team recovered strongly. Sergei Kalinin and Sergei Shirokov led Avangard’s scoring with two each, while Vladimir Sobotka got his first KHL goal following his move from St Louis.

There were goals aplenty in Ufa as well where Amur withstood a Salavat Yulaev fightback to win 5-3. The visitor led 3-0 at the second break with goals from newcomers Rastislav Spirko, Jesse Niinimaki and Tommi Taimi. Salavat Yulaev then hit back in the third, tying the game at 3-3 in the 53rd minute only for Dmitry Tarasov to notch twice in the closing stages to secure the win.

Lokomotiv also hit five to recover a 0-2 deficit and win in Riga. Geoff Platt led the way with two goals, including the game-winner, as the Yaroslavl men wiped out second-period markers from Juris Upitis and Roberts Bukarts. Martin Thornberg also scored twice and Daniil Apalkov completed the scoring. 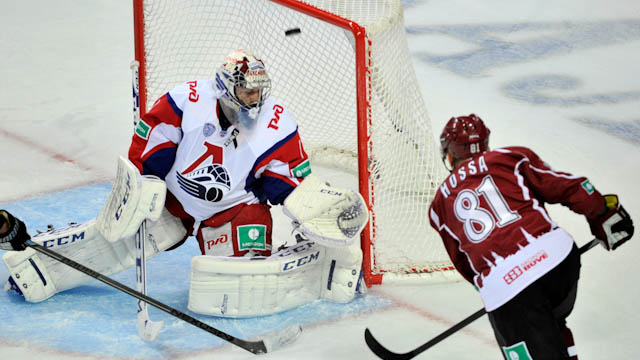 Three third-period goals took Metallurg Magnitogorsk to a 4-1 win over Atlant. The teams were tied at 1-1 going into the last session, but Yaroslav Kosov got the game-winner on an early power play before Jan Kovar and – inevitably – Sergei Mozyakin also hit the net.

There was little joy for the new-look Medvescak as Ak Bars roared back from Saturday’s home loss against Atlant. The Kazan team opened up a 4-0 lead with defenseman Ilya Nikulin chipping in 1+1 and the outcome was clear long before the Croatians grabbed a couple of late consolation goals.

CSKA made it two wins from two thanks largely to Jan Mursak’s hat-trick – but Ugra made it close in Moscow despite giving up a 0-3 deficit. The visitors struck three times in the final session, but lost out 4-3. Igor Grigorenko scored for the second game running for the Army Men. 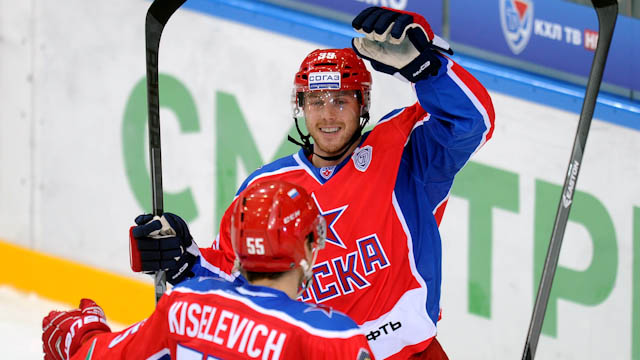 A last-gasp Jarkko Immonen goal could not save Torpedo from defeat at home to Traktor. Immonen tied it at 4-4 with just eight seconds to play, but Stanislav Chistov won it for Traktor in the shoot-out.

A Konstantin Rudenko hat-trick saw Barys cruise to a 4-0 win over Admiral in Astana. The home team was 3-0 up inside 15 minutes thanks to two from Rudenko and another from Dustin Boyd. Rudenko completed his treble in the third while Jan Laco had 30 save for his first shut-out in Kazakhstan.

Slovan followed up Saturday’s shock success at Magnitka with another road win at Avtomobilist to improve to 3-0 at the start of the season. Tomas Netik, Milan Bartovic and Tomas Surovy found the net in a 3-1 victory.