In search of a new home

The news that three clubs would sit out the upcoming KHL season came as a huge disappointment to their fans and the competition as a whole. But the players of Lev, Donbass and Spartak faced a more immediate challenge – finding a new employer. Many of them will be continuing in the KHL this season – here’s a run-down of the biggest moves.

Perhaps the most sought-after signature from the clubs on sabbatical was Lev’s dynamic forward Justin Azevedo. His regular season return was a solid 9+18 but the Canadian forward really caught fire in the play-offs. He had 20 points in 22 post-season games and scored in all seven encounters with Metallurg Magnitogorsk in the Gagarin Cup final as Lev came within a game of snatching the big prize. That success attracted Ak Bars’ interest and the Kazan club announced his signing on the same day that Lev withdrew from the coming season’s competition. However Jiri Sekac won’t be joining Azevedo in Kazan – he accepted an offer to go to Montreal instead.

Lev’s players have dispersed widely across Europe, but several of them will remain in the KHL. Club captain Jiri Novotny moves to Lokomotiv, along with forward Martin Thornberg. Newcomer Jokerit Helsinki also features two of Lev’s Finnish contingent with Topi Jaakola and Niko Kapanen returning to their homeland. Atte Engren, another Finn, impressed as back-up goalie last season and moves to Atlant where he looks set to be first choice for Alexei Kudashov’s team. 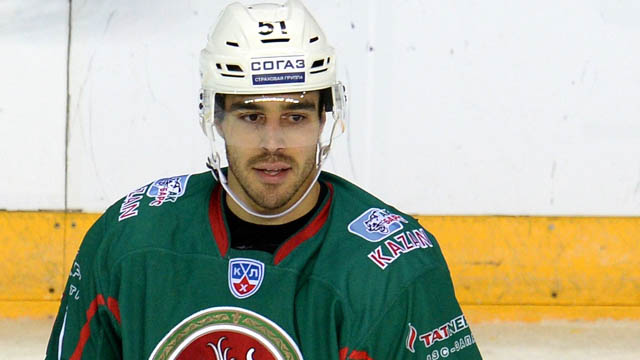 Justin Azevedo will be playing for Ak Bars this season

Barys was quick to offer a position to former Donbass coach Andrei Nazarov, appointing him in place of Ari-Pekka Selin. He brought Vladimir Vorobyov and Igor Kalinin with him to Astana, and also recruited Slovak international goalie Jan Laco for his new club. Young Kazakh defenseman Stanislav Zinchenko, who featured regularly for the Donbass youth team in the MHL, also moved from Ukraine to Kazakhstan.

But Nazarov did not plunder the stars of his previous team. Two of last season’s big hitters moved on to KHL giants, with Russian international Evgeny Dadonov switching to SKA and lively ex-Traktor forward Maxim Yakutsenya returning to the Urals to join defending champion Metallurg Magnitogorsk.

The league’s newcomers also picked up a few recruits from Donbass. HC Sochi did well to secure prolific defenseman Clay Wilson, one of the key men in Donetsk last season. The Black Sea boys also signed up 19-year-old forward Yegor Morozov as one for the future. Another experienced D-man, Peter Podhradsky, went to Lada along with goalie Sergei Gaiduchenko. 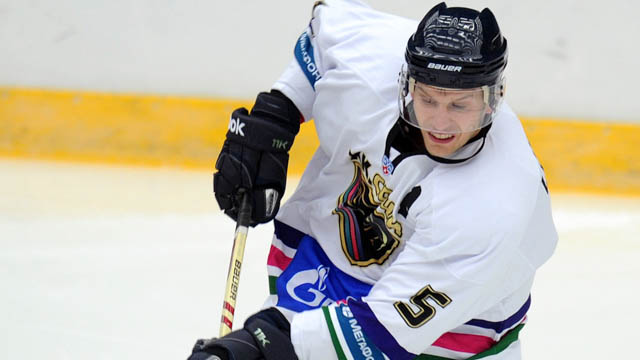 From Spartak to SKA

As the full extent of Spartak’s financial crisis became clear there were real fears that the club’s youth system would also disappear. Despite the uncertainty, the junior Red-and-Whites managed to win the MHL championship in some style, defeating Moscow rivals Krasnaya Armiya in the final. To ensure they could defend the title, a deal was struck with SKA: the Petersburg team took 15 players to the Northern Capital, most of them promising youngsters; the transfer fees ensured that Spartak could represent the MHL in the pre-season World Club Championship in Ufa as well as continuing in the youth league next season.

SKA’s new recruits include several players with great potential, most notably goalie Igor Shestyorkin, who was Russia’s first choice in the 2013 World U18 Championships. The most experienced of them is defenseman Andrei Sergeyev, previously with CSKA, who has 155 KHL appearances under his belt.

Many of Spartak’s more established players departed during the previous season but there were still a few familiar names who became available in the summer. Vyacheslav Kozlov, perhaps the most notable among them, signed a one-year deal with Atlant. Avangard snapped up a handful of players, including Swedish forward Tom Wandell and promising defenseman Evgeny Kulik. 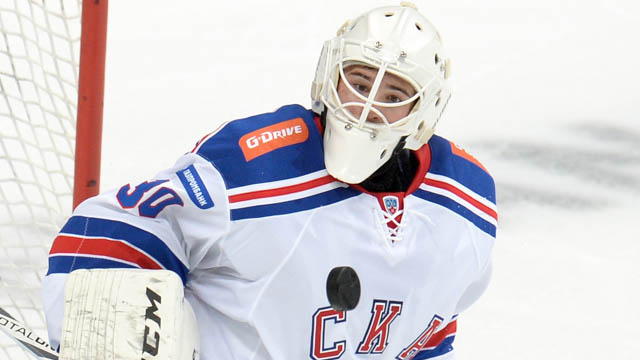 Igor Shestyorkin is one of SKA's new generation recruits