Two goals in the space of a minute deep into the second period ultimately decided the outcome of the 2014 Gagarin Cup, with Yaroslav Kosov and Jan Kovar leading Metallurg to a 7-4 victory on the night and a 4-3 series success to give the Steelmen the KHL’s top prize for the first time.

It means Mike Keenan becomes the first North American coach to take the top prize in Russian club hockey; 20 years after landing the Stanley Cup with the Rangers, the Canadian adds the Gagarin Cup to his CV. That delivers a sharp riposte to those Trans-Atlantic commentators who insisted that his notoriously uncompromising man-management style was the relic of a dinosaur rather than a viable path to future glory.

Victory is also a personal triumph for Mozyakin, the KHL’s most reliable plunderer of points. He had one goal on the night, taking his season’s point tally to 106 as he secured his first major club trophy and banished the memory of 2011’s final series loss with Atlant. Mozyakin, another man sometimes regarded as a throwback to an earlier era of hockey, missed out on the Olympics – a decision which still divides opinion among Russian fans – but ends the season with rather more than a consolation prize.

Unusually Mozyakin was not involved in those decisive second-period markers: instead it was Kosov who snapped a 2-2 tie after Evgeny Timkin got away from Calle Ridderwall and dropped the puck off for his team-mate to launch a one-timer past Petri Vehanen. Just 40 seconds later Mozyakin’s line created the fourth goal; Danis Zaripov’s wrist shot was tipped in by Kovar on the slot to give Magnitka some vital breathing space in the game.

But the season’s top scorer added to his record-breaking haul early in the third: a one-on-one rush saw him hit the post; Zaripov’s perceptive pass left substitute goalie Atte Engren floundering as Mozyakin fired home to turn the victory into a procession. Zaripov added a deserved goal of his own in the 53rd minute to leave the home fans revelling in their team’s triumph. Martin Thornberg and Justin Azevedo – the latter completing a scoring streak that saw him find the net in every game of the series – reduced the deficit in the closing stages, but an empty-netter for Mikhail Yunkov ensured that the final word went to the home team. 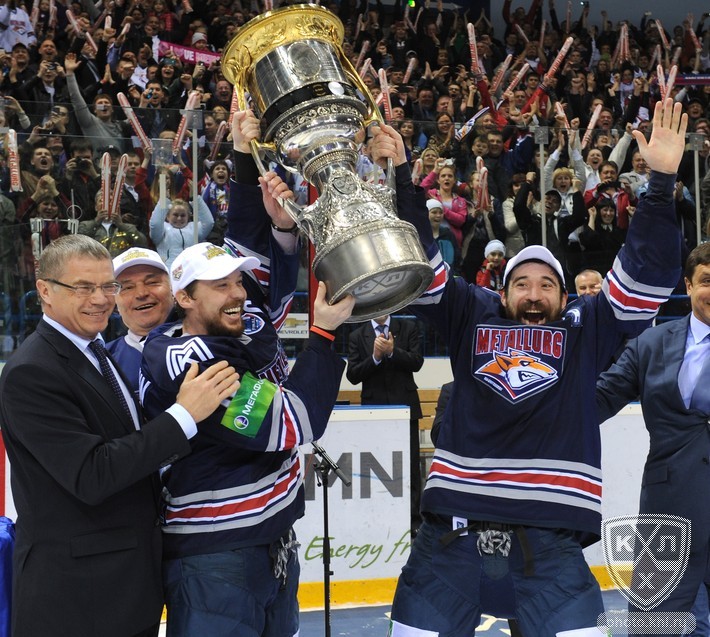 The vital opener
In five of the six previous games the team scoring first had gone on to win, so when Magnitka opened the scoring in the fifth minute it was greeted as a huge psychological boost for the home team. Francis Pare claimed the marker, tapping home after Yaroslav Khabarov’s deflected blue-liner squeezed through Petri Vehanen’s pads.

But Lev peppered Vasily Koshechkin’s goal with shots and tied it up in the 14th minute. Mark-Andre Granieri shot from deep and David Ullstrom got the vital touch to deceive the keeper. The first period ended with a flurry of chances: Patrik Zakrisson couldn’t convert a Mikko Maenpaa pass before at the other end Mozyakin fired into the boards only to be kept away from the rebound by Vehanen’s flailing stick. Immediately play swept back down the ice, and Niko Kapanen was agonisingly close to turning home the rebound from a Justin Azevedo shot into the goalie’s pads.

The middle session began with Metallurg again inching ahead thanks to Evgeny Biryukov. The defenseman hadn’t scored all season, but found Vehanen’s top corner with a wrist shot from the edge of the circle. That prompted a siege of Koshechkin’s goal once again, and after several close shaves Magnitka’s defense was finally left exposed as Ryan O’Byrne scored for the second game in succession. The Canadian’s previous marker set the Czech team on the road to a dramatic recovery in game six, but despite tying the game at 2-2 Lev could not repeat Monday’s heroics. 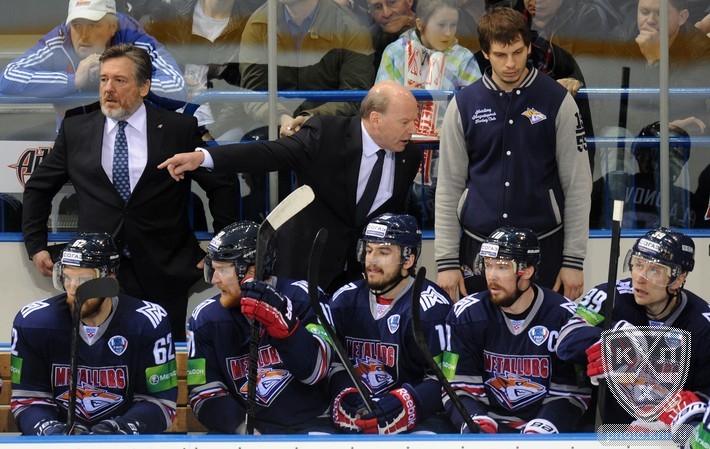 Writing new records
The 2014 Gagarin Cup final also marked several records. Mozyakin took his season’s points tally to 106, setting a new record for KHL, Russian Superleague and Soviet League hockey while Keenan became the first non-Russian coach to win the Gagarin Cup and the first foreigner to take the Russian championship since Vladimir Vuitek’s double triumph in Yaroslavl in 2002 and 2003.

Lev also wrote a distinguished chapter in the record books, becoming the first non-Russian team to contest a Gagarin Cup final after battling its way through the Western Conference. Game 4 at Prague’s O2 Arena also established a KHL attendance record of 17,073, beating the previous best set in Game 3. Lev also took part in the first ever KHL play-off game to go to a fourth period of overtime, finally losing 3-4 to Donbass after 126:14 of game time. Azevedo, perhaps now the most famous hockey player to claim Portuguese roots, also managed a big personal achievement, becoming the first player to score in all seven games of a KHL final series.

Azevedo’s eight goals made a big contribution to the 44 shared between the teams in the final series – that, as well as the 11 scored in tonight’s decider, also set a new KHL record.