Avangard’s play-off hopes took a jolt when Donbass scored a 2-0 win in Omsk. The home team had moved level with eighth-placed Traktor thanks to a three-game winning streak, but was undone after running into penalty trouble midway through the third.

First Donbass’ leading scorer Lukas Kaspar opened the scoring as Stefan Ruzicka sat out a minor penalty, then Evgeny Dadonov converted the opportunity while Dmitry Semin looked on. Visiting goalie Jan Laco recorded 30 saves to post a shut-out which helped his team back up to fourth in the West. 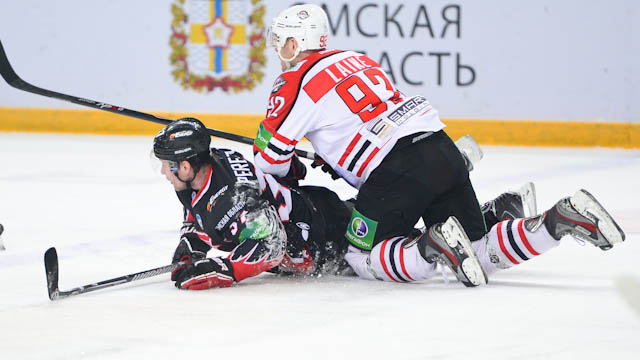 Unlucky 13 for Spartak
Spartak’s troubles continued, going down to a 5-3 defeat at Ugra despite leading for much of the game.

The first period saw the visitor seize control right away: Filipp Toluzakov opened the scoring after 95 seconds and Denis Bodrov doubled the lead in the eighth minute. But Ugra rallied to tie it up in the second session, prompting fears that Spartak’s familiar frailties would hurt the team once again.

And so it proved: although veteran Vyacheslav Kozlov converted a power play early in the third to give Spartak a slender lead, the home side struck back with two quickfire goals in the 52nd minute. Andrei Shefer’s second of the game tied it up before Tomas Starosta got the go-ahead goal and shattered Spartak hopes.

Around the league
Dinamo Minsk sprung a surprise at Barys, beating the Eastern Conference high-flyer in overtime. Andrei Stas cancelled out Brandon Bochenski’s third-minute opener to leave the game tied 1-1 on 60 minutes. In the extras Lukas Krajicek got the winner for Dinamo on 61:56. Barys thus suffered a third successive defeat.

Avtomobilist’s good form continued with a 2-0 home win over Medvescak. Tobias Viklund and Igor Yemeleyev got the goals to make it five wins out of six this year for the Yekaterinburg team.