We’re deep into the post-season pause – but hockey continues. Barys has a host of players representing Kazakhstan at the World Championships, clubs continue to shape their rosters for next season and there’s more news of the upcoming KHL Closing Ceremony.

Kazakhstan struggles as Worlds get started

The 2022 IIHF World Championship got underway in Finland. With Russia and Belarus absent from this year’s tournament, there are fewer KHL connections than usual. However, Team Kazakhstan is in Helsinki, drawing heavily on the Barys roster.

Unfortunately, the Kazakhs found life tough at the start of the tournament. An opening 1-9 loss to Denmark was a morale-sapping blow and even though game two brought an improvement, Valery Orekhov’s goal was not enough to prevent a 2-1 loss against France. Head coach Yury Mikhailis saw some positives from the encounter with the French.

“We played more disciplined,” he said. “We started well, we were organized, we opened up the play for each other. We generated good offense out of our zone and scored a goal. I thought we controlled the first period.”

However, he added that needless penalties handed France the initiative. Kazakhstan returns to action on Tuesday against Switzerland. The Swiss are level with Canada at the top of group A after winning their first two games; in Group B, Finland and Sweden are on top while Latvia is still awaiting its first win.

There is less of a KHL influence on the individual charts as well. However, Juho Olkinuora, who played in goal for Metallurg this season, is among the leading goaltenders. The Finn has played one game so far, enjoying a shut-out in a 5-0 victory over Norway. The leading scorer is Czech veteran Roman Cervenka, familiar to fans of Avangard, Lev Prague and SKA. He has six assists from two games.

Melnichuk comes back to Russia

Goalie Alexei Melnichuk is heading home to join HC Sochi. The 23-year-old Petersburg native spent the last two seasons with the Sharks organization. He made three NHL appearances and had 48 AHL games with the San Jose Barracuda. Previously, Melnichuk made his KHL debut with SKA after working his way through the club’s youth system. He also played 14 games on loan at Torpedo in 2020/21. Last week he signed a two-year deal with Sochi.

The Motormen continue their summer rebuild and signed forward Sergei Shirokov on a two-year deal. The former Spartak man had 31 (11+20) points in 50 games for the Red-and-Whites last season, moving to 690 KHL appearances. Shirokov, 36, is a much-titled player who won Olympic gold in 2018, a Gagarin Cup in 2017 with SKA and helped Oleg Znarok win his first World Championship in 2014.

The build-up to the Closing Ceremony continues, and the KHL announced the candidates for two more prizes. Among the league’s veterans, three players were nominated for the ‘Loyalty to Hockey’ award: Dynamo’s Gagarin Cup-winning legend Alexander Yeryomenko, Ak Bars’ ageless talisman Danis Zaripov and CSKA’s Alexander Popov, who was voted playoff MVP this season. At the other end of the scale, the prize for best rookie will be contested by Arseny Gritsyuk (Avangard), Dmitry Rashevsky (Dynamo) and Marat Khusnutdinov (SKA). Keeping everything in order, Sergei Belyayev won the Golden Whistle award for best referee, while Yury Ivanov took the equivalent prize for linesmen.

Fedorov and ‘the best of the best’

CSKA’s cup-winning head coach, Sergei Fedorov, spoke at the club’s end-of-season press conference about his move behind the bench – and the influence of his late father, Viktor.

“To be honest, I never thought about it as a player,” he said. “It would be a bit strange to start taking on a coach’s role when you’re on a team.

“Even when I became GM at CKSA, I had no thoughts about coaching. But my father, who was also a coach, would have been happy with how things worked out. And he’d be doubly happy that in a short space of time we managed to build a team and win the Gagarin Cup. Throughout my career I’ve been fortunate to work with the best of the best.” 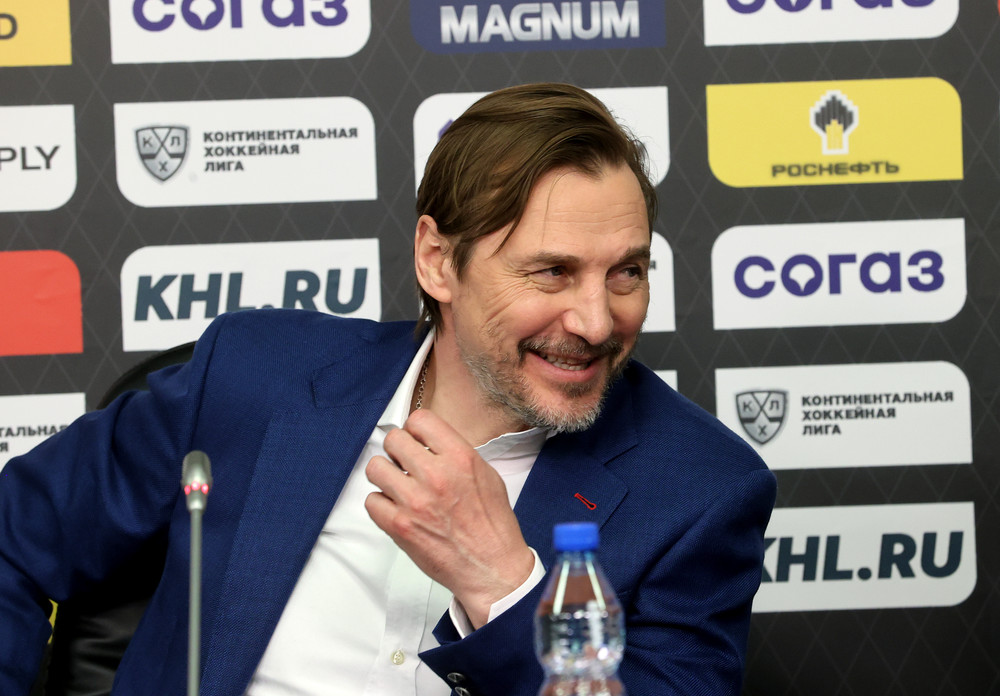