CSKA and SKA won through their conference semi-final series to continue a long-standing rivalry in the upcoming Western Conference final. In the East, Traktor awaits the winner of the remaining match-up, where Metallurg’s Canadian forwards are turning the series around against defending champion Avangard.

SKA’s win over Spartak on Saturday confirms that the perennial Western Conference leaders will meet once again in the conference final this year. SKA will face CSKA for the right to go to the Gagarin Cup final, renewing a rivalry that has met at this stage in five of the previous six completed seasons. SKA’s consistency is impressive: since 2012, when it lost out to Oleg Znarok’s Dynamo Moscow, the Petersburg team has only missed one Conference final. CSKA, meanwhile, has been consistent since 2015, missing out just once in 2017.

Kuzmenko puts SKA on the brink of progress. March 24 playoffs

SKA’s march to the conference final came after four successive 2-1 victories. That’s notable for two reasons. First, only once before has a team won a series with four victories by the same scoreline. That was Ak Bars in 2017, overcoming Salavat Yulaev in round one with a quartet of 2-1 verdicts. Second, over the course of the five games, SKA scored fewer goals than Spartak. The Muscovites won the opening game 6-1 and enjoyed an aggregate score of 10-9 over the course of the series, but were unable to advance further in the tournament.

Sergei Fedorov is a rookie coach, but so far the three-time Stanley Cup winner is finding life behind the bench as rewarding as his titled playing career. A strong regular season campaign warmed up CSKA nicely for the playoffs, and so far the Moscow club is perfect in post-season. Round one saw a sweep of Lokomotiv in a series that many thought might see Igor Nikitin outwit his former club. Now, round two has brought another 4-0 stroll over local rival Dynamo Moscow. Could the Army Men reach the Gagarin Cup final without dropping a game?

Dynamo’s loss to CSKA heralded the end of a great career. After the Blue-and-Whites’ season came to an end, goalie Alexander Yeryomenko announced his retirement. The 41-year-old was instrumental in Dynamo’s two Gagarin Cup triumphs in 2012 and 2013, having earlier been part of Salavat Yulaev’s cup-winning roster in 2011. His longevity is bettered only by Metallurg’s Vasily Koshechkin and his final tally of 299 KHL wins is, likewise, second only to Magnitka’s time-served shot stopper. 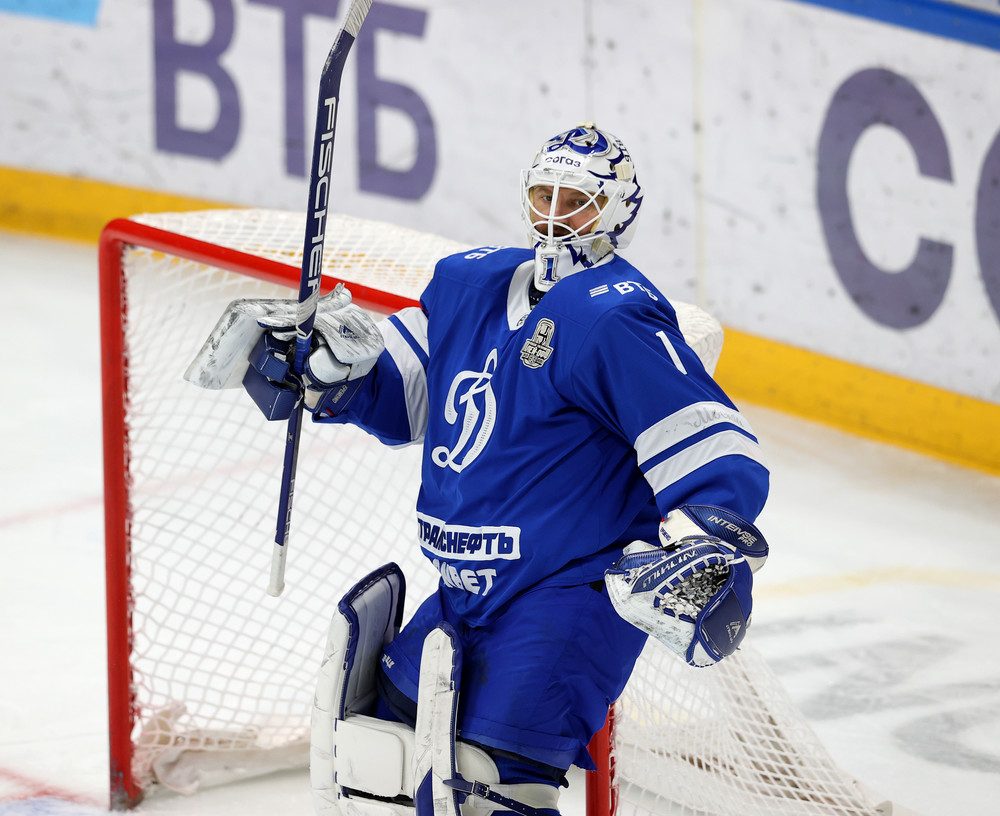 Traktor through to Eastern final

Traktor Chelyabinsk was tipped as one of the most improved teams in the East this season, and so far that billing is justified. Anvar Gatiyatullin’s team is the first to secure a place in the Eastern Conference final after seeing off Salavat Yulaev in six games. Traktor, seeded second in the east, trailed 2-1 in this series but reeled off three straight wins to advance. Game four, which ended in a 7-1 road win for Traktor, was the turning point: aside from the comprehensive loss, Salavat Yulaev also saw captain Grigory Panin suspended for three games after a dangerous hit on Czech forward Lukas Sedlak.

Swedish defenseman Lawrence Pilut isn’t noted for his scoring. Indeed, the Traktor blue liner had gone nine games without a point and 13 months without a goal ahead of game five of the series against Salavat Yulaev. But when the moment came, Pilut stepped up to shoot home the game-winner in Traktor’s 2-1 success and put his team in front for the first time in the series. Now in a purple patch, Pilut followed up with an assist on Vyacheslav Osnovin’s series-settling goal in Sunday’s game six in Ufa.

The fourth conference finalist is still to be determined. Defending champion Avangard seemed to be well on top after two big wins in Magnitogorsk, only to drop two games at home to Metallurg. Then the top seed won game five – the first home victory in the series – to move ahead. Magnitka’s imports have made a big difference, with Canadian forwards Philippe Maillet, Brendan Leipsic and Josh Currie all grabbing goals in both of the last two games. Avangard, which parted company with Finnish defensive duo Ville Pokka and Oliwer Kaski, is starting to look short of numbers on defense, which might cost the Hawks in their title defense.

SKIF on top in regular season

The Women’s Hockey League is close to wrapping up its regular season and, with two games to play, SKIF Nizhny Novgorod has secured top spot. SKIF is a historical powerhouse in Russian women’s hockey, winning nine national titles when based in Moscow and three more after moving to Nizhny Novgorod in 2006. However, in recent seasons the club has been overtaken by Agidel Ufa and KRS Vanke Rays. The last time the club topped the table was in 2014. The remaining fixtures of the regular season could offer a clue about the outcome of the playoffs, with SKIF playing back-to-back against the Rays, who are currently second in the table. Also noteworthy, Moscow Region’s 7.62 is going to the playoffs for the first time, while league newcomer Beliye Medveditsy Chelyabinsk looks set to pip SKSO Yekaterinburg to the eighth and final post season berth in its debut campaign. 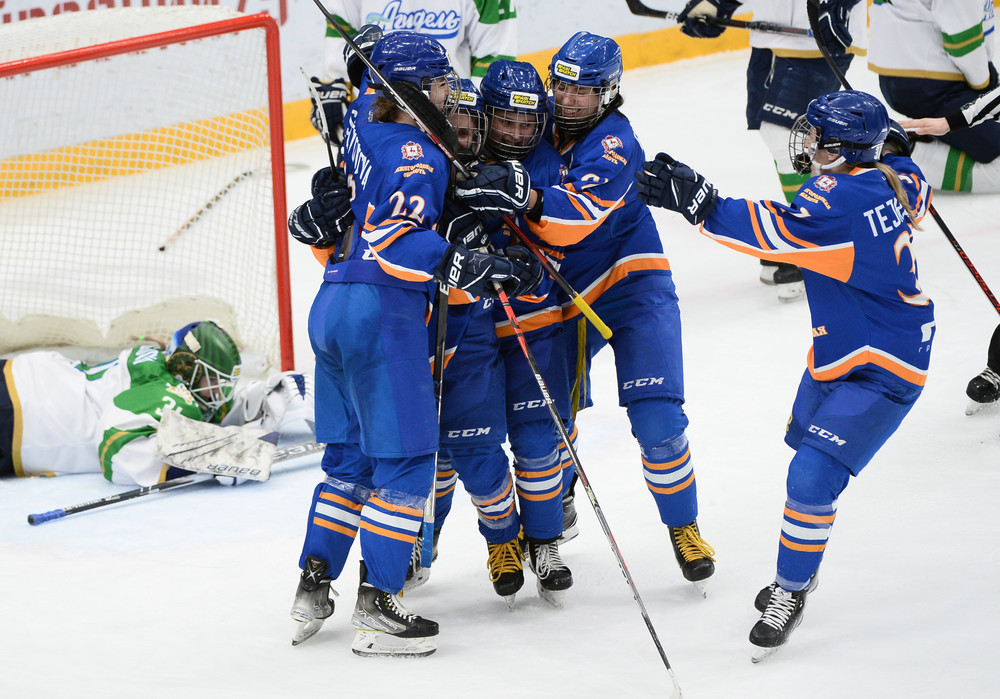 In the Junior Hockey League, the playoffs are also down to the last eight. And the conference semi-finals are more competitive than ever, with three of the four pairings heading to a decisive game five. The Eastern Conference will be settled on Tuesday, when Steel Foxes face Omskiye Yastreby in Magnitogorsk before Chaika faces Irbis in Nizhny Novgorod. Then, on Wednesday, Krasnaya Armiya takes on Loko in Moscow in the outstanding Western pairing. In the other Western Conference series, Matvei Michkov’s SKA-1946 defeated defending champion Dynamo Moscow in three games. 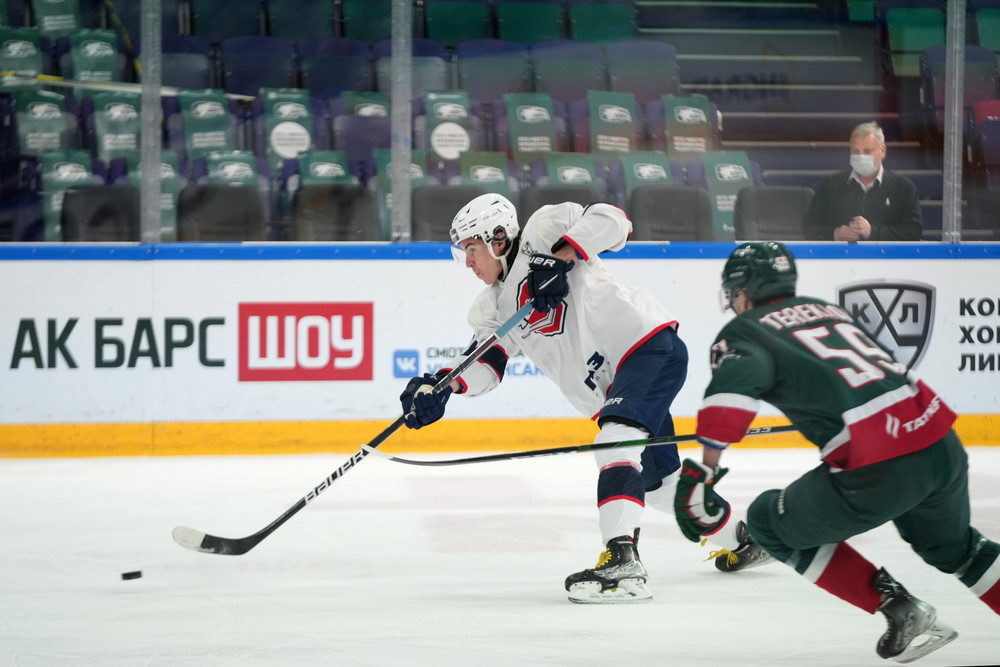