There’s rarely a shortage of goals when Dinamo Minsk plays. After sharing 10 tallies in Friday’s win over Kunlun Red Star, the Bison finished on the wrong end of another 6-4 scoreline here.

Taylor Beck produced four assists for the visitor, but CSKA’s offense proved too hot to handle at the other end as Darren Dietz grabbed the game winner with his first for his new club.

The Army Men came into the game looking to bounce back from a defeat against SKA last time out. The home side wasted little time in getting its offense into the game, and opened the scoring in the third minute when Matvei Guskov redirected an Andrei Svetlakov point shot past Alexei Kolosov in the visitor’s net. However, Dinamo responded strongly and went into the intermission with a 2-1 lead thanks to a pair of quick goals midway through the session. Beck had a hand in both, taking the puck around the back of the CSKA net before laying off a pass for Sergei Sapego to race in and fire home from the center of the zone. Two minutes later he led a breakaway and, after running into trouble on the boards, saw Mattias Tedenby get the puck out to Ilya Usov for an impressive shot to put the Belarusians in front. 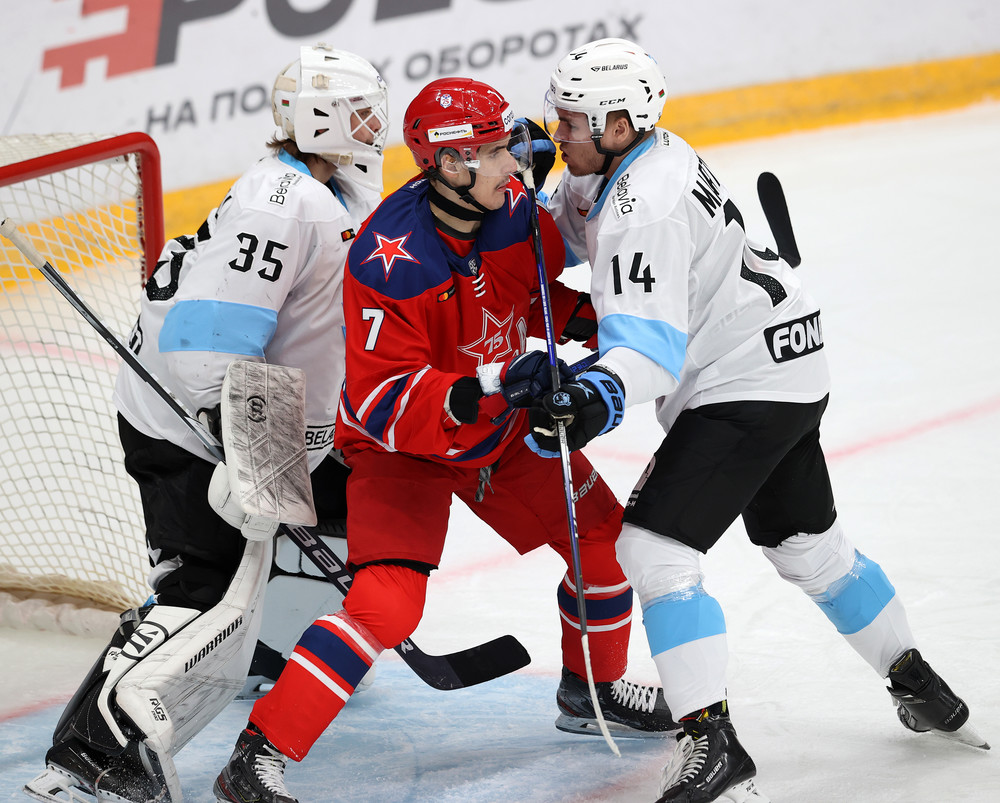 Despite CSKA’s sizeable advantage on the shot count, Dinamo carried its lead to the first intermission. After the break, though, Lukas Wallmark tied the game. However, if the home team expected a straightforward journey from that point, Usov was quick to change their minds. Again, Beck and Tedenby were involved and after the Canadian’s shot got lost among the skates in front of Ivan Fedotov’s net, Usov were on hand to steer the puck into an open goal. This time, though, the lead was short-lived. Svetlakov won an attacking face-off, sent play back to Artyom Blazhiyevsky at the point and his shot flew through a crowd of players to take the game at 3-3.

Dinamo tightened up its defense after that and looked to be heading to the intermission with the scores still deadlocked. However, in the last minute of the session the visitor’s attack broke down and Joakim Nordstrom surged down the ice before setting up Pavel Karnaukhov for the go-ahead goal.

It was not until midway through the third period that CSKA made the game safe. Dietz made it 5-3, bagging his first goal since arriving from Barys, to bring the first power play marker of the day. The Kazakh dual-national also moves to 10 goals for the season and is now out in front among the league’s defenseman-snipers. Dinamo kept pushing for a way back into contention and Tedenby raised the visitor’s hopes with a late goal as Beck produced his fourth helper of the game. However, CSKA would not be denied and Vladislav Kamenev found the empty net to seal the home win.