Kirill Marchenko made an impressive return to KHL action, scoring twice as SKA got its first win in seven games with a resounding success at Neftekhimik. Elsewhere, Damir Zhafyarov’s goal was enough for Torpedo to edge past Salavat Yulaev in Ufa, while Barys defeated Dinamo Minsk in a shoot-out.

Tomas Jurco picked up his first KHL point to help Barys record a second successive victory. The Kazakh team is showing signs of emerging from its recent slump and followed up Saturday’s overtime success at Severstal with another shoot-out verdict at home to Dinamo Minsk.

Jurco, who arrived during the international break, opened his account with an assist on the opening Barys goal. He got the helper on his team’s power play tally, battling on the slot to fire in a shot that Linden Vey deflected past visiting goalie Patrik Rybar. That came after five minutes as the Kazakhs looked to build on Saturday’s morale-boosting win. 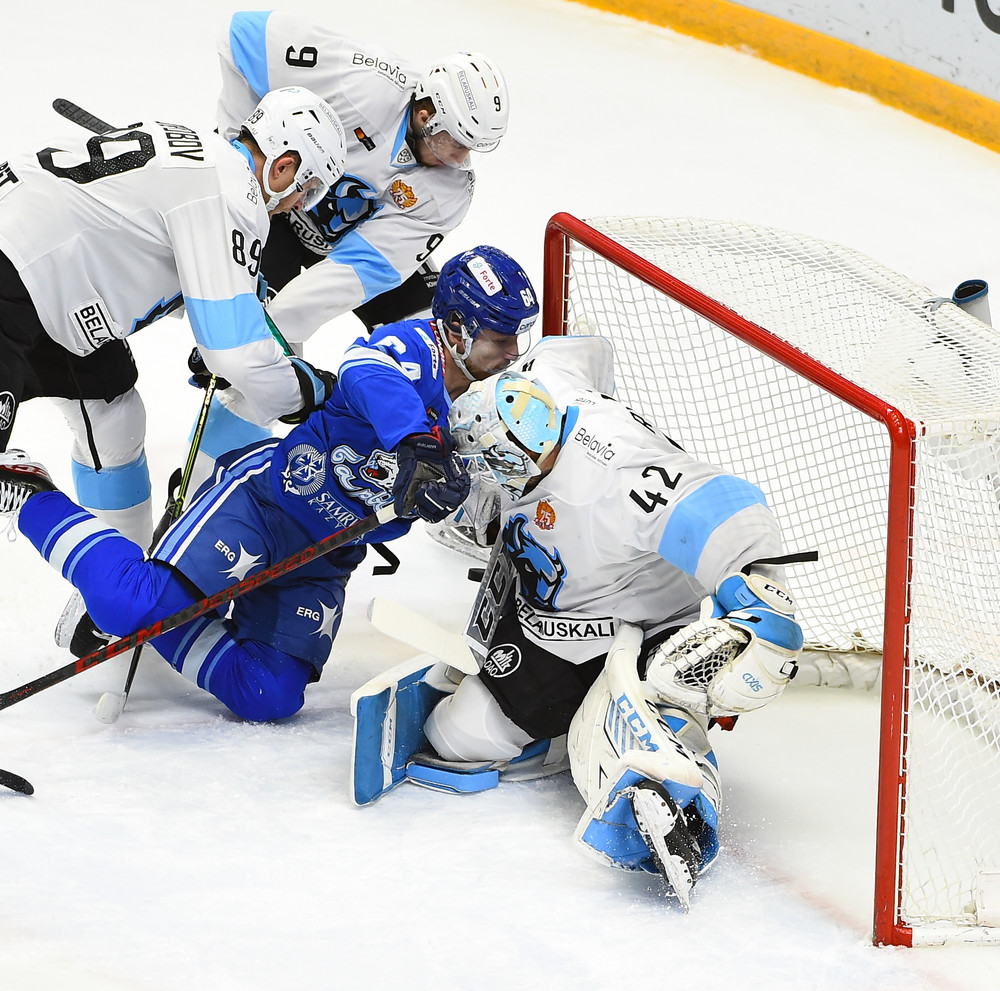 However, Dinamo, another team struggling for form of late, was also determined to improve on a dismal run of one win in eight. Sergei Sapego tied it up midway through the first period, claiming his first goal of the season. Then, late in the session, Taylor Graovac converted the visitor’s first power play of the day to give the visitor the lead.

The Belarusian cause was hampered by penalties in the second period, and Nikita Mikhailis took advantage of his team’s second power play to tie the scores. Mikhailis, voted into his first All-Star team on Monday, potted his 15th goal of the campaign.

That was the end of the scoring, although the home team had a small advantage in regulation and a more substantial one in overtime. And, in the shoot-out, Vey potted the winner as Nikita Boyarkin stopped all four of the attempts he faced.

A Damir Zhafyarov goal was enough to give Torpedo its first win in four years in Ufa. However, the club’s leading forward was not the day’s key player — visiting goalie Pyotr Kochetkov made 36 saves to preserve the win in a goaltending duel.

A week ago, the teams met in Novgorod and Salavat Yulaev came out on top in another tight affair. That 2-0 victory relied heavily on 39 saves from Juha Metsola, seasoned by a couple of goals from Sakari Manninen. Today, though, the roles were reversed. Torpedo was hampered by the absence of Swedish defensemen Daniel Zaar and Theodor Lundstrom, while the home team was missing Markus Granlund and Philip Larsen. 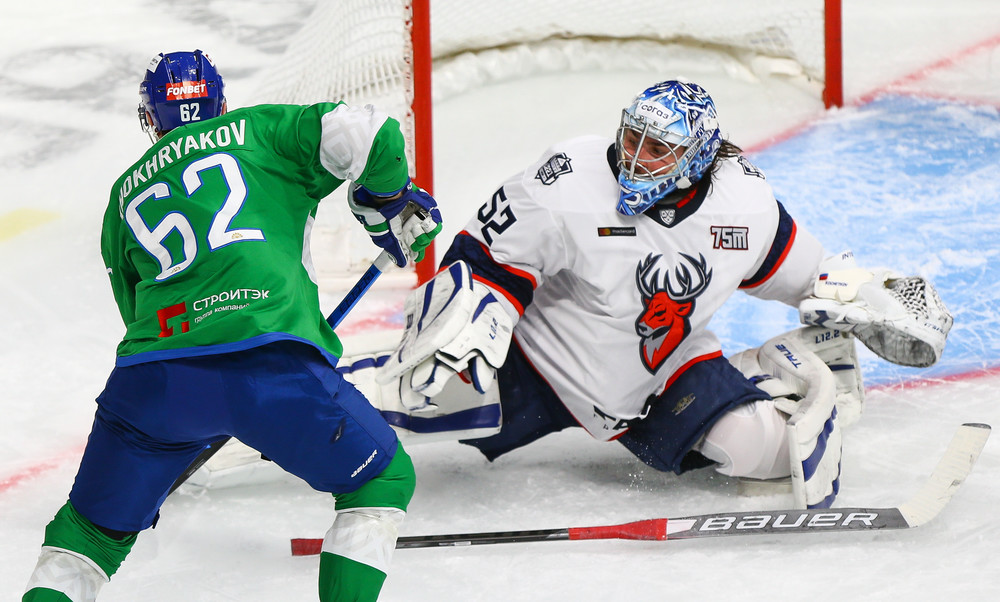 The opening frame saw Salavat Yulaev on top, lifted by a couple of power play chances, and Kochetkov pulled off good saves to deny Sergei Shmelyov and Viktor Tikhonov. The home team continued to press in the middle stanza, but Manninen lost out in his rendezvous with Kochetkov as the game remained goalless through 40 minutes.

The breakthrough came in the 49th minute, just as Teemu Hartikainen returned to the ice after a penalty. As the gate opened, Ziyat Paigin fired in a point shot and Zhafyarov was on the spot to steer the puck past Metsola. From that point on, the visitor adopted a ‘what we have, we hold’ strategy to close out the win. Not even a late ‘too many men’ penalty could disrupt Torpedo’s progress to a fifth win in seven games.

SKA storms back to winning form

SKA’s nightmare run came to an end in emphatic style with the Army Men recording a first victory in seven games at Neftekhimik. Head coach Valery Bragin handed a recall to Kirill Marchenko, who played his last two games in the VHL with farm club SKA-Neva. In that time, the young forward picked up three points and earned a return to the first team in Nizhnekamsk.

That decision paid off: Marchenko scored two goals in the first period, putting the visitor in front after Yegor Popov’s early marker gave Neftekhimik hope of recording a fourth straight success. Both of Marchenko’s efforts were assisted by Zakhar Bardakov, who was making his first KHL appearance since Sep. 29. He, too, was recalled to the first team after a couple of games in the VHL. Ivan Morozov, another player assigned to the farm club over the weekend, also picked up a helper as Marchenko led his team’s turnaround.

They were not the only player elevated from SKA-Neva who made an impact today. Grigory Gryaznov, a 21-year-old defenseman, made his first appearance of the season in Sunday’s 1-3 loss at CKA. In that game he did enough to remain with the senior team and today he got his first KHL goal. It came at the start of the second period when he fired home Nikita Gusev’s feed from behind the net. 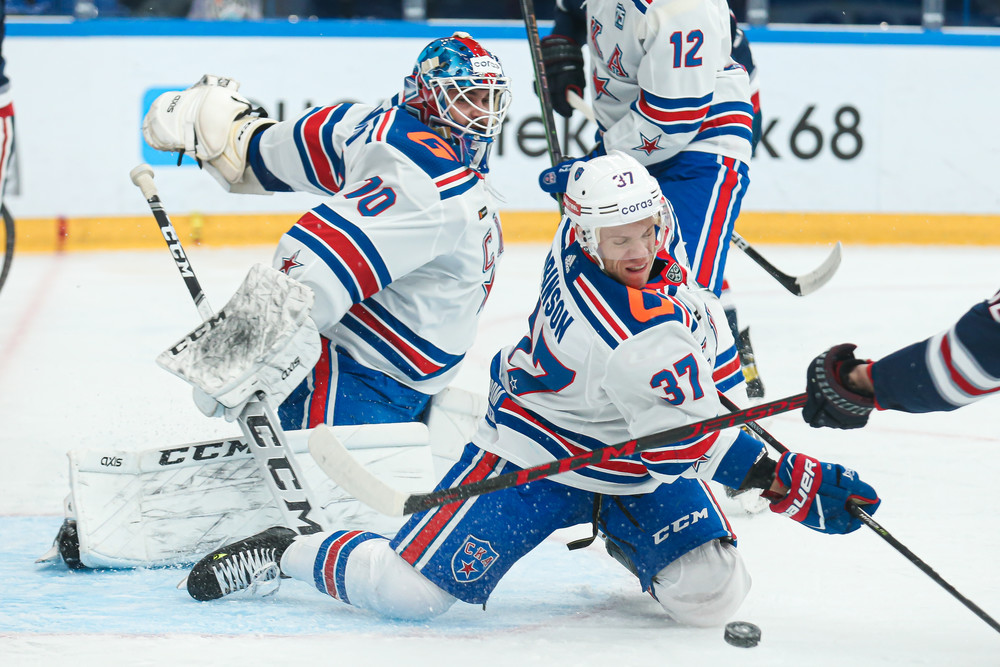 After SKA’s youngsters got the team on the road to victory, the old guard had its say. Anton Burdasov added a fourth goal in the 33rd minute before setting up Andrei Kuzmenko to make it 5-1. Both goals came on the power play, and both had assists from Gusev.

Gusev then got a goal of his own early in the third, moving him to 14 (2+12) points since he rejoined the club in mid-October. And Bardakov kept up the contribution from the younger players, making it 7-1 in the 48th minute off assists from Marchenko and Morozov. Beleaguered, Neftekhimik sent understudy goalie Frans Tuohimaa into the game. It was the Finn’s first outing since Oct. 24 but it did little to improve matters for the home team. A 5-on-3 power play came to nothing for Neftekhimik, then Kuzmenko potted his second of the game.

Late on, there was some small consolation for Neftekhimik to cheer. A second two-man power play saw Sergei Kuptsov pull a goal back in the 58th minute — but by then the game was long gone.