Flying Finns and a homecoming king — the KHL week in review

These are high times in Helsinki, with Jokerit moving to the top of the Western Conference this week. And, with forwards hitting the headlines, Vitaly Kravtsov came back to Traktor and produced a stunning game-winner on his latest KHL debut.

Sunday’s 4-1 win in Riga put Jokerit clear of SKA at the top of the Western Conference. The Finns are looking impressive this season and have won their last four games on the road. Much of that recent success has been triggered by consistent scoring from Niklas Jensen (7 points in the last four games) and Brian O’Neill (five points in four games). Both were on the scoresheet in Latvia as Jokerit moved to 42 points for the season. The current run also featured Marko Anttila’s 100th point in the KHL.

Severstal on the march

Typically, Severstal is one of the Western Conference outsiders. This season, though, Cherepovets is bidding to break into the top four. Andrei Razin’s team is currently in fifth, level on points with fourth-placed Dynamo and one behind CSKA in third. The Steelmen also have a game in hand on the teams above them. It’s a position bolstered by a club record run of nine successive victories, culminating in Saturday’s 5-2 demolition of league leader Metallurg. Four first-period goals made the difference in that game, while goalie Konstantin Shostak is in the top five for SV% this season.

Vasily Kravtsov is back in Chelyabinsk — and didn’t he make sure everyone knows about it? The Rangers prospect is on loan to Traktor once again and wasted no time showing his skills in his team’s overtime win at Barys. Kravtsov upstaged a hat-trick from the home team’s Nikita Mikhailis with a sensational game-winner, slipping the puck through his own legs to create the space to attack, then finding the net with a backhanded finish worthy of deciding any game.

Canadian forward Jordan Weal was starting to attract unwelcome commentary after failing to score a goal since his KHL debut back on Sep. 2. The quickest way to answer those critics, of course, was to score some more — and Weal did just that on Saturday. His four goals against Avtomobilist tipped the scales in his team’s favor in a 5-4 overtime win. Weal is the second player this season to score four in a game: Jokerit’s Jordan Schroeder did the same in an 8-0 win over Dinamo Riga last month.

Mikhailis and Weal were not the only players pot hat-tricks this week: we’ve seen five trebles in four days. Torpedo’s Ivan Chekhovich and Damir Zhafyarov both potted three in wins over Dinamo Minsk and Sochi respectively, while CSKA’s Mikhail Grigorenko had a treble in a high-scoring clash with Vityaz.

CSKA’s hard-working forward Sergei Andronov played his 536th game for the club this week. His appearance against Vityaz beat the record set by Alexei Kasatonov back in 1997 and makes the center an indelible part of the Army Men’s history. 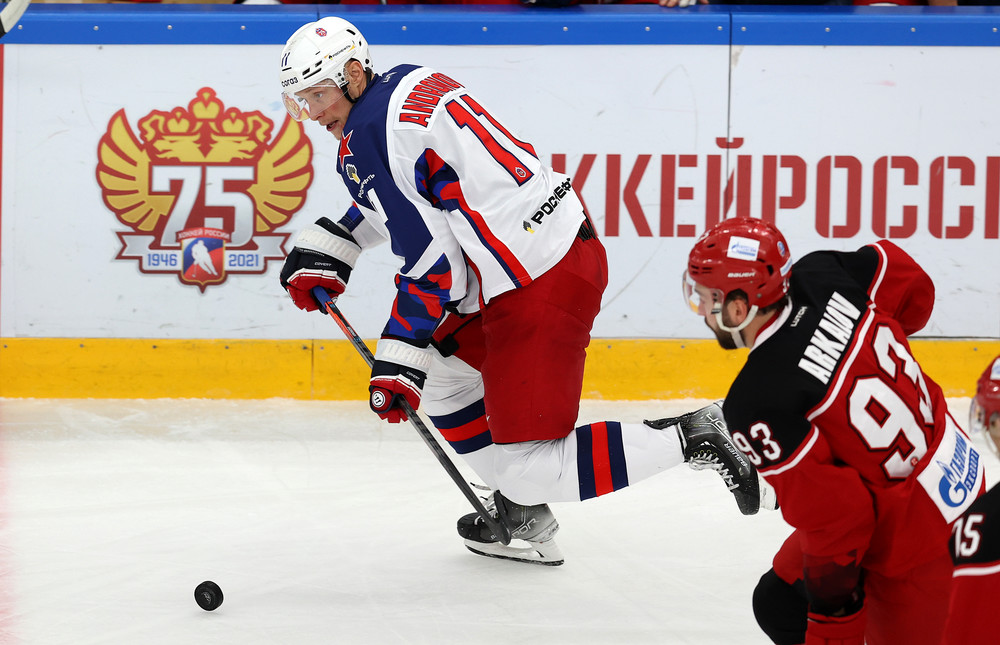 American forward Dan Sexton is back where it all began for him in the KHL after returning to Neftekhimik this season. And life in Tatarstan is proving profitable for the skilled forward: this week he picked up his 181st point for the club, making him Nizhnekamsk’s most productive player in the KHL era. Also in the past week, club captain Marat Khairullin collected his 100th KHL point.

Dec. 3 sees the KHL break new ground when the KHL World Games go to Dubai. Avangard’s regular season game against Ak Bars will take place in the Emirates, and tickets went on sale last week. Fans can get tickets for the game from https://ice-dubai.com/, prices range from $41-110.

Tickets are on sale for the KHL World Games in Dubai