Vladislav Kamenev was the difference maker for CSKA, collecting three points as his new team blanked SKA 4-0. Damir Zhafyarov also had a good day, hitting a hat-trick in Torpedo’s win over Sochi. Dynamo enjoyed a 3-1 success at Avangard, Amur battled back to win in a shoot-out at Lokomotiv and Admiral moved off the foot of the table after squeezing past Vityaz.

Vladislav Kamenev returned to haunt his former club with three points in CSKA’s home victory over SKA. Kamenev, 25, was traded from one Army club to the other earlier this season after seven games and one assist for SKA. The center, who returned to the KHL last season after five years in North America, did much of the heavy lifting in Sunday’s big game, setting his new team on the road to success against the Western Conference leader.

Kamenev opened the scoring after 12 minutes, rifling home a shot from between the hash marks after Mikhail Grigorenko won possession behind the net and Konstantin Okulov picked out a defense-splitting pass from the corner. Within two minutes, he had another from almost the same spot. Grigorenko was involved again as the CSKA power play clicked to convert its first opportunity of the afternoon. 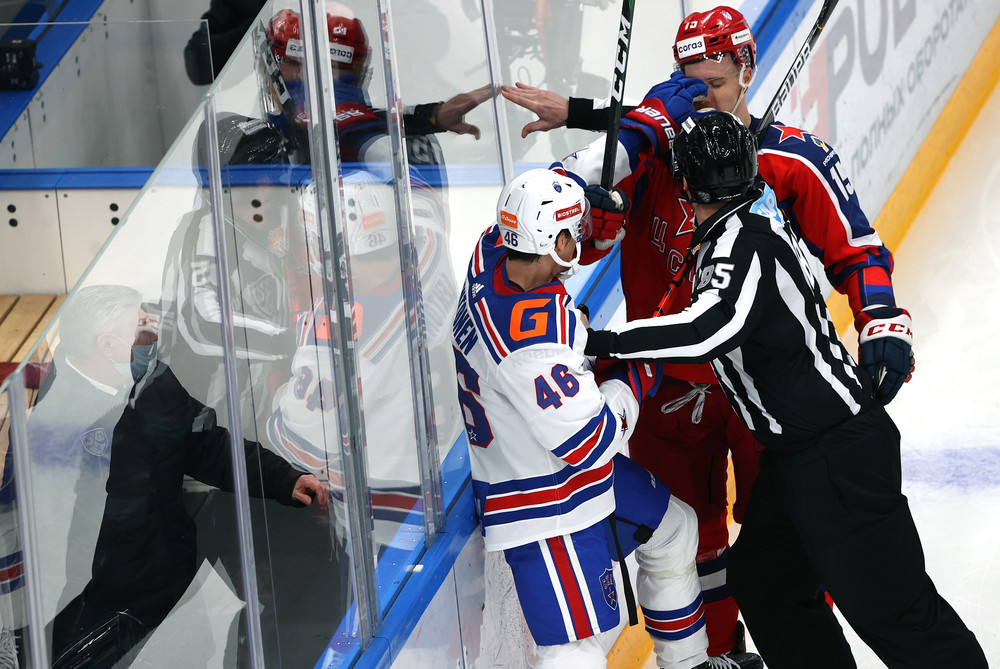 Although the home team held the lead, SKA was generating more offense: in the first period it outshot CSKA 8-4 and the middle frame produced similar numbers at 7-3. However, there were few big scoring opportunities among them and Adam Reideborn was able to keep his goal intact.

Midway through the final stanza CSKA added a third when Lucas Wallmark scored on the power play. This time Kamenev was among the assists, while defenseman Nikita Nesterov picked up his second point of the game. And the home power play delivered another goal late on when Joakim Nordstrom got to the slot to convert Maxim Sorkin’s feed. That was Nordstrom’s first goal in only his seventh appearance of the season.

Reideborn finished with 17 saves for his shut-out, but this was all about CSKA’s clinical finishing and effective power play.

Torpedo continues to enjoy its current home stand, posting a third successive victory with an aggregate goal differential of 12-3. Damir Zhafyarov was the star man today, grabbing a hat-trick to blow away lowly Sochi and lift David Nemirovsky’s team to within one point of the playoff spots.

Zhafyarov started work early, opening the scoring with a power play goal after 96 seconds. Ivan Mishchenko soon cancelled that out for the visitor, but after that the game was largely one-way traffic. Torpedo regained the lead towards the end of the first period when Zhafyarov scored again.

In the second period, there were fewer scoring chances but Torpedo still managed to add a third goal through Kirill Urakov in the 35th minute. And the home team confirmed its superiority in the final frame as Zhafyarov helped Theodor Lennstrom make it 4-1 before finishing the job with a power play goal in the 51st minute.

Dynamo picked up a morale-boosting victory at Avangard to return to the top four in the West, but the defending champion’s indifferent run continues. The Hawks had lost four out of six ahead of this game and, faced with an opponent on a similar run, was unable to improve its fortunes.

The early stages were something of a game of coaching cat-and-mouse. Bob Hartley set up a reconfigured first line of Alexander Dergachyov, Nikita Komarov and debutant Yegor Serdyuk. That combative trio was clearly intended to disrupt the hugely effective Shipachyov line, which tends to dominate Dynamo’s scoring. In response, Alexei Kudashov bided his time before deploying his superstars and the early exchanges resulted in both benches trying to second guess the other.

Once play settled down, this was an even battle. However, it wasn’t until the 26th minute that we saw an opening goal, scored by Stanislav Galiyev for the visitor. That goal came shortly after an injury to Ilya Kablukov forced Hartley to reshuffle his forwards once again. 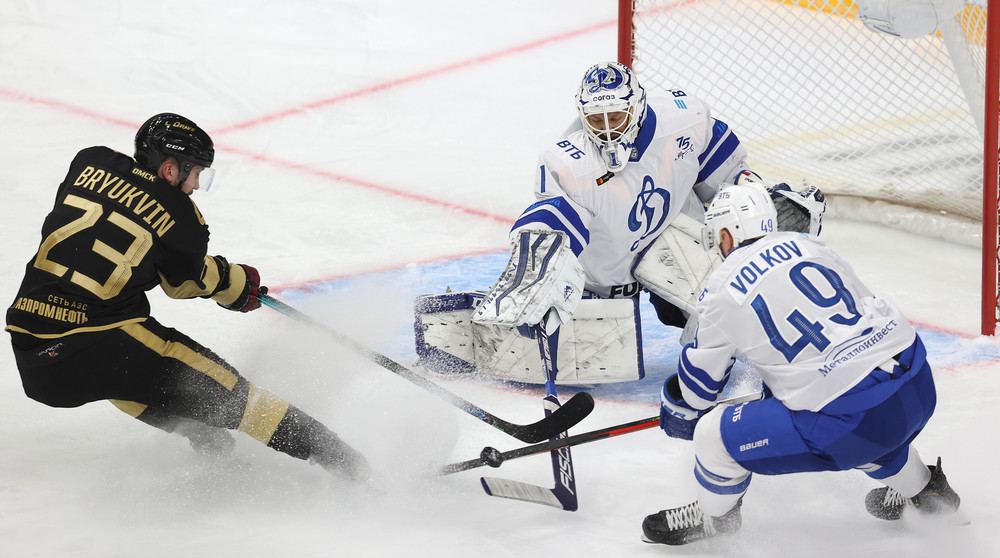 Early in the third period, Dynamo’s Andrei Sergeyev found himself bang out of luck. First, he sat for a tripping minor. After watching his team-mates kill that penalty, Sergeyev returned to the game only to unwittingly divert the puck into his own net from a Dergachyov effort.

However, it wasn’t long before the Blue-and-Whites were back on top with the best goal of the game. There seemed to be little danger when Ivan Muranov picked up a loose puck at the top of the right-hand circle, but the visiting forward whipped in a devastating wrister that evaded Alexei Emelin’s stick and found the tiniest of gaps over Simon Hrubec’s shoulder to reach the top corner and make it 2-1. Late in the game, Anton Wedin’s empty net goal sealed the win for the Dynamo; the Hawks’ latest defeat sees them seven points adrift of the top four and only four clear of the battle for eighth place.

Tigers fight back from 0-3

Amur battled back from 0-3 to derail Lokomotiv and move into a three-way tie with Sibir and Neftekhimik at the sharp end of the race for a playoff spot in the East. The Railwaymen, meanwhile, missed the chance to improve on seventh place in the West after carelessly throwing away a winning position.

Initially, it all seemed so easy for the home team. Two goals from Yegor Korshkov sandwiched an Artur Kayumov effort and Loko led 3-0 before the midway mark. Not even a 3-on-5 penalty kill late in the first period seemed to distract Igor Nikitin’s men in the early stages of the game.

But when Michal Jordan pulled a goal back for Amur late in the second period, alarm bells started ringing. Lokomotiv proved unable to reassert itself and the Tigers saw their chance. Alexander Kuznetsov reduced the deficit still further and, with eight minutes left, Ivan Nikolishin got the tying goal. Overtime was a lively affair, with both goalies kept busy, but neither team able to settle the outcome.

The shoot-out mirrored the game that preceded it. Kayumov and Korshkov scored for Lokomotiv, but Amur was not beaten. Nikolishin and Radan Lenc converted their attempts before Vladimir Galuzin settled an entertaining contest when he scored the 10th effort to give the visitor the verdict.

Sailors off the foot of the table

A hard-fought victory for Admiral lifted the Far East team off the foot of the KHL standings. The visitor snapped a six-game losing streak but, in truth, this was not a game to live long in the memory.

Vityaz, despite its inconsistent form this season, can boast two of the KHL’s top forwards in Niko Ojamaki and Daniel Audette. Admiral’s task was to keep them quiet, and the Sailors did so admirably. The pair were held to just three shots on goal between them, and Nikita Serebryakov faced just 20 shots across 65 minutes of play. He stopped all of those, and remained unbeatable in the shoot-out to lead his team to victory.

Offensively, Admiral has struggled for goals throughout the season and today was no exception. Despite firing in 36 shots at Ilya Ezhov, the visitor could not find a way through until that shoot-out. Then, the Ushenin twins converted their attempts and that was enough to clinch the verdict.