A bumper day of KHL action might have started relatively slowly with CSKA edging a 2-1 win at Admiral while Amur and Sibir had shut-out wins. But it soon turned into a feast of goals. Torpedo and Neftekhimik shared nine, with the home side coming out on top. Severstal and Vityaz both hit five on the road, at Barys and Dynamo Moscow respectively. Salavat Yulaev and Lokomotiv played out a 3-3 tie before Ufa won in a shoot-out and Spartak topped Kunlun 4-2.

CSKA recovered from two straight losses to pick up the points on its long trip to Vladivostok. Admiral came into this game boosted by back-to-back wins but was unable to improve on the 1-2 loss it suffered in the capital less than two weeks earlier.

The visitor had slightly the better of the play in the first period but struggled to create many clear-cut chances. What the Army Men did fashion tended to involve Maxim Sorkin: early in the game, the youngster missed a great opportunity, but he redeemed himself midway through the frame when he tipped Artyom Sergeyev’s shot into the net. However, Admiral tied it up in the 15th minute when Libor Sulak’s point shot brought the Czech defenseman his second goal in as many games.

In the middle frame, the home team continued to play cautiously and waited for CSKA to over-commit itself going forward. However, the key error came when Maksim Matushkin fouled and Sergei Plotnikov took advantage of the power play to restore his team’s lead. That lead might have increased in the third period when Alexander Popov hit the bar, but 2-1 was enough to give the visitor the verdict.

Dinamo continues to stumble in the East

Dinamo’s impressive form this season has hit a bump in the Far East. After going down 2-3 at Sibir on the start of this road trip — the first time in 11 outings that the Bison failed to gain at least a point — game two brought a 0-3 loss at Amur, which snapped its four-game skid.

There was little work for Bolshakov or his opposite number Evgeny Alikin in the opening stages, and the opening goal was a somewhat freakish deflected effort fired in by Ruslan Pedan from behind the goal line. That marker changed the balance of the game and the Tigers capitalized with a good start to the second period and a second goal courtesy of Alexander Sharov. Dinamo was struggling to get its game together and rarely looked like troubling Alikin. A power play goal from Ivan Nikolishin wrapped up the scoring.

Traktor stumbles on the road

Traktor missed the chance to join Metallurg at the top of the table while Sibir recorded back-to-back wins after its four-game losing streak. The visitor had Albert Yarullin and Vladimir Tkachyov back in action after the missed the hard-fought home win over Avtomobilist last time out, but despite refreshing his team, Anvar Gatiyatulin could not easily escape the after effects of a crowded schedule.

Sibir had to kill an early penalty but after the game settled into an even battle. It wasn’t until late in the second period that we saw the opening goal, when former Traktor man Alexei Kruchinin set up Nick Shore during a 5-on-3 power play.

Midway through the third period, Alexander Sharov came face-to-face with Roman Will in the Traktor net and calmly outwitted him to double Sibir’s lead. Subsequently there was a similar chance for Oleg Li to kill off the game completely, but this time Will got the better of the duel and kept his team in contention until the closing seconds. At the other end, though, Harri Sateri was in fine form to stop 29 shots and give his team the win.

With four wins in its previous five games, Severstal is changing perceptions of its team. For much of the season, the Steelmen have been noted for tight defense and limited scoring. However, a 6-5 overtime win over Neftekhimik challenged that notion and recently there have been signs that Andrei Razin’s men are ready to release some of the shackles on their forwards. Today, in Kazakhstan, Barys was the victim of that.

Barys adopted a high press in this game but found it difficult to convert puck pressure into scoring chances. Joni Ortio was the busier goalie in the first period and was beaten late in the frame by Nikita Guslistov after he shut down a home attack and went on the counter, supported by Adam Liska. The middle frame saw a second goal for the visitor. Barys successfully killed a penalty for the first time in the game, but shortly after that Jakob Stenqvist doubled Severstal’s lead.

However, the game was still alive and when Arkady Shestakov pulled one back on 44 minutes, Barys had genuine hopes of salvation in the closing stages. Severstal, though, had other ideas. The last 10 minutes brought three goals for the visitor with Igor Geraskin, Robert Rooba and Vladislav Kodola sealing an impressive win.

Salavat Yulaev rallied from 1-3 after 56 minutes to take in-form Lokomotiv to overtime — and finished the job in a shoot-out to settle an entertaining clash in Ufa. This game pitted together two teams in good form: the host had won its last three, while under Igor Nikitin the Railwaymen are showing the kind of results expected of them after a strong summer recruitment campaign.

Initially, it was Nikitin and his players who had the better of this game. The visitor went with a new-look, high-octane offensive line of Reid Boucher, Maxim Shalunov and Artyom Anisimov and that trio was on the ice when Boucher intercepted a loose puck in the Ufa zone and fired home the opening goal in the 17th minute. Early in the second, Anisimov and Shalunov combined as Pavel Kraskovsky doubled the lead and the home team looked to be in trouble. 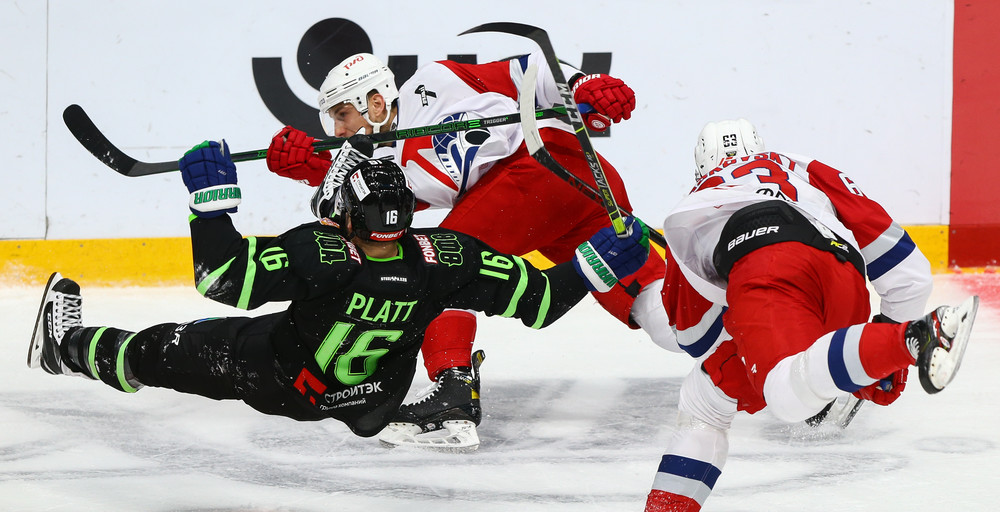 Salavat responded at the start of the third when Pavel Koledov pulled a goal back but with barely four minutes left an Artur Kayumov goal looked to have given Lokomotiv an assailable lead at 3-1.

Then came the late drama. Sergei Shmelyov pulled one back, then Teemu Hartikainen further embellished his legendary status in Bashkortostan by potting the power play goal that saved the game with 62 seconds left to play. The Finn unleashed an instinctive one-timer off Sakari Manninen’s feed and found the net just as time was running out for his team.

That sent us to overtime, where neither team could force a winner even though Lokomotiv finished on the power play after Alexander Kadeikin was penalized 25 seconds from the end. In the shoot-out, Manninen claimed the winner to complete Salavat Yulaev’s fightback and extend its winning run to four games.

Torpedo went goal crazy in the second period, putting the puck in the net five times without reply to settle the outcome of this game. Marek Hrivik led the home scoring with two goals and an assist as David Nemirovsky’s team improved to four wins from five.

There was little evidence of that offensive explosion in the opening frame, which finished with the teams locked at 1-1. Hrivik opened the scoring after just 13 seconds, but his team was unable to build on that fast start. Marat Khairullin tied it up seconds before the intermission.

Then everything changed. Torpedo fired in five goals in almost exactly six minutes, ending all questions about the final result. Perhaps surprisingly, they all came at full strength: Neftekhimik stayed out of the box, but could not keep the opposition out of its net. Andrei Belevich started the storm, Hrivik potted his second of the night and Maxim Fedotov made it 4-1 on 26:55. That persuaded Neftekhimik to send Frans Tuohimaa into the net in place of Alexander Sudnitsin. However, two goals and two minutes later, Sudnitsin was back after Tuohimaa had to retrieve efforts from Theodor Lennstrom and Damir Zhafyarov.

Then, after the 29th minute, Torpedo’s onslaught came to an end. The home team even spurned a penalty shot chance — Fedotov denied by Sudnitsin. Late in the game, Andrei Chivilyov grabbed a short-handed goal and Khairullin grabbed his second of the encounter, but that was a mere consolation for the visitor.

Spartak hit three power play goals to defeat the Dragons, extending its winning streak to four games. For Red Star, this was a sixth successive defeat.

The Red-and-Whites took the lead midway through the first period when Emil Pettersson redirected Tim Heed’s point shot past Jeremy Smith. However, Kunlun was left frustrated — earlier in the move a loose pass from Jori Lehtera almost sent Tyler Wong on the counter, only for the puck top drop favorably for the home team. 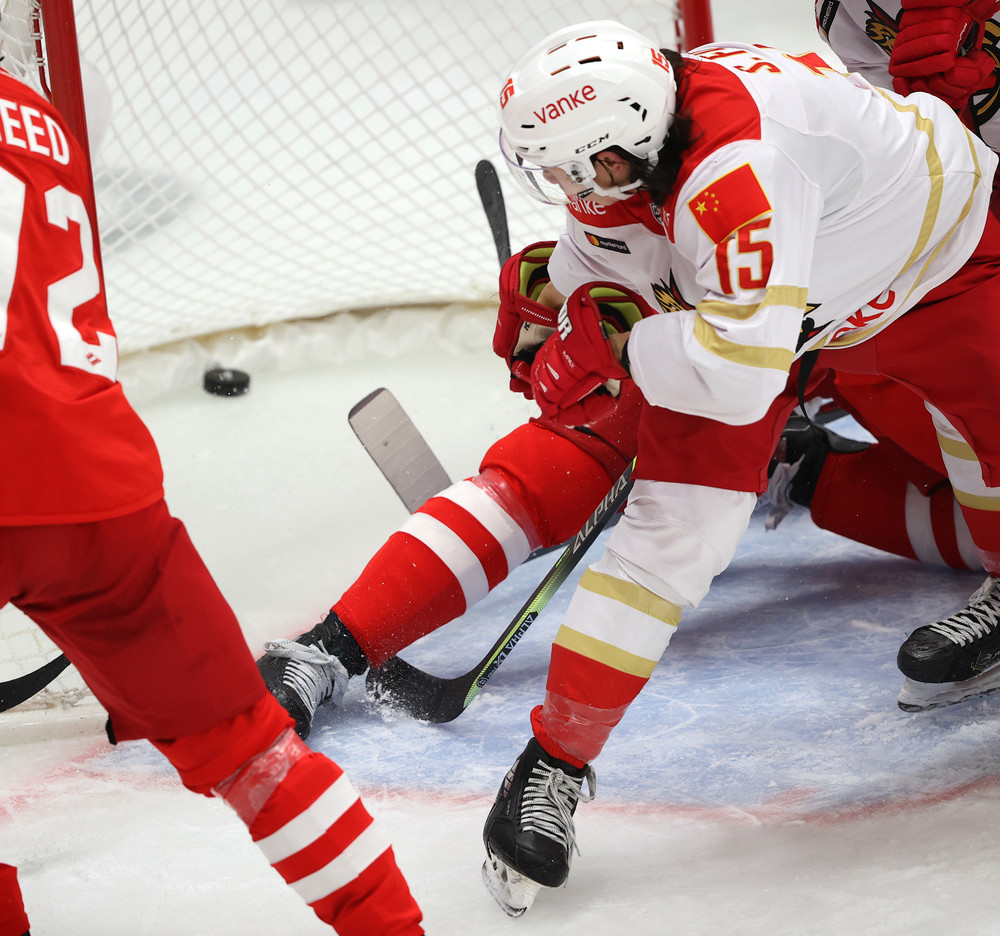 Early in the second, Spartak extended its lead through Dmitry Kugryshev before Brandon Yip got the visitor on the board with a power play goal at the other end. Alexander Khokhlachyov saw his solo rush halted by Smith but it wasn’t long before another home PP saw Dmitry Vishnevsky’s piledriver edged home by Andrei Loktionov.

Red Star replied with a goal at the start of the third from Wong, but Lehtera got his team’s third PP tally of the game to maintain a comfortable cushion. There was an anxious moment for the host late on when Zach Yuen redirected Nikita Khlystov’s shot into the net, but the video review ruled that his stick was high and the play was whistled off.

Much like Neftekhimik’s second-period hammering at Torpedo, Dynamo blew this game in the middle frame. Tied at the first intermission, Vityaz scored four unanswered goals in the second period on its way to an impressive road win.

The form guide pointed to a home win, with Vityaz winning just one of its past 10 games. When Eric O’Dell converted a fifth-minute power play, that prediction seemed even safer. However, Nikita Goncharov tied it midway through the first and, in the second half of the second period, Vityaz ran amok. 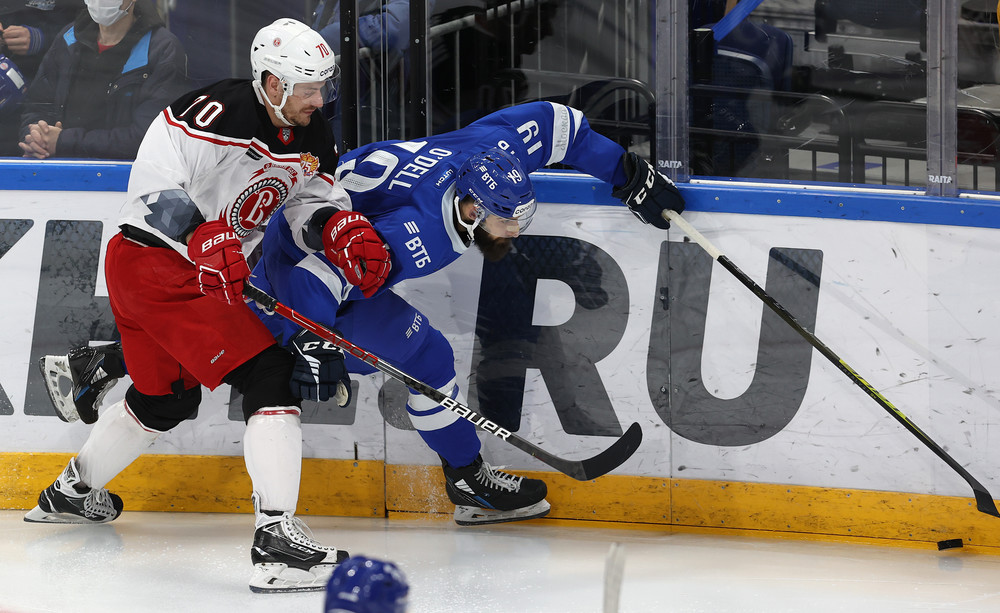 It started with Alexander Yaremchuk on 30:55. Then came a Finnish flourish. A penalty on Ivan Muranov helped Valtteri Kemilainen make it 3-1. Another power play goal soon followed from Niko Ojamaki, and Kemilainen added a fifth on 37:58.

The game was gone, but Dynamo managed a consolation goal in the third through Vladislav Yefremov. However, there was no way back as Vityaz moves to 18 points for the season, still six adrift of a playoff spot.