A 5-2 win for Salavat Yulaev put an abrupt halt to Metallurg record 14-game streak. That also gave Traktor the chance to move clear at the top of the table with a 5-3 victory over Dynamo Moscow. Elsewhere, we saw one-goal games as Lokomotiv edged Kunlun Red Star, Dinamo Minsk got past Admiral and Ak Bars and Barys won in overtime against Amur and SKA respectively.

Metallurg’s club record winning streak is over. After 14 successive victories, Magnitka fell to a heavy loss at home to Salavat Yulaev. The visitor halted its own three-game losing streak and demonstrated that there are gaps in Metallurg’s hitherto impressive defense.

Given that this game brought together two of the teams with the best defensive records in the KHL this season, it was a surprise to see the goals fly in during the first period. Ufa went ahead on the first power play of the game, with Sergei Shmelyov finishing off a neat exchange of passes by shooting under Vasily Koshechkin’s pad. Then the home team made two bad errors in the space of 30 seconds and was punished first by Pyotr Khokhryakov then Philip Larsen and Salavat led 3-0 midway through the opening frame. Metallurg called a time-out and got back in the game immediately, as Linus Hultstrom made it 1-3 with his first goal of the season. 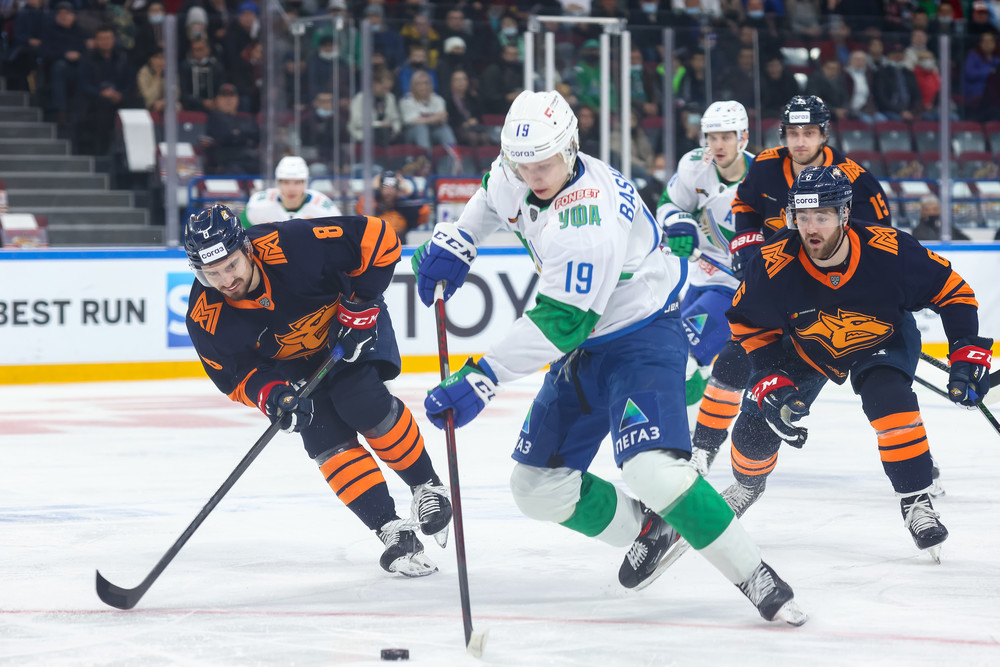 Hultstrom did not wait long to get his second of the campaign, striking at the start of the second period to make it a one-goal game. And the home team dominated the next 10 minutes of play but could not find a tying goal. Alexander Sharychenkov held firm in the visitor’s net and Ufa finished the middle frame strongly. Another defensive error saw Artyom Minulin present Shmelyov with possession and Alexander Kadeikin finished off with a shot as he fell on the slot. Next came a power play goal from Teemu Hartikainen, taking the scoreline into comfortable territory for Salavat Yulaev.

In the final frame, Metallurg struggled to create chances. Late in the game, Koshechkin was called to bench during a home power play, but it was telling that the goalie found himself on and off the ice in the final three minutes of play as his team was unable to build up a long spell of attacking play.

Metallurg defeat gave Traktor the opportunity to move out in front in the KHL standings and the Chelyabinsk team took its chance with a solid victory over Dynamo Moscow. The home team posted its eighth successive win while the visitor suffered a fifth loss in six games as its bright start to the season runs into difficulty.

The game began with a flurry of early penalties, but it wasn’t until the 15th minute that we saw a power play bear fruit. Andrei Pedan sat for holding and Teemu Pulkkinen needed just 20 seconds to convert that chance against his former club. However, the KHL’s leading scorer, Vadim Shipachyov, tied it up before the intermission. 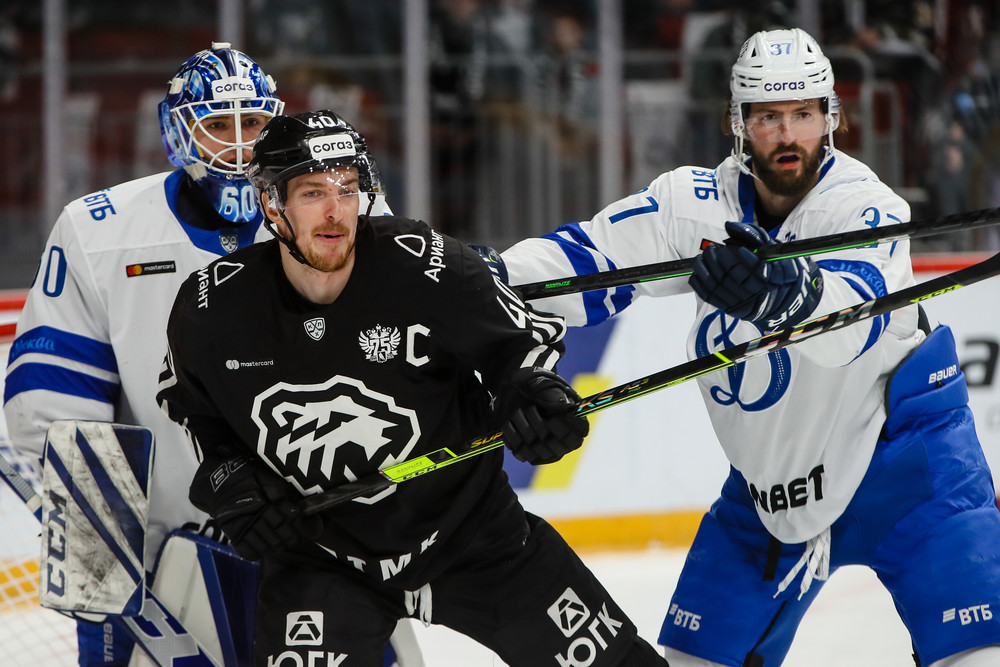 The middle frame belonged to the home team. Traktor enjoyed the better of the play and converted that superiority into a 3-1 lead. Ilya Karpukhin and Lukas Sedlak found the net and the home team seemed to be in control.

However, Dynamo hit back in the third. Dmitry Rashevsky scored from close range on the power play — Shipachyov among the assists once again — before Alexander Petunin tied the scores at 3-3 in the 55th minute.

That demanded a quick response from Traktor, and Dynamo’s ill-discipline cost it once again. Rob Klinkhammer was assessed a slashing minor and just six seconds later Sergei Kalinin restored the home lead. Any doubts were extinguished when Pulkkinen put his second of the game into an empty net and a failed bench challenge left Dynamo to recover two goals with a player in the box and barely a minute left on the clock.

A strong first period set Lokomotiv on track to beat Red Star — but the Railwaymen were left hanging on at the end as the Dragons mounted a brave fightback.

The formbook always favored Loko here, but recent games have seen Kunlun improve: the Chinese team picked up at least a point in each of its last three outings. However, it seemed unlikely that the sequence would continue after a dominant first-period display from Loko brought goals from Artur Kayumov, Yegor Korshkov and Alexander Polunin. The three-goal cushion was entirely deserved, with Lokomotiv firing in 21 shots at Jeremy Smith and allowing just four at the other end.

That was a gentle return to action for home goalie Daniil Isayev, making only his second appearance of the season. But in a second period littered with penalties and enlivened by a fight between Brandon Yip and Alexander Yelesin, he found himself with rather more to do. Late in the stanza, a power play effort from Ryan Sproul got Red Star on the scoreboard.

That looked like little more than a consolation when Maxim Shalunov began the third period by shooting the puck to the slot, from where it deflected into the net off Yegor Averin. But the Dragons hit back at once through Luke Lockhart’s well-placed wrister, then survived a scare when a Lokomotiv goal was whistled off for a high stick following a video review. With 31 seconds left, Tyler Wong made it 3-4 — his second late goal in as many games — but that was as close as his team got to salvation.

Dinamo recorded an eighth win in nine games thanks to a double from Tyler Graovac. The Canadian took his tally to 14 (4+10) points for the season to help his team bounce back after Friday’s loss at Spartak.

Graovac started early, opening the scoring in the third minute. He converted a feed from Mattias Tedenby to give Dinamo the lead, and in doing so made it clear that the duo’s position on the third line was in name only. Admiral responded through Mikhail Patrikeyev’s first KHL goal, but almost immediately Malte Stromwall restored the home lead.

The second stanza was goalless, but Graovac was on target at the start of the third. This time, his partnership with Tedenby hit the jackpot on the power play and Minsk had a two-goal advantage. However, penalty trouble for Dinamo saw Admiral get back in contention thanks to Artyom Gareyev’s effort. From that point on, the home team managed the game calmly to its conclusion, while its ability to launch swift and dangerous counter attacks meant that visiting goalie Nikita Serebryakov could only be called to the bench for the final 23 seconds of play.

Ak Bars made hard work of getting past Amur with Dmitry Yudin’s overtime goal finally putting the Tigers away in Kazan.

The home team made an ideal start, with Kirill Panyukov opening the scoring on two minutes after the Amur defense struggled to get the puck out of its zone. However, Ak Bars was unable to build on that bright start; the first period was evenly contested and there was no further scoring before the intermission.

By the time the host managed to get a tighter grip on play, Roman Lyubimov had already brought Amur level. The forward had nine games without a goal for Ak Bars last season, but found the net in Kazan tonight when he fired home from the deep slot off a David Tomasek feed. However, Steven Kampfer restored the home advantage late in the second period.

Amur began the third period by killing a penalty, but once back to full strength the visitor got back on level terms thanks to Ivan Nikolishin’s goal. Ak Bars was much the stronger side in the third, but could not find a winning goal in regulation and even spurned a penalty shot at the start of overtime when Dmitry Kagarlitsky was hooked down on his way to goal and Jordan Weal failed to convert the penalty shot. A minute later, though, Kagarlitsky turned provider as Yudin arrived at the point and surprised everyone with a one timer that whistled past Evgeny Alikin to win the game.

For the second game in a row, Nikita Mikhailis produced a shoot-out winner for Barys, giving the Kazakh team some breathing space in the battle for a top eight position in the East.

On Friday, Mikhailis scored during his team’s game at Kunlun Red Star, then got the shoot-out winner. Today he did the same again in St. Petersburg to settle an absorbing contest in Barys’ favor. Both teams led in regulation as they traded six goals but Joni Ortio also emerged with great credit after blunting SKA’s increasingly threatening offense in the third period and in overtime.

The first period produced just one goal, with Kirill Savitsky putting Barys in front when he executed a neat turn and shot in front of Alexander Samonov’s net. The first period stats narrowly favored the visitor, but SKA showed plenty of scoring menace. 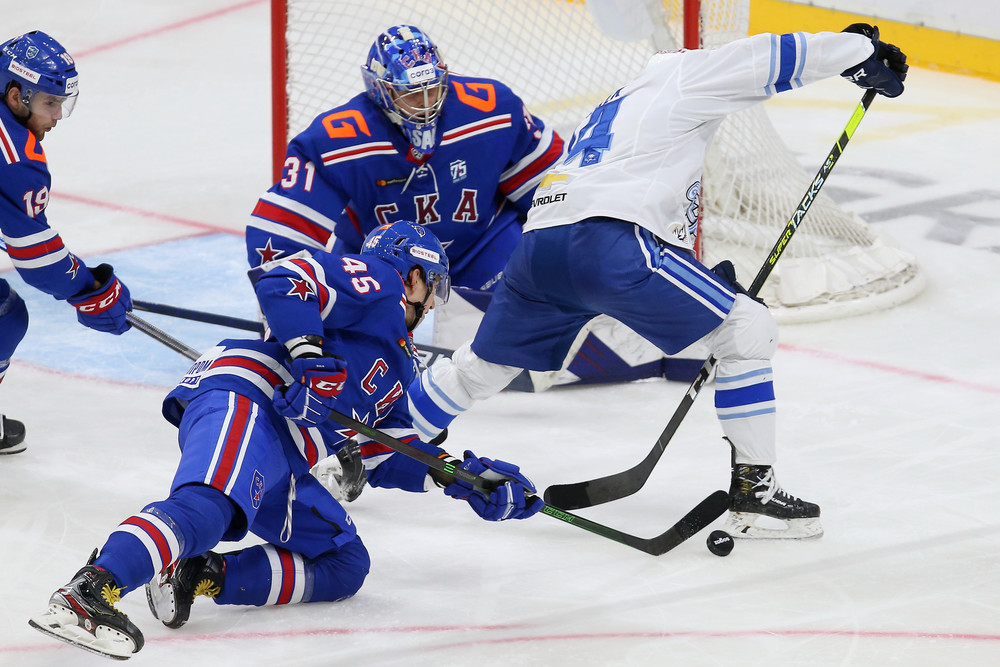 Early in the second period, SKA’s new forward got his first goal since signing for the club last week. But it was not Nikita Gusev, the high-profile trade of the season so far, who opened his account. Instead, it was Valentin Zykov, playing in the KHL for the first time this season after moving to North America as a teenager back in 2012/13, who found the net. Emil Galimov’s shot bounced off the 26-year-old’s stick and gave him a goal on his KHL debut after he featured as an unused 13th forward in Wednesday’s 5-3 win over Dynamo Moscow.

Barys regained the lead on a power play goal from Mikhailis, but Anton Burdasov soon brought the teams level and Galimov put SKA up for the first time in the game in the 35th minute. The lead did not endure until the second intermission, though, as Roman Starchenko scored on the PP to make it 3-3.

The fact that it stayed that way until the shoot-out was substantially down to Ortio. SKA outshot Barys 11-3 in the third and 4-1 in the extras, but the Finn stood firm to keep his team in the game. Then, he stopped Gusev in the first attempt of the shoot-out and successful efforts from Jakob Lilja and the ever dangerous Mikhailis gave the visitor the verdict.