Import forwards made a big impact in Friday’s KHL action. Traktor’s Tomas Hyka scored twice to help his team to victory over Sochi — that’s seven straight wins for Chelyabinsk now. Then Stephane da Costa had 2+1 as Avtomobilist rallied from 1-3 to defeat Salavat Yulaev in overtime. Two more games went beyond the 60-minute mark as Torpedo beat Amur in overtime and Barys needed a shoot-out to see off Kunlun Red Star. CSKA picked up a 2-1 home win over Admiral.

Traktor posted a seventh successive win but left it late to overcome Sochi. On its return to Chelyabinsk after a trip to the Far East, the home team welcomed back defenseman Lawrence Pilut after injury. Sochi rested forward Martin Bakos, whose place on the second line was taken by youngster Andrei Bakanov.

The home team got an early lead when Nick Bailen set up Tomas Hyka in the sixth minute, but Sochi was firmly in this game and turned the scoreboard around midway through the first period. Amir Garayev converted a 2-on-1 break to tie it up, then within a minute Nikita Feoktistov gave the visitor the lead.

Sochi has a good record in Chelyabinsk, where it hadn’t lost since 2015, and once in front the visitor was able to defend that lead until the third period. Even three power plays in quick succession at the start of the middle frame could not show Traktor the way past Magnus Hellberg in the Leopards’ net. However, in the third period fatigue caught up with Sochi and Traktor forged ahead. Hyka tied the game with his second of the night, then in the closing minutes Teemu Pulkkinen and Nikita Tertyshny gave the home team the win — and left visiting head coach Andrei Nazarov lamenting his team’s lack of game management.

Two goals from Stephane Da Costa helped Avtomobilist come from behind to defeat Salavat Yulaev. It was a third straight loss for the team from Ufa, which held the lead for much of regulation.

The visitor opened the scoring in the fifth minute on a goal from Andrei Zubarev after Pyotr Khokhryakov’s drop pass set him up. Avto responded in the second period when Alexei Makeyev tied the scores — Da Costa among the assists here — but Salavat appeared to have the game under control with two goals early in the third. Stepan Sannikov made it 2-1 with a close range finish after good work from young Danil Alalykin, then the Finnish combination clicked once again as Markus Granlund converted a Teemu Hartikainen feed. 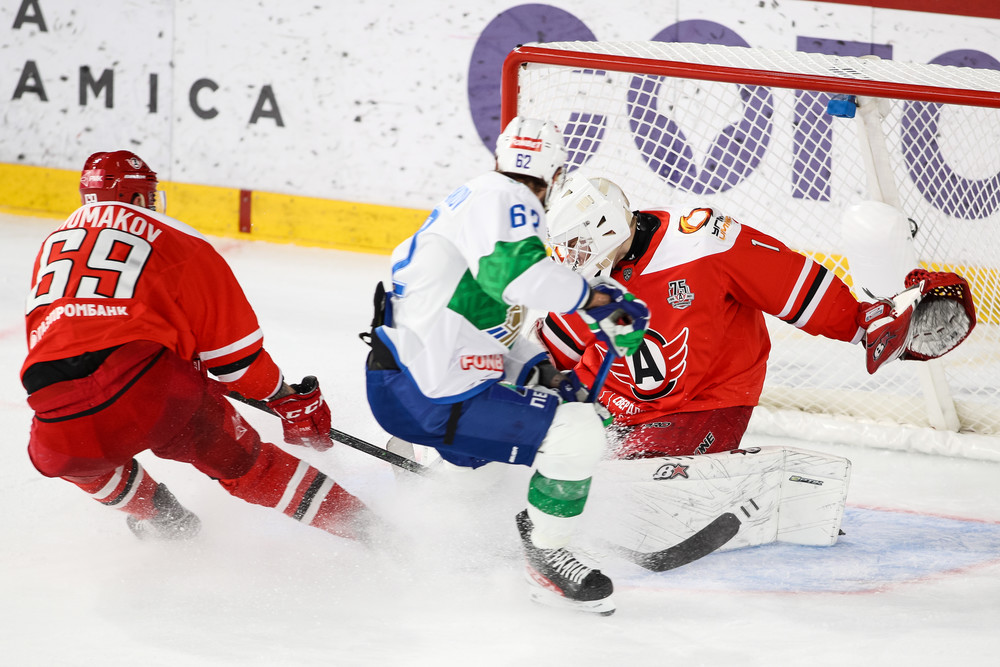 However a home power play offered Avtomobilist a route back into the game. Stanislav Bocharov converted that chance to make it 2-3, then barely a minute later Da Costa tied it up with good individual work after he batted down Sergei Shumakov’s up-and-under in center ice.

And, after Makeyev hit the piping in overtime, the Frenchman delivered the coup de grace with one second left on the clock, walking the puck into the net after an incisive home counter attack.

CSKA bounced back from Wednesday’s 1-5 loss against Amur, but the Army Men were not entirely convincing against another Eastern Conference outsider.

The home team had by far the better of the play in the opening session, but only had one goal to show for its dominance. Maxim Sorkin, who scored the consolation goal against Amur, struck again here. The youngster executed a neat finish to score on Nikita Serebryakov after Nikita Nesterov forced a turnover in center ice. 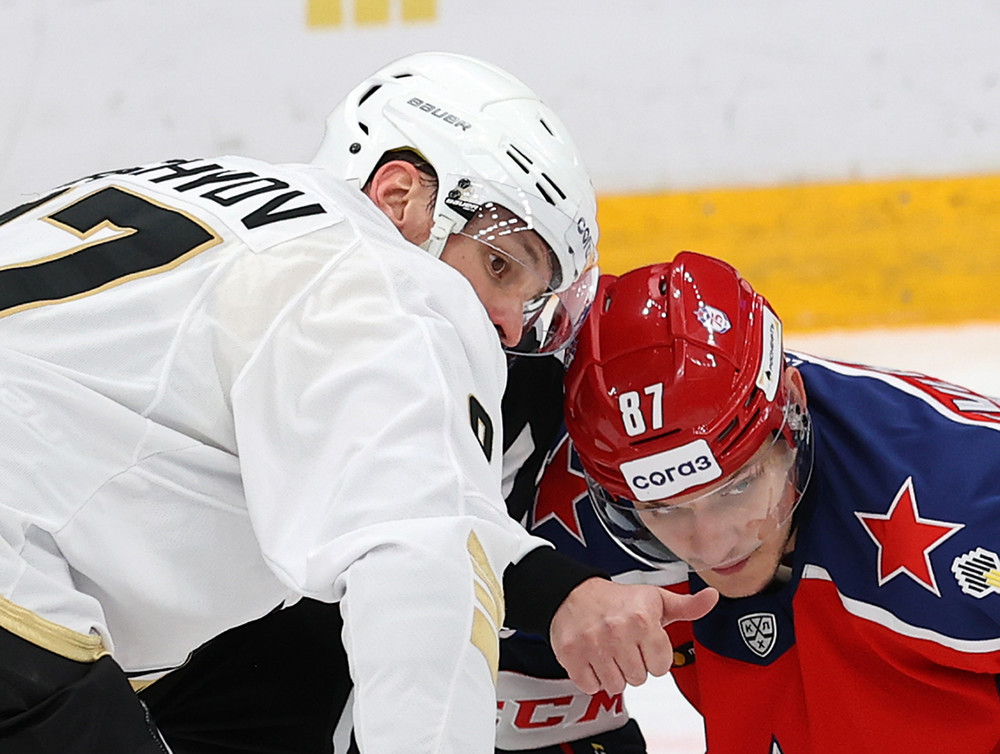 At the start of the middle frame, Andrei Svetlakov doubled the lead when he fired home a Konstantin Okulov feed and it looked as if CSKA had the game under control. But Admiral struck back late in the session when a rare foray forwards saw Andrei Obidin outpace Anton Slepyshev and set up Rihards Bukarts to make it a one-goal game.

In the third period, Admiral came into the game rather more. However, the Sailors could not find a way past Adam Reideborn and slipped to a 1-2 loss.

Torpedo made a winning return home after its recent trip to Moscow Region, but needed to go all the way to defeat an improving Amur team.

It took half an hour for the first goal to arrive, but when it did the scorer was no surprise. Kenny Agostino has been in great form lately, and this was his fourth goal in five appearances. However, that was not enough to settle the outcome, with Amur always a threat. The Tigers tied it up midway through the third thanks to Dmitry Arkhipov and forced the game into overtime.

In the extras, though, the visitor ran into penalty trouble. Sergei Tereshchenko followed Roman Lyubimov into the box and with a two-man advantage, Torpedo secured the win. Marek Hrivik’s feed from the doorstep did not quite sit up for Damir Zhafyarov to capitalize, but when the puck returned to the Slovak international, he was well-placed to stuff it home and win the game.

Barys needed a shoot-out to see off Kunlun Red Star after allowing a goal on 58:10. The visitor also failed to convert a power play in overtime, but took the verdict thanks to Nikita Mikhailis and Curtis Valk’s successful attempts in the shoot-out.

Barys got ahead in this game early in the second period through Mikhailis. However, the visitor could not finish Red Star off, with home goalie Jeremy Smith making 44 saves in 65 minutes of play. 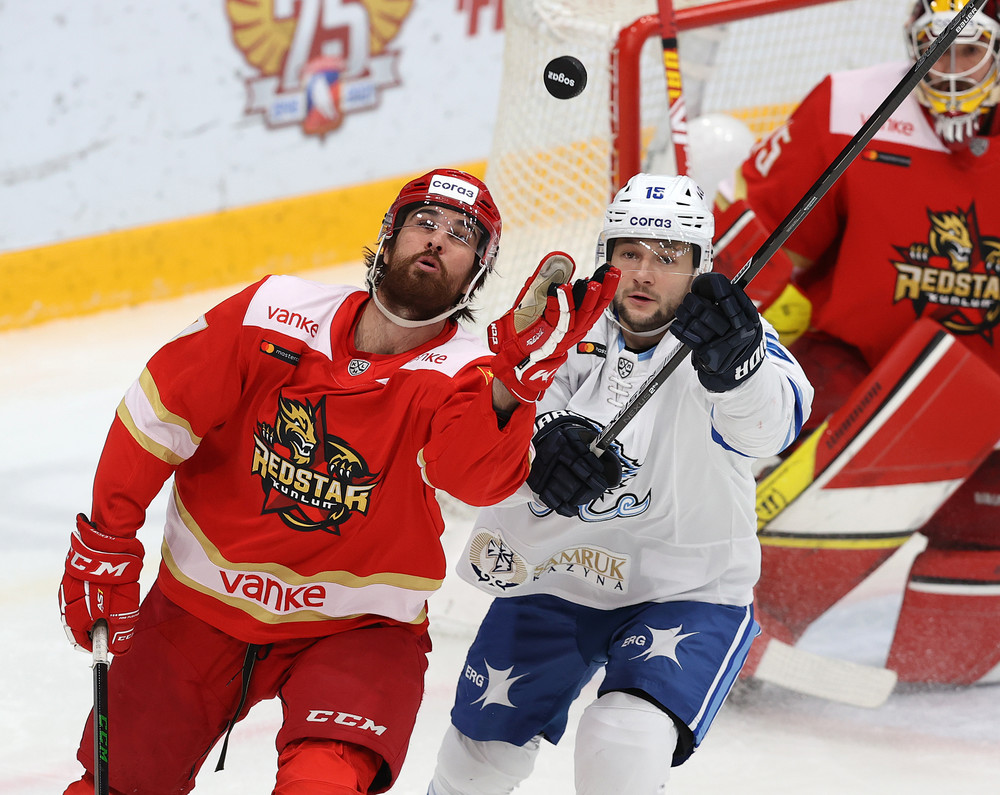 The home offense also had its moments, and might have tied the scores almost immediately when a rebound from behind the net was forced home, only for a video review to rule that the Dragons’ attempt was unlawful. But it wasn’t until the closing moments that Red Star managed to tie the scores, with Tyler Wong potting his fourth of the season to send the game to overtime.

In the extras, Barys got a power play but failed to take advantage, taking a delaying the game bench minor to cancel out its extra man.