Joonas Kemppainen was the star in Wednesday’s big game. The Finn scored twice in SKA’s 5-3 win over Dynamo Moscow. CSKA suffered an unpleasant surprise, going down 1-5 at home to Amur. Avangard posted a third straight win, defeating Barys 4-1, and there were successes for Sochi, Torpedo and Lokomotiv.

Sochi rallied from two goals down to secure its second win in three games with a shoot-out success in Yekaterinburg. Vasily Glotov started the visitor’s fightback and finished the job with the decider.

Avtomobilist made a good start to the game and built a solid lead on the back of two quick goals midway through the first period. Sergei Shumakov opened the scoring and Patrice Cormier soon doubled the advantage, chasing Maxim Tretyak from the net after 10:22. However, Glotov reduced the arrears in the 15th minute, converting a counter attack to make it 1-2.

Sochi proceeded to dominate the second period, and that pressure led to a defensive error which handed Nikita Feoktistov the tying goal. Then, in the third, both teams held the lead. Artyom Nikolayev put Sochi ahead, Ryan Spooner and Stepan Khripunov turned the scoreline around before Bogdan Yakimov tied it up with eight minutes left. Overtime could not separate the teams, but Glotov was the only player to succeed in the shoot-out as Sochi edged the verdict.

The surprise result of the day came in Moscow, where Amur handed CSKA a heavy home defeat. The Tigers came into the game at the foot of the KHL standings after back-to-back losses at home to Traktor but produced their best performance of the season here.

The first period saw Amur dominate the play. The visitor outshot CSKA 17-6 and turned two of those efforts into goals. First came Radan Lenc, who needed just three seconds to convert the first power play of the game after eight minutes. Ironically, Amur’s PP was the worst in KHL, with a strike rate of just 10% prior to this game. Late in the opening frame, Amur doubled its lead with a goal from Dmitry Arkhipov off Alexei Volgin’s feed from behind the net. 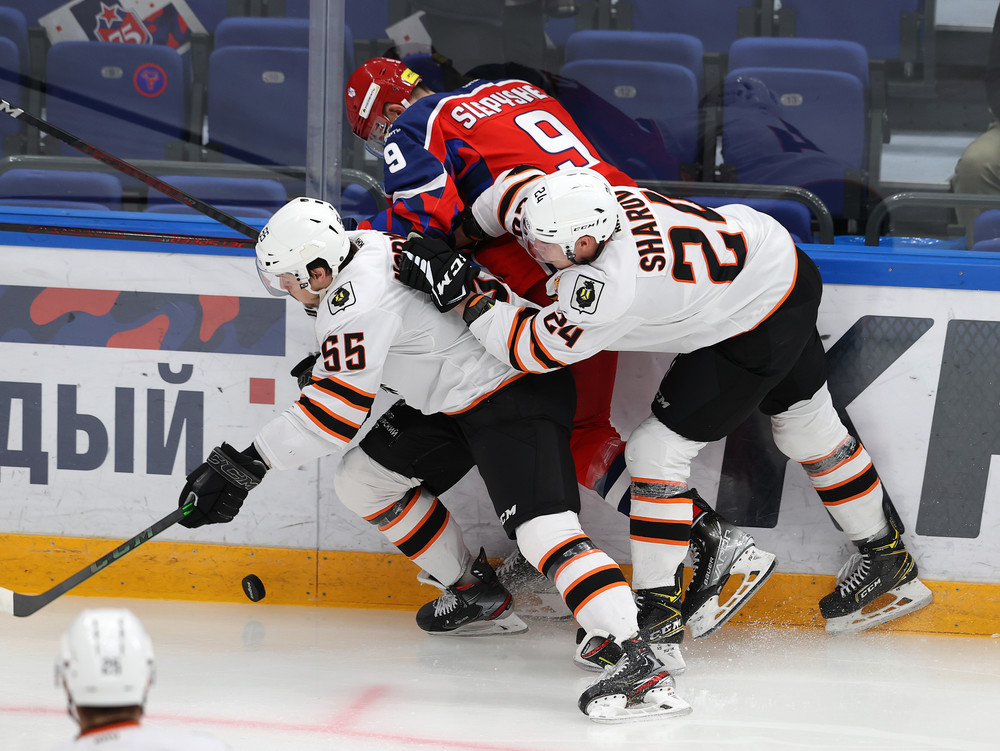 Early in the third, the visitor scored two more. First, a well-worked combination saw Ivan Nikolishin make it 3-0, then another power play brought a goal from Vladimir Butuzov. Volgin collected his third assist of the night on that play.

The Army Men had the puck in the net late in the middle frame, but the effort was whistled off for a high stick. By the time the host managed a legitimate goal, in the 58th minute, it was too late for Maxim Sorkin’s effort to have much impact on the outcome. Amur ensured it had the final say with an empty net goal from David Tomasek.

Maxim Shalunov’s overtime marker was enough to lift Lokomotiv past Severstal following a 1-1 tie in Yaroslavl.

The forward needed two bites at the cherry to grab his game-winner. First he went surging clear on the breakaway but fired his shot wide of Dmitry Shugayev’s net. However, the Severstal defense got in a tangle when trying to clear from behind the target and Shalunov intercepted a wayward pass before stuffing the puck home from close range.

Earlier, Lokomotiv dominated the first period but failed to find a way past Shugayev. Then, in the second, the Steelmen forged ahead when a well-worked counter attack saw Jakob Stenqvist shoot home from between the hash marks. Four seconds before the intermission, Lokomotiv tied it up with a goal from two of the less heralded players on the team. Maxim Beryozkin, still awaiting his first KHL goal, chased down the play behind the net and emerged with the puck to set up Mikhail Belyayev for his first of the season.

In the third period there were few chances, although Loko had the better of what was created, and the game moved into overtime. Once there, it took Shalunov just 96 seconds to conjure a decisive goal.

Kemppainen settles clash of the titans

There was no immediate return for Nikita Gusev after SKA announced his signing yesterday, but the Army Men had plenty to celebrate with a convincing victory in his absence. Two goals from Joonas Kemppainen paced his team to a comfortable win over Dynamo.

However, SKA had to come from behind in this game, with the visitor getting the lead in the 18th minute thanks to Dynamo’s rising star Dmitry Rashevsky. He was credited with the opening goal after his pass, whipped in from the right, was deflected past Lars Johansson. That ended the Swede’s three-game shut-out streak but his team was level at the intermission thanks to a power play goal from Ivan Morozov. 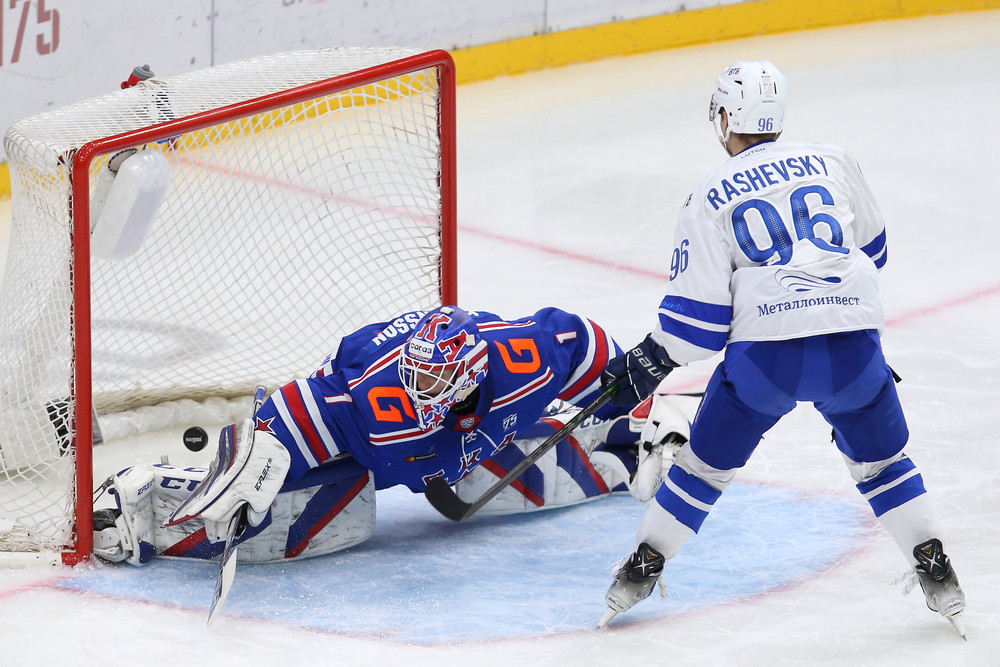 In the second period, another home PP saw Anton Burdasov make it 2-1. However, Rashevsky struck again to tie it up after 25 minutes. The Kemppainen got to work. First, the Finn steered home a Burdasov feed from close range. Then, within a minute, he had his second when Vladislav Tsitsyura led a rush and picked out the center at the far post to make it 4-2.

Dynamo got back into the game on 48 minutes when Rob Klinkhammer’s power play goal reduced the deficit. SKA challenged the call, citing interference on Johansson, but the video review upheld the on-ice verdict and put the home team on the penalty kill. However, Dynamo could not get back on level terms and Evgeny Ketov’s empty net goal settled the outcome.

Avangard posted a third straight victory with an assured performance at home to Barys. Corban Knight was at the heart of his team’s success, having a hand in all four goals.

The game came one week after Barys defeated the Hawks in Nur-Sultan. Neither team made significant changes from its most recent roster, though, although Nikita Boyarkin replaced Joni Ortio in goal for Barys. He had a busy first period, stopping 19 shots as Barys adopted a cautious approach to the game. 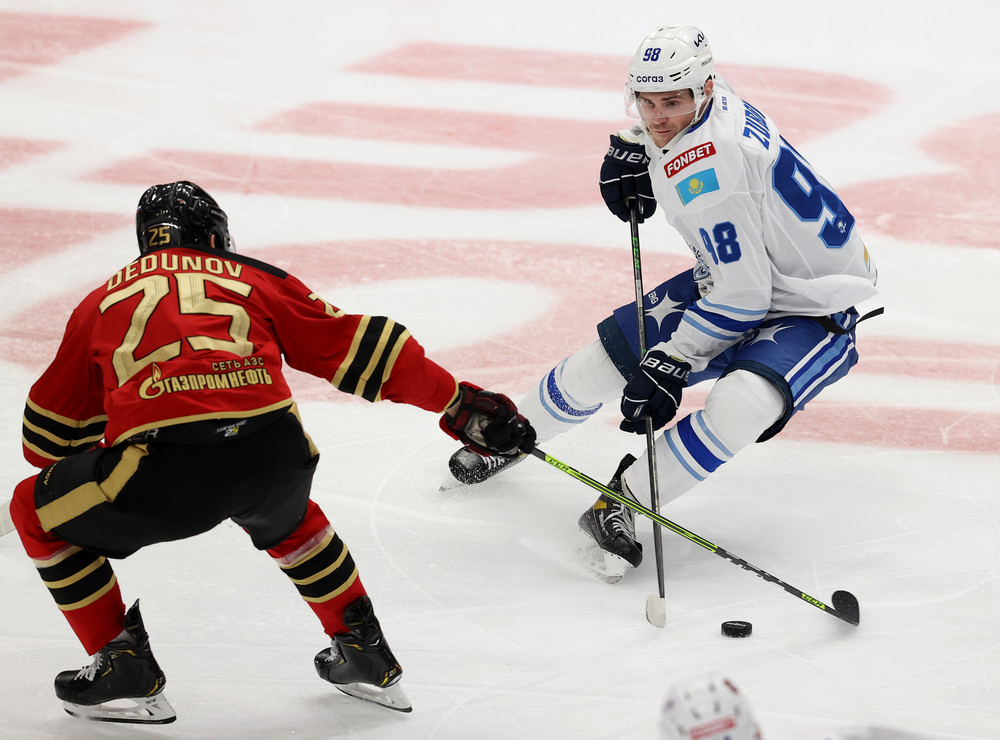 However, it was not until the middle stanza that the home team broke the deadlock. Midway through the session, Knight opened the scoring on the power play with something of a DIY effort. He picked up possession beyond the goal line, spotted a gap in the defense and darted into in before beating Boyarkin. Seven seconds before the intermission, Knight added an assist as Alexei Emelin doubled the lead.

A Nikita Mikhailis goal midway through the third offered Barys some hope, but within a minute that was squashed when Alexei Bereglazov made it 3-1. Again, Knight had an assist on the play. Then, late in the game, another home power play saw Alexander Dergachyov fire home Knight’s pass to the inside of the circle.

Vityaz slumped to a sixth consecutive loss as Torpedo ended its two-game slump with a win in Podolsk.

After a goalless opening frame, the home team got ahead late in the second thanks to a power play goal from Valtteri Kemilainen. However, in the last minute of the middle frame, Torpedo tied the scores on a Kenny Agostino effort.

Midway through the third, the visitor took control with two quick goals. Ilya Fedotov made it 2-1 in the 51st minute, and just a minute later Ivan Chekhovich added a third.