Metalllurg’s 13th win in a row saw Ilya Vorobyov’s team match a club record in the KHL era. Lokomotiv also kept up its good recent form with a 3-1 win over Western Conference leader Dynamo Moscow. CSKA won the derby against Spartak for the second time this season, with Sergei Plotnikov getting the only goal. Traktor scored twice in the last five minutes on the way to a shoot-out win at Admiral, Avangard defeated Avtomobilist thanks to a double from Vladimir Bryukvin and Severstal snapped a four-game losing streak with a shoot-out success at Torpedo.

Traktor produced a late rally to salvage its game in Vladivostok and secure a shoot-out win.

The Sailors came into the game with signs of improvement — despite dropping to the foot of the standings, the team had two victories in its previous three games. And the host made a confident start, scoring twice in the first four minutes to chase Traktor starter Emil Garipov from the game. And those efforts from Alexander Shevchenko and Dmitry Lugin weren’t the end of the visitor’s problems: Anvar Gatiyatullin challenged the second goal, was overruled and saw his team take a bench minor.

After that, things could only get better for Traktor. It took some time, but midway through the second period Vitaly Abramov halved the deficit after the officials took a second look at his shot and ruled that the puck had crossed the line before it cannoned back into play. However, Lugin’s second of the game restored the home team’s two-goal advantage before the second break.

It all turned around late in the third. A power play goal from Albert Yarullin on 55:43 breathed new life into the game, then Lukas Sedlak tied it up with 55 seconds to play after Roman Will returned to the bench in favor of an extra attacker. Will was kept busy in overtime after a too many men penalty put Traktor in trouble. But he won four of his five duels in the shoot-out as Teemu Pulkkinen got the decider. The teams meet again tomorrow.

Metallurg posted a 13th successive victory to equal a club record sequence in the KHL era. Today’s opposition, Sochi, had just snapped a six-game losing streak with newly appointed head coach Andrei Nazarov getting his first win in an overtime success against Dinamo Riga. But despite the gulf between the teams in the standings, this was a trickier assignment than Magnitka might have expected.

Ilya Vorobyov tweaked his winning roster and handed a KHL debut to Ilya Kvochko, one of the top prospects in Russia’s junior program. He also had goalie Artyom Zagidulin back on the list as back-up to Vasily Koshechkin. But there was little change in the way the team started the game, piling up the pressure early on and opening the scoring in the fourth minute through Andrei Chibisov. 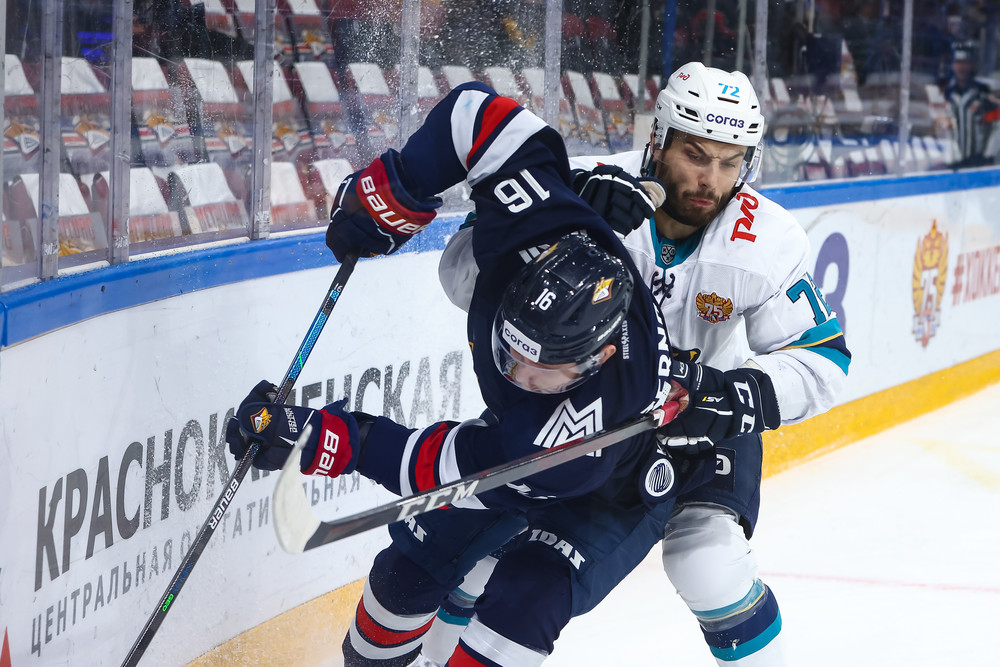 However, for all the home team’s dominance, a second goal was hard to find. It wasn’t until the 38th minute that Nikolai Goldobin doubled the lead as a combination of good goaltending from Magnus Hellberg and uncertain finishing from the home offense kept Sochi alive in the game.

At the start of the third, Denis Zernov hit the post but Metallurg’s pressure ultimately led to a goal at the other end. Hellberg beat away a testing shot from Goldobin and triggered a counter-attack that ended with Bogdan Yakimov halving the deficit. With one goal to find, Sochi could risk pulling Hellberg in the closing moments in search of a tying tally. However, Chibisov’s empty-netter wrapped up the home win with 13 seconds left to play.

The second edition of this Moscow derby was again won by the Army Men. However, after a high-scoring 5-3 success last month, paced by Sergei Plotnikov’s hat-trick, this was a much tighter affair.

Plotnikov, though, was the difference maker once again. He got the opening — and indeed only — goal late in the first period. Although CSKA made the stronger start to the game it was Spartak that created the better chances, until a power play chance saw Plotnikov redirect Nikita Nesterov’s shot into Oscar Dansk’s net. 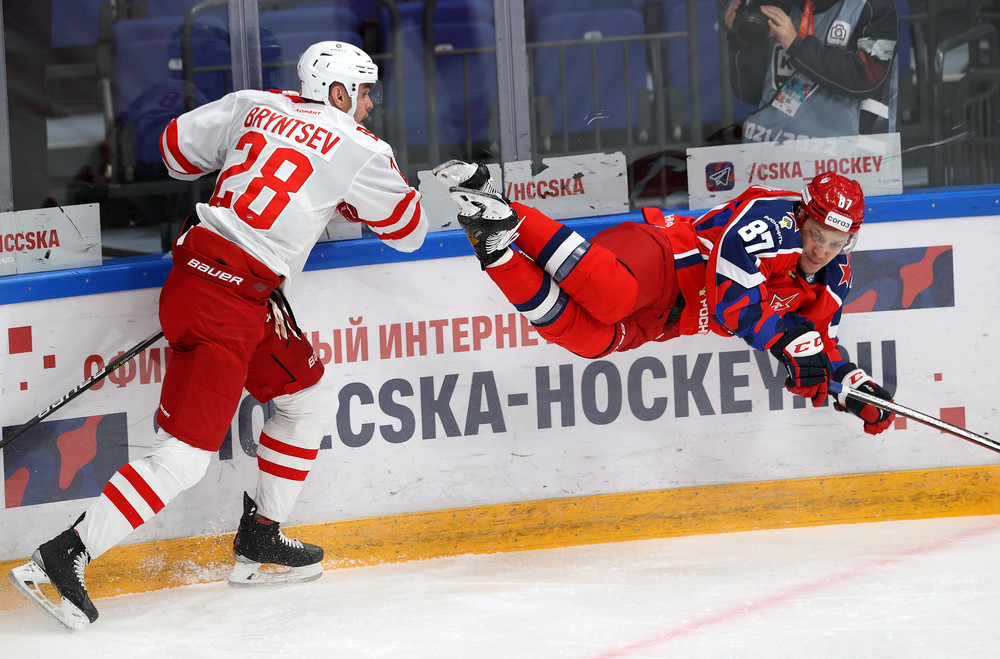 In the second period, Spartak had a power play chance of its own but could not take advantage and had to kill two penalties of its own to stay in the game. After that evenly matched frame, the visitor raised the tempo in the third but Boris Mironov’s men struggled to create clear cut chances. Adam Reideborn made 25 saves to record a shut-out, but was rarely called upon to produce something spectacular.

Igor Nikitin’s impressive start to life at Lokomotiv continues. Victory over Dynamo makes it five wins from six for the incoming head coach — and this one came against the Western Conference leader.

The opening goal came in the eighth minute when Alexander Polunin by firing home a Pavel Kraskovsky feed from between the hash marks. In a session of few clear chances, the Railwaymen held that lead to the intermission then extended it early in the second. Yegor Korshkov was the scorer, beautifully executing his finish on a two-on-one break.

That forced Dynamo to inject a touch more pace into the game, but big moments were still hard to come by. It wasn’t until a power play in the third that the visitor got back into the game when Rob Klinkhammer finished off a well-worked move. However, former Dynamo defenseman Denis Barantsev soon stepped up to restore the two-goal cushion with a booming shot from the top of the circle.

Barantsev took a penalty late in the game after shooting the puck out of the rink. However, Loko’s problems were eased when Andrei Sergeyev was called for simulation at the same time. Dynamo tried to force the pace during the 4-on-4 sequence, with Alexander Yeryomenko benched to allow an extra skater onto the ice. But there was no way to trouble Eddie Pasquale in the home net and when Andrei Pedan went to the box with 32 seconds left, he took the visitor’s hopes of a recovery with him.

This battle of two Canadian coaches was settled by an unlikely hero. Vladimir Bryukvin, a summer signing for Avangard from Dynamo Moscow, has not had the brightest of starts with his new team. Indeed, his goal in Saturday’s 5-2 win over Spartak was only his second of the season — and Spartak was the only team to fall victim to him.

Today, though, he doubled his tally against Avtomobilist with a quickfire pair that turned this game around and gave the Hawks back-to-back wins. That comes after a dismal run of four losses in five that pushed the defending champion out of the playoff places. 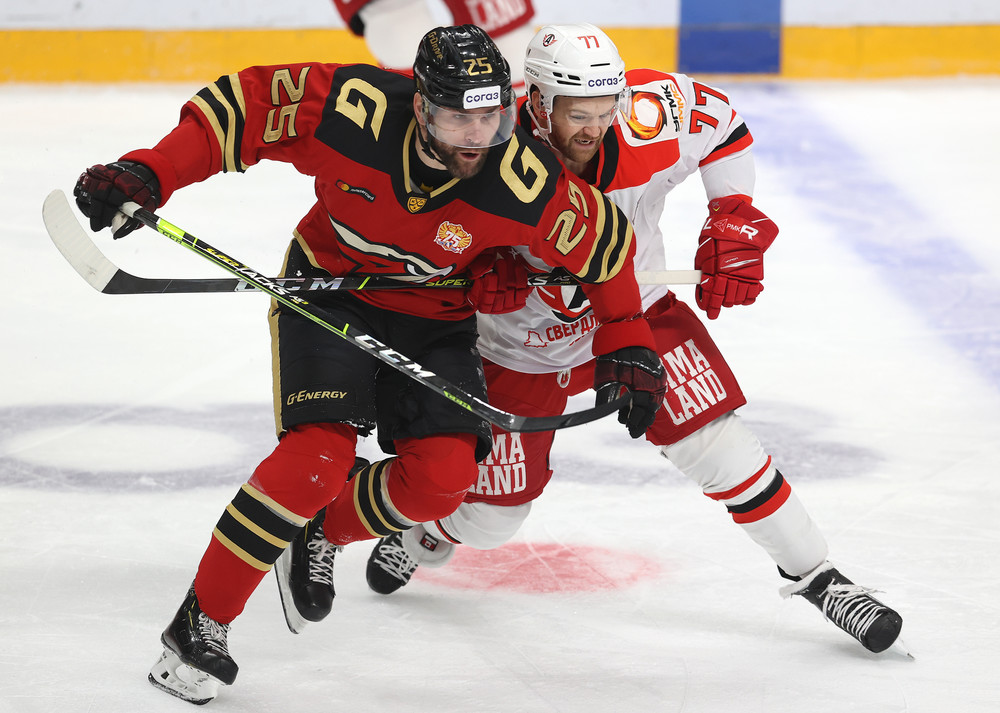 For two periods here there was little between the teams: no goals, and not much difference in terms of attempts. However, early in the third the Motormen went ahead with a Stephane Da Costa goal on a delayed penalty. With Avtomobilist lifted by a three-game winning run, Bill Peters had every reason to hope that his men were set fair for a revenge win over Bob Hartley’s Avangard.

Bryukvin, though, had other ideas. Almost immediately, he tied the scores with a vicious one-timer after good work from Oliwer Kaski. Then, a minute later, he put Avangard in front; Jonny-on-the-spot to gobble up the rebound after Nail Yakupov danced his way through the visiting D. There was still time for an empty-net effort from Corban Knight to seal the win; like Bryuvkin, the Canadian scored for the second game in a row.

These two teams met in poor form, with just one win between them in their previous eight games. And it took a shoot-out to separate them, with Vladislav Kodola giving Severstal the verdict and snapping a four-game skid.

After a goalless first period, Torpedo broke the deadlock through Artur Tyanulin in the 29th minute. However, the visitor soon turned the game around with Dmitry Moiseyev scoring twice to give Severstal a 2-1 lead at the second intermission.

Early in the third, Ivan Chekhovich tied it up at 2-2 but the third stanza was a cautious affair and there was no further scoring. In the extras, a penalty on Andy Miele offered Severstal a big chance to win it, but Torpedo held on for a shoot-out. However, Dmitry Shugayev stood up well and Kodola potted the decider on the 10th attempt to give the Steelmen the points.