Kunlun Red Star enjoyed a memorable victory when a late goal from Cory Kane secured a 2-1 verdict against the Army Men of CSKA. Avangard grabbed an important win over Spartak to return last season’s champion to the playoff places after a recent skid. Traktor maintained its pursuit of Metallurg at the top of the Eastern Conference with a 5-4 win at Amur, while Avtomobilist’s good run continued with a 3-2 success at Neftekhimik. Vadim Shipachyov potted Dynamo’s winner against Severstal, Dinamo Minsk made six straight wins with victory at Torpedo.

Traktor won at Amur for the second time in three days, but after a 2-0 success last time, this was a far higher scoring affair. The visitor looked to have the game under total control with a 4-1 lead after 40 minutes but ended up having to repel a big home fightback in the third.

The opening stanza saw Amur take the lead through Danil Faizullin. However, a triple salvo from Traktor soon wiped out that advantage: Vladimir Tkachyov, Teemu Pulkkinen and Nikita Tertyshny banged in three goals in less than three minutes to put the visitor in charge. At the start of the second, Nick Bailen added a fourth and the outcome seemed to be more or less clear.

Amur refused to give up and spent the third period peppering Emil Garipov’s net with shots. In the 47th minute, Ivan Nikolishin got his first of the season to give the Tigers hope. Almost immediately, though, Lukas Sedlak restored that three-goal cushion, while Bailen collected his third point of the game. The goal survived a bench challenge and ultimately proved to be the difference between the teams. New Amur signing Alexei Volgin made a big impact in the closing stages, scoring himself then setting up Alexander Gorshkov to make it 4-5 with 99 seconds to play. But Traktor held on to take the points.

Avangard returns to the top eight

Avangard’s uncertain start to the season saw the defending champion drop out of the playoff places after three successive losses so Bob Hartley’s team urgently needed this win.

The Hawks welcomed Yaroslav Kosov back into the team, and in the fifth minute he earned a penalty shot which Sergei Tolchinsky converted to open the scoring. However, Spartak was the livelier of the teams in the opening stanza and continued in that vein after the intermission. The second period brought rewards for the visitor, with Ivan Drozdov and Andrei Loktionov finding the net to tie the scores after Corban Knight increased the lead midway through the game. Loktionov’s goal was notable for a fine assist from Alexander Khokhlachyov. 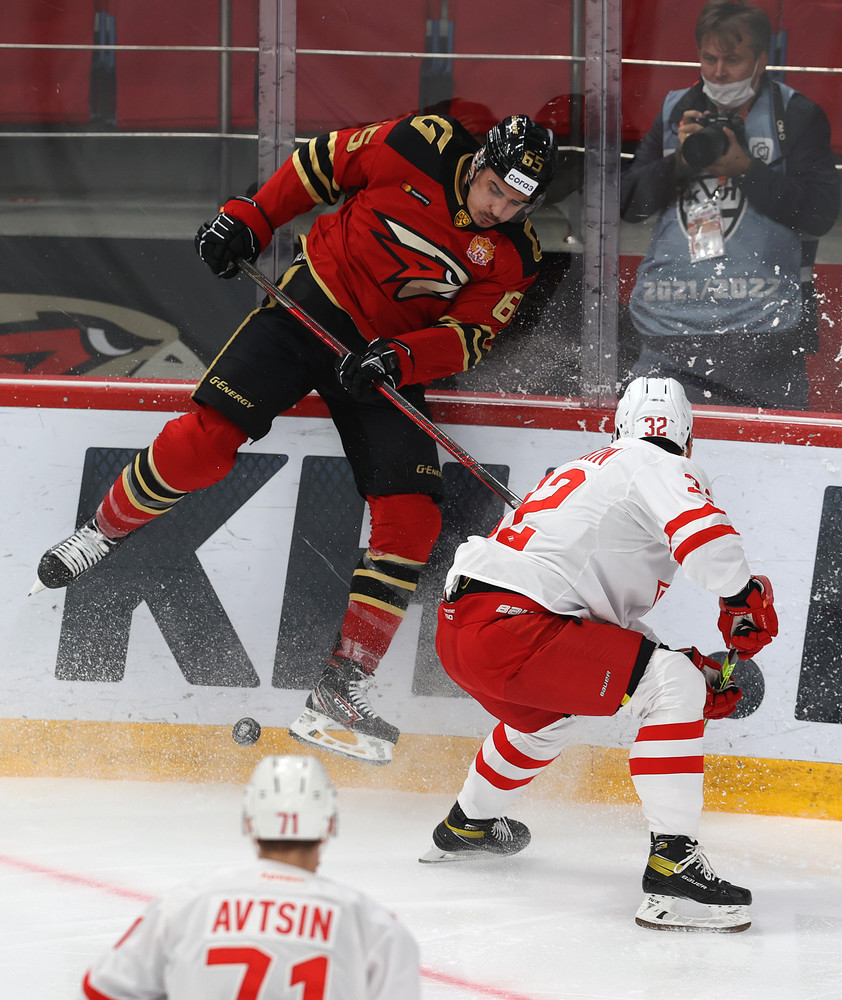 The decisive moment came in the 45th minute. Spartak goalie Oscar Dansk stopped Oliwer Kaski’s shot but delivered the puck right onto Francis Pare’s puck. The Spartak bench challenged the play but ended up taking a bench minor. Shortly after that, Jerabek took a soft penalty and Arseny Gritsyuk extended the lead to 4-2. Vladimir Bryukvin completed the scoring, getting only his second goal of the season and scoring on Spartak for the second time this term.

Dynamo’s leading forward Vadim Shipachyov faced his hometown team — and duly grabbed the game-winner against his first club. The KHL’s leading scorer found the net midway through the second period to snap a 2-2 tie.

Earlier, the visitor took the lead through Robin Press after eight minutes. However, Dynamo responded with 20year-old Yegor Bryzgalov getting his first goal of the season before Dmitry Rashevsky celebrated his 21st birthday with the 2-1 goal. 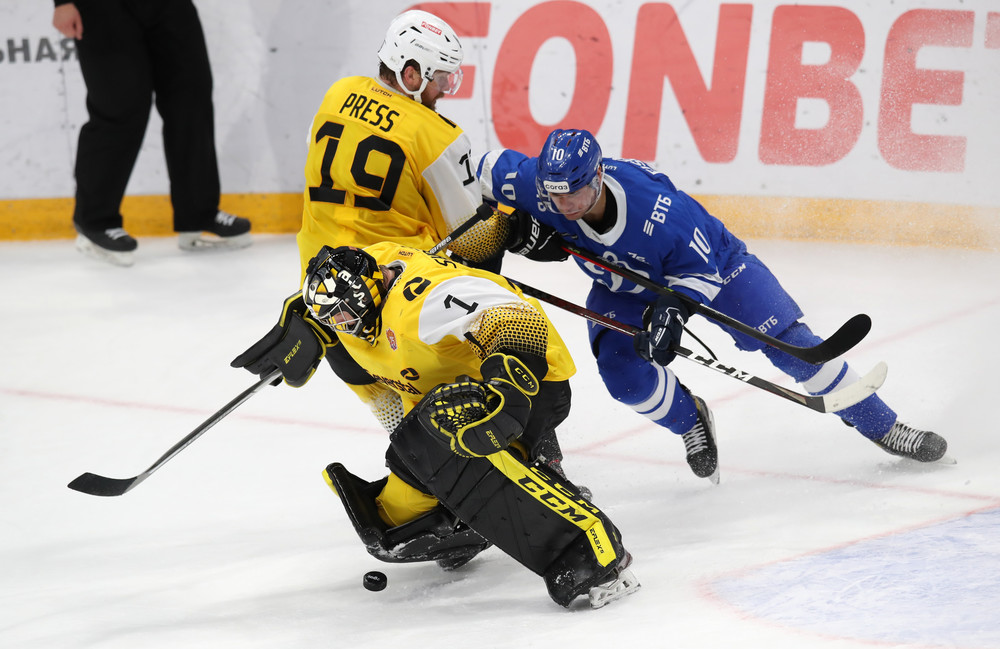 Severstal tied the scores at the start of the second period on a power play goal from Daniil Vovchenko. Shipachyov was the player in the box for that play, and he emerged to redeem himself with a power play goal of his own to settle the outcome.

Dinamo recorded a sixth successive victory thanks to a powerful performance in the third period in Nizhny Novgorod. Trailing at the first intermission, the visitor hit four goals in the middle frame to build a lead that carried it through to the end.

Torpedo shaded the opening exchanges and took the lead late in the first when Kenny Agostino grabbed a power play goal. Early in the second, Dinamo turned it around thanks to tallies from Dmitry Buinitsky and Dmitry Deryabin before Daniel Zaar tied the scores at the midway stage.

But the crucial action came late in the second period. Denis Mosalyov put Dinamo back ahead and 96 seconds later Kirill Voronin made it 4-2. That lead was enough to give the Bison a first win in Nizhny Novgorod for five years, despite a last-gasp power play goal from Theodor Lennstrom, scored in a seldom seen 6-on-3 format with three seconds left on the clock.

After a four-game losing streak, Neftekhimik made some surprising changes to the team. Experienced defenseman Lukas Klok was left out of the line-up and 21-year-old goalie Yaroslav Ozolin came in for an unexpected debut. Bill Peters made no changes to the Avto team that defeated Avangard and Jokerit in its previous games.

Ozolin was tested right from the start, but the young goalie calmly dealt with Avtomobilist’s early efforts. And his fellow youngsters in the Neftekhimik camp also made an impression as the game progressed: Danila Popov, 20, created the opening goal Evgeny Mityakin, 23, who scored his first in the KHL to separate the teams at the first intermission.

The Motormen started the second period on the front foot, but once again struggled to find a way past Ozolin. And, focusing on offense, the visitor found itself vulnerable to the counter. This time, though, neither Dan Sexton nor Libor Hudacek could take advantage. Late in the middle frame, Avto found its shooting range at last. Just 32 seconds separated Ryan Spooner’s power play goal to tie the scores and Vladimir Kuznetsov’s go-ahead goal as the visitor took a lead into the break.

Early in the third, Brooks Macek extended that advantage, punishing a defensive error to make it 3-1. There was a consolation effort from Yegor Popov late in the game, but Neftekhimik could not escape a fifth successive loss.

A late goal from Cory Kane gave Kunlun a shock win over CSKA, less than a week after the Army Men defeated the Dragons 4-1 in Moscow. This time, in Mytishchi, Red Star showed how much they had learned. A rigorous defensive display, backstopped by Jeremy Smith’s 33 saves, gave Ivano Zanatta’s team a chance to win and, with less than three minutes left, Kane took that chance.

The goal came after CSKA’s Mikhail Grigorenko got himself into trouble trying to clear the puck from the danger zone. Josh Nicholls claimed possession, fed play back to Ty Schultz on the blue line and his blast came to Kane on the doorstep for a composed close-range finish. 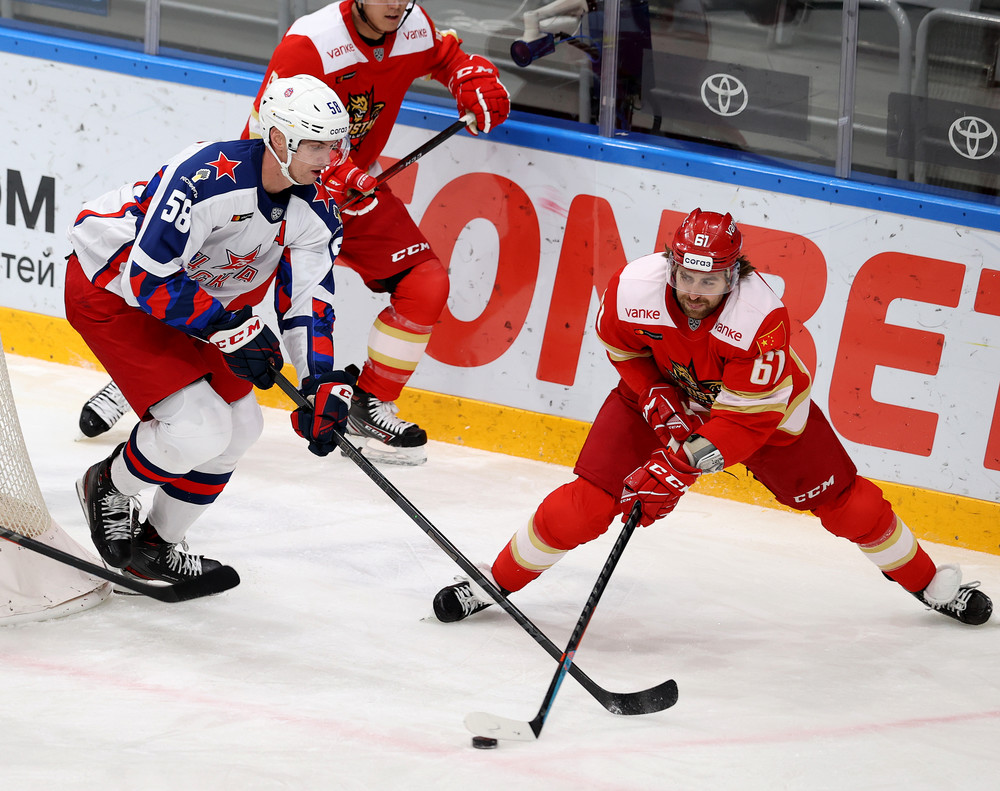 That wasn’t the end of the drama, though. Nikita Khlystov took a penalty almost immediately afterwards, inviting CSKA to come forward and retrieve the situation. But the home defense held firm to clinch a fifth victory of the season for the Chinese franchise.

Earlier, CSKA opened the scoring through Nikita Nesterov in the fourth minute. But Tyler Wong tied it up with a goal on the first power play of the night in the 15th minute and the teams remained deadlocked at 1-1 until the closing moments.