Vityaz made a bright start to the game, with the team’s leader, Daniel Audette and Niko Ojamaki to the fore. Admiral’s play revolved around blocking shots and launching counter-attacks but late in the frame the visitor got into penalty trouble. The Sailors briefly played 5-on-3, then scored in 5-on-4 when Rihards Bukarts converted a great pass from Ushenin.

In the middle frame, Admiral again got a 5-on-3 advantage and this time Ushenin turned it into a goal. Vityaz, whose own power play had been surprisingly unimpressive up to now, pulled a goal back once at equal strength: Alexander Yaremchuk finished off a swift attack.

For the third time, Vityaz failed on the power play at the start of the final frame. And that proved costly: the next shift saw Admiral extend its lead through Libor Sulak. The Czech had been a big figure on the home offense in the early stages and got his reward here while Ushenin collected his third point of the game. Late in the game, Ojamaki pulled a goal back but it was too late to save the visitor from a second successive loss on the Far East tour.

Barys added to Avangard’s problems, sending the Hawks crashing to a third straight loss thanks to a strong goaltending performance from Joni Ortio. In front of the home goalie, Yury Mikhailis rotated his defensemen, bringing Erik Martinsson to the first pair while Roman Savchenko featured as the seventh D-man.

Avangard welcomed back Nikolai Prokhorkin after injury and Bob Hartley tweaked all four forward lines following defeat at Avtomobilist last time out. However, it was the defenses that were on top for much of this game. 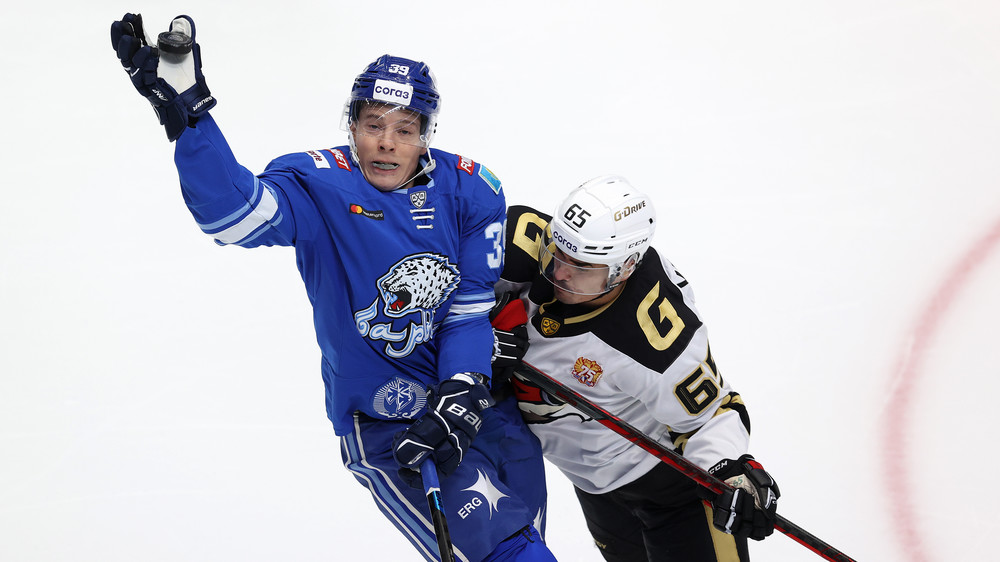 The visitor had the better of the play in the early stages, helped by a couple of first-period power plays and the 5+20 handed to Roman Starchenko in the second. However, it wasn’t until late in the third that we saw the opening — and decisive — goal. Nikita Mikhailis made the breakthrough, picking up the loose puck after Curtis Valk’s rush into Avangard territory needed three defensemen to halt him. The visitor tried to salvage the game in a final storm, playing more than two minutes of 6-on-5 and camping out in the Barys zone for that time, but failing to find a way past Ortio.

CSKA handed Dynamo its second successive loss — and became the first team this season to silence leading scorer Vadim Shipachyov. The Blue-and-Whites’ captain had picked up at least one point in all 13 of his team’s game so far this term but was unable to extend that run against the Army Men.

In the early stages there was little to choose between these two Moscow rivals. However, late in the first period, CSKA began to raise the heat and put some pressure on home goalie Ivan Bocharov. Early in the second, though, a home power play saw Shipachyov come close to fashioning an opening goal: his feed from the boards set up Eric O’Dell for a dangerous shot and Ivan Fedotov needed two attempts to complete the save.

However, CSKA opened the scoring midway through the game. Home defenseman Andrei Mironov was caught in possession in his own zone and Alexander Popov took the puck behind the net before setting up Konstantin Okulov. His shot was saved, but the rebound fell to Maxim Sorkin whose close-range finish was too good for Bocharov.

And Popov’s opportunist streak also set up CSKA’s second of the game when he jumped on a loose puck in the Dynamo zone and set up Pavel Karnaukhov for his second goal in two games. And an empty-net goal from John Gilmour, fired home from deep in his own zone to settle the outcome. Fedotov finished with 29 saves as he secured his first shut-out since joining the Army Men in the summer. Impressively, he achieved it against the highest-scoring team in the KHL this season.