Tuesday’s play was dominated by an individual achievement and a team triumph. Teemu Hartikainen reached 400 KHL points with a goal and an assist in Salavat Yulaev’s 3-0 win at Sochi. Metallurg, meanwhile, won 4-0 at Spartak to post an 11th consecutive victory. Lokomotiv lost for the first time under Igor Nikitin after Lars Johansson’s SKA blanked the Railwaymen. And Dinamo Minsk snatched an overtime win at Ak Bars.

Dinamo Minsk staged something of a smash and grab raid to claim an overtime victory in Kazan. Ak Bars outshot its visitor 35-15 but found Patrik Rybar on top of his game in the Minsk net. At the other end, the Belarusians took their chances and claimed the verdict.

The home team was looking to avenge a 2-5 loss in Minsk in September and dominated the first period. Ak Bars led the shot count 17-3 and piled all of the pressure on Rybar and his defense. But it was Dinamo that opened the scoring when Mattias Tedenby opened the scoring with the teams playing four-on-four. Nikolai Kovalenko cancelled that one out just before the intermission. 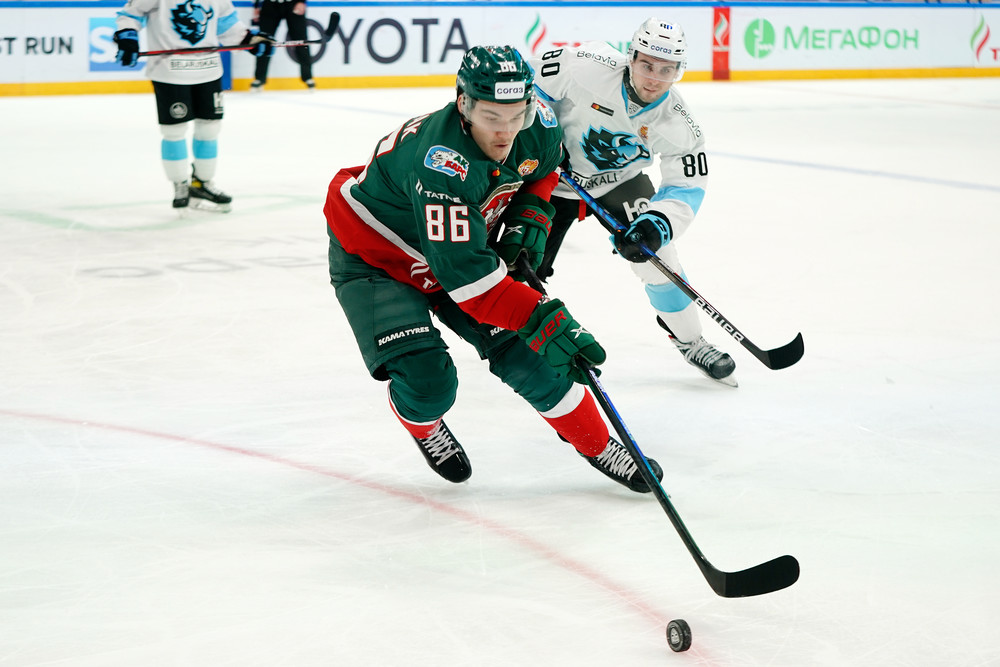 The second period brought more Ak Bars dominance and this time the home team found the net twice. Ilya Safonov, 20, scored the first before setting up another youngster, Nikita Dynyak, for the other. In between, though, Kirill Voronin found the net for Dinamo to keep the game alive. And, early in the third period, a short-handed tally from Ilya Usov locked the game at 3-3 and sent us into the extras.

Overtime did not last long. At the first opportunity, Lukas Bengtsson produced a long pass that sent Tedenby away from Alexander Burmistrov. The Swedish forward got clear on goal and fired past Igor Bobkov for his second of the game.

Igor Nikitin suffered his first defeat as Lokomotiv’s head coach, going down by a solitary goal in St. Petersburg. SKA is an old rival for Nikitin, whose CSKA teams regularly battled it out for supremacy in the Western Conference. But today it was an old team-mate who thwarted the coach with Lars Johansson stopping 21 shots to frustrate the visiting offense.

The shut-out went against the recent form guide: in its previous three games, Loko has hit four each time. SKA, meanwhile, has one of the most effective defenses in the West — only Dynamo Moscow and Severstal have allowed fewer goals — and that proved crucial. In the first two periods, Loko was limited to just seven shots on target as the Army Men strangled the visitor’s offense.

At the other end, just before the second intermission, SKA fashioned the only goal of the game. Stepan Falkovsky emerged from his own zone and tested Eddie Pasquale with a shot from the right-hand circle. Pasquale kept it out, but lost track of the rebound and Marat Khusnutdinov smuggled it away beyond the goal line before shooting the puck back to the crease and celebrating as a rebound took it into the net.

In the third, Loko had chances to salvage something. Alexander Polunin, revitalized since Skabelka’s departure, was denied in a one-on-one. Denis Alexeyev rang the iron, and Maxim Shalunov was denied by Johansson’s pads. But the Swede held on and Lokomotiv’s three-game winning streak was derailed.

Metallurg recorded its 11th successive victory with a convincing display at Spartak. The Steelmen took a grip on the game late in the first period and never relinquished it.

Spartak had briefly moved into the top four in the West, and Jake Virtanen’s scoring start to life in the KHL put a feel-good factor around the Red-and-Whites. The home team started brightly here, with Sergei Shirokov enjoying a couple of good chances early on. However, when Virtanen took a rather unnecessary penalty, the momentum shifted. Metallurg converted its first power play chance of the game: goal for Josh Currie, assist for Denis Zernov. Then Alexei Krasikov took a delaying the game call and the Metallurg forwards reversed those roles as Zernov doubled the lead. 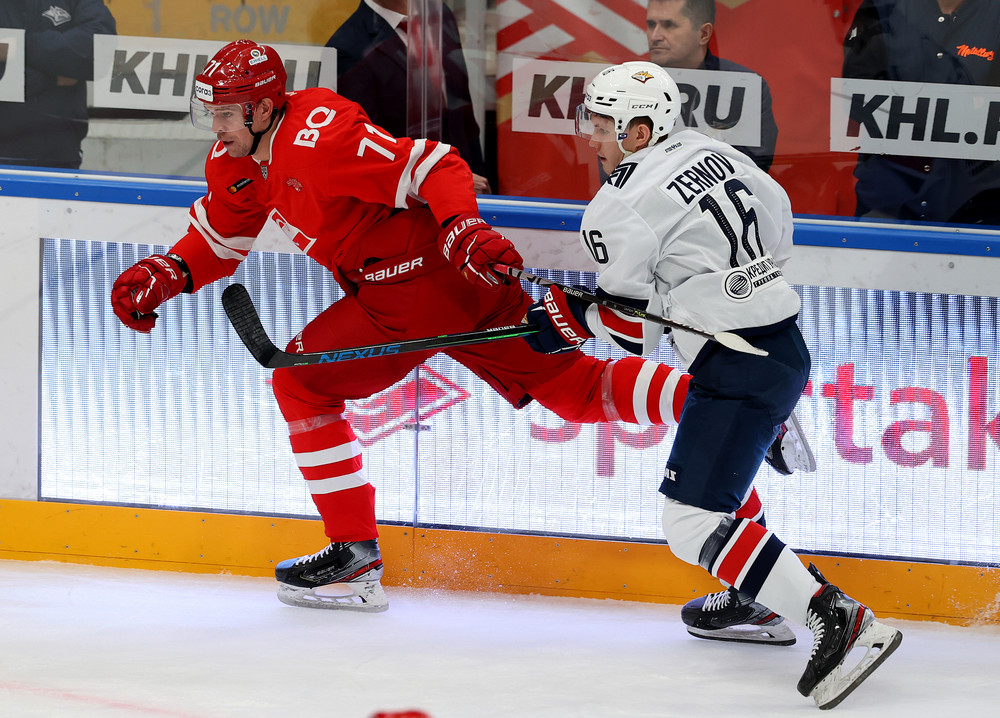 In the second period, Spartak again looked for a fast start. Again, though, Juho Olkinuora was equal to the test. And once again, as the frame progressed Metallurg found the net, this time through ex-Spartak captain Anatoly Nikontsev. In the third frame, Andrei Skovronsky replaced Krasikov in the home net. The 23-year-old’s KHL debut saw him beaten after a couple of minutes by Brendan Leipsic but managed 11 saves in his first taste of the big league. At the other end, Olkinuora had 29 stops for his shut-out.

Teemu Hartikainen got his 400th point in the KHL and Juha Metsola’s 33rd shut-out backstopped a comfortable win for Salavat Yulaev. Andrei Nazarov’s second game in charge at Sochi ended in another loss and the Leopards are now winless in six.

For half the game, this was an even battle — and Nazarov will likely feel aggrieved at the manner of the opening, game-breaking goal. Mikhail Naumenkov’s shot found Maxim Tretyak’s net, but only after the goalie found himself knocked off balance by the clash on the slot between Janis Jaks and Alexander Kadeikin. Nazarov challenged the call, citing interference on his goalie, but the video review concluded that Sochi’s Jaks caused the contact. The goal was given, and Sochi was on the penalty kill. 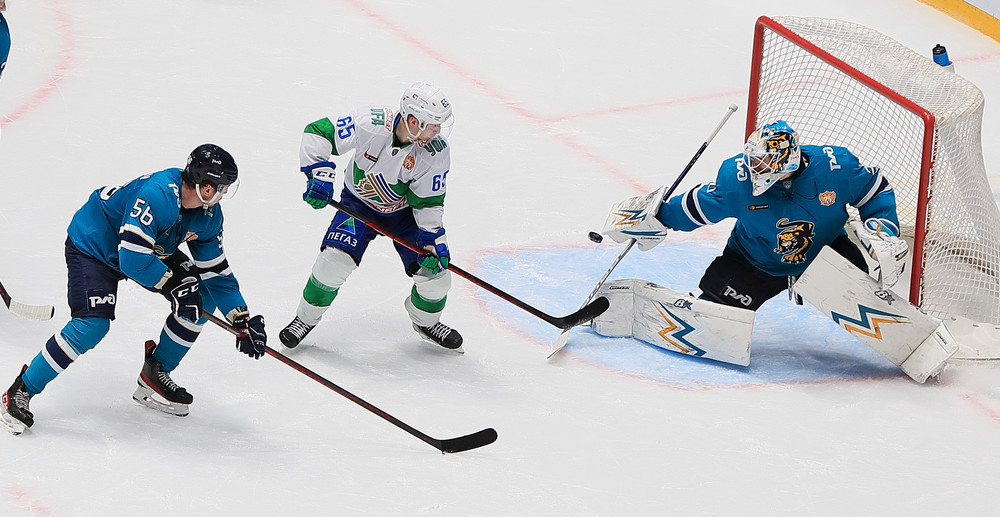 Despite holding off the Ufa power play, the momentum moved decisively in the visitor’s favor. The home team managed just one shot in the second period and late in the frame Stepan Sannikov doubled Salavat Yulaev’s lead. Then, midway through the third, Hartikainen put the game beyond doubt with a third goal for his team: the same marker took him to 401 points; his assist on Naumenkov’s opener saw him reach yet another landmark in a hugely productive KHL career.