The big game of the day saw Metallurg post a 10th successive victory and move to the top of the KHL standings when Nikolai Goldobin’s hat-trick powered a 4-2 win at high-flying Dynamo Moscow. In the Green Derby, Ak Bars claimed local bragging rights with a 2-0 success over Salavat Yulaev. The same scoreline was repeated in Moscow and St. Petersburg, as Spartak beat Severstal and SKA downed Neftekhimik. Igor Nikitin won again with Lokomotiv, but new HC Sochi coach Andrei Nazarov suffered a losing start against Dinamo Minsk.

This battle of the league leaders threatened to become a duel between two men wearing #87. For Dynamo, the KHL’s leading scorer Vadim Shipachyov was out to extend his unbroken productive streak this season. Against him was Nikolai Goldobin, who hit the headlines with some of September’s most outrageous plays.

Today, though, it was Goldobin who took the honors. He scored a hat-trick, while Shipachyov’s game ended early after he crudely hooked Artyom Zemchyonok between the legs and was ejected midway through the second period. Prior to that, though, he produced yet another assist to stretch his scoring streak to 13 games.

All of that kicked off in the second period. First, though, Metallurg grabbed a second-minute lead courtesy of an unlikely source. Artyom Minulin only has one previous KHL goal to his credit, but he popped up with today’s opener off an assist from Goldobin. 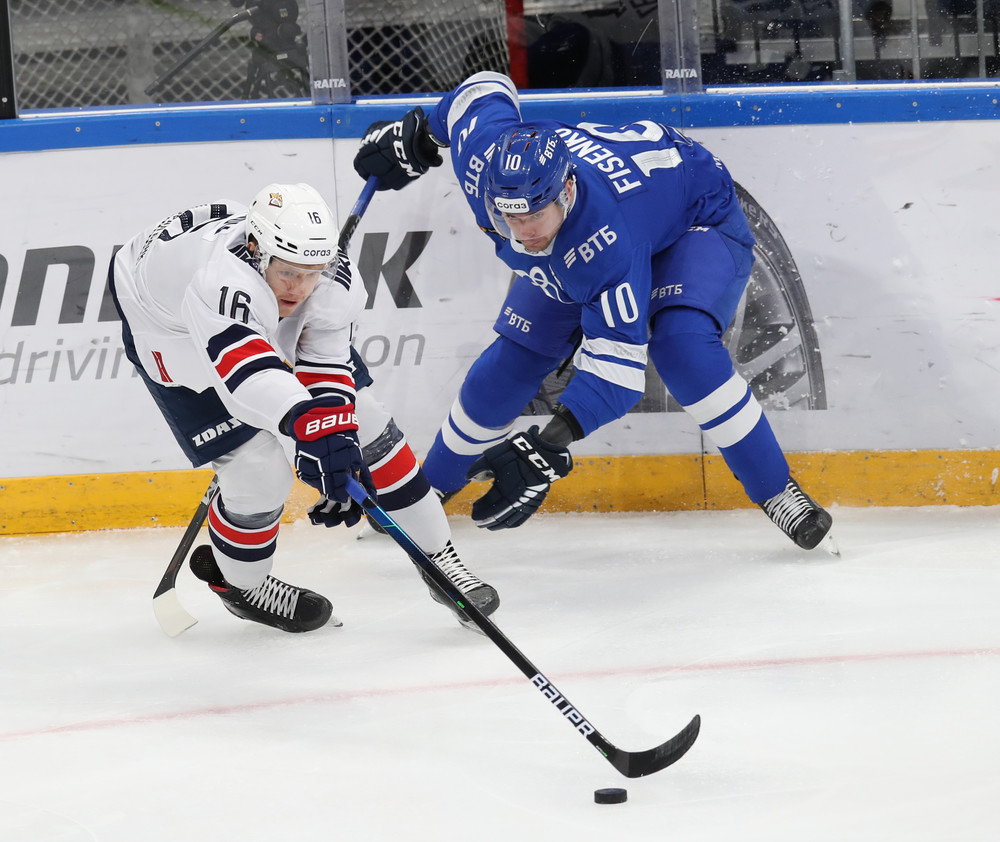 That was the difference between the teams at the first intermission, but the second period was far richer in incident. First, Shipachyov orchestrated a fantastic power play to set up Rob Klinkhammer for a tying goal. Then Goldobin responded, collecting Zemchyonok’s long pass and advancing to deliver a wrister from the right-hand circle. Next came Shipachyov’s indiscretion, amid a flurry of penalties as the game threatened to bubble over.

Dynamo’s best hopes left the ice with its captain, however. Goldobin extended Metallurg’s lead early in the third. The home team reduced the deficit when Klinkhammer got his second of the game, this time a short-handed effort. But Goldobin put the issue beyond doubt when he completed his treble with three minutes to play.

One of the KHL’s key rivalries opened its 2021-2022 edition with Ak Bars defeating Salavat Yulaev in Kazan. After an uncertain start to the season, Dmitry Kvartalnov’s team is approaching top form and, following a win at CSKA last time out, he made few changes. However, he did bring back import Jordan Weal. Ufa made more changes after losing at home to Sibir in its previous game, with Viktor Tikhonov scratched for the visit to his former club and Philip Larsen returning to the first defensive pairing.

In the first period, the visitor had the better of the play. Tomi Lamsa’s team has been admirably consistent this season and here, once again, it stuck to its gameplan effectively. However, Igor Bobkov came up with the saves when needed and, after biding its team, Ak Bars struck. Having killed two penalties, the home team delivered a swift and effective counter play with Artyom Galimov intercepting the puck, getting past Shakir Mukhamadullin and finding the top shelf. 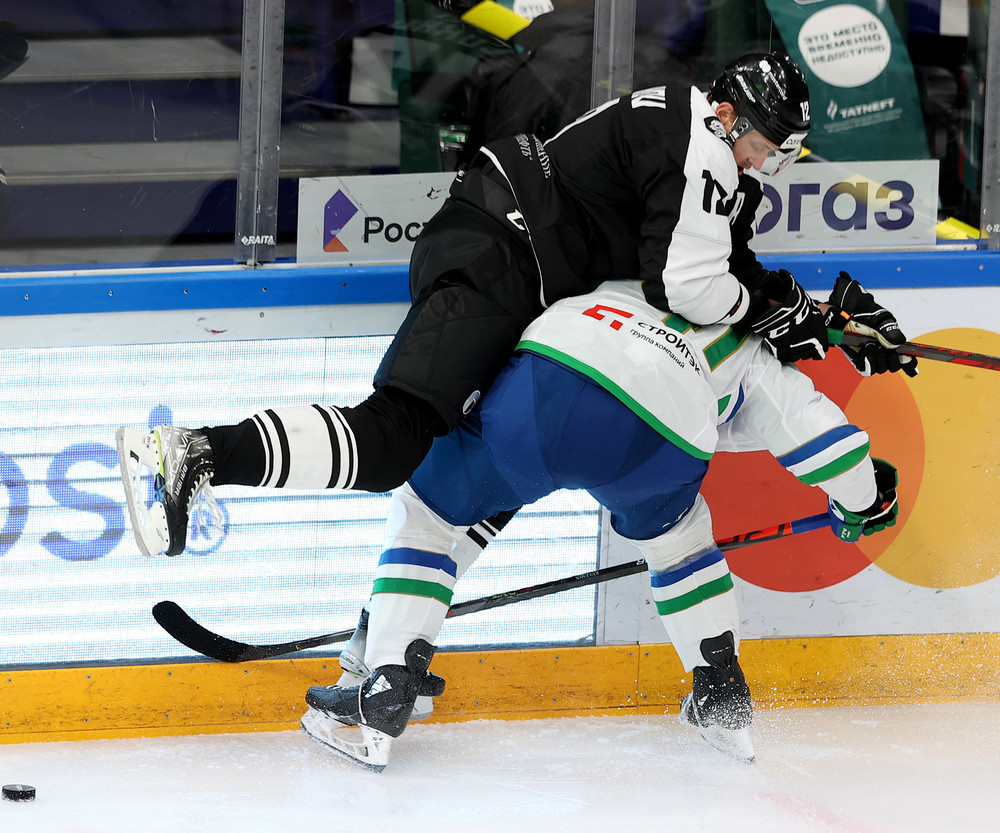 The lifted Ak Bars’ game and in the second period the home team looked far more dangerous. Juha Metsola was far busier, particularly when Ufa had men in the box, but there was no further scoring. At the other end, Salavat Yulaev gradually got back into the game but lacked the necessary touch of guile to really hurt the home defense.

In the final stanza, not surprisingly, the visitor tried to raise the tempo. However, its efforts foundered against the green wall erected by Kvartalnov’s team and an empty net goal from Alexander Burmistrov settled the outcome.

Igor Nikitin can’t stop winning in Yaroslavl. The newly-appointed Lokomotiv head coach made it three out of three today, but Barys gave him a tougher time of it before falling to Alexander Polunin’s late goal.

The visitor opened a 2-0 lead in the first period, with Curtis Valk and Jacob Berglund scoring two minutes apart. The first of those goals was a short-handed effort, adding to Lokomotiv’s frustration. However, the home team responded to tie the game in the first period, with Polunin getting one back before another short-handed effort, this time from Pavel Kudryavtsev, made it 2-2.

At the start of the second period Yegor Korshkov failed with a penalty shot after he was fouled by Yegor Shalapov and moments later Barys was on the PK as Loko tightened the screws. But the visitor held on, and then went back in front with a power play goal from Darren Dietz late in the session. This time, the lead lasted less than a minute before Artur Kayumov made it 3-3.

The third period turned into something of a personal odyssey for Polunin. First, the home forward hit the bar. Then, his one-on-one rush was thwarted by Joni Ortio in the Barys net. Finally, though, he made the breakthrough in the 54th minute, following up to score after Korshkov’s rush.

SKA sent Neftekhimik spinning to a third straight loss, but this game was a tighter battle than the home team might have expected. Despite a big gap between the two clubs in the KHL standings, this game was deadlocked until late in the second period. And only an empty-net goal ended the visitor’s hopes in a hard-fought affair.

The stats showed that there wasn’t much between the teams throughout this game: whether we look at shots on goal, time on the attack, penalties, face-offs or even blocked shots the opponents were within touching distance. However, after 37 minutes of struggle, the breakthrough arrived courtesy of a penalty shot. Rafael Bikmullin gave away possession in center ice and #93 went charging down the ice, only to be halted by Bikmullin’s desperate hook as he lined up a shot at Frans Tuohimaa. The officials signalled a penalty shot and Kirill Marchenko converted the chance.

But SKA struggled to finish off the opposition despite getting that all-important lead. A combination of good goaltending and poor decision-making thwarted the Army Men, while at the other end Lars Johansson had to stay alert to protest that one-goal advantage. Finally, Danila Moiseyev wrapped up the win in the last minute. Johansson finished with 27 saves.

Jake Virtanen was on target for the third game in a row as Spartak blanked Severstal and jumped to fourth in the Western Conference.

The home team edged in front towards the end of an even first period. Semyon Ruchkin’s shot was parried by Dmitry Shugayev, but Sergei Shirokov was on hand to put away the rebound. 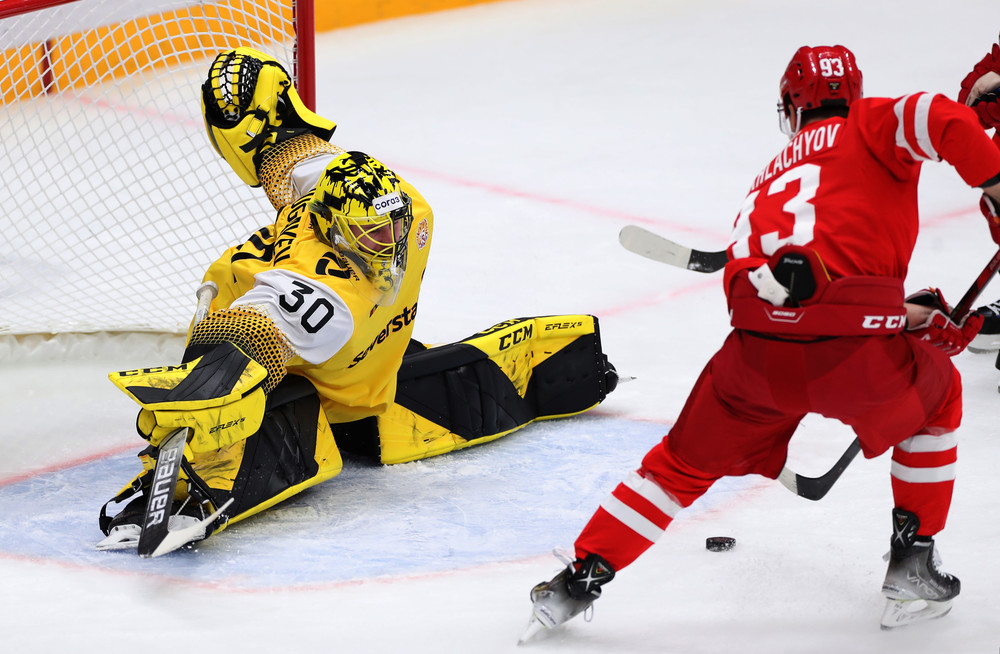 In the middle frame, Virtanen struck once again. Spartak’s new arrival has already made some noise in his few KHL appearances, but Severstal apparently hadn’t got that memo and left him all alone between the hash marks to receive a Jori Lehtera feed from the corner and shoot home. Spartak was good value for its two-goal lead and continued to have the better of the play until the end. Alexei Krasikov made 23 saves for his first shut-out of the season.

No instant revival for Nazarov’s Sochi

Andrei Nazarov took charge of Sochi for the first time after being named as head coach following the departure of Evgeny Stavrovsky last week. Always an outspoken, uncompromising individual, his arrival on the Black Sea was marked with a lively press conference following his first training session with the team. On the ice, though, it was a different story as Dinamo Minsk proved too strong in this opening engagement.

For the first half-hour, this game was competitive. But Minsk ran away with it after Lukas Bengtsson scored made it 3-2 in the 29th minute. Mario Kempe extended the lead in the middle frame and Pavel Varfolomeyev made it 5-2 at the start of the third.

There was still some resistance from Sochi, with Nikita Tochitsky getting his second of the game to keep the contest alive. However, when Tochitsky and the other home goalscorer, Janis Jaks, found themselves in the penalty box, Kempe extended Dinamo’s lead and put the game beyond reach. Varfolomeyev’s second of the game completed the scoring in the last minute.