High-flying Dynamo Moscow was the red-hot favorite on its visit to Kunlun Red Star, but found itself battling back from 0-2 before securing another victory. Earlier, Amur also recovered a two-goal margin on its way to defeating Torpedo in overtime.

Amur climbed off the foot of the KHL standings thanks to an overtime victory against Torpedo. The home team had to battle back from 1-3 down to save this game, but two goals from Alexander Gorshkov and an overtime winner from Artyom Alyayev secured only a third win of the season for the Tigers.

Torpedo arrived on the back of two straight wins, including a 4-2 success over previous unbeaten Dynamo Moscow. And that confidence was apparent in David Nemirovsky’s men from the start as Ivan Chekhovich opened the scoring after 86 seconds. Amur responded to that with a goal on its first power play, Gorshkov getting the assist as Vladimir Butuzov made it 1-1 midway through the opening session.

In the second stanza, Kenny Agostino found the net once again. The American forward hit a hat-trick in the 5-2 win over Traktor last time out, and here his redirect put Damir Zhafyarov’s effort into the net. The officials reviewed the play, concerned about a high stick, but ruled it a good goal. After that, the visitor enjoyed two successive power plays and converted the second with Zhafyarov the provider for Theodor Lennstrom to make it 3-1.

However, Amur remained committed and got back into contention late in the frame when Gorshkov scored his first of the evening. Early in the third, he tied the scores and Torpedo’s efforts to get back in front were in vain. Overtime saw a penalty on Sergei Goncharuk and Amur took advantage of its power play with Alyayev grabbing the winning goal.

Two goals and an assist from Stanislav Galiyev saw Dynamo win at lowly Kunlun Red Star — but the Western Conference pace-setter did not have an easy time of it against an opponent languishing near the foot of the East.

The home team clearly had not read the script and came roaring into the game to open a 2-0 lead in barely seven minutes. The opening goal went to Yang Hu, one of the Chinese Olympic hopefuls added to the roster for the current season. He fired home from the left-hand circle after Chris Seto steered a Ryan Sproul feed onto his stick. Sproul, meanwhile, marked his 100th KHL game with his third point of the season.

Things got even better for the home team when Tyler Wong took the battle to Alexander Yeryomenko in the Dynamo net. Twice, the veteran goalie kept Wong at bay, but the third time was the charm and Red Star had a two-goal lead. 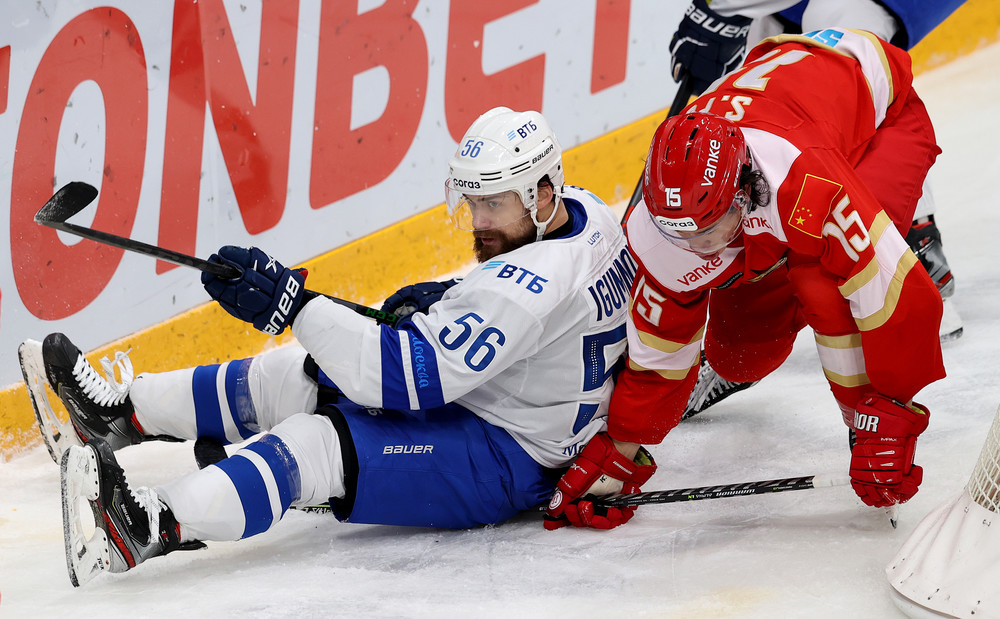 Dynamo, though, is among the league leaders for a reason. By the end of the first period, the Blue-and-Whites were level. Andrei Pedan reduced the deficit with a shot through a crowd of players, then in the 17th minute Galiyev struck on the power play. Vadim Shipachyov’s assist on that play took his productive streak to 11 games and brought up 25 points for the season.

It was tempting to assume that the game would revert to expectations when Eric O’Dell put Dynamo ahead at the start of the second period. But Kunlun was not about to roll over, and Spencer Foo tied it up in the 25th minute of an absorbing encounter. The remainder of the second period was evenly fought, and the teams remained deadlocked at the second intermission.

Early in the third, though, penalty trouble undermined Red Star. Foo and Yip arrived in the box just seven seconds apart, and Dynamo needed just four more seconds to score on that 5-on-3 advantage. Straight from the face-off Galiyev lasered home a shot from between the hash marks, collecting his second goal of the game while Shipachyov got his second helper. The visitor had 1:56 on a 5-on-4 power play but could not add to its lead. Instead, Dynamo was indebted to Yeryomenko’s save when he denied Luke Lockhart’s solo rush in search of a short-handed marker.

The game remained alive until the final minutes, when Galiyev selflessly set up Mikhail Fisenko for an empty-net goal that put the result beyond doubt.