The most exciting game of the day saw SKA battle back from three goals down to defeat Traktor in a shoot-out. Igor Nikitin continued his winning start at Lokomotiv with a 4-1 success at Vityaz. The Eastern Conference leaders, Salavat Yulaev and Metallurg, both posted their 10th victories of the season this evening. Elsewhere, CSKA edged Sibir 1-0 in overtime, Avangard beat Sochi 3-1 and Dinamo Minsk proved too good for Neftekhimik

Salavat Yulaev defeated Avtomobilist for the second time this season as Ufa’s latest home stand got off to a winning start. This was a 10th victory in 11 games for Tomi Lamsa’s team, which continues to set the pace in the KHL standings.

The home power play made all the difference in this game, with all three goals coming when Salavat Yulaev had an extra man. Shakir Mukhamadullin was the first to take advantage, firing home a one timer off Sakari Manninen’s feed. The second period brought a second home power play and a second home goal, with Nikolai Kulemin extending the lead after Sergei Shmelyov found the veteran forward on the slot. 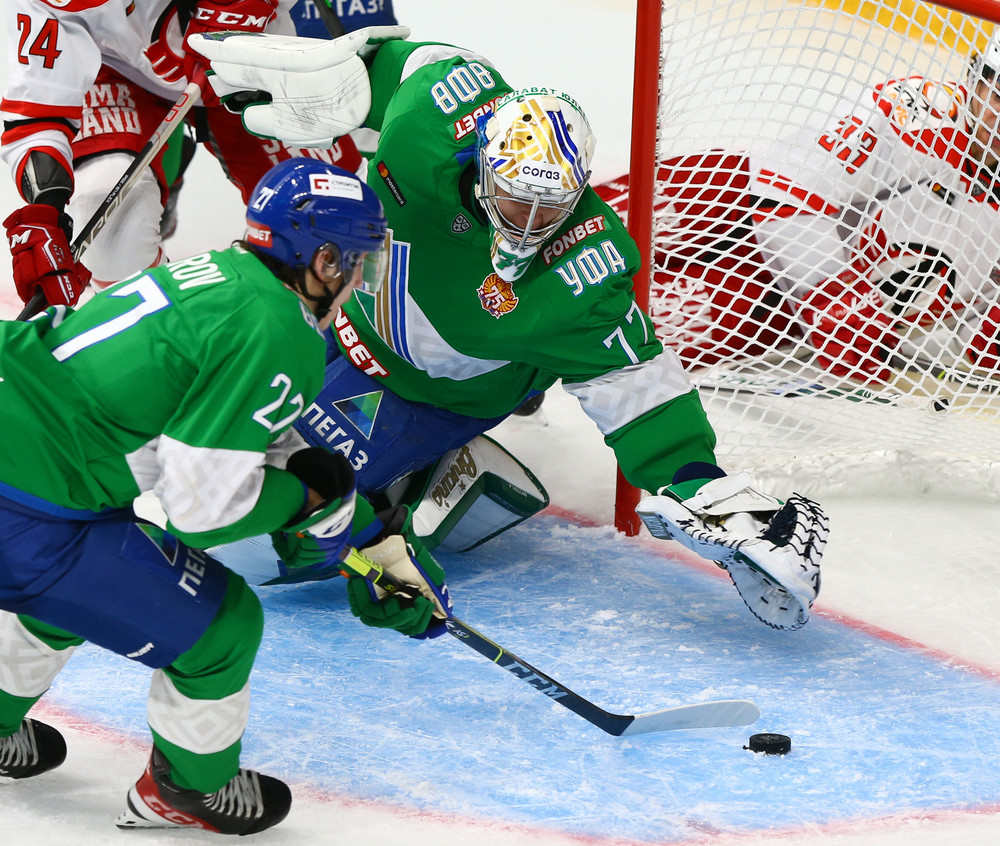 After the midway point, Avtomobilist took a further penalty but this time managed to survive the home onslaught and, shortly afterwards, Stanislav Bocharov scored a breakaway goal to put the visitor right back into the game. But penalty trouble struck once more and Manninen added a third just before the second intermission.

In the third period, Avtomobilist picked up the pace in search of a way back into the game. Crucially, the visitor took no further penalties and, in doing so, blunted the home offense. At the other end, Jesse Blacker had a great chance to reduce the deficit in the 53rd minute when he pounced on a loose puck in front of the net, but Juha Metsola got his glove to the defenseman’s shot. Blacker did have a hand in Avto’s second goal, scored late in the game on the power play, when his shot was redirected into the net by Shane Prince. However, there was no late salvation for the visitor as Salavat kept its hot streak going.

Magnitka enjoyed an eighth successive victory but had to work hard to overcome Barys. Ilya Vorobyov made just one change to the team that defeated CSKA 4-0, restoring Juho Olkinuora as starting goalie in place of veteran Vasily Koshechkin.

The home team looked to dominate this game from the very start, only to find itself down 0-2. In the first period, Barys mustered just five shots at Olkinuora but took a one-goal lead to the intermission thanks to Curtis Valk’s close-range finish in the sixth minute. At the other end, Joni Ortio was much busier, making 15 saves and enjoying a slice of good fortune when Philippe Maillet’s effort hit the post after a breath-taking counter attack. Early in the second frame, Barys scored again with a breakaway goal from Matt Frattin.

That 2-0 scoreline hardly reflected the balance of play and Metallurg set about putting things to rights when Maxim Karpov’s perceptive pass picked out Nikita Korostelyov in space on the slot to convert the second home power play of the evening. But when Cody Kunyk added a third for Barys, Olkinuora was called to the bench and Koshechkin joined the fray midway through the game.

By now, the action was more evenly balanced as Barys started to generate more offense. However, Metallurg gave itself a lifeline late in the middle session when Andrei Chibisov struck seconds before the hooter. Early in the third, Artyom Zemchyonok tied the game but Barys had a great chance to get back in front when Mikhail Pashnin took a major for boarding and left his team with just three skaters. However, the visitor could not take advantage and ending up committing a foul of its own; Brendan Leipsic struck during a passage of 4-on-4 play to put Magnitka up for the first time in the game with 10 minutes to play. That proved to be the winner and Metallurg keeps pace with Salavat Yulaev at the top of the Eastern Conference.

Dinamo Minsk had its youngsters to thank after defeating Neftekhimik. Goals midway through the second period from Alexander Suvorov and Ilya Usov put the home team in command after a lackluster opening stanza and left Neftkekhimik with too much to do.

The first period was frustrating for the home team, with few clear cut chances despite plenty of possession. After the break, though, the team’s rising stars stepped up. Suvorov, 18, and Usov, 20, had a goal and an assist apiece as they scored twice in three-and-a-half minutes. The more experienced Anton Lindholm played a part in both goals.

That put Dinamo in control and the Belarusians sealed the win with a power play goal from Tyler Graovac late in the third. Danila Popov pulled a goal back for the visitor, but there was no time to mount a serious fightback.

Igor Nikitin continued his winning start to life at Lokomotiv, securing his second 4-1 verdict in three days. A week earlier, in Yaroslavl, Vityaz won 3-2 in what proved to be Andrei Skabelka’s final game in charge. Today, with a new man on the footplate, the Railwaymen got emphatic revenge.

After dominating the first period without finding a way to goal, Loko got in front early in the second when Pavel Kudryavtsev burst off the left-hand boards and, after seeing Ilya Ezhov stop his first shot, gathered the rebound himself and completed the attack from the right-hand post. A couple of minutes later it was 2-0. Reid Boucher stole the puck and rushed to the net, where Ezhov made the save but could do nothing as Maxim Shalunov swept home the rebound. That was the end of Ezhov’s game, with Maxim Kloberdanets coming on for only his second taste of KHL action.

The 19-year-old performed creditably, keeping his goal intact until late in the third period. At the other end, Vityaz got on the scoreboard at last when Miro Aaltonen set up in-form Daniel Audette for a power play goal. With 10 to play, that gave the home team hope, but Lokomotiv responded with two quick markers in the final minutes as Denis Alexeyev and Pavel Kraskovsky took the game away from the host.

Traktor blew a 3-0 lead in Petersburg and suffered a shoot-out loss in a game that it looked well capable of winning until the halfway stage.

A lively first period saw both teams create good chances, but late in the session Traktor got ahead. First, the visitor enjoyed some puck luck when Sergei Kalinin redirected into the net with his chest. Within a minute, Nikita Tertyshny doubled the lead, shooting from behind the net and seeing the puck find its target via Lars Johansson’s pad. Then, early in the second, Tertyshny struck again, this time in more conventional fashion at the end of a counter attack.

It’s a long road back from 0-3 in any game, but on this occasion SKA made up the ground impressively quickly. By the end of the second period, the scores were tied at 3-3 with Andrei Kuzmenko instrumental in the home recovery. He started with a pass across the face of goal to set up Kirill Marchenko for a power play goal, then set up Igor Ozhiganov for a blast from between the hash marks. Finally, the forward got the tying goal himself two minutes before the second intermission when he jumped out from behind the net to turn in the rebound following Mikhail Vorobyov’s shot.

After six goals in 40 minutes, we saw none in the remaining 25. In the shoot-out, Marchenko converted two attempts to give the home team a hard-won victory.

Goalies were on top in Moscow, where neither team could find the net in regulation time. This game quickly developed into a Nordic duel between Sweden’s Adam Reideborn and Finland’s Harri Sateri, with the CSKA man finally claiming the W in overtime.

His compatriot Lucas Wallmark potted the gamewinner after two minutes of the extras with a fine piece of skill. There didn’t seem to be much on for him when he collected Konstantin Okulov’s pass back to the blue line and saw three Sibir skaters in front of him. However, Valentin Pyanov had dropped his stick earlier in the play and the forward was unable to effectively defend Wallmark’s advance. Unable to grapple his opponent to the floor, he could do little as the Swede fired in a shot from between the hash marks to beat Sateri at last. 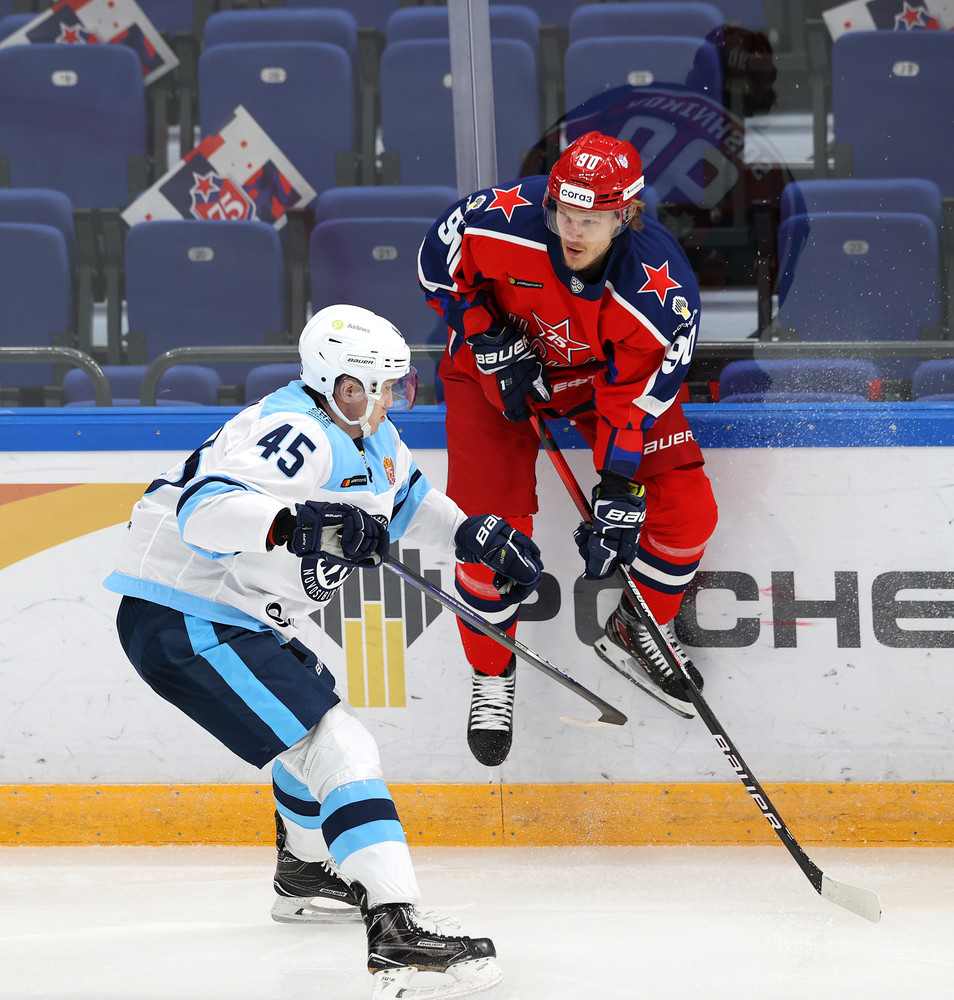 The narrow win was a reward for Sergei Fedorov’s decisive reshaping of his team after its 0-4 loss in Magnitogorsk last time out. Reideborn returned in place of Ivan Fedotov, Artyom Blazhiyevsky was a healthy scratch and all four forward lines were reshuffled. By contrast, Sibir’s Andrei Martemyanov made fewer changes but was able to hand a debut to defenseman Michal Cajkovsky, recently signed from Dynamo Moscow, and fit-again Nikita Korotkov, who was named alternate captain on his return to the game.

The verdict would have been more comfortable had it not been for Sateri. The Finn excelled himself throughout, frequently pulling off big saves to keep Sibir in the game. He was at his best in the third period as CSKA pushed hard for the win.

Avangard came from behind to defeat Sochi and get back on track after Monday’s loss at home to Lokomotiv.

The visitor made a first start in Balashikha and surprised the home team with an early goal. Amir Garayev broke the deadlock inside three minutes. That heralded a period that the Hawks shaded but — a couple of excellent chances for Ivan Telegin aside — rarely gave Magnus Hellberg any serious problems. 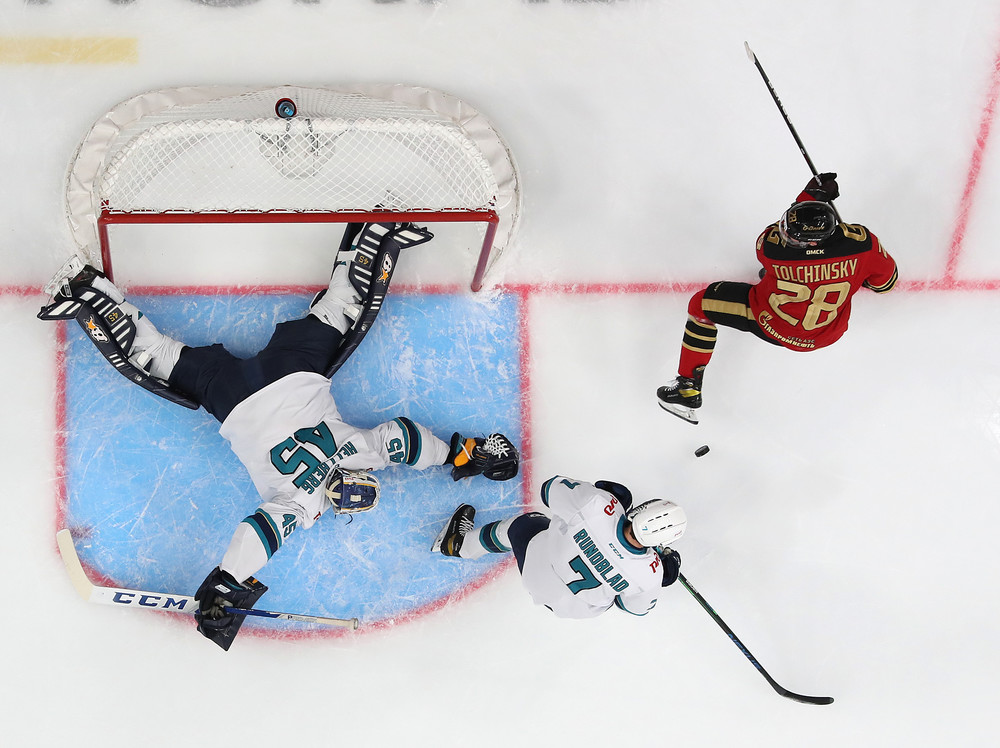 However, the home team started the middle frame on the power play and that tipped the momentum squarely in Avangard’s favor. Sochi had barely got back to full strength when Corban Knight tied the scores, showing lightning reactions to stuff the puck home after Hellberg made a terrific save to stop Sergei Tolchinsky. The play saw Knight stretch his productive streak to five games, and Tolchinsky’s to seven. Midway through the session, the Hawks engineered a two-on-one rush that Peter Cehlarik converted with aplomb to make it 2-1.

Subsequently, the visitor battled hard to find a way back into the game. However, the Leopards could not find a way past Simon Hrubec again and fell further behind when Francis Pare scored on the power play midway through the third. That effectively settled the outcome and Avangard calmly closed out a 3-1 success.