Igor Nikitin saw his new team fall behind inside three minutes at Avangard — but the incoming head coach also saw the Railwaymen dominate the rest of the game and finish with a 4-1 victory. Elsewhere, there were high-scoring games: Vityaz and SKA shared 10 goals in regulation before the home team snatch a shoot-out verdict, Kenny Agostino hit a hat-trick as Torpedo beat Traktor and Barys edged Avtomobilist by the odd goal in nine. There were narrow home wins for Severstal and Dinamo Minsk.

Both these teams went to overtime in their previous games, so it was perhaps not surprising that 60 minutes was not enough to separate them today. In the end, Barys secured a second successive victory when Jakob Lilja snapped a 4-4 tie with a power play goal seconds before the shoot-out. It might be that the home team capitalized on recent experience: this was its third successive game to go beyond regulation time.

Barys was first to show, with Darren Dietz opening the scoring on the first power play of the game. However, the lead was short-lived. After five minutes, Danil Romantsev tied it up and the scores were level at the first intermission.

Midway through the second period, Yegor Petukhov restored the home lead, but Avtomobilist turned that around to go into the break 3-2 up. Jesse Blacker scored on his former club to tie the game, then Georgy Belousov gave the visitor the advantage for the first time. Both goals were assisted by Stephane Da Costa.

An enthralling encounter turned around once again in the third. Barys went back in front on goals from Nikita Mikhailis and Joe Morrow. However, Alexei Makeyev made it 4-4 off a great pass from Belousov and sent us to overtime. In the extras, Barys first had to kill a penalty, then got a power play chance of its own in the last minute when Blacker sat for hooking. Avtomobilist won the face-off after that call and cleared its lines, but Barys quickly retrieved the puck and launched a devastating attack that finished with Lilja rifling home an effort from the right-hand circle.

Lokomotiv Yaroslavl made a winning start to life under its new head coach, coming from behind to get a big victory at the defending champion.

The Railwaymen were playing their first game under new head coach Igor Nikitin, who found himself up against the last opponent he faced as CSKA chief. After losing to Avangard in last season’s Gagarin Cup final, Nikitin left the Army Men; today marked his return to the KHL following Andrei Skabelka’s departure from Yaroslavl.

Nikitin’s first line-up for Loko reunited Reid Boucher and Maxim Shalunov on the top line. The pair played together in the Railwaymen’s last victory, but the two high-profile summer signings have yet to form a consistent partnership. For Boucher, this was a game against former colleagues; for Shalunov it’s a reunion with his old boss from CSKA.

However, if the pre-game focus was on the visitor, it was the home team that made the brighter start. An early Lokomotiv blunder led to a too many men penalty and the Avangard power play put together a well-worked play finished off by Peter Cehlarik. In response, Lokomotiv went on the offensive, dominating the remainder of the first period with 34 attempts on goal, 14 of which forced Vasily Demchenko into a save. The Hawks blocked a further 12 shots. 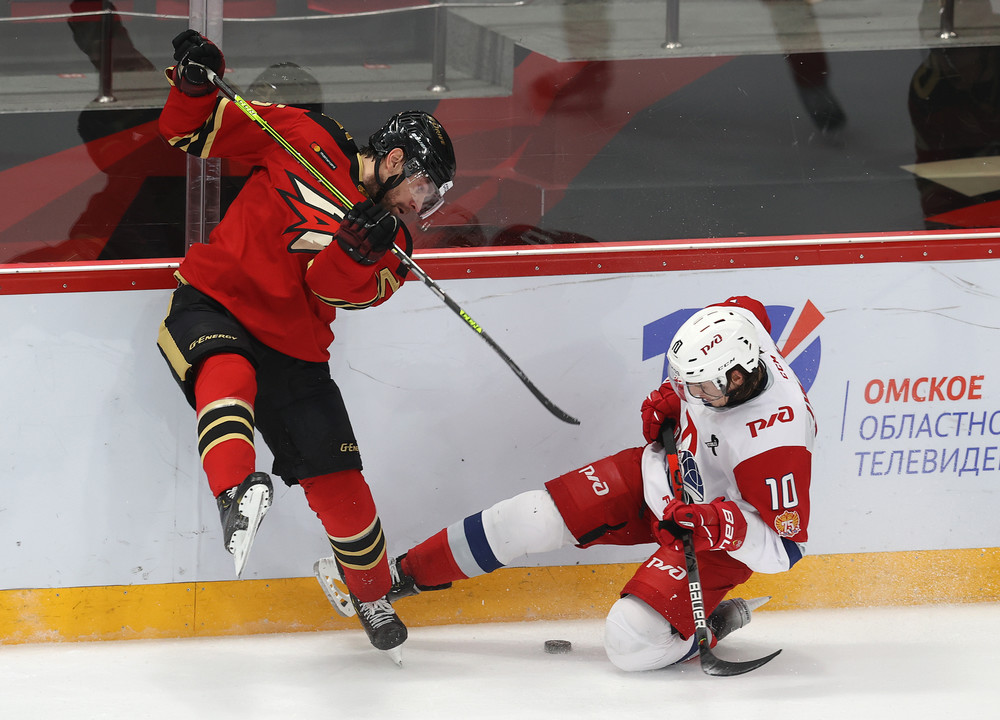 However, the tying goal had to wait until the start of the second period. Loko began on the power play and scored just as Dmitry Shevchenko was returning to the ice. Denis Alexeyev was the scorer, producing a one-timer off Alexei Marchenko’s feed to beat Vasily Demchenko in the home net.

Lokomotiv continued to carry the play to Avangard and finally hit the front in the closing minutes. In the 54th minute, Pavel Kraskovsky stuffed the puck home from close range after Alexander Polunin’s rush ended on Demchenko’s pads. Avangard challenged the play, claiming interference on the goalie, but the goal was awarded after a video review and the Hawks took a bench minor.

That proved costly. On the power play, Artur Kayumov raced from center ice and put an unstoppable shot into the home net — not a conventional PP goal, but in this case a decisive one as Lokomotiv moved 3-1 ahead. Late in the game, Polunin scored into the empty net to seal Nikitin’s winning start in his new role.

SKA battled back from 1-4 down in Podolsk and then grabbed another tying goal with four seconds left on the clock before Miks Indrasis gave the home team the verdict in a shoot-out. The Latvian forward showed nerves of steel, stepping up to convert his team’s fifth penalty in the first phase and keep the contest alive before beating Yaroslav Askarov again in sudden death to settle an enthralling encounter.

The first period saw the teams trade goals from their Finnish imports. Niko Ojamaki gave Vityaz an early lead, but Joonas Kemppainen brought the Army Men level in the 14th minute. Late in the frame, a fight between Artyom Ivanyuzhenkov and Kirill Marchenko raised the temperature still further; the Vityaz man was quick to wrestle his opponent to the ice.

That battle seemed to stir the blood of the home team, and the second period brought three unanswered goals for Vityaz. Mikhail Smolin restored the home lead, a 5-on-3 power play saw Ojamaki pot his second of the night and Daniel Audette produced a terrific solo effort make it 4-1. 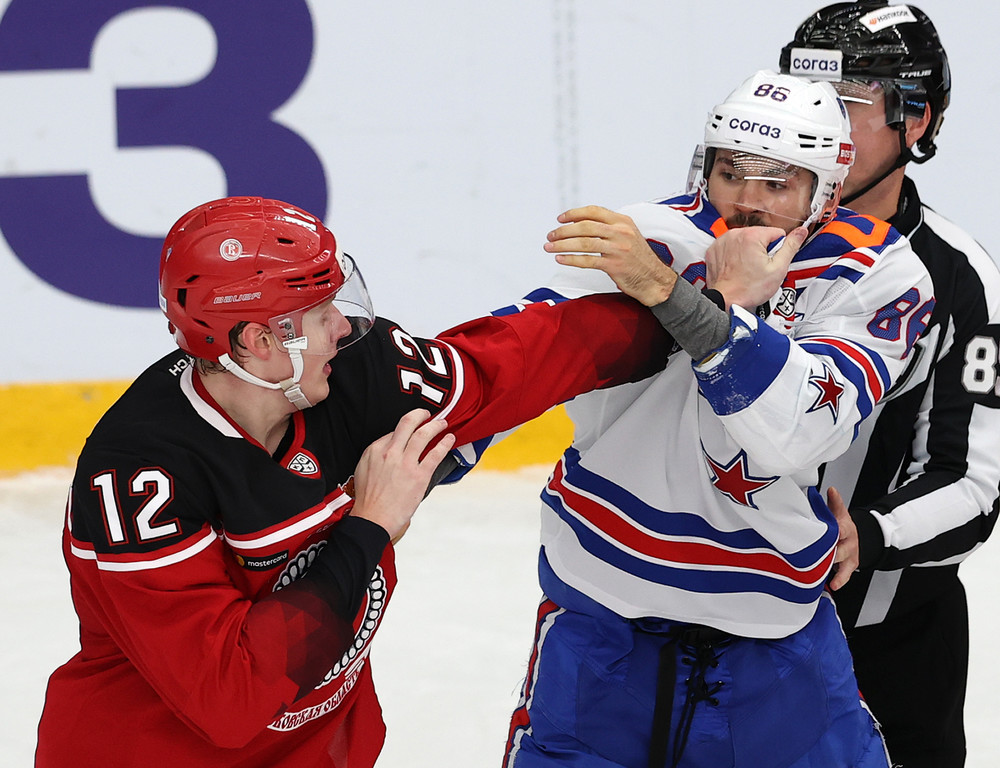 Far from finishing SKA, though, the setback seemed to inspire the visitor. Anton Burdasov scored right at the start of the third period, then a power play goal from Linden Vey made it a one-goal game. Then, with five minutes left, young Vladislav Tsitsyura squeezed a shot inside Ilya Ezhov’s near post at the second attempt, tying the game.

That was merely the start of the drama. Audette got his second of the night with 96 seconds left on the clock when he jumped on a defensive error and fired home from the deep slot. But SKA still wasn’t done. On 59:56, Marchenko tied it up at 5-5. There was an anxious wait while the officials looked at a possible offside, but the goal was awarded and overtime beckoned.

The extras were played with just one break in play — 16 seconds before the hooter. Vityaz came closest to a winner when Miks Indrasis clipped the outside of the post, but the game went to a shoot-out.

Fresh from snapping Dynamo Moscow’s winning start to the season, Torpedo followed up by beating another high-flyer. This time, the victim was Traktor. The visitor came into the game standing third in the East, a point behind the leaders after just two losses in 10 games. But a Kenny Agostino hat-trick set Torpedo on the road to victory.

The American, who arrived in the KHL this summer, wasted little time in getting on the scoreboard. He struck in the third minute with a power play goal, firing home a Daniel Zaar pass from beside the net. Traktor responded with a PP marker of its own, scored by Lukas Sedlak, but was unable to stay in the game.

Midway through the second period, Agostino turned provider for Damir Zhafyarov to make it 2-1 with a fine breakaway. Late in the middle frame, he scored his second of the night when he combined with Ziyat Paigin to slice through the Traktor defense. Then came the hat-trick goal at the start of the third, snaffling up a rebound from a Zhafyarov shot. Sedlak got his second of the evening to keep the game alive, but Kirill Urakov’s empty net effort sealed the points for Torpedo. Agostino finished with a hand in four of his team’s five goals, Zhafyarov’s 1+2 contribution put him close behind his team mate.

A power play goal from Igor Geraskin five minutes from time was all that separated the teams in Cherepovets. Severstal posted a third successive victory while Sibir went down to a seventh loss in 10 games.

The visitor announced the signing of defenseman Michal Cajkovsky from Dynamo Moscow earlier today, but the deal was not completed in time for the Slovak international to make his debut here. In his absence, the Sibir defense held out until deep into the second period before falling to Geraskin’s well-placed wrister off a feed from Yegor Rykov.

That goal, and 28 saves from Konstantin Shostak, proved enough to maintain the home team’s winning streak and keep it in the playoff places in the West.

The Belarusians ended a two-game losing streak with a narrow verdict against Amur. The visitor remains among the teams at the foot of the table but produced a competitive performance under recently-appointed head coach Mikhail Kravets.

Dinamo’s Swedish contingent made the difference in this game. The opening goal went to Mattias Tedenby in the eighth minute, after local prospect Vladimir Alistrov found space in front of the net, deked his way round goalie Evgeny Alikin and handed his team-mate a tap in from the crease. Then, in the third, the home team got a 5-on-3 power play and Lukas Bengtsson set up Malte Stromwall.

In between, Alexander Sharov’s short-handed goal put Amur level. However, the visitor has struggled to get wins this season and once again it was unable to hold on here.