After eight straight wins, Dynamo Moscow lost for the first time this season when it went down 2-4 at Torpedo. Among the other high-flyers, there was a big win for Metallurg (4-0 vs CSKA) and a battling success for Salavat Yulaev (3-2 in overtime at Lokomotiv). Traktor also got a tight verdict, winning a shoot-out at Avtomobilist. SKA and Barys also needed the extras to claim victories over Sibir and Dinamo Minsk. Vityaz defeated Amur 4-1.

Sibir headed out on the road again without injured defenseman Denis Bodrov and his colleague Trevor Murphy, who is ill. The visitor also deployed young Sergei Dubakin up front in place of the experienced Yegor Milovzorov. Barys, meanwhile, unlucky to lose to CSKA last time out, went with an almost unchanged roster.

The game began with three penalties shared among the two teams, but neither was able to take advantage. At full strength, Barys looked more likely to score and limited Sibir to counter attacks. A home power play late in the first period carried over the intermission and helped Darren Dietz to open the scoring in the 21st minute. Harri Sateri made several big saves to keep the score to 1-0 and Sibir got back into the game in the 34th minute when Viktor Komarov tied it up.

Once again, the home team found that it was struggling to turn its superiority into goals. Even a 5-on-3 power play could not furnish a breakthrough in the third period. In overtime, though, Barys got the winner thanks to Curtis Valk’s goal.

Metallurg posted a seventh straight victory with an impressive display at home to CSKA. Veteran goalie Vasily Koshechkin had 30 saves for his latest shut-out. At the other end, former Army forwards Nikolai Goldobin and Brendan Leipsic found the net to defeat their old colleagues.

Goldobin’s big moment came after eight minutes with a memorable goal. There did not seem to be much open to him when he collected a puck in center ice, but the forward did brilliantly to spin away from Nikita Nesterov and Artyom Blazhievsky and advance on goal. Once there, he produced a shot from between his legs to beat Ivan Fedotov and give Metallurg a lead it would hold until the end.

Early in the second, Metallurg added to its lead with a power play goal. Linus Hultstrom saw his shot bounce off both posts and CSKA’s efforts to clear the danger put the puck right onto Maxim Karpov’s stick, inviting the home forward to shoot into an open net. Subsequently, the Army Men raised the tempo and dominated much of the play in the middle session. However, Koshechkin was in imperious form, stopping 16 shots in the frame to preserve his team’s lead.

The third period brought another early goal for the host, with Josh Currie on the spot to convert after Andrei Chibisov’s feed was deflected into his path. CSKA continued to press, Koshechkin continued to deny and the game was wrapped up when Leipsic potted an empty netter.

Avtomobilist’s 21-year-old netminder Vladimir Galkin pulled off 53 saves in this goaltending duel, but still finished on the losing side. In a game of few chances, he was beaten in a shoot-out as Traktor continues its good start to the season.

For 52 minutes, the game was goalless. Then Traktor got the lead its attacking initiative deserved when Vladimir Tkachyov fired home from a tight angle. The lead lasted 74 seconds before Avto tied it up on a goal from Sergei Shumakov off a wonderful feed from Zakhar Arzamastsev.

Locked at 1-1, the teams went all the way to the shoot-out. Tomas Hyka potted the winner to keep Traktor one point behind the Eastern Conference leader.

Torpedo was looking to snap a four-game skid here, and fully matched its high-flying visitor in an even first period. At the start of the second, the home team got in front on a power play goal from Damir Zhafyarov and, within a minute, extended that lead thanks to Artur Tyanulin. The 24-year-old, playing only his fourth game at this level, recorded his first KHL goal. 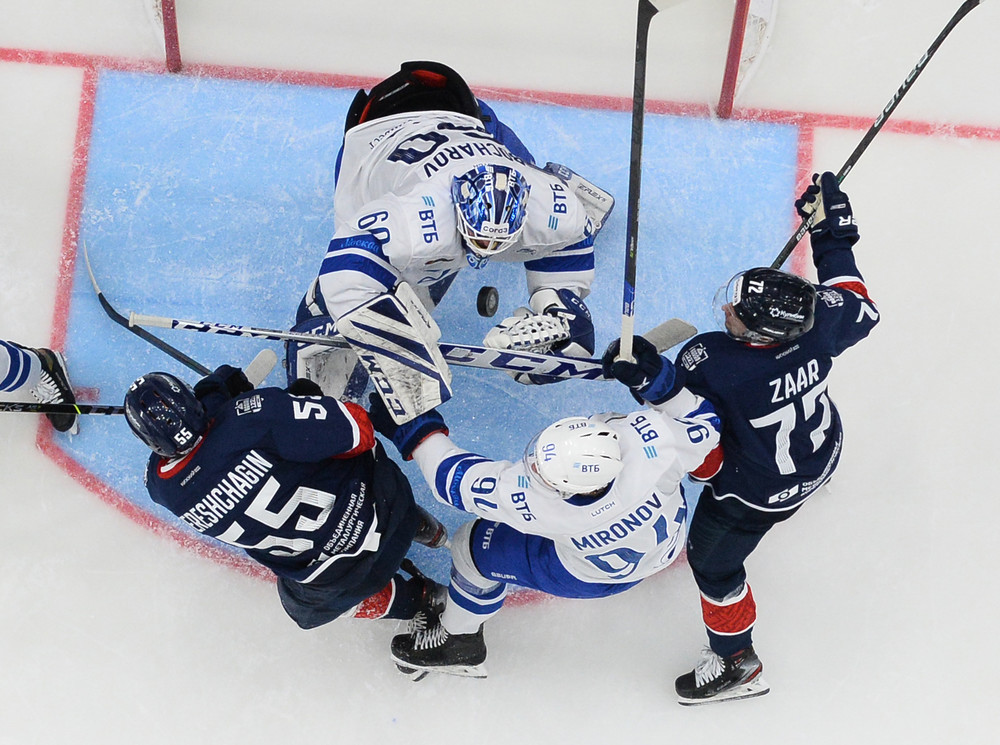 Dynamo’s efforts to hit back were frustrated by a series of penalties and it wasn’t until the third period that the visitor reduced the arrears. Maxim Fedotov took a double minor for high sticks and, six second before he returned to the game, Eric O’Dell made it 2-1. Then the teams traded two goals in 37 seconds, with Danil Veryayev making it 3-1 before Shipachyov set up Slava Voynov to keep it a one-goal game going into the last 10 minutes. However, there was no way back for the Muscovites and an empty net goal from Sergei Goncharuk wrapped up Torpedo’s win.

Ojamaki among the goals again

Vityaz built on Wednesday’s win at Lokomotiv with a comfortable success at home to struggling Amur. The Tigers, who moved off the foot of the table after winning at Kunlun Red Star last time out, had former Vityaz head coach Mikhail Kravets behind the bench in place of Vladimir Vorobyov but his inside knowledge of the opposition was not enough to upset the home team. 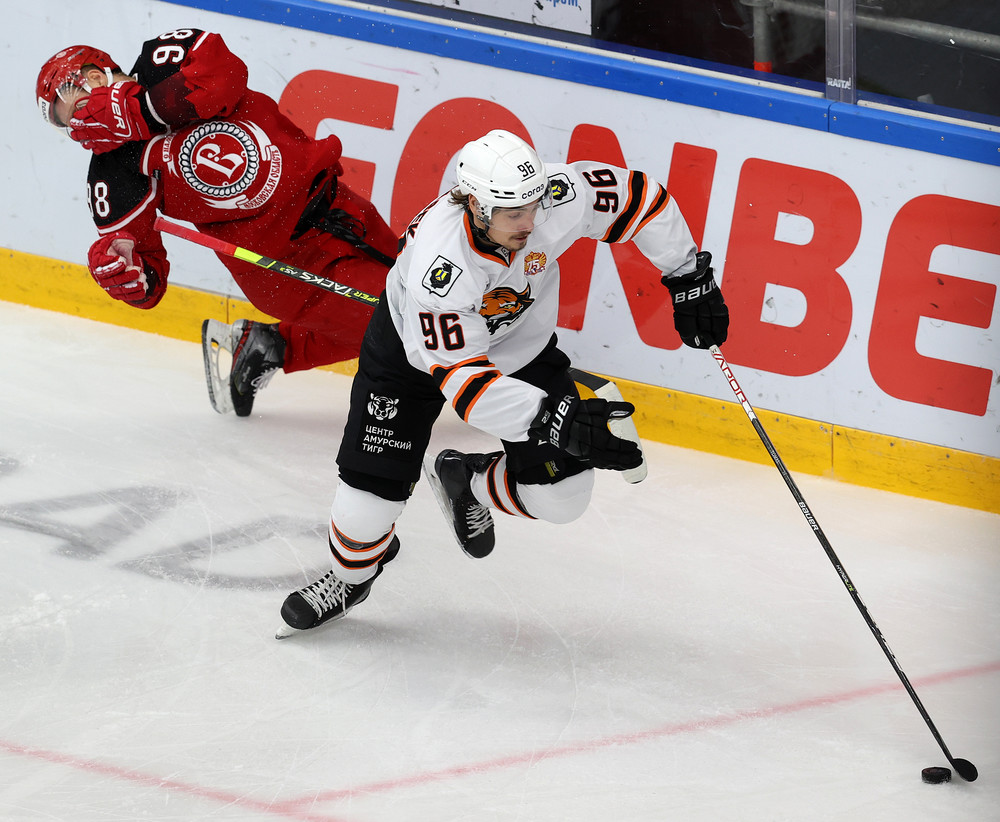 A power play goal from Mikhail Smolin opened the scoring midway through the first period, then Niko Ojamaki extended the lead before the intermission. The Finn scored twice in Yaroslavl and added another here on the power play. Fyodor Malykhin assisted on both goals, bringing up his 100th KHL assist and then his 200th point in the league.

Early in the second period, Ojamaki turned provider as Daniel Audette extended the lead. Then Audette got his second point off the game, assisting on Miro Aaltonen’s strike as Vityaz cruised to a 4-0 lead. Amur managed a consolation goal in the third when Danil Faizullin scored on the power play, but there was no doubt about the winner of this one.

Lokomotiv head coach Andrei Skableka paid the price for his team’s underwhelming start to the season. In charge of a roster expected to compete at the top of the table, Skabelka suffered six losses with the Railwaymen and the club’s management decided to act. Dmitry Yushkevich took temporary charge for the visit of Salavat Yulaev, with former CSKA leader Igor Nikitin announced as the long-term replacement. 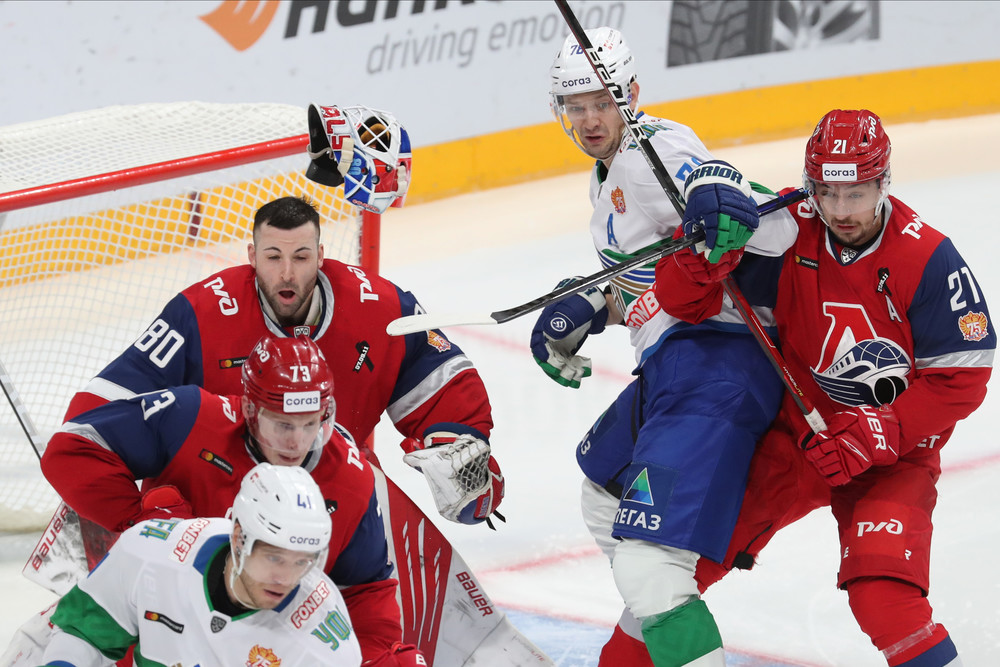 Nikitin’s new charges faced a daunting test against a Salavat Yulaev team beaten just once so far this season and for much of the game they appeared equal to it. Rushan Rafikov gave the home team the perfect start with a goal inside two minutes, and Pavel Kraskovsky doubled the lead midway through the second period.

However, Ufa’s Finns were yet to have their say. Late in the second, a penalty on Reid Boucher saw the visiting power play on the ice and Teemu Hartikainen reduced the deficit seconds before the hooter. Encouraged, Salavat Yulaev raised the tempo in the third period and kept up the pressure on Eddie Pasquale in the home net. It led to a frantic finale: first, Maxim Shalunov missed a glorious chance to win it for the home team when his solo rush was halted by Juha Metsola. Then Metsola went to the bench and Sakari Manninen forced a tying goal on 58:37. Overtime lasted just 28 seconds: Hartikainen drove deep into the danger zone, and when he was halted the puck went straight to Manninen for his second of the night.

SKA snatched an overtime victory in Minsk, but the home team was left frustrated after missing chances to win it in the extras. Dinamo also felt that there was a foul in the build-up to the gamewinner, prompting some angry scenes on the hooter.

SKA got the lead early in the second period through Marat Khusnutdinov. The youngster jumped on a loose puck after a battle on the boards and darted into the circle before shooting past Alexei Kolosov. The home bench challenged the play, claiming that SKA had fluffed a line change and played with too many men, but the video review upheld the on-ice verdict.

That left the Bison short-handed, but SKA took a bench penalty of its own before the home team returned to equal strength and the play rather lost its focus for a few minutes. Back at even strength, though, Dinamo tied it up. Ilya Usov produced a terrific pass from the corner, Kirill Voronin teed up Roman Gorbunov and the 24-year-old forward fired home his first of the season.

From that point on, though, SKA had the better of the game. The visitor had the puck in the net at the start of the third period, but the goal was whistled off for a high stick. That heralded a busy session for Kolosov who made 15 saves to take the game into overtime. After four minutes of the extras, and some big chances for Dinamo to win the game, SKA fashioned a two-on-one rush with Anton Burdasov leading the charge. He broke into the Dinamo zone, exchanged passes with former Minsk defenseman Stepan Falkovsky and smashed home a trademark one-timer to end the game. However, it was not the end of the action, with an angry Taylor Beck confronting the officials after he believed he was fouled in front of the SKA prior to Burdasov’s breakaway. He took a minor penalty, and Dinamo was cited a bench minor for unsporting behavior in an emotional aftermath.