Dynamo Moscow’s victory at Sochi continued the team’s unbeaten start under head coach Alexei Kudashov — and extended his personal winning streak to 24 games behind the bench in Petersburg and now Moscow. That overtakes Oleg Znarok’s KHL record and keeps the Blue-and-Whites out in front in the Western Conference. Elsewhere, CSKA lost 2-1 at Traktor, Salavat Yulaev demonstrated its first lost of the season was just a blip by winning at SKA and Amur moved off the foot of the KHL standings with a 2-0 win at Kunlun Red Star.

Traktor bounced back from its 0-5 loss to Dinamo Minsk with a notable victory over CSKA. It’s the first time the Army Men have lost in Chelyabinsk since February 2017.

The first period was an even affair. Both teams had their chances before Lucas Wallmark opened the scoring in the 15th minute when he got a redirect on Artyom Blazhiyevsky’s point shot. However, Traktor responded quickly to tie the game up before the intermission. Alexei Byvaltsev forced a turnover in the CSKA zone and his quick thinking set up Teemu Pulkkinen for the equalizer. 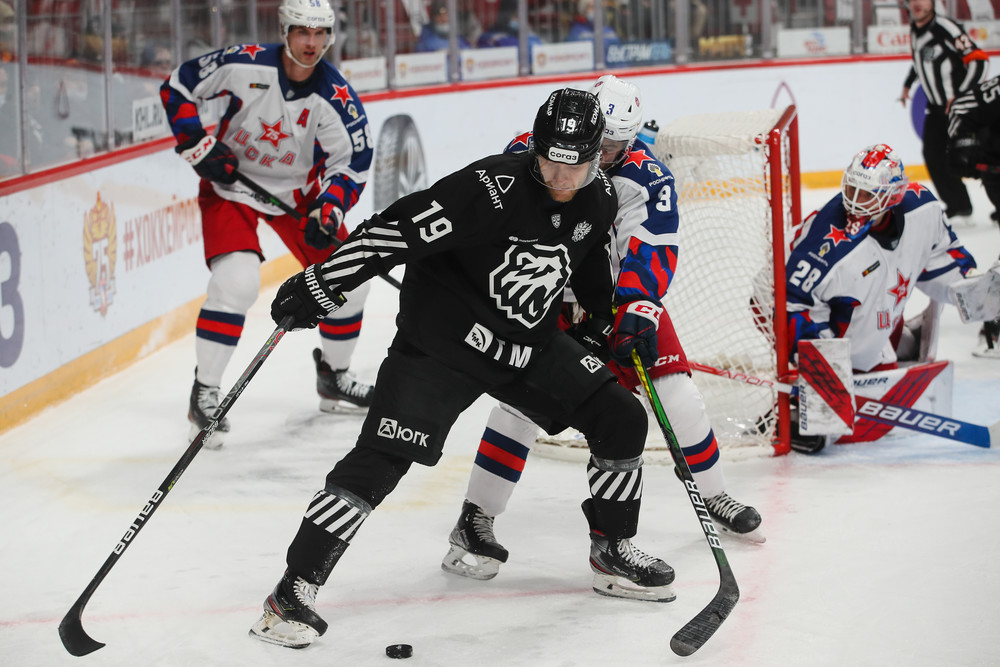 Ahead of today’s game, Traktor’s head coach Anvar Gatiyatulin decided to put Vladimir Tkachyov into the third line. That move paid off in the second period when Tkachyov’s line joined the game with CSKA under pressure. The forward attempted to set up a play with defenseman Nick Bailen and when the initial shot bounced back off an opponent, Tkachyov seized the initiative and put the home team in front. It wasn’t long before Traktor had a golden opportunity to extend that lead, but 110 seconds of 5-on-3 power play could not unpick the CSKA defense again.

Trailing in the third period is nothing new for the Army Men: in the previous two games, they salvaged similar situations at Avtomobilist and Barys. Once again, Sergei Fedorov’s team piled into action in search of a tying goal — but this time Roman Will had the answers. The home goalie stopped 18 shots in the third period, and 33 in total, to backstop his team to a hard-fought victory.

Alexei Kudashov entered the KHL record books after his 24th consecutive victory as a head coach in this league. Dynamo’s winning start to the season takes Kuadshov beyond the mark set by Oleg Znarok. Ironically, these 24 successes are shared between the two teams that Znarok led to Gagarin Cup glory — SKA and Dynamo. Kudashov was behind the bench in Petersburg during the COVID-curtailed 2019-2020 campaign, finishing the regular season on a 12-game tear before sweeping through round one of the playoffs before play was suspended. After a year away from the KHL, the former national team head coach returned with Dynamo and has an eight-game winning streak at the start of this season.

On the face of it, this was a routine assignment for an in-form Dynamo team. However, Sochi’s performances this season have been better than their results might suggest: despite that six-game losing streak, Evgeny Stavrovsky’s team tends to miss out by the odd goal rather than suffer a heavy defeat. With that in mind, the Blue-and-Whites could expect a tough test if they were to extend their winning streak.

And so it proved. For almost two periods, nothing could separate the teams. In the first period, all the key stats were close to even and goalies Magnus Hellberg and Alexander Yeryomenko, both hugely experienced, kept the scoreboard blank. The second followed a similar pattern until the 38th minute when Dynamo finally got in front — with a goal from an unlikely source.

There was nothing unusual about the sight of Vadim Shipachyov carving out a path through the home defense and testing Hellberg once again, but few would have backed defenseman Andrei Pribylsky to jump on the rebound and fire home. The 24-year-old has been on the bubble between the KHL and VHL since his big league debut in 2018; in making the breakthrough in this game, he also got his first KHL goal at last. Shipachyov was credited with an assist, continuing his record of at least one point in every game this season.

Early in the third period Dynamo doubled its lead and, once again, it was an unfamiliar goalscorer. Vladislav Mikhailov’s only previous goal came in the 2018-2019 campaign. Since then, the 20-year-old, like Pribylsky, has been in and out of the first-team picture. Today, though, he got a chance and grabbed the second goal with a backhand shot that surprised Hellberg.

Sochi did not give up, but Dynamo’s defense was resolute through three penalty kills. Late in the game, the visitor added some emphasis to the final tally with goals from Eric O’Dell and Dmitry Rashevsky completing Kudashov’s march to a record-breaking 24th consecutive KHL victory.

Salavat Yulaev rebounded fast from its first defeat of the season and picked up an impressive victory at SKA. The home team arrived on a three-game winning streak of its own but found itself up against an opponent with a point to prove after losing to a late goal at Severstal. The visitor topped the shot count ... and turned that pressure into goals with a couple of power play efforts at the start of the middle frame.

The first period was tight, with the teams sharing just 11 shots on goal and neither able to find a breakthrough. However, when Ufa got its first power play of the night at the start of the second, Sakari Manninen was on hand to give the visitor the lead. SKA failed to learn its lesson and took another penalty almost immediately. Take two, and Manninen turned provider as young Shakir Mukhamadullin fired home a second. 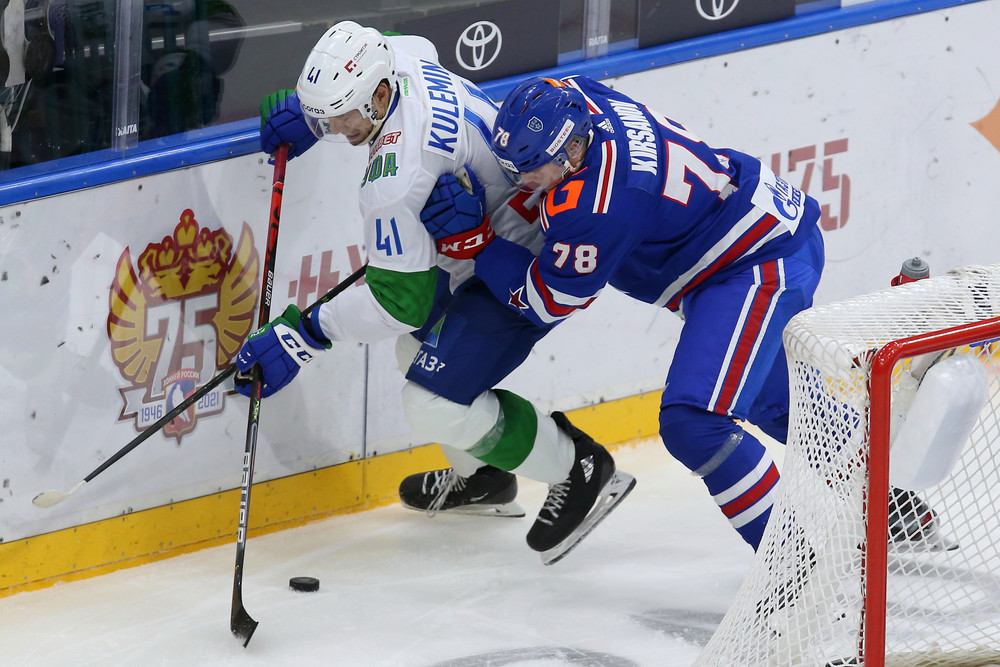 That ushered in a period dominated by Salavat Yulaev, but the next goal came at the start of the third when Rodion Amirov’s cross ice pass was met by Pyotr Khokhryakov at the back door to make it 3-0.

Belatedly, SKA got back into the game. Anton Burdasov reduced the deficit when he reacted fastest to the rebound from a Daniil Pylenkov piledriver. Then, with just over three minutes to play, the home team withdrew goalie Lars Johansson in search of a big recovery. Burdasov scored again in 6-on-5 play to put the game on a knife edge but continuing to play without a goalie cost the home team when Danil Bashkirov found the empty net.

Amur moves off the bottom

This basement battle saw 23rd-placed Red Star entertain the only team below it in the table. And Amur’s 2-0 victory in Mytishchi sees the teams change places, with Evgeny Alikin’s 30 saves guiding the Tigers to only a second win of the season.

Amur went ahead late in the first period when Andrei Alexeyev stole the puck from Greg Squires and hared down the ice to beat Alexander Lazushin from close range. And the visitor extended its lead in similar fashion late in the second period when the Dragons’ power play was turned over in center ice and ex-Red Star man Gleb Zyryanov burst clear to make it 2-0. 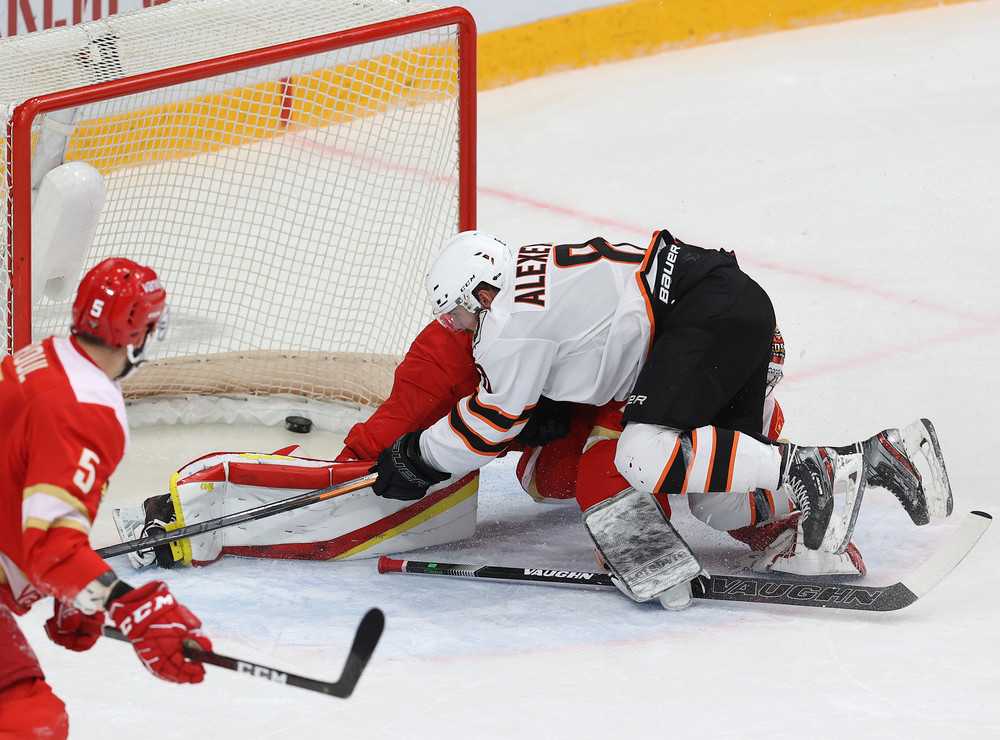 Red Star thought it had a goal back midway through the third when Brandon Yip pounced on the rebound from a Ryan Sproul shot, but a bench challenge from Amur saw that effort whistled off. Home forward Ethan Werek collided with Alikin after the initial save, preventing the goalie from doing anything about Yip’s follow-up effort.