Goalies were on top in Monday’s action, with four games ending in a shut-out and the fifth producing just three goals between the teams. Metallurg’s Juho Olkinuora, Dinamo Minsk’s Alexei Kolosov, Harri Sateri of Sibir and Magnus Hellberg of Sochi all kept the opposition at bay — three of them on the road — while Ak Bars’ 2-1 verdict over Vityaz was the only game in which both teams scored.

Metallurg took complete control of this game in the first period to record its second victory over the season over Admiral. When the teams met 10 days ago, it needed overtime to separate them; today, on the Pacific coast, the outcome was rarely in doubt as Magnitka powered to victory.

Admiral was only competitive for the first 10 minutes of this one. Metallurg then seized the initiative with four unanswered goals in the first period. Denis Zernov broke the deadlock when he converted a Mikhail Pashnin feed, then Yegor Yakovlev, Andrei Chibisov and Philippe Maillet took the game away from the Sailors. Nikolai Goldobin contributed three assists.

In the third, Metallurg killed three penalties before Maillet got his second of the game to complete the scoring. The Canadian finished with 2+1 to move to 13 points for the season, making him the top-scoring import so far and putting him just one behind Vadim Shipachyov. At the other end, Juho Olkinuora stopped 40 shots to record his second shut-out of the season.

Anton Wedin’s first goal of the season was enough to give Sibir a tight verdict over Kunlun Red Star. The Swede, who enjoyed a strong pre-season, failed to produce a point in his first four KHL games. Today, though, he came up with the game-winner in the 27th minute, bursting down the right-hand channel and firing home a shot from a tight angle.

That was the only goal of the game, although Sibir will feel it could have had more. Soon after Wedin’s marker, Denis Golubev lazered a wrister over Alexander Lazushin’s shoulder but the effort was whistled off following a coach’s challenge for offside earlier in the play. Moments later, Oleg Li hit the inside of the Red Star post, only to see the puck bounce to safety.

The Dragons struggled to generate much offense but Lazushin was in fine form to keep the game alive until the very end. In a frantic finale, the visiting goalie stopped a penalty shot from Yegor Milovzorov before Kunlun’s final storm saw Brandon Yip hit the piping. But Wedin’s goal was enough to settle this one.

Not many people would have called this one in advance. Traktor came into action on a five-game winning streak, while Dinamo has been inconsistent this season. However, a battling 0-1 loss at unstoppable Salavat Yulaev might have been a hint that Craig Woodcroft’s team is getting its game together. The visitor is missing several players through injury, but still managed to find a more than competitive roster here.

Traktor has prospered this season with fast starts in many games, and the home team was close to taking the lead in the first shift here. Instead, though, Alexei Kolosov kept his goal intact and the first penalty of the game enabled Dinamo’s Malte Stromwall to open the scoring at the other end. That gave the visitor renewed belief and seemed to undermine the home team; defensive errors crept into Traktor’s play and one of them helped Kirill Voronin to double the lead.

In the second stanza, both teams had their chances. Traktor relied on puck possession to create its opportunities, while Dinamo played more on the counter-attack. Both goalies were repeatedly called into action, but it wasn’t until late in the frame that we saw a third goal: Tyler Graovac opened his KHL account with a power play effort that looped over Roman Will’s back.

Dinamo then put the game out of reach early in the third. Another Traktor error led to Pavel Varfolomeyev making it 4-0, and Taylor Beck added a fifth with 11 minutes to play.

A late Kirill Petrov goal keeps Ak Bars’ revival on track. The Kazan team has now won four of its last five, but the problems for Vityaz continue after a seventh successive loss.

Young forward Artur Brovkin was making just his fifth KHL appearance for Ak Bars in today’s game, but inside three minutes he had his first ever goal in the big league. The home team was quick to turn defense into attack with Alexander Burmistrov breaking down the right-hand boards. The veteran’s rush drew two defensemen to him, leaving Brovkin all alone in the center and the youngster’s quick shot was good enough to beat Ilya Ezhov. 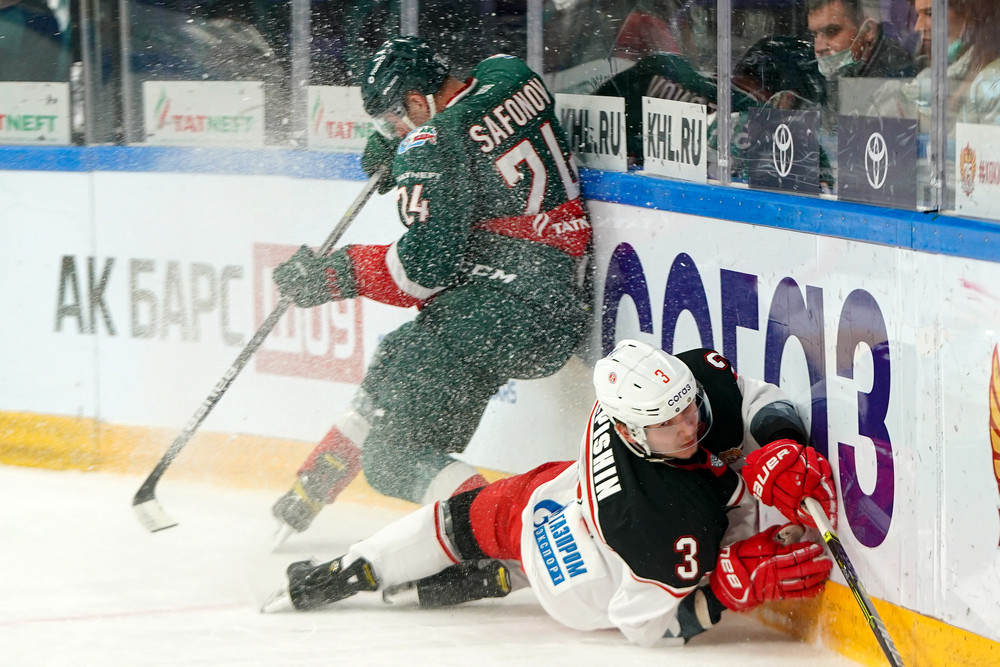 Vityaz has not had much to cheer this season, but Daniel Audette conjured a moment to remember in the 13th minute. The Canadian forward went coast-to-coast to tie the game. That’s his fifth goal of the season, and his most impressive to date, as Audette extends his goalscoring streak to three games.

It was starting to look like that goal would take Vityaz to overtime for the fifth time this season. However, with less than two minute to play Ilya Safonov got a clean win in an attacking face-off and immediately sent the puck back to Petrov at the top of the circle. The forward did not hesitate, wiring home the winning goal with 99 seconds left to play.

Magnus Hellberg made 36 saves to frustrate Neftekhimik and snap Sochi’s six-game losing streak. The home team had more than twice as many shots in the game, but could not find a way through and Alexander Zhabreyev’s early goal was enough to win the game.

Sochi, winless since Sep. 4 and without a goal in its two previous games, needed a boost here. And, with less than four minutes played, the Leopards got just that. Artyom Nikolayev’s work behind the net was not entirely fluent, but he got the puck back to the Neftekhimik crease where Zhabreyev was on hand to rifle home the opening goal. The 21-year-old, in his first KHL season, already has two goals.

After Sochi’s early goal, Neftekhimik took control of the game. However, Hellberg, the visitor’s vastly experienced Swedish goalie, was in obdurate mood. He a raft of big saves to keep the host at bay and secure a much-needed win for his team.