It’s a magnificent seven straight victories this season for Ufa, with Saturday bringing a 1-0 verdict over Dinamo Minsk to extend the club’s best ever start to a KHL campaign. Bitter rival Ak Bars also picked up a win, edging Sochi by a similar margin. Reid Boucher scored twice for Lokomotiv to secure a 4-3 win against Torpedo, while Brandon Yip’s 50th goal for Kunlun Red Star could not save the Dragons from defeat at Traktor. Metallurg blasted five unanswered goals in the second period to overwhelm Amur and Neftekhimik halted its losing streak at home to Vityaz.

Amur had high hopes of recording back-to-back wins at the first intermission — but a second-period blitz left that ambition in ruins. The Tigers came into the game on a high after picking up a first victory of the season last time out, but Metallurg maintained its impressive streak and posted a fourth straight win.

An even first period swung sharply in the home team’s favor in the closing stages, when defensemen Michal Jordan and Sergei Tereshchenko fired Amur into a 2-0 lead. However, this was comprehensively extinguished in the middle session when Metallurg’s forwards found their range to score five unanswered goals. Anatoly Nikontsev got things started, then Nikolai Goldobin — who might have opened the scoring in the first — grabbed two goals, both assisted by Maxim Karpov. Next came two goals in successive shifts, with Brendan Leipsic and Arkhip Nekolenko extending the lead in the 37th minute. 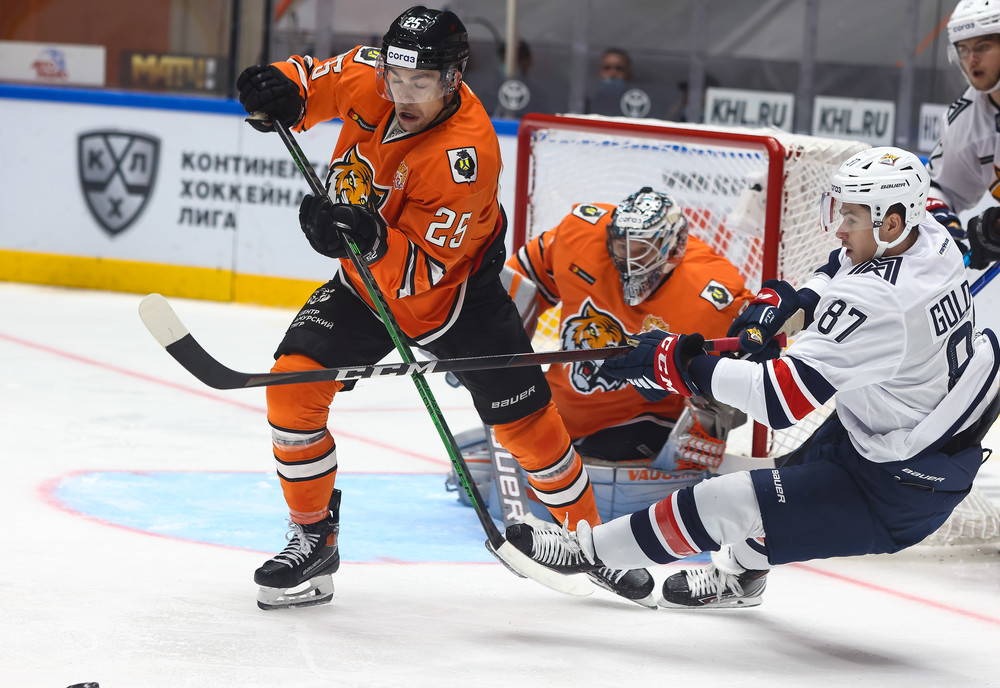 That put the outcome beyond question, but there was still time for another goal in the third. Semyon Koshelev potted a short-handed effort, adding insult to injury for Amur and wrapping up another high-scoring success for Magnitka.

Salavat Yulaev’s winning streak continues, but success #7 was a closer affair than Tomi Lamsa’s team is accustomed to. Dinamo was a hugely competitive opponent and kept this one alive until the bitter end, but Juha Metsola’s 21 saves held the visitor at bay and secured a narrow verdict.

It wasn’t so different at the other end, with Alexei Kolosov stopping 25 of the 26 efforts he faced. Crucially, though, the young Belarusian was beaten midway through the second period. For fans in Ufa, it was also reassuring to see the goalscorer — Markus Granlund, off a Teemu Hartikainen assist. Following Thursday’s 5-1 win over Kunlun Red Star, in which the Finns did not contribute a single point, Lamsa was asked about the slow (by their exalted standards) start to the season from his compatriots. The head coach was confident that there was no problem, just a slight hangover from a disrupted pre-season, and today he was proved correct. Hartikainen had already dinged the iron in the first period, and he led a breakout that concluded with a diagonal feed to pick out Granlund for a close-range finish.

The goal came after an extended penalty kill for the home team, with Minsk’s power play unit piling on the pressure and forcing Ufa’s defense to repeatedly block shots. And it was enough to secure the verdict, with Dinamo’s hopes of staging a late surge undermined when a too many men penalty late in the game spiked its guns.

Lokomotiv made it two wins from three after edgy a topsy-turvy affair against Torpedo. The Railwaymen were indebted to Reid Boucher, who got the first and last goals of this game, but Andrei Skabelka will surely have concerns about the way his team blew a 3-1 lead in the third period before grabbing a late winner.

It looked good for the host in the first period, with Boucher opening the scoring in the 10th minute. Play flowed from end to end before the American forward exchanged passes with Denis Alexeyev and produced a smart finish at the far post. Moments later, he was close to redirecting a powerful Maxim Shalunov effort into the net, but Torpedo got to the intermission with only one goal to make up.

And the visitor tied the game in the middle third when a power play saw Damir Zhafyarov get his first of the season. The forward, who missed much of the summer due to contract negotiations, failed to find the net in his first seven appearances this year; David Nemirovsky will hope that today’s marker is the start of a return to last season’s form. 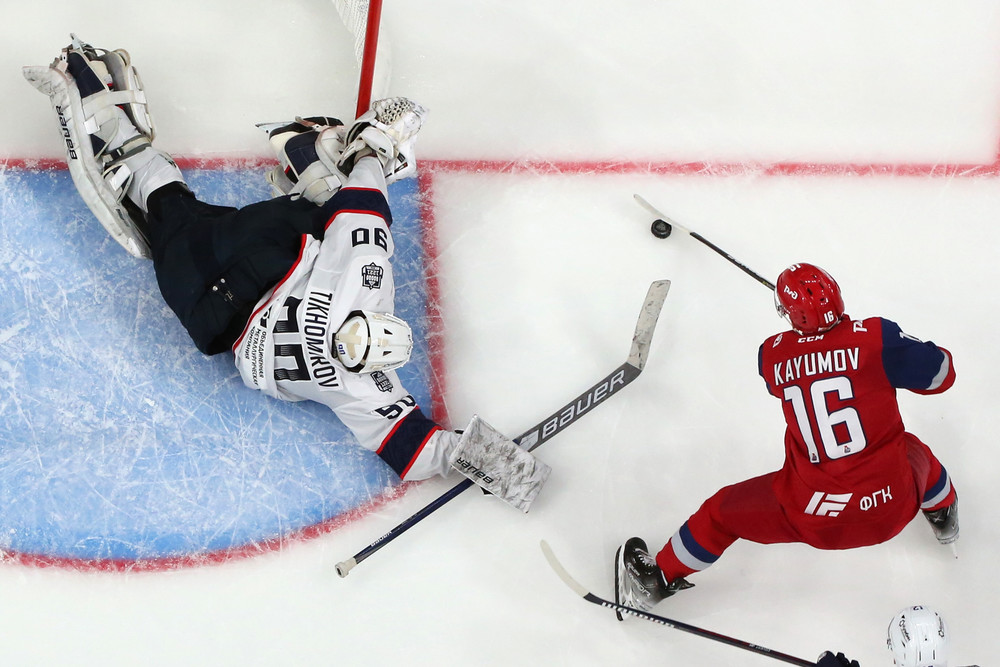 However, Nemirovsky and his team had more pressing concerns in the third period. Two goals in a minute saw Alexei Marchenko and Pavel Kraskovsky give Lokomotiv a seemingly commanding lead. Late in the game, though, the visitor responded with a double salvo of its own as Andy Miele and Kenny Agostino hauled the scores level with just over three minutes left to play. It was starting to look like overtime, but Boucher had other ideas and potted the winner in the 58th minute. Alexeyev assisted once again with good work behind the net and Boucher’s predatory instincts on the slot proved to be the difference between the teams.

Nikita Tertyshny continued his lively start to the season with a game-winning display for Traktor today. The 24-year-old forward had two goals and an assist as his team built a 3-0 lead over a Kunlun team that slipped to a third successive loss.

It took some time for the home team to get through a dogged Dragons rearguard. Traktor’s dominance of the first period went unrewarded as Alexander Lazushin came up big in the visitor’s net, and as the middle frame drew on the lack of a breakthrough was causing a flicker of concern among the Chelyabinsk crowd.

But two goals in 39 seconds changed all that. First a delicious pass from Tomas Hyka wrongfooted the Red Star defense and Nick Bailen took advantage to feed Tertyshny on the slot. Then, the same trio combined again with Bailen making it 2-0 before the opening goal announcement was finished. Tertyshny then potted his second of the game on a third-period power play to put the result beyond doubt. 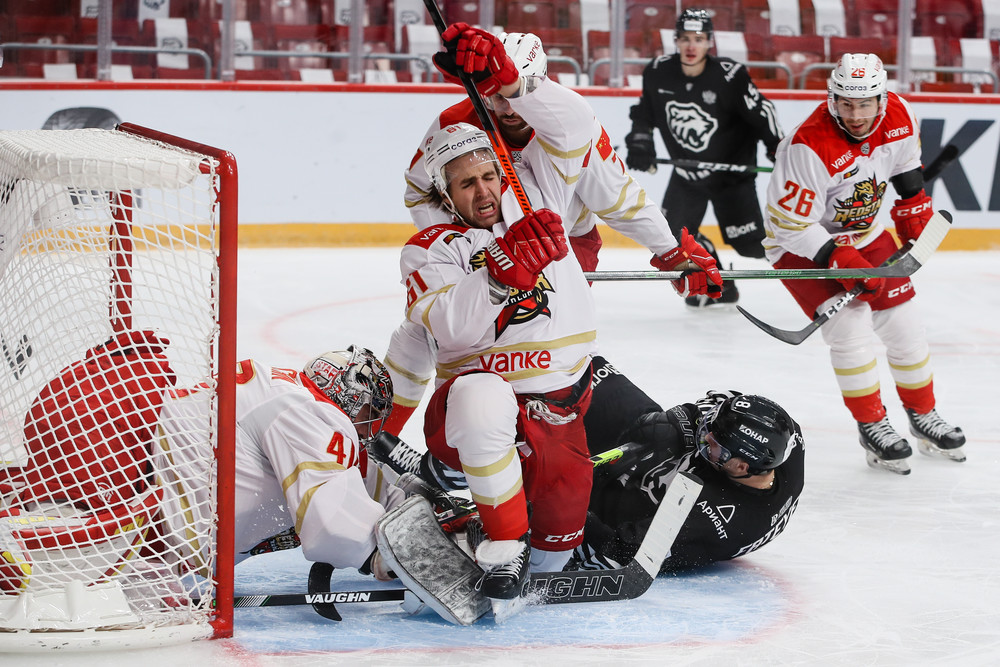 Red Star did have something to cheer from this game. Club captain Brandon Yip stuffed home his 50th goal for the Chinese franchise midway through the third period. It’s a significant landmark for a player who has a key role in his club and is expected to be a leader on China’s Olympic team later this season, but it wasn’t enough to change the course of this game. Teemu Pulkkinen’s empty-net goal merely rubber-stamped the home win as Traktor makes it five in a row.

Two teams in need of a victory met in Nizhnekamsk. The host’s promising start to the season was slowed by a three-game losing streak, while Vityaz suffered five losses since winning its opening game. Something had to give, and a strong third period from the home team ensured it was Neftekhimik that got back on form.

However, there might have been some foreboding at the first intermission. Although Neftekhimik had the better of the play early on, it trailed 0-1 at the break to a Daniel Audette goal steered home from close range after Viktor Antipin’s shot got away from Evgeny Ivannikov. The middle frame saw that early lead turn around: Timur Khafizov struck on the power play at the start of the session and Yegor Popov made it 2-1 midway through. However, a major penalty on Lukas Klok opened the door for Vityaz and Slava Leshchenko tied it up on the power play.

The game-breaking play arrived in the third. On 47:57 Neftekhimik regained the lead with a power play goal from home captain Marat Khairullin. He gathered a loose puck between the hash marks and immediately fired into the net through a crowd of players. Then Alexei Puzanov made it 4-2 just 33 seconds later when he converted an odd-man rush. Another power play marker, this time from Andrei Chivilyov, extended the lead still further.

Ak Bars made it three wins from four games, and Dmitry Kvartalnov’s team is showing signs of pulling out of its early-season skid. However, a second meeting with Sochi this week produced another hard-fought game against an opponent that has now lost six in a row, suggesting that not everything is yet going to plan in Kazan.

In many ways, Saturday’s performance was a dominant one. Ak Bars outshot Sochi, won significantly more face-offs (32-10) and laid 12 hits to the opposition’s three. Had the team been at the top of its game, it’s not hard to imagine a comfortable scoreline. Instead, though, it took a single goal to win this game and the outcome remained in the balance until the very end as Sochi stuck around and doggedly refused to roll over.

It took precisely 48 minutes for the home team to forge a breakthrough here. Kirill Petrov got the decisive goal, but it owed a huge amount to Par Lindholm. The Swedish center took matters into his own hands, grabbing the puck in center ice and slaloming his way through the visiting defense. Only a stumble could halt his progress and, as he fell, Lindholm’s pass set up Petrov for the only goal of the game.

That was good enough to lift Ak Bars to fourth in the Eastern Conference. However, there’s a sense that this team still has more to show this season.