Nikolai Prokhorkin celebrated his birthday with a game-winning goal as Avangard snapped its three-game losing streak to add to Avtomobilist’s uncertain form on home ice. Earlier in the day, Admiral recorded its first win of the season with a 4-1 success against Severstal.

Admiral got its first win since returning to the KHL, picking up a morale boosting victory over Severstal to snap a six-game losing streak. However, it’s fair to note that the Sailors had taken three of those six games to overtime, including its earlier meeting with Severstal. For Severstal, though, this tour of the Far East has not been a happy one: Andrei Razin’s team became Amur’s first victim of the campaign in its previous game.

In the first half of Friday’s action, Severstal looked the better team. However, it all changed when Admiral killed a double penalty in the second period and, after getting back to full strength, opened the scoring with a breakaway goal from Dmitry Sayustov. That changed the pattern of the game, and it wasn’t long before Dmitry Lugin doubled the home lead.

Early in the third, Evgeny Grachyov made it 3-0 before Joonas Nattinen got the visitor on the scoreboard and threatened to make a game of it. However, Libor Sulak’s empty-net goal ensured that the home team would get its first win of the season.

Avtomobilist returned to Yekaterinburg buoyed by a four-game winning streak on the road. However, back on home ice there was an all-too-familiar struggle for the Motormen. Bill Peters’ team lost its first two games in the Uralets Arena and that homesickness struck again here as Avangard claimed the verdict.

The first period was evenly matched. For all Avangard enjoyed an advantage in terms of shots on target, limiting the home team to just three efforts at Vasily Demchenko, both teams generated plenty of offense. However, the Hawks excelled on defense, blocking 12 of the 18 attempts from Avtomobilist. Then, with the first power play of the game, Sergei Tolchinsky opened the scoring when his one-timer from the top of the circle took everyone by surprise.

Tolchinsky was involved again in the second goal, placing a pass between two home defensemen for Nikolai Prokhorkin to skate through and score. The Avangard forward marked his 28th birthday by potting his second goal since joining the Hawks in a big trade that sent Denis Zernov to Magnitogorsk. 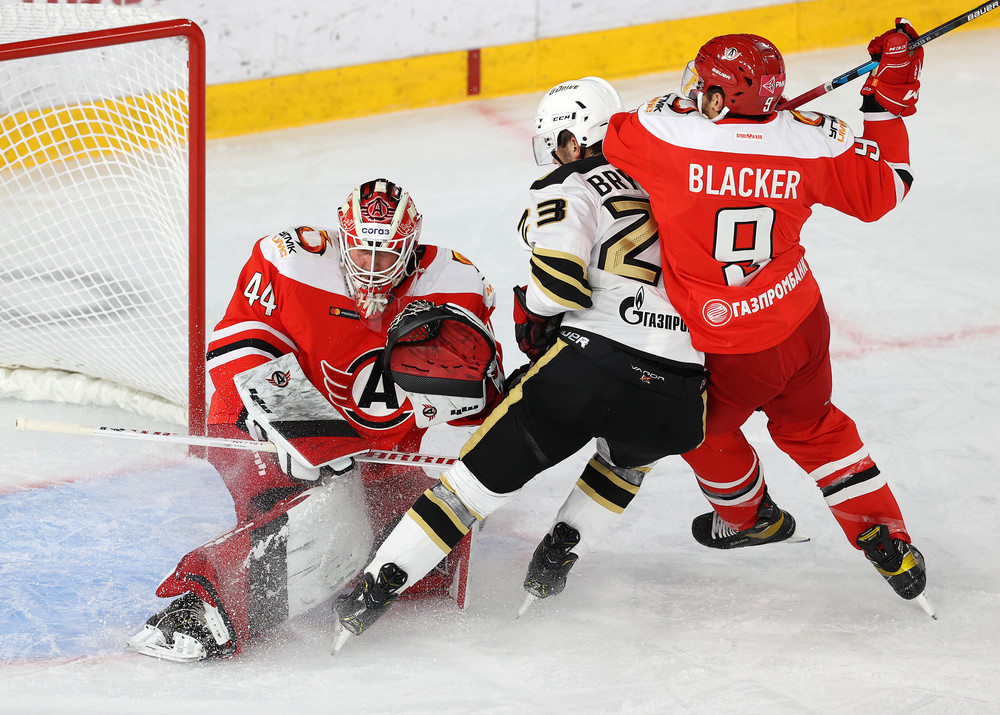 After that, Avtomobilist began to get more of a grip of the game but had to wait until early in the third before reducing the deficit. The goal went to Brooks Macek, whose initial shot bounced around the danger zone until the German international collected the rebound and slotted home to restore home hopes.

However, Avangard was not to be denied. Ivan Telegin found the net for the second game running to restore that two-goal lead as he screened Dmitry Shikin and then redirected Prokhorkin’s shot past the home goalie. That made it two from two for the Omsk power play as Bob Hartley’s team snapped a three-game skid.