A debut goal from Ivan Telegin was not enough for Avangard as it went down to a 4-7 loss at Metallurg. Earlier in the day, Amur got its first win of the season, beating Severstal 3-2.

Amur recorded its first victory of the season with David Tomasek having a hand in all three goals. The Czech forward assisted on the first two before scoring the winner himself to snap a five-game losing streak for the Tigers

That slow start to the season prompted head coach Vladimir Vorobyov to shuffle his pack. Kirill Slepets, Alexander Kuznetsov and Matvei Zaseda formed an all-new third line, while Vladimir Galuzin and Alexander Gorshkov were prominent absentees. Severstal limited itself to minor changes in the bottom six.

An early power play helped Amur to gain the early initiative, although Radan Lenc’s opening goal arrived with the teams already back to equal numbers. Severstal replied first through Nikita Guslistov, but the home team restored its lead, albeit fortuitously, when Sergei Tereshchenko’s shot bounced off the boards and deflected off an opponent’s skate on its way into the net.

Subsequently, both teams placed the emphasis on defense and the middle frame produced no further scoring. Early in the second, a power play goal from Jakob Stenqvist tied the scores once more, but Tomasek gave Amur the win when he intercepted the puck in his own zone and raced down the ice to beat Dmitry Shugayev.

Magnitka comes out on top in goal frenzy

A high-scoring roller-coaster of a game in Magnitogorsk saw Metallurg inflict a third successive defeat on Avangard. The defending KHL champion made changes for this game after losses against Dynamo and Jokerit. Summer signings Ivan Telegin and Damir Sharipzyanov were both selected for the first time, and both made a positive impact early in their Hawks’ debuts. But the home power play kept the game alive and Metallurg eventually overcame the visitor.

The first two periods were action packed. Avangard led on four separate occasions but found itself trailing at the second intermission. The opening goal arrived after barely a minute, with Telegin scoring on his first shift for the Hawks since joining from CSKA. Telegin, a hardworking center who played a big role for club and country in recent seasons, stuffed the puck home on the wraparound.

That lit the fuse on a flurry of goals. Metallurg tied it up midway through the first when Josh Currie squeezed a shot through a thicket of skates and sticks to leave Simon Hrubec bewildered. Avangard went back in front with a goal on a delayed penalty; this time Sharipzyanov was involved before Peter Cehlarik fired home a pass from Sergei Tolchinsky. But the defenseman was watching from the penalty box when Magnitka tied it up 16 seconds from the hooter. Linus Hultstrom’s shot was too hot for Hrubec to handle and Nikita Korostelyov tucked away the rebound. 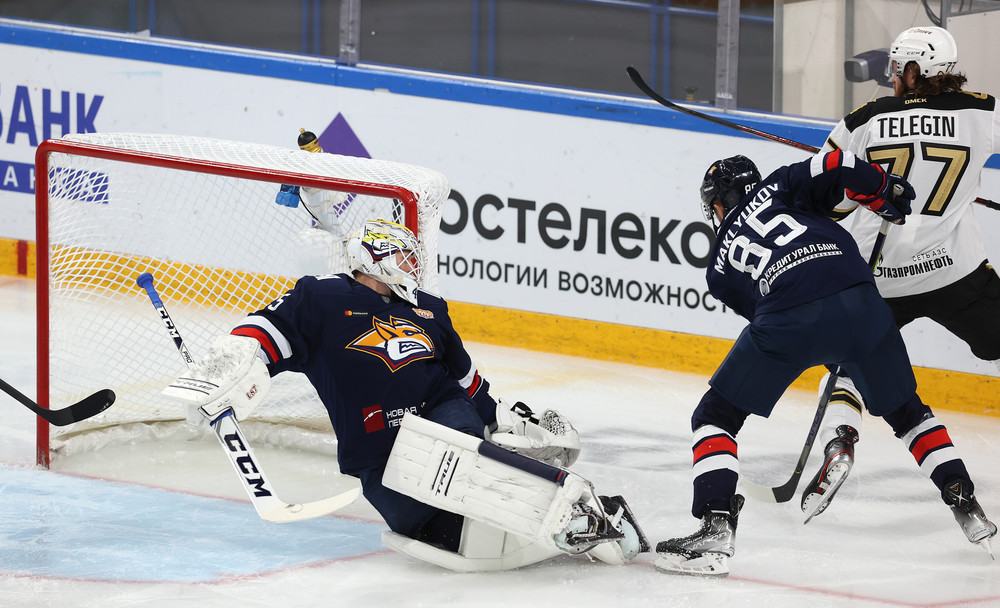 There was a 10-minute pause for breath at the start of the second period. The tempo of the game remained rapid, but we saw neither goal nor penalty until the 30-minute mark. Then Maxim Karpov sat for interference and Corban Knight scored from close in after Oliwer Kaski’s point shot. That lead lasted less than one minute before Semyon Koshelev unleashed a vicious one-timer to make it 3-3. Then came another quick exchange of goals, with Telegin setting up Alexei Bereglazov as the defensemen joined the Avangard offense, only for Anatoly Nikontsev to conjure up a highlight-reel moment and tie the scores at four.

Six seconds before the intermission, Metallurg went in front for the first time in the game. Once again, the goal came on the power play. This time Brendan Leipsic dumped the puck on the slot for Denis Zernov and Andrei Chibisov to fight over. The latter got the decisive blow, making it 5-4 after 40 minutes. And the home power play did its job once more midway through the third period, with Philippe Maillet and Nikolai Goldobin combining for Karpov to fire home from the right-hand circle.

That was the first time either team had enjoyed the comfort of a two-goal lead, and Metallurg had the added benefit of another power play following a failed bench challenge. Avangard, meanwhile, withdrew Hrubec and put Vasily Demchenko into the game; the 27-year-old former Traktor goalie made his first appearance for Avangard in the arena where he played part of last season. The netminder made a big save to stop Goldobin’s one-on-one break in the closing moments, but the home forward went behind the net to retrieve the puck and claim his team’s seventh of an enthralling game.