Vadim Shipachyov’s two assists for Dynamo set a new KHL record. The Blue-and-Whites’ captain moves to 510 helpers, breaking Sergei Mozyakin’s mark of 509. Dynamo won 5-3 at Admiral. There was a high-scoring game in Moscow, where Barys won 6-3 at CSKA. SKA blanked Spartak once again to win 2-0 in the capital. Elsewhere, Avtomobilist enjoyed a big win at Kunlun Red Star, Traktor came from behind to beat Vityaz and Steven Kampfer was the last-minute hero as Ak Bars edged Sochi in a shoot-out.

Vadim Shipachyov recorded his 510th assist in KHL play, overtaking Sergei Mozyakin’s record. Dynamo’s captain had two helpers in this game before finishing it off with his team’s fifth goal, breaking through the 750-point barrier before securing his position as the top assist-maker in KHL history.

However, Shipachyov was not the only player to produce an eye-catching performance in a game that might have brought Admiral its first victory since returning to the league. The Sailors got in front late in the first period on a power play goal from Vladislav Ushenin. Then, midway through the second period, former Dynamo man Mark Verba restored that lead after Dmitry Rashevsky tied the scores. 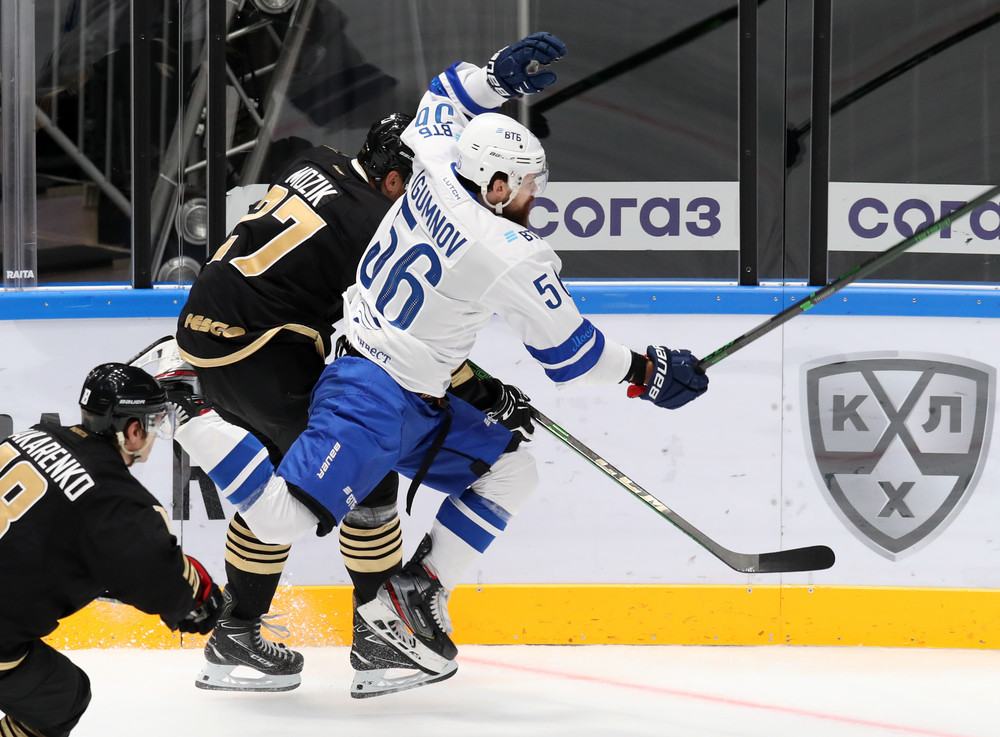 It wasn’t until the third frame that the visitor took control of the game and secured its fifth win from five games this season. Shipachyov was instrumental. First, his shot was blocked by Ivan Nalimov, but Stanislav Galiyev potted the rebound. Then, three minutes later, his pass set up Rashevsky for the go-ahead goal. 510 KHL assists for Shipachyov, a second goal in this game for Rashevsky.

Admiral had one last punch to swing, and Verba delivered it for his second goal but with the game locked at 3-3, Dynamo came up with the knock-out blow. Nikolai Chebykin, a hat-trick hero last time out, grabbed the game winner with 71 seconds on the clock and Shipachyov boosted his stats still further with an empty net goal to seal the verdict.

Three goals in three minutes at the start of the third period heralded a blistering turnaround in this game as Barys completed a fightback from 0-2 down to stun CSKA.

Jacob Berglund started the goal rush with his first marker since joining the Kazakh team, and subsequently the Army Men contributed to their own downfall. An unsuccessful challenge on the Berglund goal handed Barys a power play, converted within 30 seconds by Darren Dietz. Then, before the visitor’s celebrations died down, Nikita Nesterov took a holding call and Dietz got his second power play goal of the game.

Earlier, Nesterov played a big part as CSKA jumped to a 2-0 lead in the first period when he opened the scoring midway through the frame on a power play. Anton Slepyshev was among the assists on that play and he doubled the lead a couple of minutes later as the home team looked to be cruising to victory. 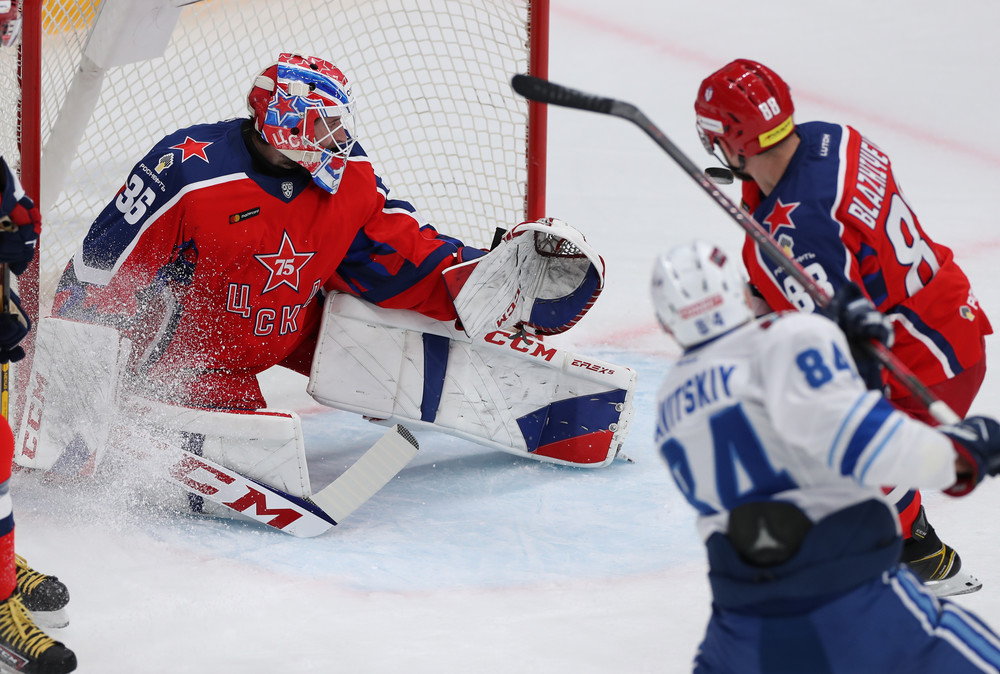 However, despite a solid lead for the host, there was plenty for Barys to be optimistic about. The visitor outshot CSKA and, were it not for a succession of big blocks by the home defense, might have had a greater lead on that stat. The pattern continued in the second stanza with reward coming midway through when Curtis Valk pulled a goal back.

Then came that three-goal flurry to turn the game upside down. True, CSKA responded quickly with young Matvei Guskov continuing his bright start to the season and making it 3-4. But Barys did not crumble, and restored a two-goal advantage through Alikhan Asetov midway through the third. And there was still time for Jakob Lilja to finish it off with an empty net goal in the last second of play.

SKA snapped a two-game losing streak and inflicted a first home loss of the season on Spartak. And, in what is becoming a tradition between these teams, the Army Men denied the Muscovites even a consolation goal. This is the fourth consecutive time SKA has shut-out Spartak with an aggregate score of 0-10.

The home team was hampered by the absence of Jori Lehtera. The Finnish center, once of SKA, was ruled out due to injury and Gleb Shashkov took his place on the first line. However, that did not immediately damage the Spartak offense. In the first period, although neither team was able to take full control of the game, the Red-and-Whites showed greater poise in their attacking play. SKA, by contrast, tended to turn the puck over too frequently and that restricted its chances of pressuring the host. 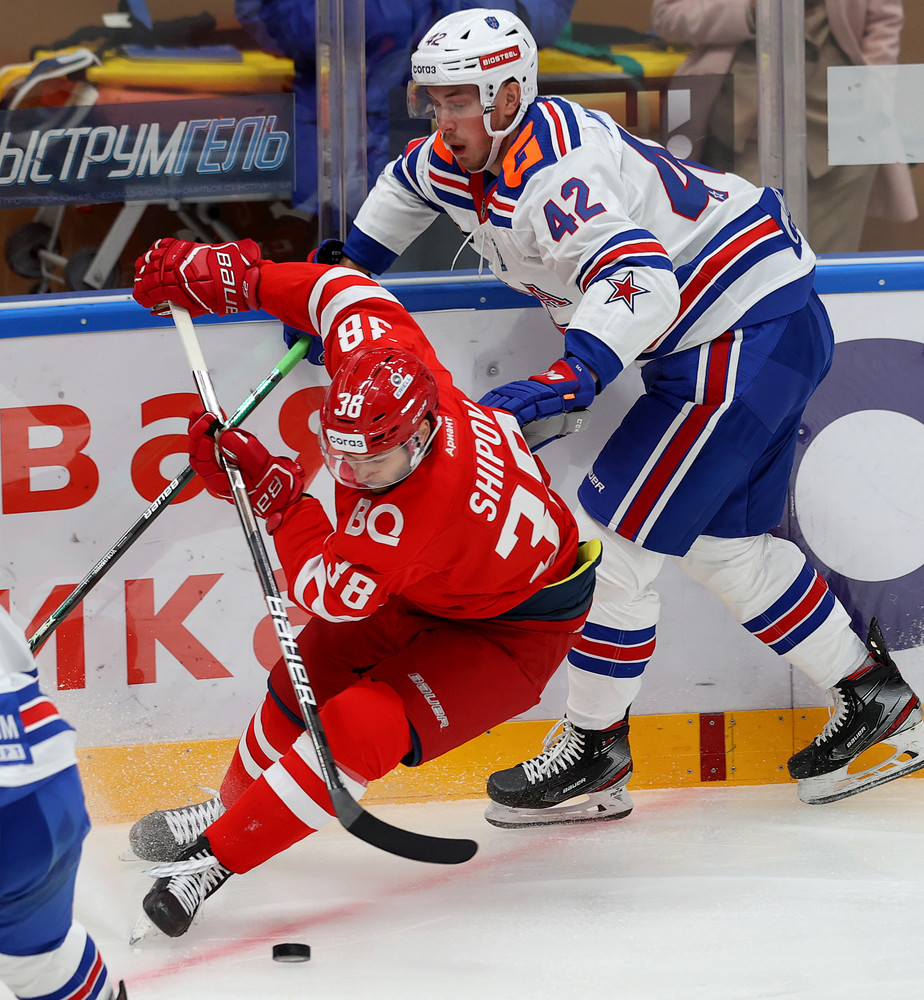 However, it was SKA that went ahead in the second stanza — and it all stemmed from a turnover in the Spartak defense. Mikhail Mamkin failed to complete a pass from behind his own net and presented the puck to Andrei Kuzmenko. Gratefully accepting the gift, Kuzmenko found Anton Burdasov who gave goalie Oscar Dansk no chance. Late in the frame, SKA doubled its lead when Kirill Marchenko quickly converted a power play following Alexander Khokhlachyov’s foul.

That was the end of the scoring with Lars Johansson finishing the evening with 30 saves and his first shut-out since swapping CSKA for SKA. The two teams are now tied on eight points each.

Ak Bars’ sluggish start to the season was followed by an unexpected change at the Kazan club — the organization announced that it was disbanding its cheerleading troupe. That news got a mixed reaction, including a tongue-in-cheek invitation from Sochi for the girls to come and perform at this evening’s game.

On the ice, though, the Eastern Conference power house continued to short-circuit in the early stages of this game and needed a last-gasp goal to escape defeat in regulation.

In the first period, Sochi — a team whose modest start is more in keeping with expectations — had the better of the game and got in front thanks to a good goal from Artyom Nikolayev. He got away from the defense to launched a one-on-one break, then fired a powerful shot beyond Timur Bilyalov. Nikolayev is one of several youngsters who moved from SKA to Sochi in the summer; the 21-year-old already has two KHL goals to his credit for his new employer. Ak Bars, meanwhile, struggled to get its game together in the opening frame. Early penalties on Artyom Lukoyanov and Alexander Burmistrov left the visitor with just three skaters for a time and that rather set the tone for the first period.

Lukoyanov made a more positive contribution at the start of the second when he tied the scores. However, Ak Bars was unable to capitalize on that and the game remained deadlocked until late in the third stanza. A goal from Vasily Glotov after 56 minutes looked to have won it for Sochi, but Ak Bars saved itself when Steven Kampfer struck with 36 seconds left to play. Kampfer, who was so impressive in pre-season, collected his first goal of the season — and it was a vital one.

Overtime could not separate the teams, but in the shoot-out Kampfer returned to give Ak Bars something to cheer with the decisive tally. The Kazan team collected only its third win in seven games while Sochi suffers a second successive shoot-out loss and a fourth defeat of the season.

Motormen win four in a row

Avtomobilist’s impressive form on the road continued with a convincing victory at Kunlun Red Star. Today’s 5-1 verdict makes it four in succession for Bill Peters’ team, which now returns home for games against CSKA and Avangard at the end of the week.

The first period saw Avtomobilist take the lead midway through when Alexander Shchemerov’s point shot found its way past Alexander Lazushin in the home net. After that, though, the Motormen ran into penalty trouble and a third power play chance of the evening enabled Red Star to tie the game thanks to Luke Lockhart’s third goal of the season.

In the second period, once again, the officials influenced proceedings. Avto regained the lead early on thanks to a power play goal from Stephane Da Costa; the Frenchman maintained his goal-a-game start to the campaign when he thumped home a one-timer from Ryan Spooner’s cross-ice pass. But the Dragons had a great chance to tie the scores through Tyler Wong. His initial run, studded with tricky stick handling, was too much for the visiting D and Stanislav Bocharov hauled him down. Wong then got up to take the penalty shot, only to find ex-Red Star goalie Dmitry Shikin had read that move before and shut the door on his former team-mate.

At the start of the third, Avtomobilist extended its lead with Spooner involved again. This time he led an odd-man rush and set up strike partner Shane Prince to make it 3-1. The home team’s problems got worse when Brandon Yip was called for tripping on the next shift and, after killing that penalty, the Dragons slipped to 1-4 when Dmitry Zhukenov dived onto the rebound from Nikita Tryamkin’s point shot to score his first of the season.

Red Star head coach Ivano Zanatta pulled goalie Lazushin with more than three minutes to play, but that could not change the outcome. Brooks Macek hit the post before Danil Romantsev completed the scoring late on.

Two goals from defenseman Albert Yarullin late in the third period helped Traktor to a come-from-behind victory at Vityaz. The former Ak Bars man was brought to Chelyabinsk to add both defensive strength and additional scoring from the blue line — and tonight he did that to game-winning effect.

Initially, though, Vityaz had the better of the game. The home team jumped to a 2-0 lead in the first period on goals from Fyodor Malekhin and Alexander Yaremchuk. The first came on the power play, the second was created by Kirill Lyamin jumping out of the box and starting the attack that led to Yaremchuk’s goal.

In the middle frame, though, Traktor hit back. Lukas Sedlak halved the deficit early on and Teemu Pulkkinen tied it up 93 seconds before the intermission. The visitor had much the better of the play through the session and deserved to be level at the break.

The third period was far more evenly-contested, but a power play chance for Traktor gave Yarullin his first goal in the 54th minute. That lead was short-lived, with Daniel Audette responding on a power play at the other end. But Yarullin and Traktor would not be denied and the defenseman got his second, decisive tally in the 59th minute.