Alexei Murygin made his first KHL appearance since overcoming cancer, coming off the bench for the third period of Torpedo’s game against SKA and backstopping the team to a 3-2 win. Elsewhere, Nikolai Chebykin’s hat-trick saw Dynamo Moscow to a big win at Amur, Avtomobilist edged a shoot-out verdict at Vityaz and Dinamo Minsk caught fire in the third period to defeat Ak Bars.

Nikolai Chebykin’s first KHL hat-trick led Dynamo to a fourth successive victory this season, proving that the Blue-and-White offense is about more than Vadim Shipachyov. In the Muscovites’ first three wins of the season, club captain Shipachyov had 8 (6+2) points. Today he was limited to a single helper, but moves to 749 points in the KHL and is now one short of Sergei Mozyakin’s league record for assists (509 against Shipachyov’s 508).

Dynamo made a lying start to this game, with Stanislav Galiyev opening the scoring after just 13 seconds. That’s the fastest goal so far this season. Amur tied it up when an error by Shipachyov presented Alexander Sharov with a goal but regained the lead midway through the frame when Chebykin got his first of the game. 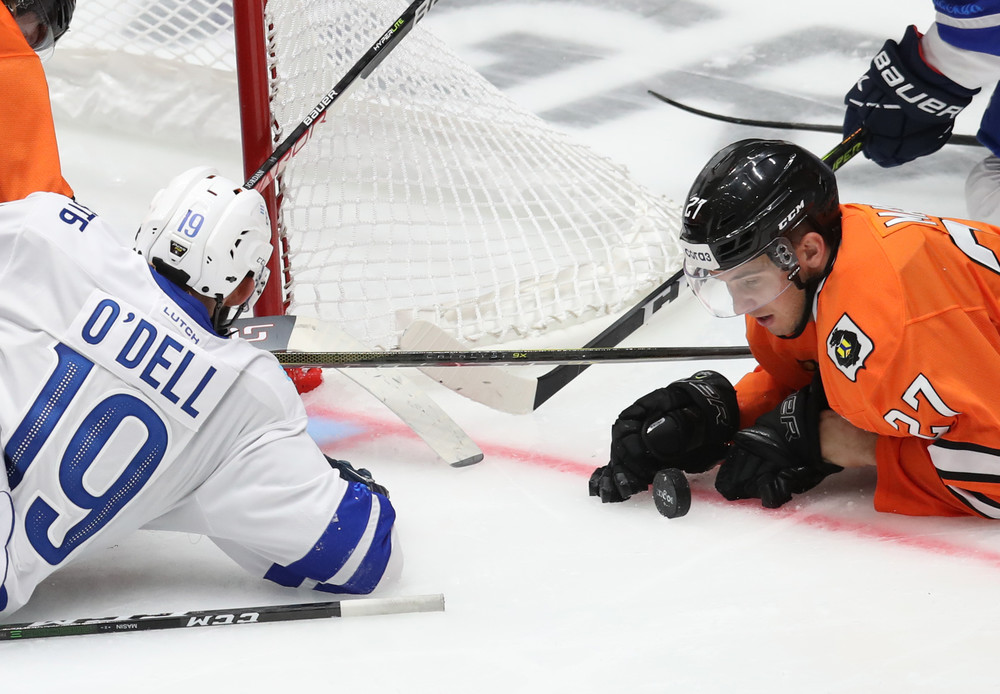 At the start of the second, Amur tied the scores again but that was as good as it got for the Tigers. Midway through the session, Nikita Novikov’s first KHL goal restored Dynamo’s lead and that proved to be the winner. However, there was plenty more to come from the visitor. Early in the third, a 5-on-3 power play brought Eric O’Dell his first goal since moving to Moscow. Shipachyov got an assist to extend his productive streak, while Slava Voynov contributed his third helper of the game.

A hat-trick of assists was trumped by Chebykin’s hat-trick of goals. In the closing stages, the 24-year-old scored twice on the power play. After just two goals in his KHL career before today, the forward hit a personal high as Dynamo keeps up its winning start.

Alexei Murygin returned to the ice for the first time in the KHL since Jan. 24, 2019, and rubber-stamped his recovery from cancer by closing out a win for his new club. The former Lokomotiv shot-stopper, who set a KHL shut-out record with the Railwaymen, spent more than two years battling serious illness but got himself back not just to full health, but to full sporting fitness.

This season, Murygin is largely expected to feature as Torpedo’s third goalie, providing the experience to support Andrei Tikhomirov and Pyotr Kochetkov. Today, though, he made a brief appearance in the first period while Tikhomirov adjusted his kit then, after the starter played the bulk of the first 40 minutes, Murygin returned for the third frame.

The home team made a great start, getting an early power play and taking the lead on Theodor Lennstrom’s second-minute opener. The Swede collected Kenny Agostino’s pass on the blue line and saw his deflected shot beat Alexander Samonov. However, SKA was soon back in the game. Torpedo managed to kill a penalty but Georgy Misharin had barely got out of the box before he saw Evgeny Timkin fire home the tying goal. In response, Marek Hrivik struck twice for Torpedo to open a 3-1 lead at the first intermission. 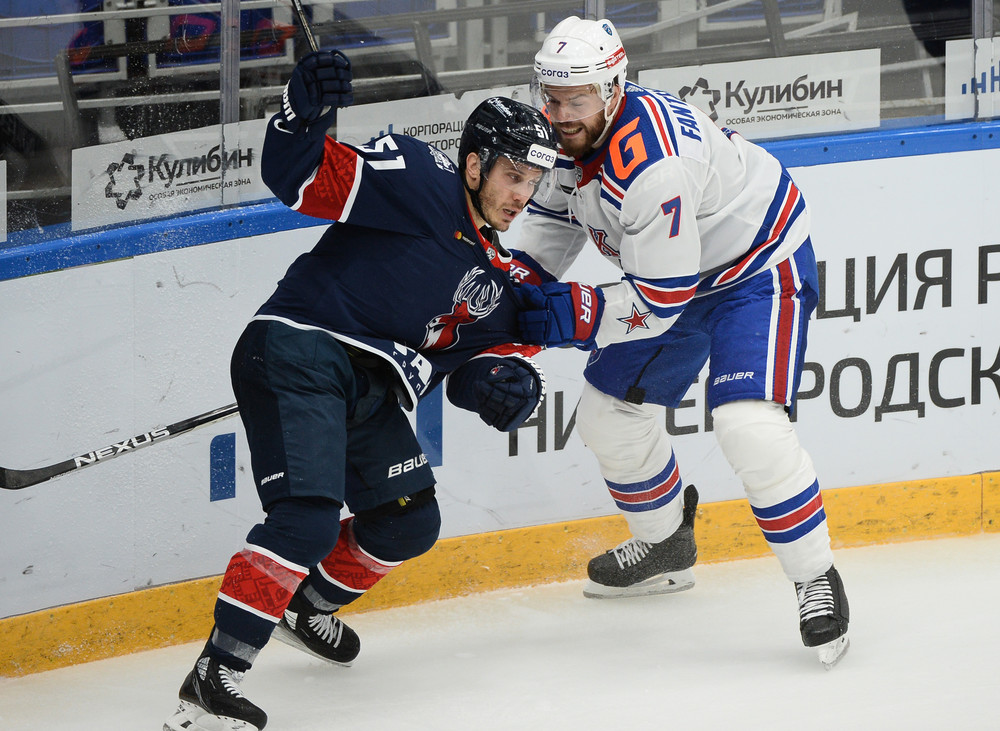 The middle frame saw SKA pull a goal back early on. Again, Torpedo’s penalty kill kept the visitor at bay, only for the Army Men to strike at equal strength. This time, it was Mikhail Vorobyov who found the net off an Andrei Kuzmenko feed. The 24-year-old potted his second for SKA since moving from Salavat Yulaev in the summer. Torpedo then survived a 3-on-5 situation late in the middle frame.

Murygin came into the game for the final stanza with every reason to expect a busy return to action. In the event, though, SKA was limited to just seven shots on target. The visitor was hampered by two penalties in the third period, and encountered a home team that established a strong forecheck as it closed out the game to give Torpedo back-to-back wins for the first time this season.

Kazan’s uneven start to the season continued with a defeat in Minsk. Dinamo produced a powerful performance in the third period to turn this game around and send Ak Bars spinning to a fourth loss in six games.

Malte Stromwall, recently signed from SKA, was the key player for Minsk. In only his second game for his new team, he scored twice to pace a home win. The Swede opened the scoring late in the first period with a power play goal. That should have been the final significant action of an opening frame that produced few clear-cut chances. However, right on the hooter, Steven Kampfer was removed from the game for hooking, adding to Ak Bars’ woes.

The visitor killed the major penalty that started the second period and, once back at full strength, quickly turned the scoreboard around. Alexander Burmistrov tied it up, then Dmitry Kagarlitsky struck on the power play barely a minute later. Despite his team’s indifferent form, Kagarlitsky has three goals in six games since his move from Dynamo Moscow.

But this time, his efforts were not enough to bring Ak Bars the win. Dinamo regrouped and took control of the game in the third period. Vladimir Alistrov tied the scores in the 47th minute with his first goal of the season. Then came Stromwall again, potting his second of the night to make it 3-2. That proved to be the game winner, but there was still time for Alistrov to complete his double late in the game before Taylor Beck wrapped it up with an empty-netter.

Motormen keep winning on the road

Avtomobilist posted a third straight road win in a rollercoaster of a clash in Podolsk. The visitor blew a 2-0 lead and looked to be heading for defeat until Georgy Belousov’s goal 71 seconds from the end. Instead, the game went all the way to a shoot-out before Stanislav Bocharov decided it for the Motormen.

Vityaz was chasing its first win since a buccaneering 6-3 success at Torpedo in its opening game but struggled to generate offense in the early stages of Sunday’s game. The home team managed just three shots at Vladimir Galkin in the first period, and fell behind to a power play goal from Ryan Spooner at the other end. The second session followed a similar pattern, with neither side forcing the goalies into a particularly heavy workload. Again, though, Avtomobilist proved more clinical and Maxim Rasseikin extended the lead midway through the frame. 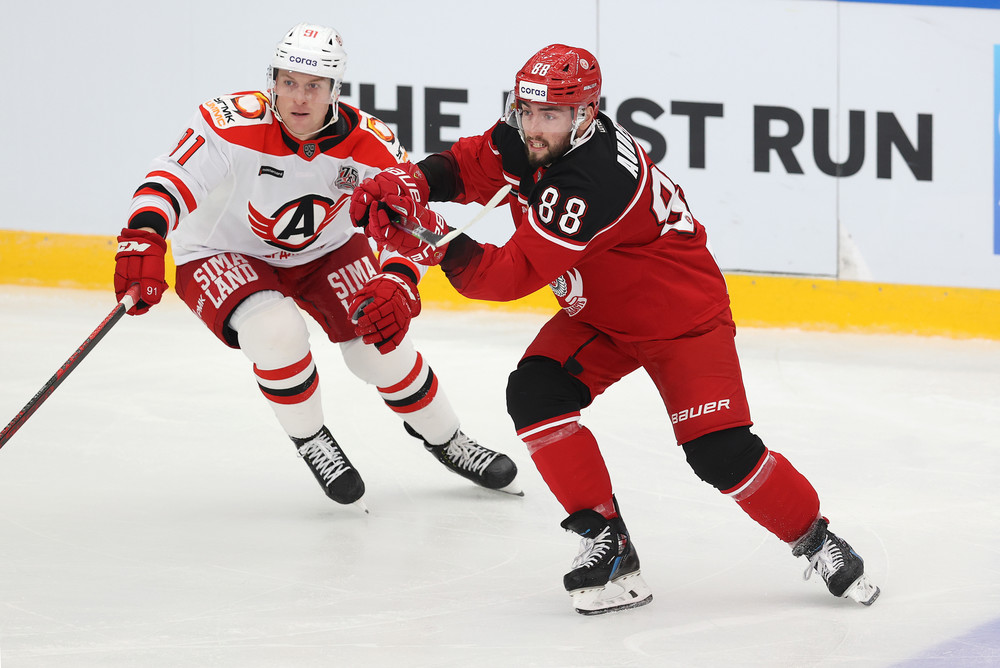 It all changed in the third. Belatedly, Vityaz found the attacking spark it had missed for 40 minutes. Niko Ojamaki set up Miks Indrasis for the first goal in the 44th minute, then the Finn tied it up on the power play with assists from his compatriots Miro Aaltonen and Valtteri Kemilainen. Now, the momentum was with the host and Fyodor Malykhin made it 3-2 with a redirect on a Kemilainen shot on 56:19.

Stung, Avtomobilist stepped up in search of salvation. With Galkin withdrawn in favor of a sixth skater, Belousov grabbed that game-saving goal. The job was not yet done — the visitor had to kill a penalty in the last minute of regulation and opening exchanges of overtime, then saw Danil Romantsev take a penalty in the extras. But Galkin kept Vityaz at bay in both overtime and the shoot-out to secure the verdict.