Pre-season speculation suggested that CSKA vs Lokomotiv might be a key battle among the top pretenders for the Western Conference lead. That may well prove to be the case, but today’s battle went decisively in favor of the Army Men, while the Railwaymen are yet to build up a head of steam this season. Elsewhere, Metallurg edged an overtime win over Admiral, Ak Bars did likewise at Vityaz and Avtomobilist won on the road in Minsk.

CSKA secured a fourth successive victory thanks to a strong display from its power play. Sergei Fedorov’s team climbs to the top of the Western Conference — albeit having played two games more than second-placed Dynamo — and draws level with overall leader Salavat Yulaev on eight point.

For Lokomotiv, though, the season has not started as planned. Defeat here leaves Andrei Skabelka’s team with just three points from four games and languishing in 10th place in the west. After the high-profile signings of Maxim Shalunov and Reid Boucher, that represents serious underperformance for the Railwaymen.

CSKA got off to a good start, taking the game to Loko from the opening moments. Eddie Pasquale produced an early candidate for save of the season midway through the first, scooping the puck off the goal line as he sprawled across the paint. But that was merely a temporary reprieve: penalty trouble saw Loko allow two goals in 28 seconds as Swedish duo Viktor Svedberg and Lucas Wallmark punished Pavel Kudryavtsev’s double minor for high sticks. 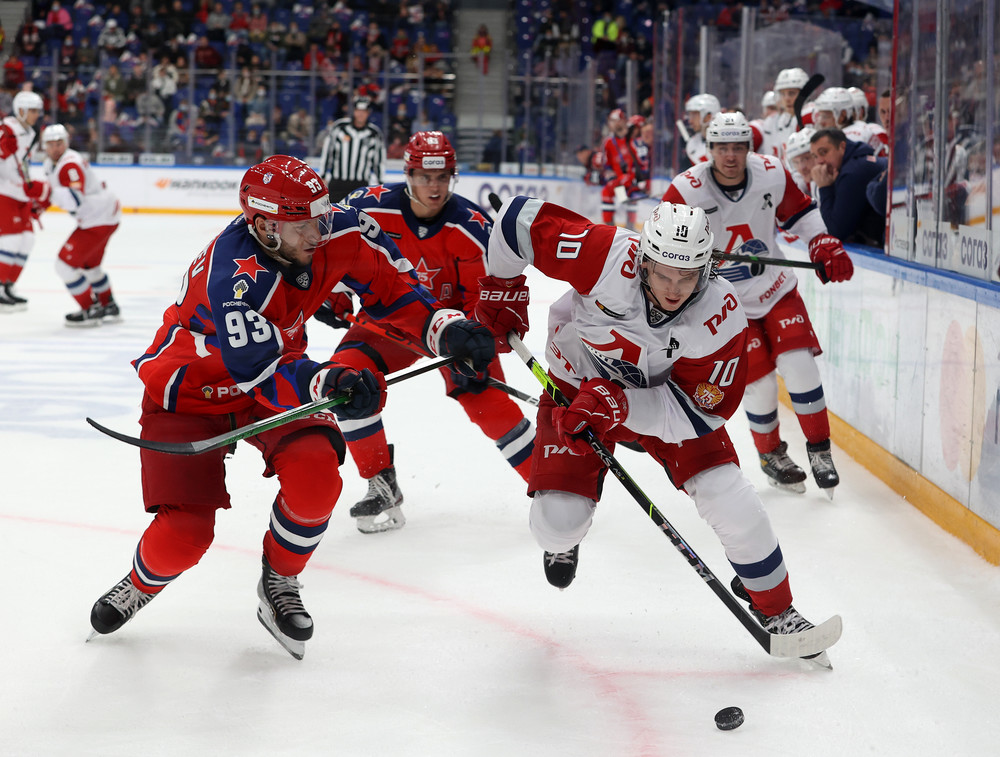 Another power play at the start of the second period saw the home team extend that lead with young Matvei Guskov on target again. That prompted Lokomotiv to move to all-out attack and from the midway point, it was one-way traffic towards Ivan Fedotov’s net. However, by the time Boucher got his team on the scoreboard there were just 13 seconds left in the middle frame.

The third period summed up the difference between the teams. After CSKA’s power play ruthlessly plundered three goals, Loko had three opportunities in quick succession to capitalize on a man advantage. However, the visitor was unable to do so and the Army Men continued their winning march.

Kristian Khenkel’s overtime goal gave Ak Bars the verdict here, snapping a three-game losing streak for Dmitry Kvartalnov’s team. Khenkel got the redirect on a Dmitry Kagarlitsky shot to break a 1-1 tie and ease some of the pressure on one of the under-performers in this early stage of the season.

With Ak Bars struggling for form, Khenkel’s return to the blue line after injury was a welcome boost. Kirill Petrov also returned to the team, with Daniil Tarasov and Jordan Weal making way. Vityaz, beaten in overtime in its last two games, shuffled around four forwards.

In the first period, Ak Bars looked to take the game to Vityaz. The opening exchanges were cautious, but once the action began to warm up it was the visitor that took the initiative. First, Par Lindholm stepped up from the blue line to fire in a shot that whistled past a defenseman and then went through Ilya Ezhov’s pads to open the scoring. A minute later, Stanislav Artyom thought he had doubled the lead when he batted down a shot from deep. This time, though, the video review ruled that Galimov’s stick was high and it remained a one-goal game. 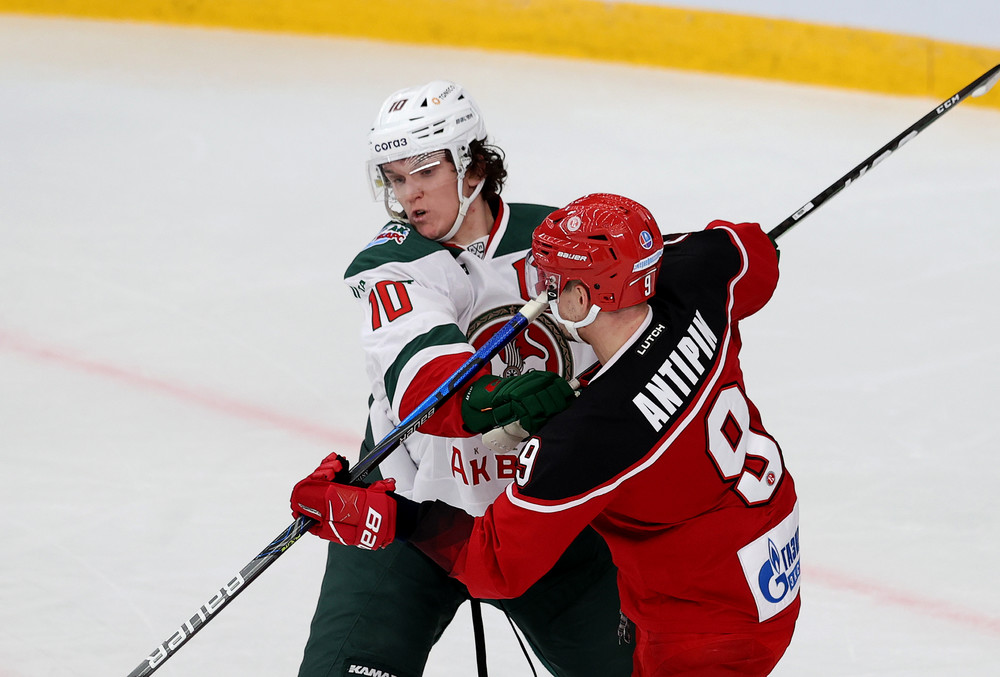 The second period brought no further scoring, although both teams showed some plenty of offensive endeavor. However, play was disrupted by frequent penalties and, while Valtteri Kemilainen was a lively contributor for Vityaz, he could not find a way past Igor Bobkov.

In the third, the home power play finally delivered. The tying goal came in the 46th minute when Daniel Audette smashed home a one-timer off Niko Ojamaki’s feed. Ak Bars subsequently had the better of the play, but Ezhov was able to stop everything that came his way until Khenkel’s game-winner.

After suffering an embarrassingly heavy defeat at home to Salavat Yulaev last time out, Metallurg needed a big response. However, for much of this game Magnitka was in danger of another disappointing result, and only a dramatic late recovery saved the home team from further embarrassment.

Initially, Ilya Vorobyov’s reshuffled team seemed to be working as hoped: Maxim Karpov fired home a fifth-minute goal, settling some early nerves for the home team. Metallurg continued to keep visiting goalie Ivan Nalimov busy in the opening exchanges, but could not increase its lead and was pegged back by Andrei Obidin’s goal.

After that, Metallurg had plenty of power play chances but could not find the breakthrough. Twice, Nalimov was saved by the piping as the pressure mounted. Yet, when a goal seemed inevitable, it came at the other end. An Admiral power play saw Rihards Bukarts jump on a rebound to score and his effort survived a bench challenge about goalie interference.

In the third, it was clear that Admiral was looking to close out the game. However, a lack of communication among the home players handed a great chance to Mikhail Kotlyarevsky, who beat Juho Olkinuora to make it 3-1. The Finn was replaced by Vasily Koshechkin as the Metallurg bench looked for any possible stimulus to save the game ... and a frantic finale provided the result Vorobyov & Co. wanted. Karpov got his second of the game to restore hope, then Philippe Maillet stuffed one home with two minutes left as his team played 6-on-4.

The deal was sealed in overtime, when Nikita Korostelyov potted the winner to complete a dramatic comeback win.

Traktor and overtime seem to go together this season — today’s game was the third time in four that the Chelyabinsk team went the distance. In Cherepovets, it took a shoot-out to separate the teams, with the visitor eventually taking the verdict.

Traktor took the lead late in the first period through Andrei Stas, which was just about a fair reward for the visitor’s performance in an opening session full of attacking enterprise. The second stanza, though, was very different. Severstal enjoyed the bulk of the play, but struggled to create clear-cut chances. Out of 21 goal attempts, on five required the intervention of Roman Will in the visitor’s net. However, one of that quintet was good enough to beat the goaltender and Adam Liska tied the game.

The third period was similarly short of clear cut chances, but this time it was the home defense that had to put a shift in. Severstal blocked 10 shots in the frame to keep Traktor at bay and then began overtime on the power play after a late ‘too many men’ call.

In the extras, we had a taster of the shoot-out to follow when Traktor’s Vitaly Abramov was called for tripping and a penalty shot was awarded. However, Igor Geraskin could not take the chance and the game could not be settled inside 65 minutes.

Will was beaten in the first duel of the shoot-out, Yegor Morozov putting the puck in the Traktor net. And, with a do-or-die effort on Severstal’s fifth attempt, Geraskin unlocked the visiting goalie. However, Tomas Hyka stepped up to win it for Traktor as Anvar Gatiyatullin’s team made it three wins from four.

A team called Avtomobilist, logically, should enjoy life on the road. This season, certainly, that’s been true for the Motormen. After losing its opening two games on home ice, Bill Peters’ team has rallied to win at SKA and now Dinamo. Apparently, wanderlust is a big motivation in the Urals.

For Dinamo, this was the first home game of the season. After a disappointing loss at Dynamo Moscow to start proceedings, Craig Woodcroft’s team responded with good wins at Severstal and Lokomotiv. Optimism was high in Belarus, but Avtomobilist responded with an impressive performance that quieted the home offense, doused the passions of an 8,000-strong COVID-reduced crowd and secured a 2-1 victory.

The first period offered few clear cut opportunities, although Alexei Kolosov was the busier of the two goalies. In the second, Avto started to find its shooting range, getting 17 efforts on target and taking the lead thanks to Stephane Da Costa in the 34th minute. The Frenchman found the net for the third game in a row and that kind of form explains why the club wanted him back in Yekaterinburg after a season with Ak Bars.

At the start of the third, the visitor struck the killer blow when Danil Romantsev doubled the lead inside two minutes. Dinamo’s hopes of raising the tempo and saving the game ran into a brick wall as the Motormen worked hard on defense to close down scoring chances. A misconduct penalty for Taylor Beck did not enhanced Dinamo’s prospects, robbing the team of a key forward for the closing minutes of play. The was time for one goal, Vladislav Yeryomenko scoring with 40 seconds left, a minute after Kolosov headed to the bench. But when Avtomobilist won the face-off at the restart, there simply wasn’t time enough for the Bison to save the game.