Tuesday’s KHL program was dominated by the 10th anniversary of the Lokomotiv air disaster. All eyes were on Arena-2000 in Yaroslavl, where Loko played on Sep. 7 for the first time since the tragedy. On an emotional evening, the Railwaymen lost out 3-4 to Dinamo Minsk ... but for most, the result was of little importance.

Elsewhere, Teemu Hartikainen became the KHL’s top-scoring Finn, collecting his 396th point in a big win at Metallurg, while Trevor Murphy was instrumental in Sibir’s first win of the season away at Torpedo.

Another record for Hartikainen

Teemu Hartikainen became the KHL’s all-time leading Finnish scorer after collecting his 396th point in this game. He helped Salavat Yulaev wreck Vasily Koshechkin’s party, as the Metallurg goalie’s 700th KHL appearance turned into a day to forget for his team.

On this day of remembrance, 10 years after the Yaroslavl air disaster, Magnitogorsk paid its respects. In one sector of the arena, 44 Lokomotiv scarves were laid out in memory of the 44 people who died in the plane crash, and the action was preceded by a minute’s silence. The date is particularly sensitive for Metallurg head coach Ilya Vorobyov, who was coaching in the Lokomotiv system at the time and admits that the pain has not eased with the passing years.

Back in the present day, though, it was Salavat Yulaev that got off to the faster start. In the seventh minute, Nikolai Kulemin — a product of Magnitka’s hockey school and a Metallurg player last season, gave the visitor the lead after the puck bounced off the back boards. That’s a fourth goal in three games for Kulemin, who appears revitalized by his change of scenery.

It might have been worse for the home team had Koshechkin not been on top of his game in the first period. The veteran goalie produced several big stops to keep the score to 1-0. However, he was beaten twice more in the middle frame as Alexei Pustozyorov and Artyom Pimenov extended Ufa’s lead. As the host got frustrated, Josh Currie got into a fight with Grigory Panin after slamming Geoff Platt into the boards.

That left Metallurg with a major penalty to kill, which the home team managed to do. However, a shorthanded goal from Danil Bashkirov at the start of the third added to home woes. True, a couple of power play efforts from Nikita Korostelyov — deflected home off his shoulder — and Brendan Leipsic made the scoreboard more competitive. However, when Hartikainen struck to make it 5-2 he both decided the outcome of the game and wrote his name in the record books. The final minutes belonged to Salavat Yulaev, with Markus Granlund and Alexander Kadeikin completing a big win to maintain a perfect start to the campaign for Tomi Lamsa’s men.

For the first time in 10 years, Yaroslavl’s Arena-2000 hosted hockey on September 7. A decade earlier, that date was brutally carved into the memory of sports fans all over the world when the plane carrying Lokomotiv to its first game of the 2011-2012 season crashed on take-off. Much has been written and discussed since that dreadful day and the memory of the 44 players, coaches, team staff and flight crew who lost their lives burns as brightly as ever today.

After a 10-year wait, Lokomotiv decided that it was time to play on the anniversary for the first time. Club president Yury Yakovlev explained that this was a chance to bring the team, the city and the wider sporting community together to pay their tributes on this most painful of days. The choice of opponent, meanwhile, was obvious: the ill-starred 2011 roster was flying to Belarus to start its season; Dinamo Minsk now came to Yaroslavl for this emotional encounter.

September 7 is always a solemn day in Yaroslavl and today was no exception. The club held its traditional memorial service in the city’s cathedral this morning, and further acts of remembrance took place at the monuments to the team in the main cemetery and at the crash site on the banks of the river Volga. Inside the arena, too, there was a somber atmosphere on a day that touched many across this hockey-mad city. 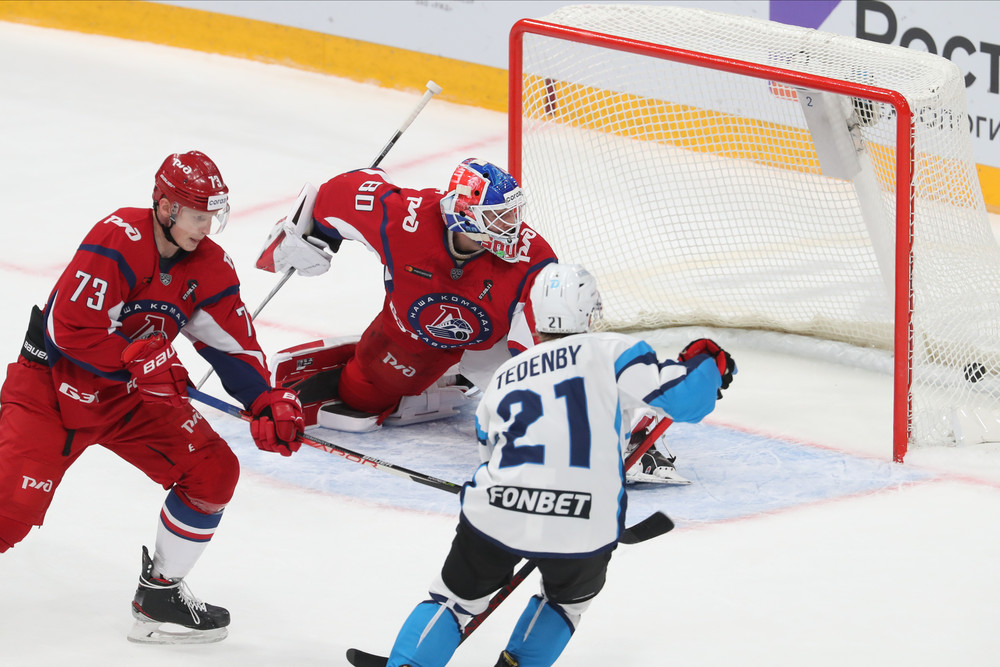 Amid all the emotion, it was perhaps not surprising that Lokomotiv’s players struggled to get into the game at first. Andrei Skabelka’s men found themselves down 0-2 at the first intermission, with goals from Taylor Beck and Ilya Shinkevich reflecting Dinamo’s first-period supremacy.

But Lokomotiv is nothing if not resilient. In the second period, the team fought back strongly. The pressure began when Andre Petersson’s interception in the Dinamo zone almost brought an opening goal for his team. Stretched, Minsk fluffed a line change, and the subsequent power play saw Reid Boucher set up Rushan Rafikov for a powerful shot from the left-hand channel. Soon after, another power play enabled the Railwaymen to draw level. Rafikov turned provider this time as Pavel Kraskovsky fired home Loko’s second of the night.

That was rich reward for a second session dominate by the home team, but early in the third Dinamo again moved ahead. This time, Kirill Voronin was first to a less puck in the Lokomotiv zone and beat Eddie Pasquale from close range. Lokomotiv redoubled its efforts in search of another tying goal. The Bison survived two penalties before, midway through the period, Maxim Shalunov made it 3-3. Petersson was the architect, and his pass across the face of the net set up Loko’s high-profile summer signing for his first goal since joining the club.

However, it was not enough to deny Dinamo. The visitor got on the power play in the 57th minute and Beck got his second of the game to make it 4-3 and send the points back to Belarus.

Harri Sateri made 37 saves and Trevor Murphy got a Gordie Howe hat-trick as Sibir picked up its first win of the season. Torpedo, blanked on home ice, has just one victory in three attempts this term.

Torpedo paid the price for failing to take advantage of a promising first period. In the opening frame, the home team enjoyed three power plays and outshot Sibir 15-7 but could not beat Sateri in the visitor’s net. And, almost inevitably, that profligacy was punished when the Siberians got a power play in the second and Murphy’s long shot set up Denis Golubev to make it 1-0.

Murphy’s first point for Sibir may have got him a little overexcited. His next contribution was a fight with Sergei Goncharuk which saw both players take major penalties. There was no further scoring, though, until deep into the third. Nick Shore, back in the KHL after two seasons away, potted his second since joining Sibir to make it 2-0. Then Murphy completed his evening’s work with an empty-net goal in the final second to seal the visitor’s first win of the season.