Teemu Hartikainen wasted no time on his return from suspension, scoring with his first shot to set Salavat Yulaev on the way to victory in Yekaterinburg. Dynamo Moscow head coach Alexei Kudashov celebrated 200 wins in the KHL; the former Lokomotiv and SKA chief saw his team beat Sibir 4-0. Metallurg won its second game of the season 2-1 at Barys, Ak Bars lost for the second time in two days, this time at home to Torpedo, and Dinamo Minsk enjoyed a 4-1 success at Severstal.

Barys went down to its second home loss of the season thanks to a late goal from Andrei Chibisov as Metallurg maintained its winning start to the campaign.

The home team rested young goalie Nikita Boyarkin after his KHL debut proved a chastening affair on Friday and Joni Ortio resumed his role as starter. However, there were just six defensemen on the roster. Ortio took part in a Finnish goaltending duel, with Juho Olkinuora coming into the Magnitka team in place of Vasily Koshechkin. Grigory Dronov returned after injury.

And Ortio was the key player in the first period, producing 11 saves to deny the visitor an early lead. After the home power play was frustrated twice early in the game, Metallurg assumed control with Denis Zernov again looking lively after his two-goal debut at Avtomobilist.

The picture was reversed in the middle frame, with Barys looking significantly sharper and Olkinuora having the busier time of it. Again, though, there was no scoring, even though Metallurg enjoyed a long 5-on-3 advantage midway through the session.

At the start of the third, the opening goal finally arrived. Jakob Lilja, who also scored a consolation goal in his team’s opening 1-5 loss, put Barys ahead with a goal scored seconds after the end of a home power play. However, Metallurg’s next PP brought an equalizer when Maxim Karpov got the decisive touch to a shot from Linus Hultstrom. For a time, the tempo dropped and overtime seemed likely. However, with 90 seconds left Magnitka got the winner when Mikhail Pashnin advanced with Chibisov for the latter to score.

Teemu Hartikainen missed the opening game of the season through suspension, but wasted no time in making an impression on his return. Restored to Ufa’s top line, he needed just 31 seconds to grab his first goal of the season, scoring with his first shot after his line-mates Markus Granlund and Sakari Manninen combined to set him up.

Salavat Yulaev extended that lead after six minutes when a swift transition from defense to offense enabled Alexander Kadeikin to score. Avtomobilist, meanwhile, was suffering from a nervous start to the game and struggled to execute its strategy in a disappointing first period for Bill Peters’ team.

The second period began rather better for the host, with the team playing better hockey and getting a reward when Alexei Makeyev halved the deficit. However, within a little over two minutes, Ufa scored twice more. Manninen restored the two-goal lead and Geoff Platt followed up his 200th KHL goal with his second in successive games. That was the end of Dmitry Shikin’s game in goal for Avtomobilist, with Vladimir Galkin taking over.

Galkin duly silenced the Ufa offense, but a 1-4 deficit was too much for Avtomobilist to overcome. True, Stephane Da Costa pulled one back, but the visiting defense was resolute in a goalless third period. Salavat Yulaev has two wins from two; the Motormen are yet to get into gear.

At first sight, this looked like a home win in the making. Severstal was impressive in its battling defeat to SKA in its opening game, while Dinamo suffered a dispiriting loss at Dynamo Moscow. However, both teams reversed the narrative in their second games of the season.

After taking a bit of a battering in Moscow, the Bison made a perfect start here with a goal after 27 seconds from Lukas Bengtsson. The lead was quickly extended when Denis Mosalyov made it 2-0; Canadian forward Tyler Graovac had assists on both goals to register his first KHL points following his summer switch from the Canucks organization.

Those two quick goals prompted the home team to switch goalies, with Minsk-born netminder Konstantin Shostak taking over from Dmitry Shugayev. Severstal then hit back midway through that opening session, with Graovac again playing a role. This time, though, the forward was in the sin bin and could only watch on as Danill Vovchenko’s power play goal reduced the deficit.

However, that was as good as it got for the Steelmen. Dinamo added a third goal when Ilya Usov struck midway through the second period, then Dmitry Buinitsky wrapped it up with an empty net effort.

Ak Bars suffered a second home loss in the space of 24 hours, going down to Torpedo the day after blowing a 3-0 lead against Kunlun Red Star. For the visitor, it was the first win of the season.

The home team shuffled its roster for this, its third game in four days. Kirill Krutov was surprisingly drafted into the first line ahead of Daniil Tarasov, Mikhail Glukhov and Nikita Dynyak featured on the fourth line and there was a first appearance of the season for defenseman Rinat Valiyev. Torpedo, beaten 3-6 at home to Vityaz in its first game, was content with cosmetic changes.

If Dmitry Kvartalnov was looking for a solid start to the game as his team looked to bounce back from Saturday’s shocker, he didn’t get it. Damir Zhafyarov, whose summer was spent in protracted contract negotiations before he signed a new deal at Torpedo, got his first of the season in the third minute, redirecting a point shot from Ziyat Paigin. That was all that separated the teams at the first intermission, although Nikolai Kovalenko saw a great chance stopped by Andrei Tikhomirov in the visiting net. 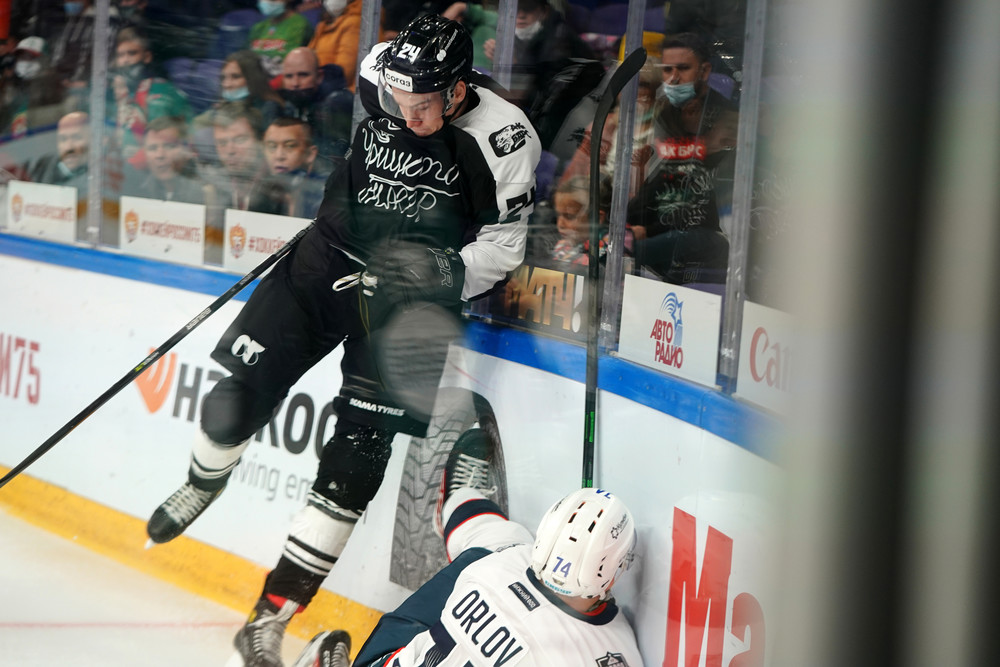 The middle stanza was goalless, but Torpedo extended its lead in the third when a double power play saw Kenny Agostino get his first goal of the season just 11 seconds into the power play. And the teams were not back to full strength before the visitor made it 3-0 thanks to Kirill Urakov.

In the previous game here, we saw a fight-back from 0-3. However, Kunlun Red Star had two whole periods to turn things around; Ak Bars had just 12 minutes. Dmitry Kagarlitsky pulled one back, but Torpedo was in no mood to relinquish its advantage and killed two penalties on the way to the win.

Dynamo’s solid start to the season continues with a second four-goal display bringing a second home victory of the campaign. After dispatching Dinamo Minsk in their first game under head coach Alexei Kudashov, the Blue-and-Whites downed Sibir 4-0. Vadim Shipachyov was among the goals once again.

Sibir arrived in Moscow after an overtime loss at Traktor, but never looked likely to take this one the full distance. Dynamo got on top from the start and when the home team enjoyed a 5-on-3 power play midway through the first period, Shipachyov opened the scoring. The same player extended the lead a couple of minutes later with the teams at equal strength, and Kudashov was already well on the way to his 200th career victory as head coach in the KHL. 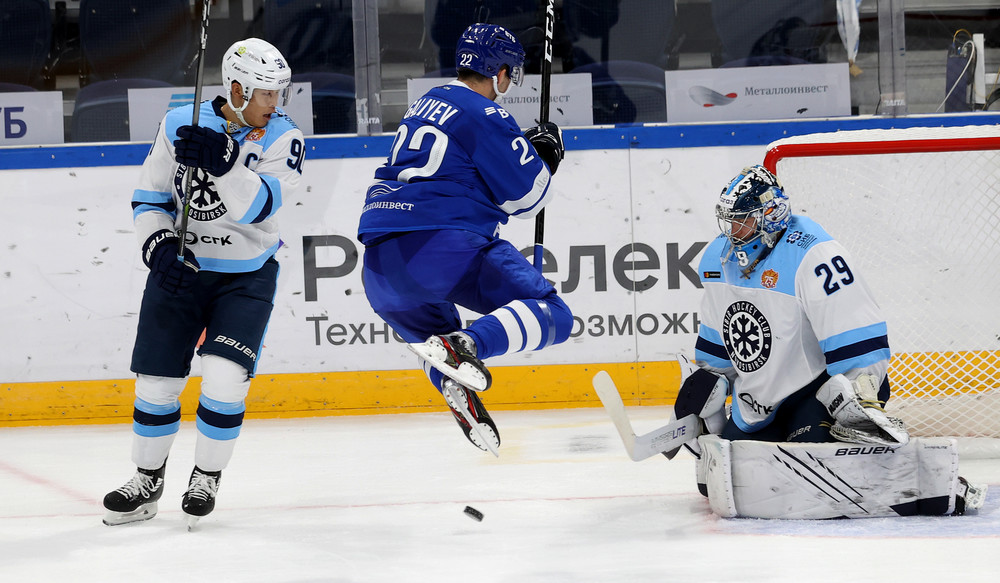 Midway through the second period, Sibir got a chance to hit back when Shipachyov took a penalty, but the home PK was on top of the situation. Instead, late in the frame, it was the Dynamo power play that struck again, with young Dmitry Rashevsky getting his first KHL goal in only his 14th appearance at this level. Late in the game, Nikolai Chebykin added a fourth; like Rashevsky, he’s been called up from the VHL and this was the 24-year-old’s second KHL goal and his first since scoring on his debut against Lada on Jan. 14, 2017.