Three for Kulemin, two for Shipachyov ... 200 for Platt. September 3

Day three of the KHL season brought the eight remaining teams to the ice — and it was a big day for forwards. Salavat Yulaev’s 5-1 win in Kazakhstan saw Nikolai Kulemin score a debut hat-trick while Geoff Platt celebrated his 200th goal in the KHL. Vadim Shipachyov continued where he left off last season, scoring twice for Dynamo Moscow, while Denis Zernov did the same on his Metallurg debut. Traktor was the first team to win in overtime this term, clawing back from 0-2 to beat Sibir.

Nikita Boyarkin was a star for Kazakhstan at the last World Championship, but the 22-year-old goalie had a tough time on his KHL debut. Salavat Yulaev began its season with a bang, shrugging off the absence of suspended talisman Teemu Hartikainen to power to victory. Nikolai Kulemin plundered a hat-trick, and Geoff Platt potted his 200th KHL goal.

Platt was promoted to the top line today in Hartikainen’s absence while new defenseman Dinar Khafizullin joined Philip Larsen on the first pair. Two more new faces, Kulemin and Sergei Shmelyov, went to the second line and Tomi Lamsa gave a clutch of young players a spot on the lower lines. Barys, meanwhile, is still waiting for its latest signings, Joe Morrow and Jacob Berglund, to join the team but had summer additions Christian Thomas and Cody Kunyk on the top line. Boyarkin, somewhat surprisingly, got the nod over Joni Ortio to start his first ever game at this level.

Unfortunately for the youngster, he was beaten inside the first 10 minutes of his debut. Kulemin, who moved to Ufa from Metallurg this summer, showed that he is not merely ‘good in the locker room’ when he skated on to a feed from Alexander Kadeikin to open the scoring.

Barys had cause to feel hard done by. The visitor spent rather too much time in the box and the host dominated proceedings but was unable to put the puck in the net as Juha Metsola made a strong start to his season. When a power play goal did arrive, it came at the opposite end as Kulemin potted his second of the game. Right before the second intermission, Platt got an effective redirect to make it 3-0 and claim his 200th goal in the league.

The home team was backed by 3,250 fans — a third of the arena capacity, as permitted under current regulations. It was the first time spectators had seen regular-season action here since Feb. 2020, and it wasn’t until the 46th minute that they had a goal to cheer. Jakob Lilja was the scorer, reducing the arrears on the power play. But it couldn’t change the outcome. Shmelyov got his first for his new club since a summer move from Sochi and late in the game Kulemin sealed a sparkling debut with his third of the night.

Both clubs came into this game without a legendary figure. For Metallurg, it was the start of the post-Mozyakin era after Russia’s record-breaking scorer announced his retirement from the game over the summer. For Avtomobilist, things are less clear cut: Pavel Datsyuk continues to follow his own training program and has yet to confirm whether or not he will play this season.

In the Magic Man’s absence, Avto head coach Bill Peters conjured up a surprise or two of his own. Forward Brooks Macek was unexpectedly moved to the third line as a new-look trio of Shane Prince, Ryan Spooner and Stephane Da Costa combined on the first.

However, the home team’s new acquisitions were outclassed by Denis Zernov. The former Avangard center was a weekend trade for Ilya Vorobyov’s team; today he marked his debut with two goals. They came either side of the second intermission, consolidating Magnitka’s early grip on proceedings. The visitor made a fast start, with two goals in the first seven minutes as Anatoly Nikontsev and Andrei Chibisov found the net. Midway through the second, two more new faces combined for Metallurg with Brendan Leipsic setting up Phillippe Maillet for number three. Then came Zernov’s first of the game, opening a commanding lead.

The Motormen tried to get back into it. Valery Sitnikov got the host on the scoreboard, then Georgy Belousov wasted a great chance from a penalty shot. Ill-discipline continued to hamper Metallurg and a 5-on-3 power play enabled Macek to reduce the deficit before the break. However, Zernov got his second of the game on yet another PP at the start of the third and Linus Hultstrom wrapped it up in the last minute with Leipsic getting his second helper of the game.

Sibir made a blistering start to this game, but a widely-fancied Traktor roster hit back to win in the first overtime session of the season.

The visitor seemed to be in trouble at the start when Denis Bodrov took a penalty after just 35 seconds, but a short-handed goal from Nikita Korotkov gave Sibir the early lead. After nine minutes play, Nick Shore doubled that advantage, collecting a pass from the corner, skating into the center and shooting past Roman Will.

However, Traktor hit back at once when Tomas Hyka set up Nikita Tertyshny for his first goal in the KHL. The 23-year-old impressed in the summer and is looking to establish himself on the roster for Traktor after working his way through the ranks at the club. 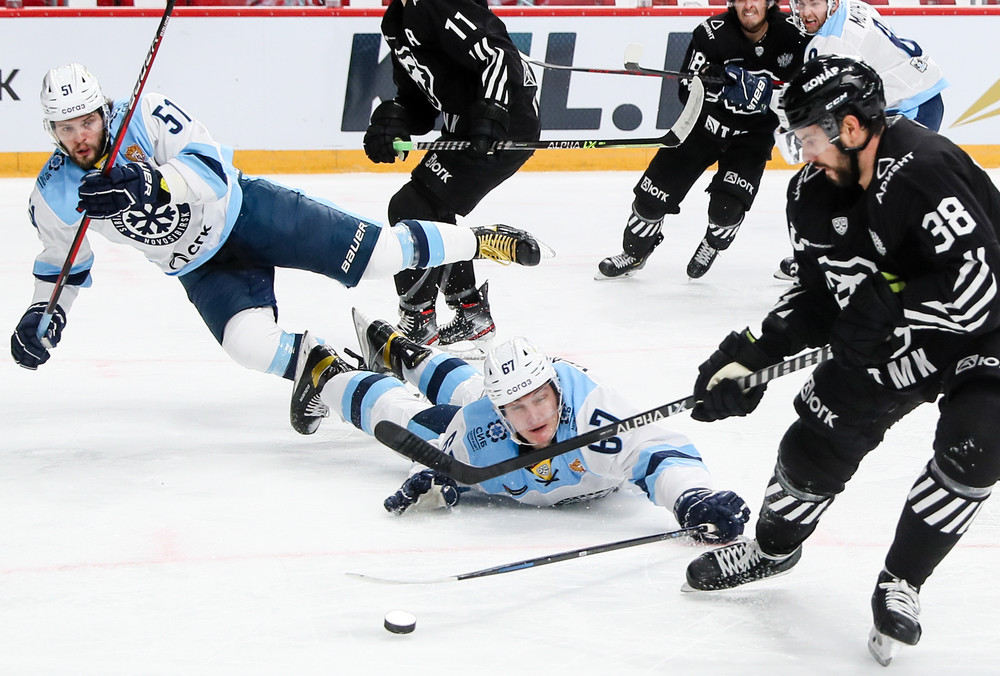 That early rush of goals did not continue, however. A lively second period saw both goalies on top and no further scoring. Then the third period began in cautious vein, with Sibir happy to hold onto its lead. However, a double minor on Timur Akhiyarov for high sticks gave Traktor the edge it needed: with three minutes to play, Albert Yarullin grabbed a debut goal to bring the home crowd to its feet.

In overtime, Traktor was rampant, but Harri Sateri performed heroics in the Sibir goal. Twice, the Finn snuffed out one-on-one breaks, but he was unable to deny Nick Bailen a game-winner in the final seconds of the extras.

The Belarusians might have arrived in Moscow with something of an Olympic qualification hangover after missing out in Bratislava on Sunday. Certainly, Craig Woodcroft’s switch from country back to club got off to the worst possible start. Just 35 seconds into the game, Oscar Lindberg put Dynamo Moscow in front.

Things went from bad to worse: an interference call on Mario Kempe was compounded by a team delaying the game penalty, and the 5-on-3 power play saw Vadim Shipachyov double Moscow’s lead. Midway through the frame, yet another Minsk penalty was punished by Stanislav Galiyev as the home team took complete control of the game. 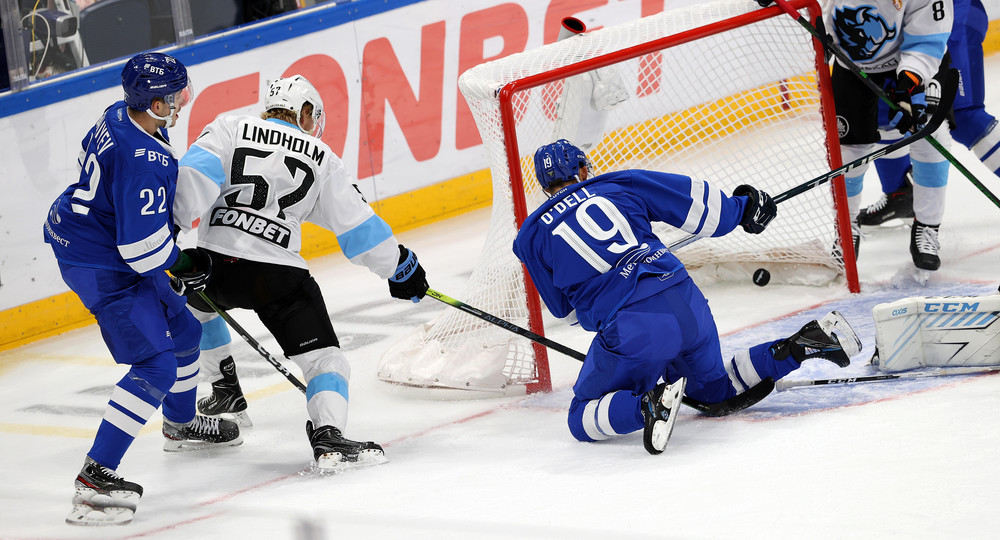 Limited to just four shots in the opening stanza, Minsk was happy to reach the intermission without sustaining further damage, but the second period began with Shipachyov potting his second of the night. At last, though, the visitor began to make its presence felt; Denis Mosalyov, who once played for Dynamo Moscow, pulled one goal back and the second period was closely contested.

However, there would be no dramatics in the third. The home team showed effective game management to take the sting out of the action and the visitor was well beaten. There was no further scoring as Dynamo began with a convincing win — and Shipachyov picked up yet another player of the game award.