Dinamo Minsk travel to Sochi in a heated battle on Sunday!

Russia missed out on World Championship glory, but there was plenty of KHL interest in the medal games in Riga — from Finnish goalscorers to KHL officials. Elsewhere, the 2021 contenders for coach of the year were nominated, Russia’s sledge hockey stars enjoyed success in Sochi and the top players of the Women’s Hockey League learned where they will play their World Championship this summer.

The 2021 World Championship final saw Canada edge Finland in overtime. The gold-medal roster included Justin Danforth, who played last season at Vityaz and, as well as earning a place on his national team, also secured a contract with Columbus in the NHL. The Finns, meanwhile, had more KHL involvement. Jokerit forwards Saku Maenalanen and Iiro Pakarinen were among the team’s leading scorers, while newly-signed defenseman Petteri Lindbohm scored his first of the tournament in that gold medal game. Another new face at the Hartwall Arena, Hannes Bjorninen, potted a couple of goals for the Finns — including the semi-final winner against Germany — while the popular Marko Anttila again captained the team.

Finland, coached by Jukka Jalonen, relied heavily on its D-core in Riga, and again there were many KHLers involved. Avangard pair Ville Pokka and Oliwer Kaski were both selected after their Gagarin Cup success, while Atte Ohtamaa played a big role on the blue line.

Canada on top of the world

Metallurg’s Finnish goaltender Juho Olkinuora was voted top netminder at the 2021 World Championship. The 30-year-old, who backstopped Finland to silver, was selected in a poll of accredited journalists at the tournament. Olkinuora played in seven games, collecting five wins and allowing just 10 goals for a GAA of 1.39 and a 94.25% save ratio. German defenseman Korbinian Holzer, who played last season with Avtomobilist, was also part of the six-strong All-Star team alongside his compatriot Moritz Seider. Tournament MVP Andrew Mangiapane of Canada led the forward line, joined by team USA’s Conor Garland and Great Britain’s Liam Kirk.

Russia was not competing in the gold medal game in Riga, but was still represented in the final. The four officials were all selected from the KHL, with Czech ref Martin Frano working alongside his Russian counterparts Evgeny Romasko, Gleb Lazarev and Nikita Shalagin during Canada’s 3-2 win.

Tomorrow is the KHL’s closing ceremony, and three more nominees have been announced. The candidates for coach of the year are the two Gagarin Cup finalists — Bob Hartley, who led Avangard to the title, and Igor Nikitin, whose CSKA topped the regular season table — plus Andrei Razin, who is building a promising young team at Severstal. The coach of the year award, and all the other individual prizes from the 2020-2021 campaign, will be presented on June 8.

Coach of the Year: Razin, Hartley and Nikitin nominated 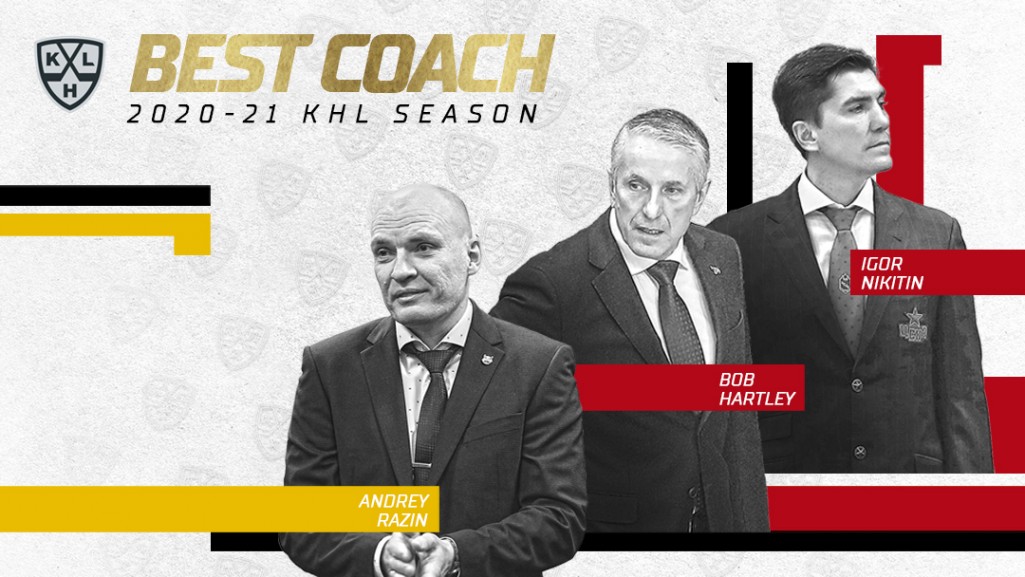 Russia ‘A’ took the honors in the four-team sledge hockey tournament played in Sochi last week. The competition, set up to help teams prepare for the upcoming Paralympics in Beijing, saw two Russian teams face Slovakia and Kazakhstan. The Russians came top of the group and met in the gold medal game, with Russia ‘A’ beating its rival 2-1 thanks to goals from Nikolai Terentiev and Airat Hamzin. Vladimir Rychkov scored for Russia ‘B’. In the bronze medal game, Slovakia defeated Kazakhstan 11-0. Individual prizes went to Terentiev (best forward), Slovak defenseman Slavomir Ferencik and Russia ‘B’ goalie Vladimir Kamantsev. The tournament was organized with the support of the KHL.

Women to play in Canada

The postponed IIHF Women’s World Championship, due to take place in Nova Scotia in April, has been rearranged for Calgary in August. The event will now run Aug. 20-31, serving as a curtain raiser for the 2021-2022 season. In addition, the IIHF is considering a proposal to play a Women’s World Championship in Olympic years, starting in 2022. If approved, the championship would take place in the August of future Olympic years.