Man of the Week — Nick Bailen

KHL.ru’s weekly column goes on with the American-born, Belarusian defenseman, who was recently awarded Best Defenseman of the month after his strong play in February.

With the KHL playoffs coming up for Traktor, the defenseman’s role within the team just increased. The 2020-2021 campaign was the second-best for Nick Bailen in terms of points, producing 35 (13+22) points for the Chelyabinsk franchise — only two shy of his career-high 37 scored in his first season in the league. Once again, the American-born defenseman logged more than twenty minutes a night, trailing only Lawrence Pilut among all Traktor defensemen. His 13 goals from the blue line were not a record for the Chelyabinsk franchise — Deron Quint and Alexander Ryazantsev scored more — but it was good for a solid third place in the all-time scoring charts. Moreover, he only needs a single point to become the most-productive D-man for Traktor in the KHL’s history as he has 114 points against Quint’s 115. If these numbers don’t speak enough for Bailen’s meaning to Traktor, he also earned 13 powerplays for the Chelyabinsk side, once again trailing only Pilut among blueliners. In February, Traktor had a strong showing to get in the best shape before the playoffs, and Bailen was no exception, scoring seven goals and eleven points for well-deserved Best defenseman honors. Interestingly enough, the D-man recently potted a double against his former team, Dinamo Minsk, which won the game 3-2 OT.

Nick Bailen was born in Fredonia, New York, on the southern shore of Lake Erie, from a very active family where every member is fond of sports. His older brother Eric also played hockey at the college level but didn’t end up as a pro. Bailen first played in the USHL, then in the NCAA with Bowling Green and RPI — with another stint in the USHL as changing teams at the college requires a one-year hiatus. However, despite his excellent numbers and being an All-American, he didn’t make it to the big league.

“Unfortunately, RPI wasn’t very high in the rankings,” Bailen explained in a 2017 interview. “There were 11 players selected [in the All-Star squad], and ten of them play in the NHL. Everyone but me. Maybe I’m too small for the NHL. But you know, everything happens for a reason. In my very last game for RPI, I suffered a groin injury. I couldn’t play in the AHL as I missed more than two months. And when I started playing again, it wasn’t the best decision. I suffered another injury and played at about 70% of my potential. It’s too bad that I couldn’t take advantage of my chance. If I started playing in the AHL right away, maybe I would have had a chance [in the NHL].”

After playing a handful of games in the AHL with the Rochester Americans, Bailen signed a one-year deal with the Liiga side Tappara Tampere. His tenure with the team was incredibly productive, and he helped Tappara reaching the Liiga finals. After his adventure in Finland, Bailen greed on a deal with Dinamo Minsk of the KHL. Following his strong play, he was offered to represent Belarus on the international stage, which he quickly accepted. However, he had to renounce his first showing with the Belarusian jersey in 2016 due to an injury picked up in the latest games of the season; he got his first caps one year later, then he finished the 2016-2017 campaign with SHL side Vaxjo. After leaving Minsk, Bailen moved East and signed with Traktor. Differently from many other imports, Bailen actually learned Russian, and this has helped immensely his adaptation.

“I always have Russian guys around me in the locker room,” Nick Bailen said in 2017. “Next to me [was] our team captain, Alexander Shinin. He decided that he needs to teach me one or two words in Russian every day. And he wants me to repeat them twenty times. This helps me a lot. I understand a lot more, but talking is tough. But all the guys try hard to understand me.”

In 2018, Bailen helped Traktor reaching the Eastern Conference finals, where they lost 0-4 to the eventual champions, Ak Bars Kazan. This year, Traktor will have a tremendous chance to repeat the feat, but they have to get past Salavat Yulaev first. 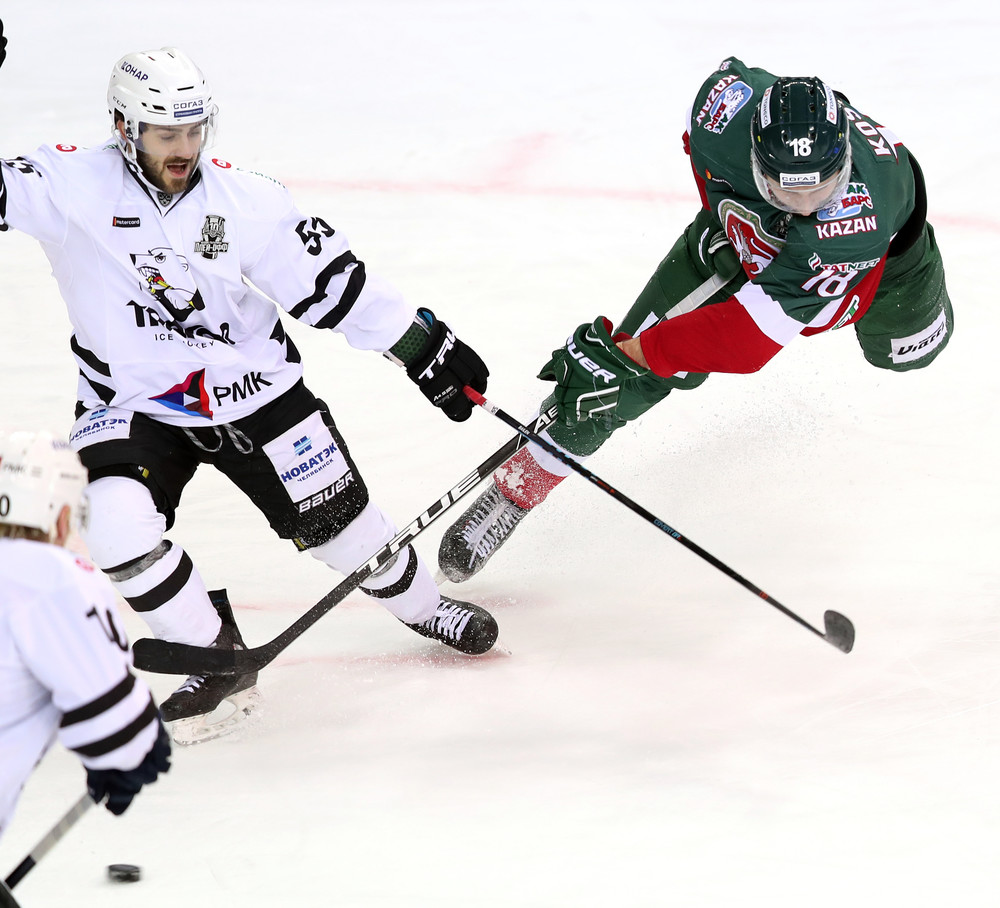