Avtomobilist has a long connection with automobiles — so it’s fitting that the Yekaterinburg club set up a drive-in show for fans unable to attend the arena in person due to the current restrictions. Meanwhile, Vityaz captain Alexander Semin reflects on playing behind closed doors in Podolsk and Sakari Manninen lifts the lid on the secrets of his productive partnership in Ufa.

With crowd numbers restricted at the moment due to the coronavirus pandemic, clubs are thinking of new ways to keep in contact with their fans. In Yekaterinburg, Avtomobilist found a safe alternative for supporters to get together and watch games — in their vehicles. The club invited 100 motorists to book a place in the arena car park and began screening games on a giant media screen, while commentary was available over the stereo system in each vehicle. With up to five people in each car, it’s a way of bringing at least a few more people into the gameday experience. Fans responded by snapping up the available slots and decking out their transport in Avto’s Red-and-White colors and even emerging from their motors to sing the anthem together before the game.

In Podolsk, meanwhile, Vityaz continues its home program with no fans in the arena, following the requirements of the Moscow Region authorities. For club captain Alexander Semin, it’s a situation he’s never encountered before in his long career — and far from ideal for him and his team-mates. “Obviously, nobody likes playing without fans,” he told KHL.ru. “We miss their support. After all, hockey players do it for the supporters. When they are not there, it can start to feel like a practice session. We know that lots of people are watching us online, but we like to hear the noise in the arena, the atmosphere. Playing in silence is a bit different from what we’re used to, but it’s OK.” Despite the odd experience, and the fact that teams in different regions play under different restrictions, Semin is philosophical about the situation. “We have to do what the authorities ask,” he said. “We know that a lot of people are getting sick so we are doing everything we can to keep people healthy. Our job is to go out and play hockey; the authorities’ job is to make the right decisions.” 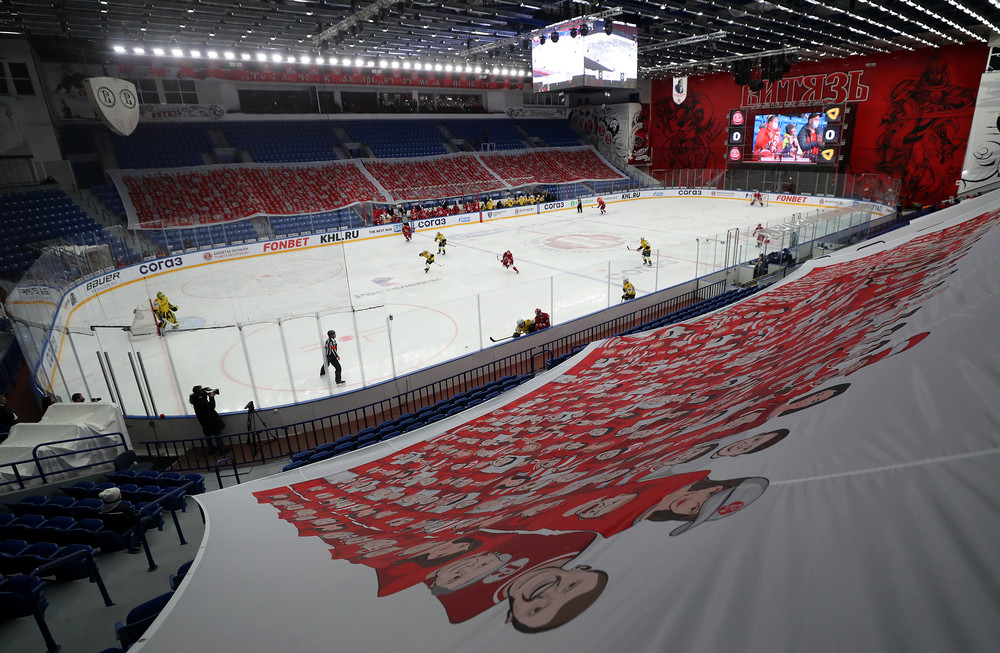 Salavat Yulaev’s form has been inconsistent this season, with the Ufa team hit by COVID and forced to shuffle its roster. But when its top line is fully fit, Tommi Lamsa’s team has really scoring power. Sakari Manninen told KHL.ru a little about his partnership with Markus Granlund and Teemu Hartikainen, which is currently good for 75 points this season. “I don’t know what’s the key to our success,” he said in an exclusive interview. “All I can say is that I have fantastic linemates and I enjoy playing with them. Granlund perfectly complements Hartikainen and me. Markus and I aren’t big, but we are fast, and Teemu adds intensity to our line with his power and creativity. I think after Linus [Omark] left the team we started playing faster and this probably helps Teemu. And we also have great chemistry. Markus is a fantastic player; he can play any kind of hockey. He’s also a great gut and we spend a lot of time together.”

Sakari Manninen: “If we work hard, we have a good shot at the Cup”

Avangard continues to play its home game in exile in Balashikha, but the club’s new home is making good progress. The groundwork on the planned arena got underway back in June and September saw the start of construction work on the surface of the site near the Irtysh river. Last week saw the completion of the foundations for the playing surface and, with Avangard on a road trip to the Far East, the club’s directors called in at home to monitor progress and bury a time capsule in the site.

Well, sort of. Yuri Kolokolnikov is famed for his role as Styr in Game of Thrones and, more recently, he played Gennadi Bystrov in The Americans. Now the 39-year-old is back in his native Moscow, filming a hockey-based drama, ‘Hook’, with Dynamo featuring throughout the script. Kolokolnikov’s character is a former Blue-and-White forced to hang up his skates due to injury and looking to carve out a new career as an agent. Filming is already underway at the VTB Arena and the Dynamo training center in Novogorsk.

Our Chinese franchise, Kunlun Red Star, is all about promoting hockey to fans from China — wherever they are. And that includes the like of Gene Ho, a Dragons devotee living in Finland. For Gene, not surprisingly, Red Star’s games at Jokerit are a real highlight, so he was more disappointed than most when last week’s fixture was cancelled at the 11th hour due to a COVID scare. In response, the team put together a video greeting for its Finnish fan.

Danis Zaripov, Ak Bars captain, got his first goal since returning from injury, but it was his son Artur who captured the imagination during the week. The 17-year-old made his first appearances for Irbis, the Ak Bars Junior team, featuring in three JHL games.