The 20th anniversary edition of the Republic of Bashkortostan Cup got underway on Monday with wins for Neftekhimik and Traktor in Ufa. Meanwhile, in Magnitogorsk, host club Metallurg made a slow start in the Romazan Memorial Trophy.

Severstal’s first pre-season game of the summer brought a debut goal for new signing Jindrich Abdul — but the star of last season’s Slovak championship finished on the losing side.

Abdul’s 62 points with Slovan Bratislava made him the top scorer in Slovakia last season and that kind of form persuaded Severstal to invest in the 24-year-old Czech winger. The Steelmen saw a first return on that investment midway through the second period of this game, when Abdul converted a power play chance to tie the game at 1-1 and record his first goal as a KHL player.

However, he wasn’t the only goalscorer to register a ‘first’ in that middle stanza. Experienced Belarusian international Andrei Kostitsyn opened the scoring with his first goal since joining Neftekhimik, and 23-year-old forward Mikhail Byakin — son of Olympic champion Ilya — potted his first as a KHL player to restore Neftekhimik’s advantage.

Kostitsyn was happy with his work-out. “I felt OK today, but of course there are still some after-effects from our fitness camp,” the forward said. “In these games, we just need to get used to playing together, put our lines together and get ready for the season. Severstal skated really well, they have a lot of young guys who give them a good speed. There were times when we didn’t play the hockey we wanted, and that led to mistakes that gave the opposition some chances.”

Severstal tied it up again in the 48th minute through Yegor Yakovlev, a second power play goal for the Cherepovets team, with an assist from another summer signing, defenseman Veli-Matti Vitasmaki. But it was to little avail. Neftekhimik won it thanks to a late double from Bulat Shafigullin.

Despite the defeat, Severstal forward Daniil Vovchenko wasn’t too disappointed with his first action since February.

“It’s our first game of the summer,” he said. “We didn’t have everything work out for us, but there were some promising moments. I don’t think we looked too bad, considering it was our first game. Even though we lost, we did what the coaches asked and we worked hard.

“I think everyone has missed playing hockey. There was a lot of emotion out on the ice and we started running around all over the place before we calmed down a little bit.” 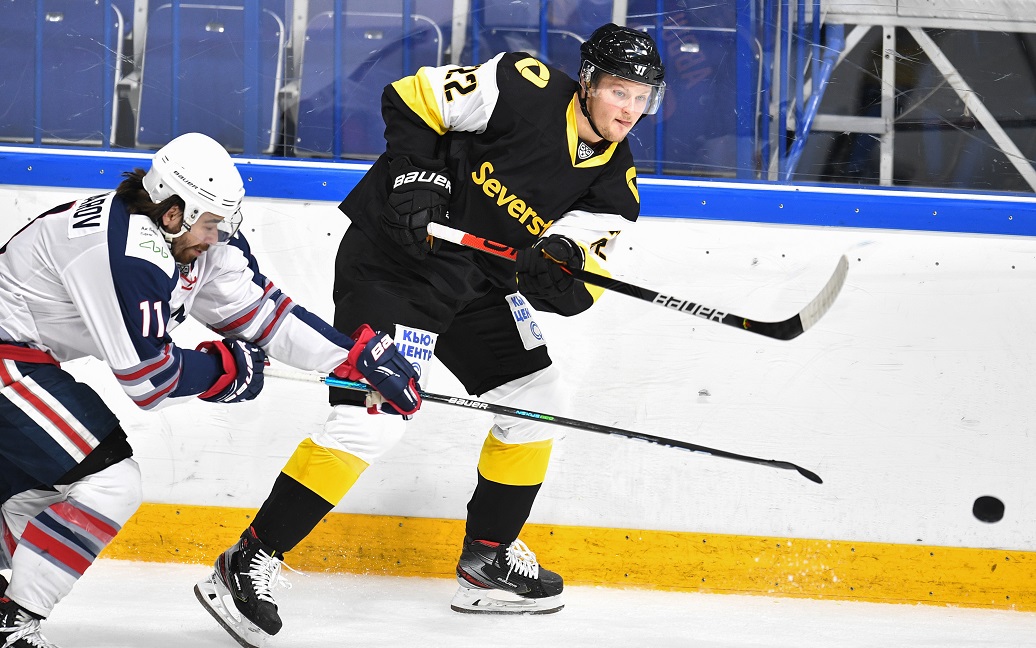 There was a big boost for all hockey lovers ahead of this game. Previously, the attendance was limited to 10% of the capacity at Arena Ufa but, on the morning of the game, it was announced that the quota had increased to 25%. That meant that around 2,000 spectators had the chance to attend a topsy-turvy game.

Salavat Yulaev named a strong roster to start its home tournament, with only defenseman Pavel Koledov absent as he recovers from injury. But if the focus was on the new first line of Nikita Soshnikov, Teemu Hartikainen and Markus Granlund, it was Pyotr Khokhryakov who stole the show with two first period goals.

Traktor, too, had a line-up boasting several newcomers. One of them, Sergei Kalinin, pulled a goal back early in the second period. That was his first since joining from CSKA. Initially, it seemed that the path of the game was not much changed; Ufa restored a two-goal lead thanks to Sakari Manninen.

But another Traktor newbie, Jacob Berglund, pulled one back and late in the frame, Ilya Karpukhin tied the scores at 3-3.

“I think we played well in the first 20 minutes today, I was happy with that,” said head coach Tomi Lamsa after his first tournament game with Salavat Yulaev. “But then we started making stupid mistakes. Everyone went charging forward, wanting to score more goals and instead we conceded.”

There was no further scoring in regulation time, but Traktor’s Czech combination delivered the knock-out blow in the extras with Lukas Sedlak scoring off a Tomas Hyka assist. Earlier in the game, the two Czechs had lined up with former NHLer Pontus Aberg, while there were also appearances from new goalie Roman Will and Swedish defenseman Lawrence Pilut.

“Today’s game wasn’t easy, especially the first period,” said Traktor head coach Anvar Gatiyatulin. “But this is summer hockey. There were many things we wanted to see in our game and today we saw them. But there is a still a lot of hard work ahead.

“Our guys missed playing hockey. Practice just isn’t the same. That might be why we had so many penalties. But I liked our desire, our commitment to the game.”

Avtomobilist had its first taste of tournament play under new head coach Bill Peters and picked up a notable win against Ilya Vorobyov’s Metallurg. The Motormen showed signs of building on two earlier warm-up games against Salavat Yulaev, while Magnitka took time to settle in its first action of the summer.

“We had time to practice, to work on our lines,” Peters said. “We have a great group of players here and it’s fun to coach them. We’re still in the process of bringing the players and coaching staff together, but it’s a work in progress and we’re already seeing results.”

There was no shortage of incident from the first minutes. The home team took two penalties early on, but the Metallurg PK stood firm. However, in the 15th minute Avtomobilist did get in front when summer signing Zakhar Arzamastsev fired home the opening goal. Anatoly Golyshev doubled that lead in the second period, tapping home the rebound from an Andrei Obidin shot and the visitor outshot Magnitka 13-2 in the middle frame. And all that despite missing three imports. Dan Sexton and Chay Genoway are yet to join up with the squad, Brooks Macek is back in Yekaterinburg recovering from a minor injury.

By the second intermission, it seemed that the visitor was well on top of the game, but Metallurg responded in the third. Sergei Mozyakin, playing on a newly-forged line alongside summer signings Nikolai Prokhorkin and Sergei Plotnikov, pulled a goal back on the power play. With the game in the balance, it took an empty-net goal from Nikita Tryamkin to restore a two-goal cushion for Avto — and the visitor needed that to secure the win after Igor Shvyryov grabbed a last-gasp consolation for Metallurg.

Metallurg head coach Vorobyov was happy with two third of his team’s effort. “The first and third periods were plus points,” he said after the game. “But in the second, we lost out shift by shift. They out-thought us and showed us where we need to work. We were pinned down a few times, we couldn’t get the puck out.”