Lokomotiv and Sochi U20s both recovered some pride at the Sochi Hockey Open ahead of tomorrow’s pair of cup finals. The Railwaymen won 6-2 against SKA, recording a first victory of the summer. And Sochi, despite another loss, at least had the satisfaction of scoring on Russia’s juniors after two lopsided losses.

Danilin puts Sochi on the scoreboard

This has been a steep learning curve for Sochi’s youngsters. Pitched into the Sochi Hockey Open at short notice, the kids faced a Russia Junior team with the skills to overpower. Heavy losses — 0-6, then 0-10 — told the story. And for two periods, this game promised more of the same as Igor Larionov’s national team jumped to a 4-0 lead. But then, at last, Sochi, proved a point of its own.

The third period brought the team’s first two goals in the competition. Pavel Danilin potted both of them, finally ending the goal drought in the last 10 minutes of the game. It was a belated reward for a Sochi team that kept battling against huge odds throughout, and while it could not change the outcome of the game, it at least gives the kids a morale boost ahead of Saturday’s ‘Future Cup’ game against Russia’s juniors.

“We played much better than in the previous games,” Danilin said after the game. “We had a special attitude, and everyone did his best. I don’t feel like a hero, though — what good are my goals if the team loses? It’s just nice to score.”

Due to the difficulties Sochi’s juniors face in competing at the tournament, the organizers have changed the planned schedule. Instead of Russia U20 going for gold against SKA, winner of a three-game series against Lokomotiv, Igor Larionov’s team will put its unbeaten record to the test against Sochi with the ‘Future Cup’ at stake. Once again, here, it looked like men against boys at times. An early goal — Vladislav Firstov after 70 seconds — set us up for another comfortable victory. Yet Sochi dug in, and limited Russia to just one tally in the first period. The middle frame saw Vasily Ponomaryov, Mikhail Abramov and Yaroslav Likhachyov extend that lead as another rout seemed inevitable. But Sochi kept fighting — literally as well as figuratively, at times — and got its reward late in the game.

“Compared with the previous two games, this one turned out more interesting,” said national team coach Vladimir Filatov. “Our guys wanted to get another big win, but Sochi was much better drilled on defense. Their goalie played great as well. The guys on the opposition didn’t spare themselves, they played hard and gave us a good game.” 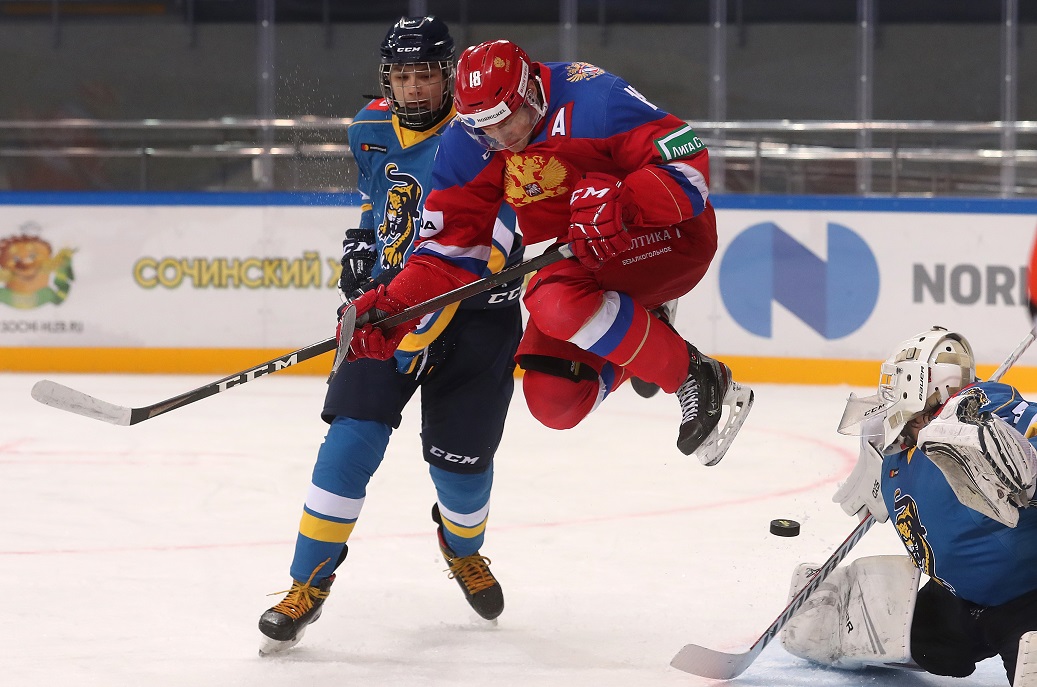 Lokomotiv produced a convincing win of its own in this game to add some spice before these teams meet tomorrow to determine the Sochi Hockey Open champion. And the Railwaymen will go into that game — the fourth meeting between the teams this week — on a high after bouncing back from two big losses to secure its first win of the summer.

It started well enough for SKA. Andrei Kuzmenko added to the two goals he scored in yesterday’s 6-2 success with the opener here in the eighth minute. He converted a Joonas Kemppainen feed as the Army Men marched through the Loko defense with ease.

Subsequently, though, Lokomotiv found its game. The Railwaymen tied it up on the power play midway through the first, Ivan Kovalyov redirecting an Alexei Marchenko shot into the net. Then, in the middle frame, four unanswered goals put a smile on Yaroslavl faces for the first time in this tournament. Midway through the session, Anton Lander capitalized on a defensive error as SKA failed to clear its lines; two minutes later Artur Kayumov streaked away to beat Alexander Samonov in a one-on-one. Georgy Ivanov converted a penalty shot to make it 4-1 before Lander potted his second of the game off a Yegor Averin feed.

After the game, some suggested that Averin could play a ‘water-carrier’ role alongside Lander and his fellow Swede, Andre Petersson. Head coach Andrei Skabelka admitted that the Russian forward got through plenty of hard work during the game, but would not be drawn on his preferred partnerships at this stage.

“You can see how we are changing our lines in every game,” he said. “The search is underway and I hope we will have settled combinations by the start of the season. In general, the things we want to see from the team are getting better in each game. The team looks more coherent.”

In the third period, the teams traded two more goals as the final score was a mirror image of yesterday’s. Anton Burdasov emulated Kuzmenko by adding a goal to his double on Thursday, while Pavel Kraskovsky scored Loko’s sixth of the day.

SKA’s coach Andrei Kozyrev promised a better performance on Saturday. “In brief, we made too many mistakes, which led to a disappointing result,” he said. “It was a bit of everything. The guys relaxed after two big wins, and we did too many things that made it easier for Lokomotiv. We’ll work on it and you’ll see a very different team tomorrow.” 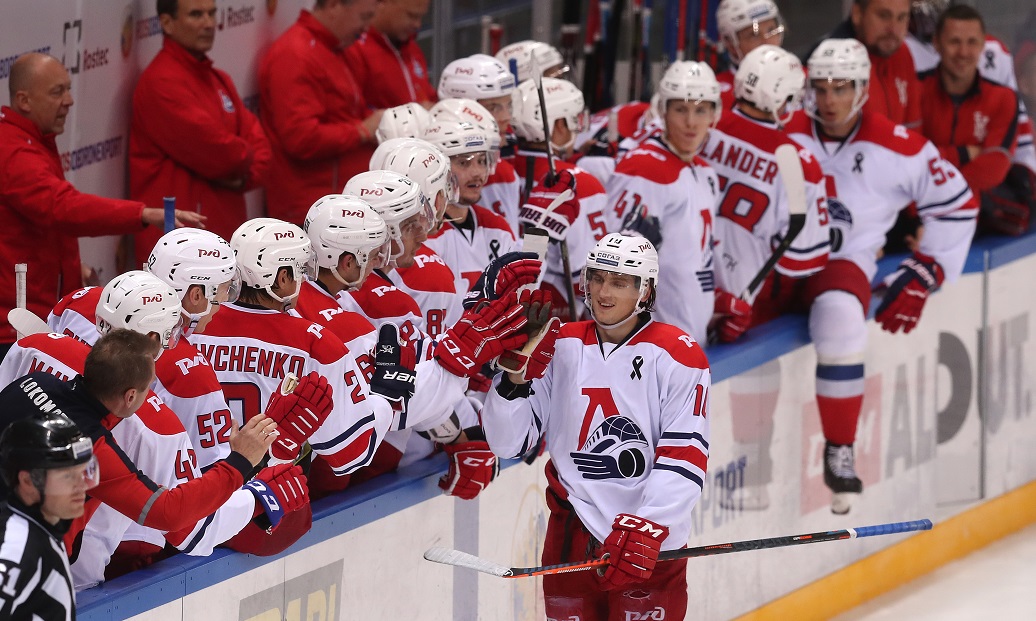 Amur has played four games this pre-season, and this result made it three wins and one shoot-out loss. It’s an encouraging reaction from a team which lost its head coach unexpectedly just as the summer action was getting underway.

Vityaz, meanwhile, is finding things a bit harder. The club’s only previous action brought a 0-1 loss against VHL outfit Sokol Krasnoyarsk. For today’s game, Svyatoslav Grebenshchikov led the top line alongside newcomers Alexander Dergachyov (ex SKA) and Kaspars Daugavins (from Spartak). A further strike trio comprised players on a try-out, while the fourth line had a youthful look.

It was a combination of youngsters and hopefuls that got Vityaz its goal here, late in the first period. Vitaly Popov, who played last season at Avtomobilist, found the net after young Zakhar Bardakov forced a turnover in center ice. That cancelled out an opener from Amur’s Stanislav Katsuba, but the visitors’ greater experience told. Vladimir Butuzov restored the lead in the middle frame and it remained 2-1 until the end.

A week after the second of its warm-up games against Ak Bars, Neftekhimik headed to Almetyevsk for another practice game against a near neighbor. This time, the opposition came from the VHL — and Nefteyanik sprang a surprise for its higher-ranked opponent.

Vyacheslav Butsayev took the opportunity to assess some of the younger players in the club’s system, rest his imports to have a look at the depth on his roster. The top line comprised Bulat Shafigullin, Alexander Kucheryavenko and Marat Khairullin, an unfamiliar look for the team’s strike force.

The visitor got off to a bad start, falling 0-2 down inside seven minutes. Neftekhimik rallied, reducing the deficit thanks to Andrei Chibilyov. The last minute of the frame brought two more goals, with Neftyanik making it 3-1 before 18-year-old prospect Mikhail Byakin responded 18 seconds later. That proved to be the end of the scoring and Neftekhimik went down to a second successive summer loss.