For the second time in three days, SKA scored six on Lokomotiv at the Sochi Hockey Open. Valery Bragin’s team will now face his former charges, Russia U20, in the gold-medal at this tournament. The other game of the day saw Amur defeat Sokol in an exhibition event in Moscow.

For the second game in a row, SKA scored six on Lokomotiv at the Sochi Hockey Open. This time, however, the Army Men at least had to face a challenge, coming from behind before overpowering the opposition in the second period.

The teams made a handful of changes from the opening game; Andrei Skabelka caught the eye with his decision to give 20-year-old goalie Vladislav Okoryak a debut. The youngster was beaten after just 80 seconds, with Andrei Kuzmenko putting SKA ahead.

However, this was not the cue to open the floodgates. Instead, Lokomotiv dug deep and turned the game around, if only temporarily. Artur Kayumov tied the scores in the fifth minute and midway through the first period, Vladimir Tkachyov put the Railwaymen in front.

“We played better today than in the first match,” Skabelka said after the game. “We had more good chances, some things already started working out for us. But there are still more things we need to work on. In the second period, we weren’t good enough. Allowing 12 goals in two games means there’s a lot of work to do.”

SKA, meanwhile, has a clinical look that belies this early stage of pre-season. Valery Bragin’s team showed in the first game that it could step up the tempo almost at will, and demonstrated that once again here. A burst of three goals in less than three minutes saw the Army Men take control and, from that point on, it was a question of ‘how many?’.

Kuzmenko finished the game with two goals and, once again, SKA’s youngsters made a contribution. Kirill Marchenko potted a power play goal to make it 5-2, assisted by Vasily Podkolzin, while Danila Galenyuk had a helper on the sixth and final goal of the game, scored by Anton Burdasov.

And, for assistant coach Andrei Kozyrev, the contribution of the youngsters was one of the highlights of the day. “I’d like to mention the debut of our young player Marat Khusnutdinov,” Kozyrev said. “He’s a talented kid and we were delighted to see him get his chance today.

“We have three lines set up and we’re already playing with them,” the coach added. “And we’re also looking forward to getting another of our youngsters, Ivan Morozov, back after injury. He’s not far away, he’s already in full training.” 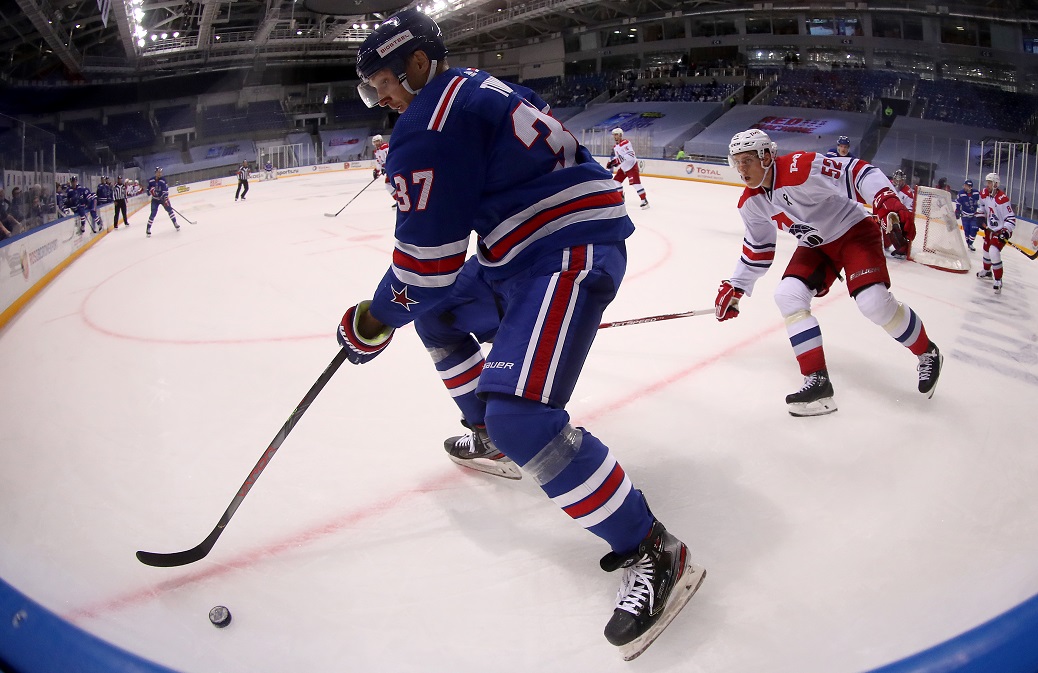 Amur picked up its second victory in three pre-season games, downing VHL outfit Sokol at a behind-closed-doors meeting in Moscow.

Denis Golubev has enjoyed a lively start to his campaign and continued in effective form with three points in this game. The forward opened the scoring late in the first period then, after Sokol tied it up early in the second, Golubev added two assists as Amur took charge of the game late in that middle frame. Alexander Gorshkov and Alexander Polunin were the beneficiaries of Golubev’s efforts; the forward is on 5 (2+3) points from three appearances so far this summer.

In the third period, the teams traded a goal apiece. Sergei Shestakov struck early to give Sokol hope of a fightback, but Igor Velichkin’s 46th-minute tally restored the Tigers’ two-goal advantage and gave us the final scoreline.