Tomi Lamsa came out on top in the battle of the rookie coaches as his Salavat Yulaev hit five unanswered goals in the third period to defeat Bill Peters’ Avtomobilist. Anvar Gatiyatulin enjoyed a winning return to Chelyabinsk as Traktor edged Ugra 1-0.

Two of the KHL’s newest head coaches faced off in their teams’ first pre-season game — and for Bill Peters of Avtomobilist it was a reminder of how quickly hockey fortunes can change.

The former Edmonton Oilers boss, appointed this summer to replace Andrei Martemyanov, saw his new charges impress for 40 minutes of this game. But then he saw the scoreline turn upside down as Ufa scored five unanswered goals to move from a 1-4 deficit to a 6-4 victory.

The Motormen were without several key players: imports Jakub Kovar, Brooks Macek and Peter Holland missed out, while Chay Genoway and Dan Sexton have only just received work visas. Pavel Datsyuk also sat this one out, with Peters taking the chance to look at several youngsters. Tomi Lamsa, incoming head coach for Salavat Yulaev, put Finnish forward Markus Grandlund into a line with Nikita Soshnikov and Teemu Hartikainen but also named a roster that combined youth and experience.

Initially, it was Avto that looked stronger. Kirill Pilipenko, back at his hometown team after several seasons in the VHL, opened the scoring midway through the first period. That was the only goal of the opening stanza, after which 20-year-old Ufa goalie Dmitry Braginsky replaced Juha Metsola. The rookie was soon beaten Evgeny Mityakin before Alexander Sevostyanov made it 3-0 midway through the game. Ilya Barabanov pulled a goal back, but 23-year-old Pilipenko got his second of the game to extend the visitor’s lead.

But the third frame saw Salavat Yulaev power back into the game. Alexander Kadeikin reduced the deficit early in the session, then Granlund and Soshnikov combined on a Philip Larsen effort midway through the period. Junior prospect Alexei Pustozyorov tied the scores then Hartikainen put the home team in front as the top line clicked once again. Baranov got his second of the game to wrap it up, the 24-year-old staking his claim for more KHL action after spending the bulk of his time to date in the VHL. 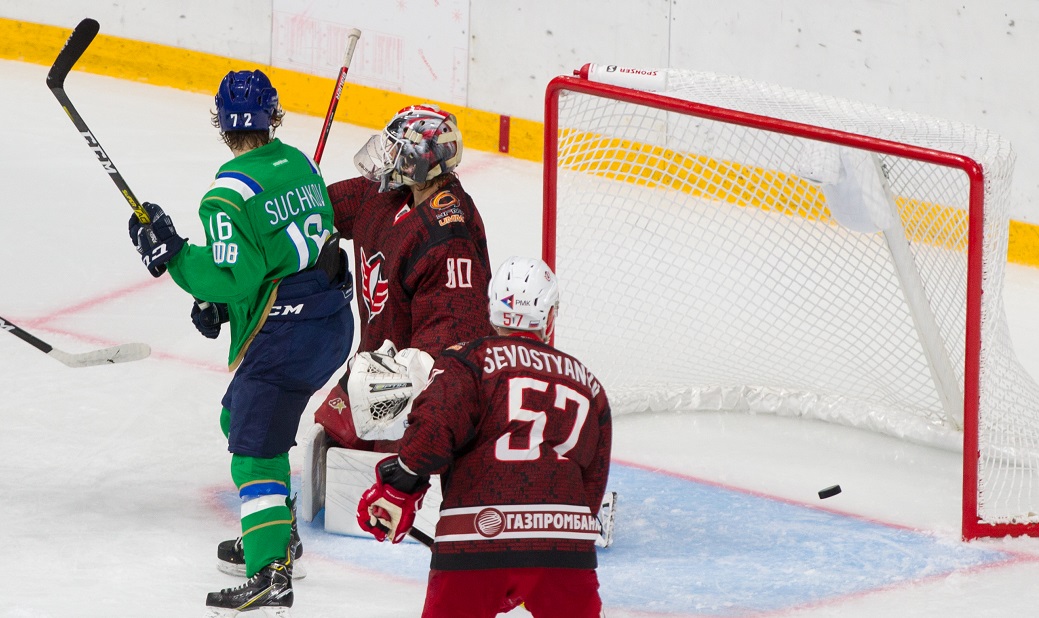 Anvar Gatiyatulin enjoyed a winning start on his return to Traktor, edging past VHL outfit Ugra in a low-key warm-up game. The teams had been due to meet on July 30, but it was rearranged for Sunday. That enabled Gatiyatulin to deploy most of his imports, with only Czech goalie Roman Will missing out on this one. Traktor’s first line saw debutant Pontus Aberg line up with Lukas Sedlak and Tomas Hyka.

That line almost opened the scoring in the first period, but Hyka’s effort was ruled out for offside. The same player dinged the piping in the second period, but it wasn’t until the 57th minute that we saw the only goal of the game. Swedish defenseman Lawrence Pilut, another summer signing, fired in a shot that Vyacheslav Osnovin deflected past the Ugra goalie to win the game for Traktor.