The big news of the week was the announcement that Alexei Morozov would take over as KHL President. On the ice, the playoff race continues – and the goalscoring race went into overdrive on Saturday as the leading contenders fired in eight goals between them.

Alexei Morozov is the new president of the KHL. His appointment was announced last week with the unanimous backing of the board of directors. The 43-year-old is best known for his illustrious playing career, which saw him win two Gagarin Cups, two World Championships and an Olympic silver medal. Since his retirement in 2014, he has been in charge of the Junior Hockey League and served as KHL Vice-President for hockey development. Morozov replaces Dmitry Chernyshenko, league president since 2014, who is taking up a new role as Deputy Prime Minister in the Russian government.

Speaking to journalists last week, Morozov restated his commitment to imposing a hard salary cap in the KHL next season. He also spoke of the league’s desire to expand into both Europe and Asia, and offered a cautious assessment of the prospect of challenge games against NHL opposition and KHL participation in the Champions Hockey League.

Alexei Morozov: ‘We stand by our salary cap’ 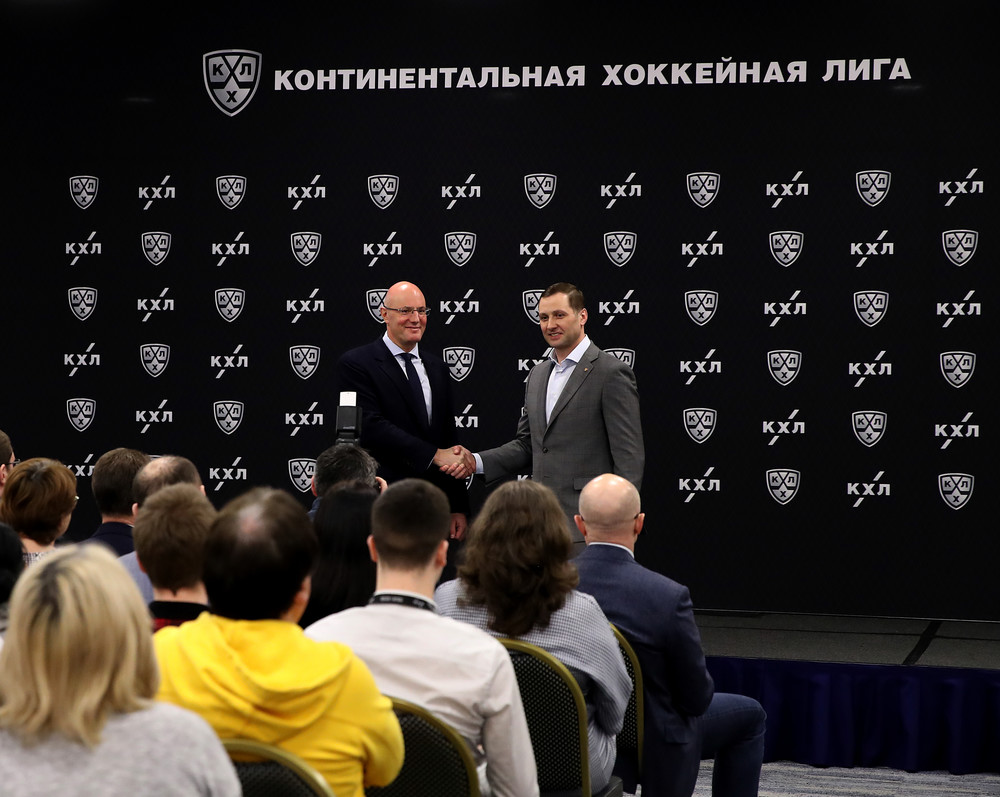 Three more teams punched their playoff tickets last week. In the west, Spartak and Lokomotiv got over the line, meaning six of the eight spots are now filled. Vityaz, Torpedo and HC Sochi contest the remaining two places, with ninth-placed Sochi looking to recover a three-point deficit on Torpedo, albeit with a game in hand.

In the East, Sibir became the fifth team to confirm its place, ending a three-year wait for post-season action. Below, the race for the remaining berths is going down to the wire. Salavat Yulaev looks all-but secure in sixth, but below that Kunlun Red Star and Metallurg are tied on 60 points in seventh and eighth, Neftekhimik’s four-game winning streak puts it two points further back and Amur’s incredible recent run keeps it in contention on 56 points. Metallurg hosts Kunlun on Monday in what promises to be a crucial battle in that race.

Saturday brought a goal rush throughout the KHL – and the three leading contenders to be the league’s top sniper were all in form. Salavat Yulaev’s Nikita Soshnikov started it off with a hat-trick in his team’s 4-5 loss against SKA. The former Leafs and Blues man moved on to 27 goals, level with Dynamo’s Dmitrij Jaskin. Kirill Kaprizov scored twice in CSKA’s 4-0 win at Lokomotiv, also going to 27 goals. Then Jaskin wrapped up the day with a hat-trick in Dynamo’s 7-6 overtime victory in Riga, making him the first player to reach 30 goals this season and restoring his advantage in the race.

Dmitrij Jaskin’s hat-trick proved decisive in a 13-goal thriller in Riga, where the local Dinamo belied its position at the foot of the table and put up a huge fight against Dynamo Moscow. The action was relentless, beginning when Daniil Tarasov gave the Muscovites the lead after just 11 seconds. Riga rallied fast, and led 5-2 at the first intermission, only for Dynamo to hit back and tie the game in the second period. The third brought just two goals, but no shortage of excitement as the Latvians snatched a last-minute tying goal through Gints Meija. 6-6 after 60 minutes, and on to the extras; Jaskin potted the winner to leave veteran head coach Vladimir Krikunov admitting he’d never seen anything like it in 35 years in the game.