Vityaz is one of the surprises of the season. The Moscow Region team is among the leaders not only in the Western Conference but even in the overall standings.

Such a successful team, of course, is going to attract much attention to its players. It's not a surprise that Jerabek and Semin are almost fixed guests of the Best Players of the Week award. In this exclusive interview, Jakub Jerabek told KHL.ru about his team’s start, Vityaz’s strong sides, and his two-season experience overseas.

“In the locker room, we constantly ask each other if we aren't just dreaming”

Vityaz recently had an eight-game winning streak and led the KHL standings. Most likely, the journalists are as surprised as the players. “Frankly, we didn’t get questions about it from the press,” Jerabek explains. “In the locker room, we constantly ask each other if we aren't just dreaming. And then we realize right away that it’s not just a dream. The key part was the first few games, we played very well there. This gave us confidence. Then everything was much easier. However, we try not to overrate this early success. You know how it works with sports: today you’re on the top, and tomorrow you’re gone. You simply need to live day by day and show that you can win against anyone.”

Thanks to his strong play, the League recognized Jakub Jerabek as the best defenseman of the third week. Usually, teams create some kind of cash for the players to contribute. “Yeah, we have a full price list for that, it's written what we should pay and how much,” the defenseman explains. “However, I haven't been said anything about it yet. I'm glad that also Alex Semin was awarded – if we both pay it will be cheaper” – the Czech veteran laughs off. 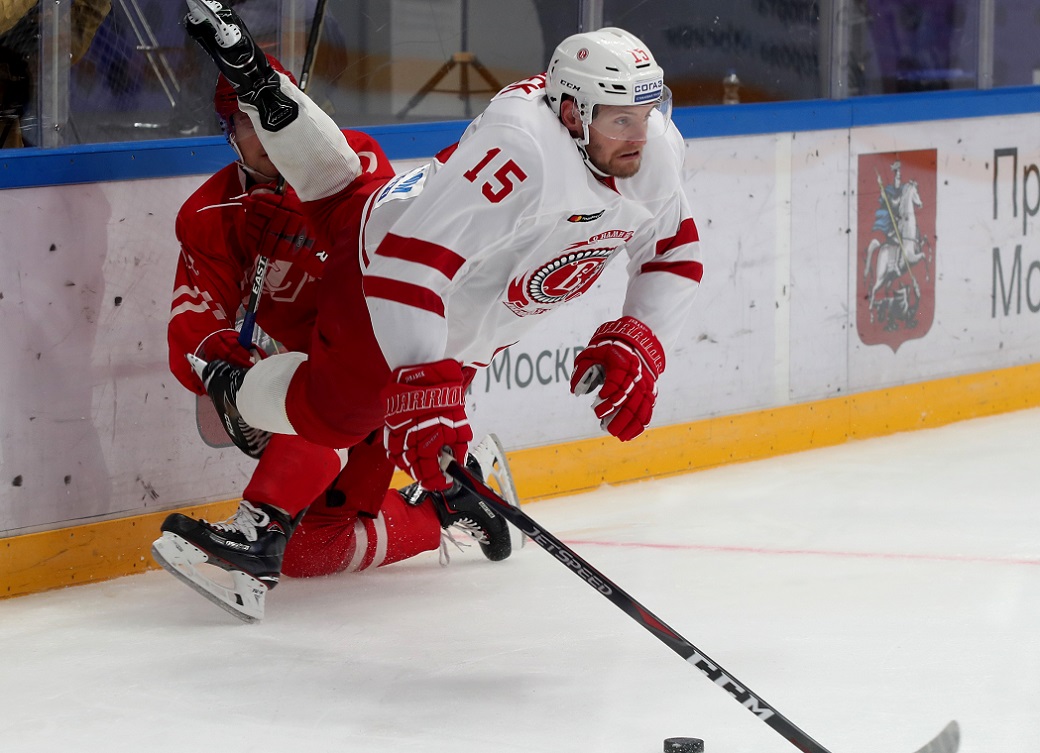 “Coach spends a lot of time communicating with his players”

This summer, Jerabek returned to Vityaz after spending two years in North America. “I fully understand that I was back after the first part of the training camp,” he says. “We had a lengthy camp in Italy, then we moved to Finland. There I started feeling that we were an excellent team. I remember a talk I had with Miro Aaltonen, we both had the impression that Vityaz will be hard to beat. I’m glad that our forecast was correct.”

However, the Czech wasn’t exactly delighted with the training camp in Italy, during his first season with the team. “I have to say that now the practices are very different,” Jerabek says. “We were in the same facility, but everything was much more structured. We also run less than before. That is, it was easier to live through.”

Much changed within the team since Jerabek first came to the Moscow Region. “We had a new coach, and the team signed new players,” the blueliner explains. “Most of the people with the team stayed, and that’s why I feel at home in Podolsk. I feel like I never went away.”

In particular, this summer Vityaz hired Mikhail Kravets as the team’s new head coach. “He’s a coach who spends a lot of time communicating with his players,” Jerabek enjoys playing under him. “It’s always a big plus. He can create the right environment within the team and can even joke with us. However, he supports a tight discipline and doesn’t allow us to relax too much. I’ve heard that he’s got a rich past in hockey, but he never mentioned it.”

For Kravets, his job with Vityaz is the first full-time employment as a head coach of a KHL team. It can be said that he learned on the field. “I guess that each coach has something to learn,” Jerabek says. “Especially when he gets to a new team with new players. The most important thing is to learn how to communicate with his players. And he has no problems with that.” 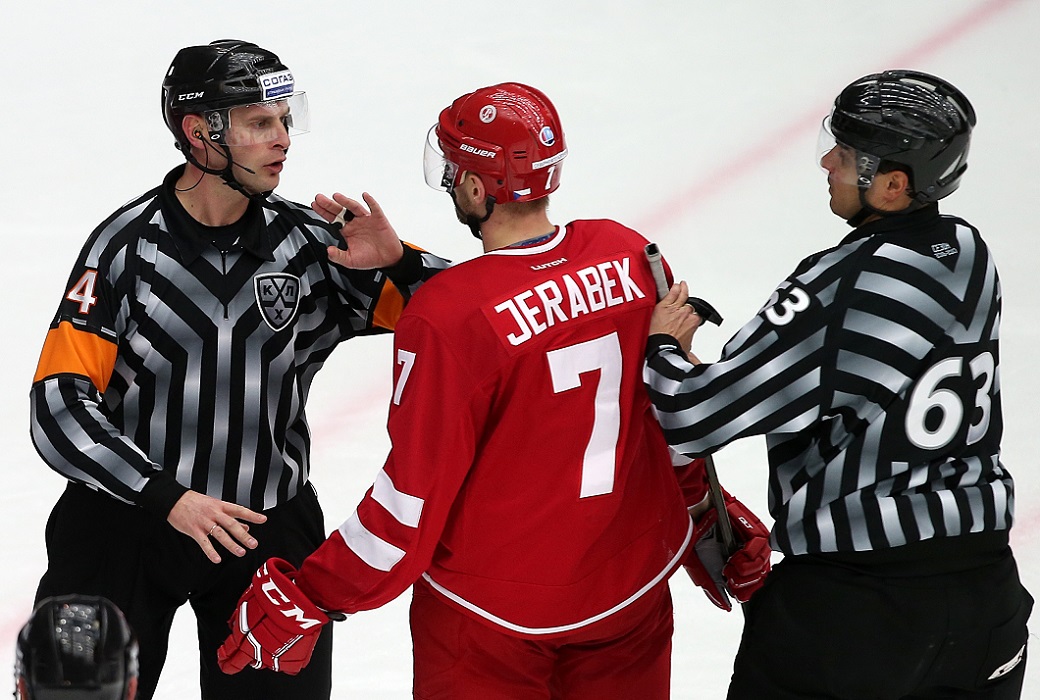 “It's great that now Artyukhin is with us, and not against us”

This summer, Vityaz signed Evgeny Artyukhin, back to the KHL after one-year hiatus. The forward is known for his physical play. “Trying to outmuscle him is useless,” Jerabek admits. “You need to outsmart him. Pick the right position, wait for the right moment, and go against him. However, Artyukhin isn't only big, he's also got a ton of experience. And he perfectly knows what his opponents are going to do. It's hard for us defensemen to play against him, it's great that now he's with us, and not against us.”

Jerabek’s path has got a lot in common with Finnish international Miro Aaltonen. Both the forward and the defensemen played for Vityaz, then tried to establish in North America, just to get back to the Moscow Region. “Miro and I have a lot in common,” the Czech defenseman explains. “We played together for Vityaz, and then we met again in North America. Twice we played one against another, and then we joined to have dinner together. Aaltonen is one of the Vityaz players with whom I talk the most.”

Jerabek spent two years in North America, playing within the Montreal Canadiens, Washington Capitals, Edmonton Oilers, and St. Louis Blues systems. “My second year was less successful than the first,” Jerabek says. “However, I am delighted to have done that experience. I think it really helped me. I also think that each experience, being it positive or negative, makes you a better human being. In my case, I had more positive things than negative ones. I don't feel like I made a mistake, signing overseas.”

The Czech blueliner mostly enjoyed his time with the Washington Capitals. “We had an outstanding team in Washington, and I had more than enough time on ice. However, later the team made a trade, and I didn't play with the new team. It's hard to say why it was like that. On the one hand, it was an unfortunate set of circumstances. You must be the right man at the right moment. On the other hand, I don't want to write off everything and simply say that it was all due to external factors. My qualities weren't enough.”

Jerabek can only say good things about the Washington franchise, who won the Stanley Cup when the Czech defenseman was part of the team. “It was a great team, everyone was amicable, from the management down to the players. There were no differences between the first and fourth liners. In Russia, the franchise is well-known thanks to Alex Ovechkin and Evgeny Kuznetsov, and they are both great team players, they never act like stars and think they are more important than others. With such a locker room atmosphere, you feel yourself at home. Other four players and I always traveled with the team, but almost didn’t play. However, no one ever thought that we were second-rate players. And when the team finally won the Stanley Cup, we celebrated no less than the other guys.” 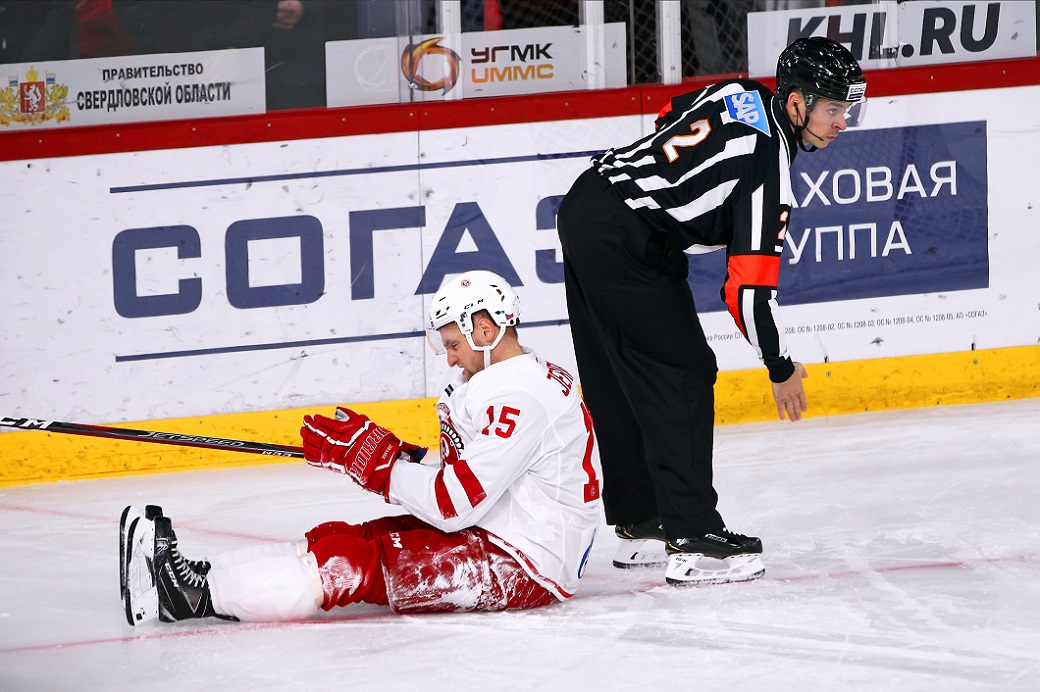 “All the Vityaz's international players are living in the same building, we are all neighbors”

However, Jerabek didn't move overseas just to cheer himself up. “I became more versatile. Now it's easier for me to adapt to new environments,” he explains. “Moreover, I dramatically improved my English. Before moving, I was sure that I was talking good English, but it turned out that it wasn't like that. Talking with my partners and the press, I understood that it's needed to give a stronger accent on this aspect. However, when I got an offer from Vityaz, I began to look forward to returning to Russia. I wanted to get back to an environment where I know everything and everyone. And of course, the Russian language is closer and more understandable for me.”

With such an approach, it can be said that Jerabek got back home. “It was pretty much like that,” he explains. “However, I needed to change place, but this was a good change. Now, all the Vityaz's international players are living in the same building, we are all neighbors. We talk a lot and often visit each other's place. My girlfriend and I were even invited to a birthday party.”

At his 28, the defenseman is now at his peak; however, he doesn't want to jump forward. “You know, after my North American experience, I understood that you shouldn't make wishes ahead of time. It's impossible to plan ahead in hockey. I want to focus on this season with Vityaz, and then we’ll see.”