Man of the week – Teemu Hartikainen

A record-breaker in Ufa, Teemu Hartikainen celebrated his 400th KHL appearance this week with yet another goal. The Finn is a hockey hero in the Bashkir capital, where his battling play has made him a mainstay of the Salavat Yulaev squad.

Piling up the landmarks

When Teemu Hartikainen got on the ice for Salavat Yulaev against Kunlun Red Star on Tuesday, he made his 400th KHL appearance. Fittingly, he scored his team’s first equalizer in its 3-2 victory, taking him to 119 goals and 286 points in that time. All of them came for the Ufa team, where the Finn is achieving legendary status as a hard-working, niggly power forward for the first line.

The goal against Red Star was typical of the Finn’s play. Get to the slot, provide an option for Linus Omark, win the physical battle against the defense and force the puck into the net. It’s a template that has worked well throughout his six previous seasons in Ufa, and particularly the last two as that partnership with the Swede matured. For the 29-year-old, those campaigns have been the most productive of his career: 41 points in 2017/18, improving to 45 last time in the regular season plus an impressive 21 (8+13) in 17 playoff games as Salavat Yulaev reached the Eastern Conference final.

Hartikainen was the leading scorer in post season and also had the best plus/minus of the playoffs, crowning a season that also saw him go to the All-Star Game for the first time. He overtook Igor Grigorenko’s scoring record. And yet, his approach to the game hasn’t changed significantly since he was a youngster in the Oilers organization, telling the Edmonton Journal: “I’m a gritty player, I hit the guys, good forechecking all the time. I want to win all the time – not just find the easy ways, but be in the corners, drive in front of the net, go there and score the goals and be a team player.”

Born in Kuopio, Finland, Hartikainen learned his hockey with the local KalPa team. Working his way through the age groups he debuted in the Liiga in 2008 aged 17. His first full season in the pro leagues saw him gaining experience playing on the wings – in junior hockey he was mostly used as a center – giving him the versatility to play anywhere on offense. His rookie campaign in 2008/09 brought 23 (17+6) points and the Finnish rookie of the year award, plus a draft call from the Oilers and successful trip to the World Juniors, where he had 9 (3+6) points in six games.

At that time, Hartikainen talked about how his physical presence – he stands 186 cm and weighs 91 kg – helped him play the power forward role and discussed his efforts to hone his skills on the ice before trying to crack the NHL.

10 years ago from @kalpa_hockey Kuopio to this day with @hcsalavat

Drafted as a sixth-round pick, Harti was invited to the Oilers camp in 2010 and initially assigned to Oklahoma City in the AHL. A solid start saw Hartikainen blossom at the turn of the year – he was AHL rookie of the month for January 2011 – and get his NHL debut at the end of the season. There was talk of him establishing himself as the Oilers next power forward, referencing both his progress in Oklahoma and also his unique status on the depth chart as a big, gritty center among a bunch of wingers with very different physical attributes.

However, the breakthrough never quite came. Edmonton signed Ben Eager, an experienced bottom-six center, and he filled the fourth-line slot that had seemed to be earmarked for Hartikainen (later, Eager would play five game in the KHL for CSKA without registering a point). The Finn went away, worked hard on his skating – widely recognized as his biggest weakness – and dominated the AHL during the 2012/13 lock-out, when he spent time on a line with Ryan Nugent-Hopkins and Jordan Eberle. After three years on the bubble, and with his contract in Edmonton expiring, he opted to return to Europe and signed in Ufa. 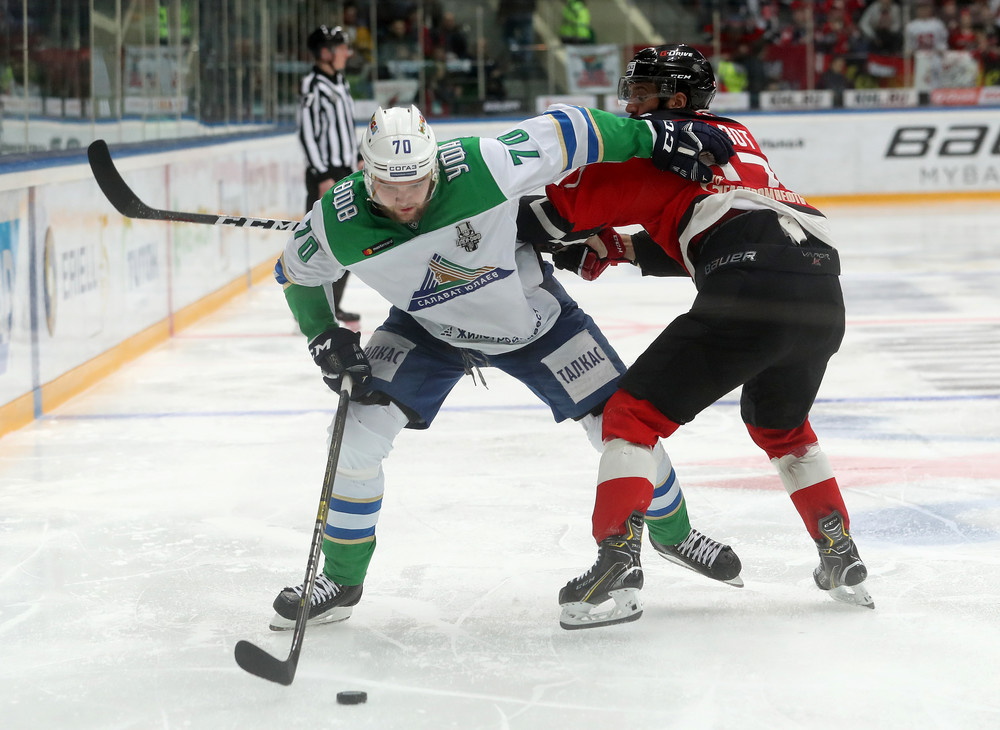 ‘He’s got the keys to the city’

Not many people imagined how well Hartikainen would fit in Ufa. Like so many imports, he arrived with a good track record in the minors and a question mark over his NHL contribution. It’s a background from which some players have succeeded hugely while others have quietly slipped away in their first season.

By the end of his sixth season at Salavat Yulaev, though, Hartikainen was part of the furniture in Ufa. Defenseman Grigory Panin, talking up the team spirit that inspired the club last season, made special reference to Hartikainen’s longevity. “It’s like he’s got the keys to the city, and we get so much from that,” he told Ufa news site Gorobzor. “He’s been here longer than anyone else on the team.”

And praise has come from the highest level: at the end of the season he received the ‘Order of Merit for the Republic of Bashkortostan’ from President Radiy Khabirov. “Six years ago, when I started my KHL career in Ufa, I could never have believed that some day I would get [this],” the forward commented.

When he arrived at the club, it was a very different set-up. Vladimir Yurzinov was head coach, a young Andrei Vasilevsky was emerging as a star goalie and Igor Mirnov was leading the scoring. That team reached the conference finals, with Hartikainen contributing 30 (14+16) points in 47 regular season games and a further 8 (2+6) in the playoffs. As times changed, he would play alongside Grigorenko for a while before establishing that impressive partnership with Omark in recent years.

Even then, it wasn’t always plain sailing. As recently as this time last year he was shunted off the first line after a slow start to the season brought just five assists in eight games. Under pressure, head coach Nikolai Tsulygin began reshuffling the Salavat line-up and gradually built the kind of chemistry that culminated in a post-season surge – with a rejuvenated Hartikainen at its heart.