Classical battle in the Western finals. The Army rivalry is back

The Russian version of El Clasico is back for the playoffs as CSKA and SKA will face at this stage for the fourth time in five years.

In 2017, the Western Conference finals were disputed between SKA and Lokomotiv Yaroslavl, with St. Petersburg sweeping the Railwaymen en route to their second Gagarin Cup triumph. SKA retained a few players from the 2017 victory, like Nikita Gusev, Igor Shestyorkin, Pavel Datsyuk, Sergei Plotnikov, and Anton Belov.

CSKA had the best in last year’s encounter, when they skated past SKA in six games, with the series-clinching goal arriving in OT on the sixth game at the hands of Mikhail Grigorenko – who is in fantastic shape this year as well.

In its path towards the Western Conference finals, SKA survived to Spartak’s attacks in the first round (4-2) and got rid of Lokomotiv (4-1) in the conference semifinals. Its Moscow-based rivals steamrolled Vityaz (4-0) and disposed of HC Dynamo (4-1) as they lost only one game in this year’s postseason.

This year, SKA was no matchup for the Red Army, who won all the four contests played this year, including the record-setting outdoor game on December 22, when goals by Linden Vey, Pavel Karnaukhov, Kirill Kaprizov, and Jannik Hansen for the Red Army translated into a 4-1 win in front of a crowd of more than 67,000.

The St. Petersburg Army is getting significant contributions from Nikita Gusev, who leads the League in points with 14 (6+8), tied with Salavat Yulaev’s Teemu Hartikainen; and David Rundblad, who leads the League in game-winning goals with four. It’s interesting to note that every single goal scored by the Swedish defenseman has been a GWG thus far. If Rundblad continues with his incredibly clutch game, Ilya Vorobyov will have further ammunition to their rich offensive arsenal.

Naturally, goalies are also giving a significant contribution to SKA’s playoffs’ success. Both Igor Shestyorkin and Magnus Hellberg are playing well, with the latter playing the most games for the Army team. Another player who’s having a strong postseason is Sergei Plotnikov. The veteran forward has been instrumental for SKA as he is tied for the second-most assists in the playoffs and leads the whole league with 49 hits.

In Moscow, things are doing even better. The morale is very high in the locker room after two convincing performances against Vityaz and HC Dynamo, and many players are showing their best hockey in this postseason. Mikhail Grigorenko is building on a great regular season and is currently in the top five in scoring in league with 12 (6+6) points in just nine games. The Red Army forward was excellent last year too, and his chemistry with Kirill Kaprizov will play a critical role in the series as it will be hard for SKA’s defense to stop the Muscovite dynamic duo.

Other players who are doing great in this postseason include defenseman Nikita Nesterov, who scored 7 (2+5) points in nine games, but is now in a four-game drought; Alexei Marchenko, who seems to be back to his old self this season after a disappointing 2017-18 campaign and is now among the League’s leaders in the plus-minus department; and Konstantin Okulov, who is the second top scorer in the team with 11 (5+6) points and boasts the best plus-minus among CSKA forwards, tied with Linden Vey.

In goal, Ilya Sorokin is having a fantastic postseason. He played all the games for his team, posting two shutouts, a goals-against average of 1.00 (leads the League in both figures) and a saves percentage of 95% (trails only to Juha Metsola). If things don’t go well, the Red Army has another strong option between the pipes in Lars Johansson – who recently renewed his ties with CSKA for further two seasons.

Considering the way the teams played among them throughout the season, it’s hard to avoid considering CSKA the favorite to reach the Gagarin Cup finals from the Western Conference, repeating last year’s accolade. However, SKA has enough firepower and solid goaltending to give the Red Army a good run for their money. If both teams can play their best hockey, the fans will have in front of them a long and intriguing series.

The Western Conference Finals between the Army teams will kick off on Thursday in Moscow. 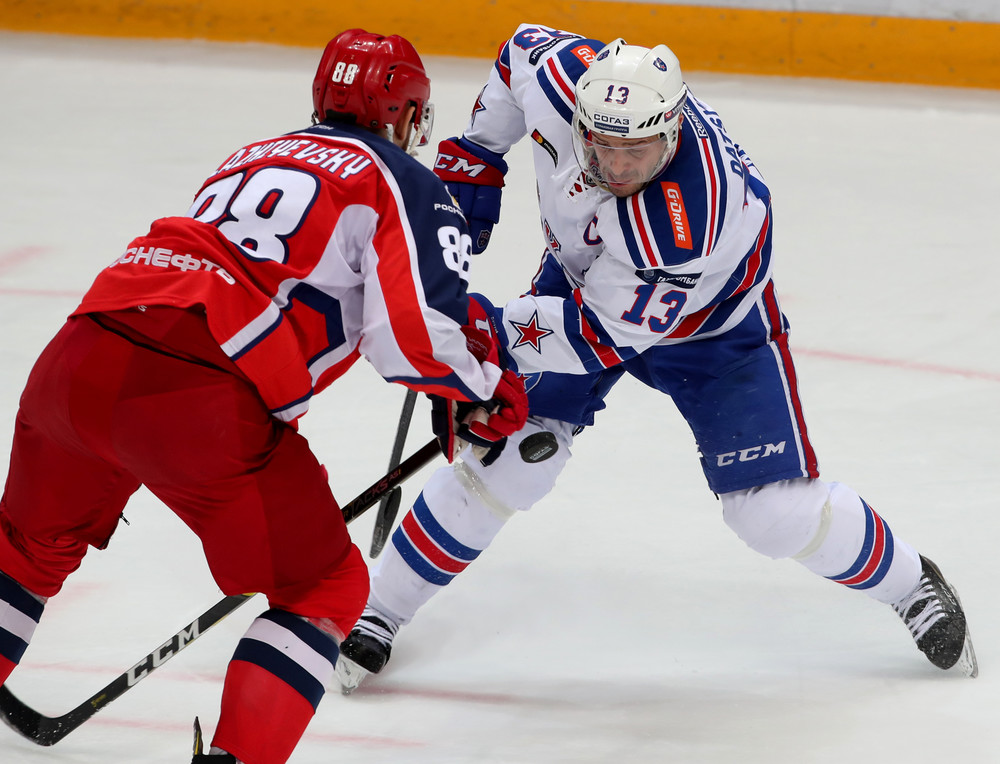