Russia won the 2018 edition of Karjala Cup with a game to spare thanks to a 4-1 victory over World Champion Sweden in Helsinki on Saturday.

Russia’s win, coupled with a 3-0 success for Finland against the Czech Republic, means that Ilya Vorobyov’s youthful roster cannot be overtaken in the four-team tournament. On Thursday, Russia began with a 3-0 victory against the Finns.

It was a big day for Andrei Kuzmenko, who potted his first goal in international hockey. The SKA man opened the scoring midway through the game and followed it up with the 3-1 goal in the 51st minute. During Friday’s off day, the forward also won the team’s internal table tennis championship; Vorobyov jokingly suggested the two successes might be linked.

The man of the moment later admitted that playing Eurotour hockey wasn’t all that different from the level in the KHL. “I didn’t see any fundamental difference,” he said. “Sure, you have better players here from different teams but the big thing is that you are playing for your country. That even made me a little nervous. It’s a little bit quicker here, but I don’t think there was a big difference from the CSKA – SKA game.”

Another interesting subplot in the game saw SKA’s two goalies, Igor Shestyorkin and Magnus Hellberg, lining up against one another. Hellberg ended up allowing three goals to his clubmates – two for Kuzmenko, one for Evgeny Ketov – with Lokomotiv’s Andrei Loktionov putting the fourth into an empty net. Shestyorkin was beaten just once when Jakob Lilja pulled it back to 2-1 early in the third frame. The Russian goalie shrugged off the club rivalry: “I couldn’t say it really affected the game because I was playing against Magnus,” he said. “I didn’t even see him before the game.”

As with the opening game against Finland, head coach Vorobyov was keen to talk up the team performance rather than pick out individuals. “All the guys did well, they did their jobs,” he said. “They did everything the coaches asked of them. I don’t want to single out this or that individual. In these two games here we’ve played really good team hockey, so I’d like to pick out the whole team.” 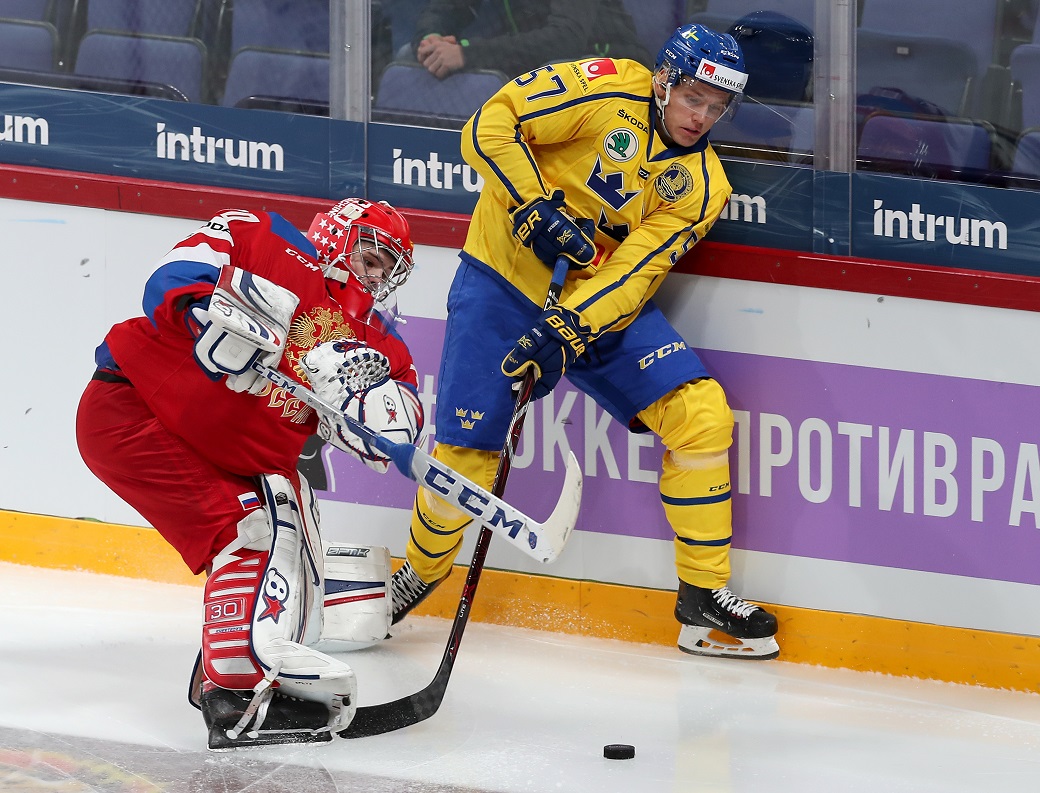 In the second game of the day, Finland powered to a 3-0 victory over the Czechs, with goals from players at Jokerit and Neftekhimik. Joonas Nattinen and Sakari Manninen were among the scorers for the Leijonat.

KHL players were also in action for Russia in the Deutschland Cup, with Konstantin Okulov’s power play goal completing a 2-1 victory over Slovakia. Earlier, Nikita Mikhailov scored his first ever goal for Russia’s B team. Tomorrow, the ‘Olympic’ team faces Switzerland to decide top spot in the four-team competition.

And in U20 action, Lokomotiv prospect Grigory Denisenko picked up five points in a victory over the Czech Republic. The Panthers draft pick had 3+2 in a 6-5 success. Lokomotiv team-mate Nikolai Kovalenko had four assists, and Traktor’s Vitaly Kravtsov had 1+2.