Winning start for Russia in Finland

There was a strong CSKA accent as Russia began its Karjala Cup campaign with a solid 3-0 victory over host nation Finland in Helsinki on Thursday.

Head coach Ilya Vorobyov named a youthful and experimental for the first event in this season’s Eurotour, with seven players in line for their international debuts. Finland selected 12 KHLers in its roster and all of them featured here. Salavat Yulaev’s Juha Metsola played in net and the first line comprised Jokerit’s Marko Anttila and Mika Niemi alongside Joonas Nattinen of Neftekhimik.

But the eye-catching performances came from names with established international reputations. As early as the fifth minute, Russia took the lead when Finland turned over possession in center ice. Andrei Loktionov (Lokomotiv) fed Mikhail Grigorenko and the CSKA man burst down the wing before firing home a wrist shot.

It wasn’t long before the Russians converted their first power play opportunity of the game – and this time it was an all CSKA affair. Defenseman Nikita Nesterov produced the shot from the blue line, clubmates Grigorenko and Kirill Kaprizov collected assists on the play. At the other end, goalie Ilya Sorokin – yet another CSKA representative – maintained the Russian advantage with a smart save to deny Salavat Yulaev forward Teemu Hartikainen. That was just one of the 28 saves the goalie produced to deny Finland a way back into the game. 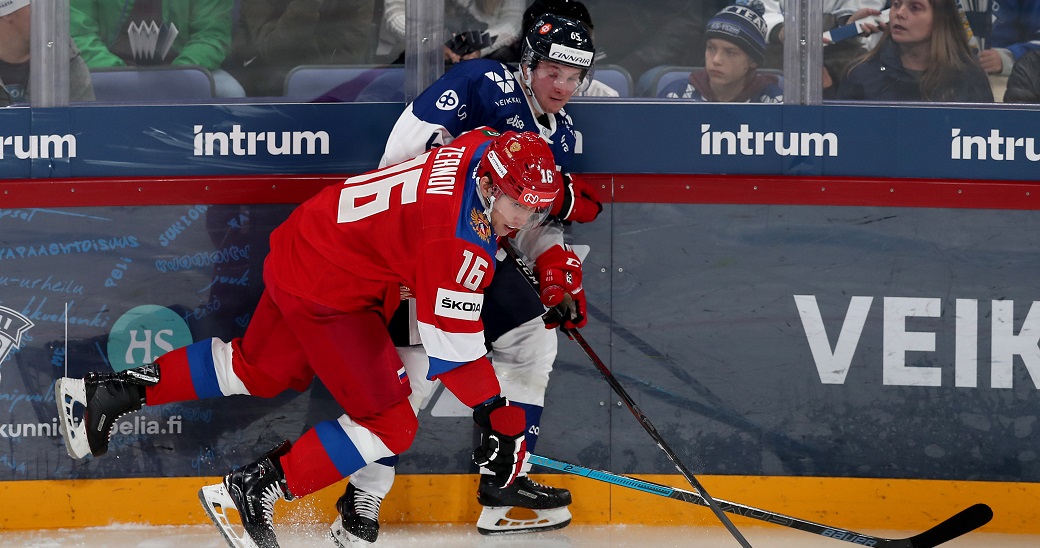 In the second period Ak Bars defenseman Andrei Pedan – one of the new faces in Vorobyov’s roster following his summer return from North America – added a third goal; Ivan Telegin’s assist kept up the CSKA contribution here. With a commanding lead, it was all about game management in the third and Russia performed strongly to help Sorokin to a shut-out.

Vorobyov declared himself happy with his team’s start. “3-0 is a good result,” he said. “All the guys did their jobs well and delivered what the coaching staff asked of them. Every line carried out its tasks and everyone fulfilled his role today. I don’t want to single out individuals, I’d rather talk about the whole team.”

In Thursday’s other Eurotour game, Sweden won 3-2 in Prague against the Czech Republic. Amur defenseman Jan Kolar was among the Czech scorers.