CSKA produced a vital victory to ensure this series remains very much alive. After the home team’s disappointment on Monday, sunk by a SKA goal blitz, game four of the series had the feel of a must-win encounter. Tie the series, and everything is up for grabs; slip to 1-3 and it’s hard to see a way back.

The stakes were high, but the first period was played at a high tempo. True, there were relatively few big moments in front of either net. However, neither team was playing it cagey; the lack of scoring chances was a reflection more of the quality of defensive play on display than anybody trying to stifle the game early on.

However, when SKA went ahead in the 34th minute, things looked bleak for CSKA. The Muscovites had enjoyed much the better of the second period, with Mikko Koskinen frequently tested. Sergei Andronov and Valery Nichushkin produced perhaps the most dangerous moments in front of the visitor’s net but found the Finn in unflappable form despite an incident that saw him take an inadvertent stick to the face from Vladimir Zharkov.

But SKA took the lead. A power play saw Vadim Shipachyov take play behind Ilya Sorokin’s net before feeding the puck back to Slava Voynov. His one-timer from the top of the circle flashed past the goalie and the visitor had its reward. In fairness, SKA enjoyed more of the attacking possession in the second period and eventually its patience around the net paid off.

At that stage, with SKA ahead in the game and set fair to take a 3-1 lead in this Western Conference Final, CSKA needed inspiration. Early in the third period, it arrived. 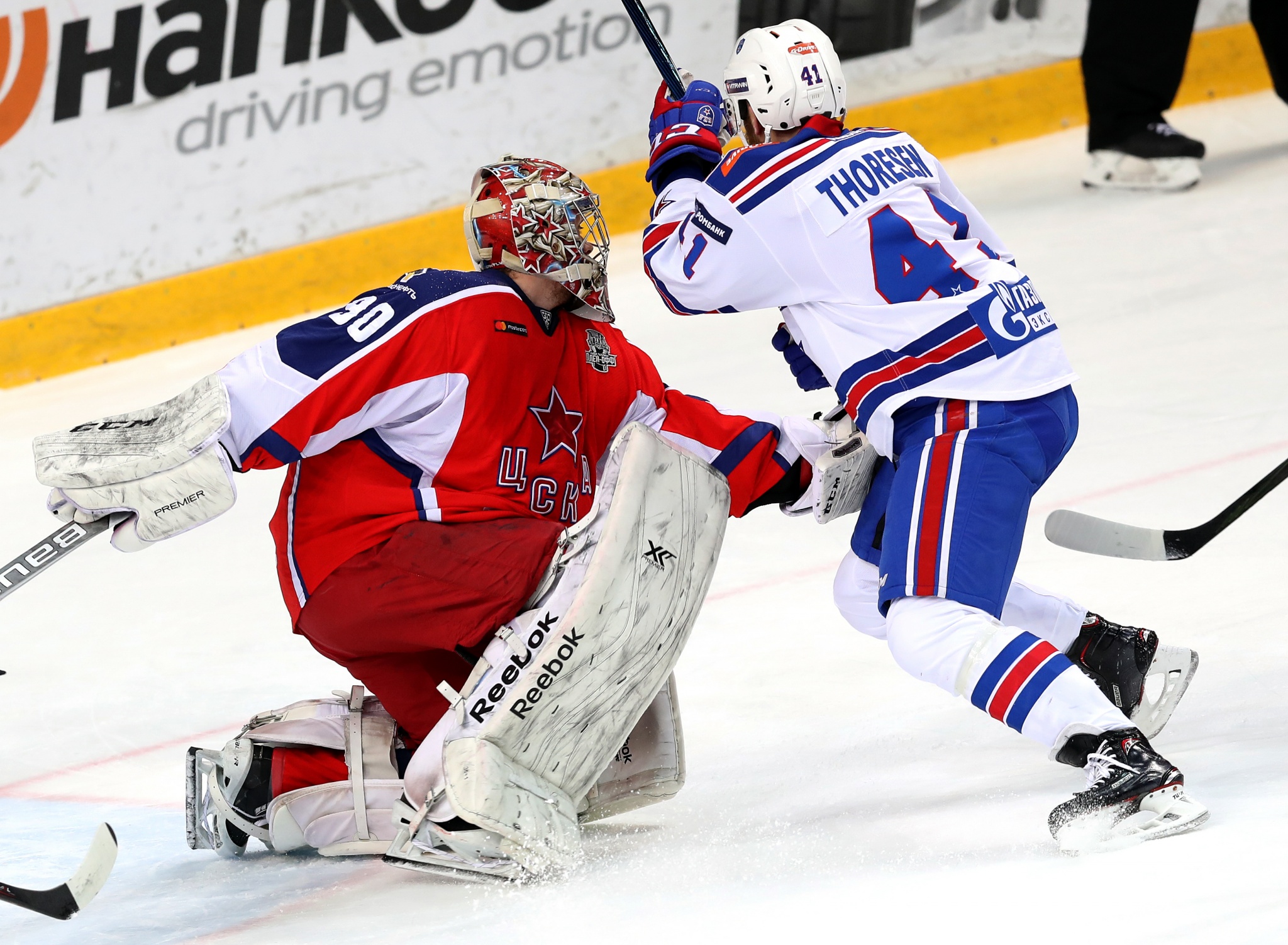 The teams were playing four-on-four after Ilya Kovalchuk and Mikhail Pashnin got into a tussle, and CSKA took advantage of the extra space on the ice. Mikhail Grigorenko took the puck into the SKA zone, Alexander Popov went deep into enemy territory and his feed went all the way back to Mat Robinson, arriving from the blue line to shoot home the tying goal with a powerful wrister.

Then came Nichushkin, battling out of the corner, getting away from Voynov and finding Andronov on the slot. Andronov’s attempt on the back hand was padded away, but Nichushkin had followed up his own play to swat home the rebound and give the home team a vital lead. The turnaround took just two minutes and 17 seconds; the series jumped from ‘almost finished’ to ‘alive and kicking’.

Of course, there was still the small matter of holding onto that lead for the remaining 16 minutes of the game. CSKA had its share of anxious moments, with Shipachyov going close shortly after Nichushkin’s goal and Kovalchuk almost converting a rebound from a Vladislav Gavrikov slap shot. The pressure grew ever more intense, especially when Bogdan Kiselevich twice found himself in the box. The second of those penalties came in the last minute and offered SKA a spell of 6-on-4 play, but the visitor’s efforts to save the game were hampered when Sergei Plotnikov took a penalty of his own to disrupt his team’s flow. CSKA weathered the storm and tied up this series ahead of Friday’s return to St. Petersburg.