Life at the top and life at the bottom are always very different … but the contrast was heightened by this week’s results. While SKA set records – and was challenged to improve still further – Lada and Dinamo Riga slipped to their 10th successive losses. Elsewhere, Spartak served up a thriller, and Swedish goalie Magnus Hellberg fell under the spell of the Orient.

Taskmaster of the week – Oleg Znarok

Oleg Znarok is renowned for being difficult to please, but the SKA head coach was unusually grumpy in Saturday’s press conference in Khanty-Mansiysk. “The game could have been very different,” he said. “We made some huge errors but the opposition couldn’t take advantage.” While that may not sound like particularly stinging criticism, some context is helpful. SKA had just beaten Ugra 9-1 to record its 14th successive victory. Clearly, nobody in Petersburg will be resting on any laurels.

14 games, 14 victories. That’s SKA’s sequence since the season started on August 22. It’s a new KHL record winning streak from the start of any season, improving on the 12 wins with which Vyacheslav Bykov’s SKA began the 2014-15 campaign. It’s also closing on the all-time KHL record winning streak, which stands at 18 (Avangard, 2009-10). SKA has two games this week, at Barys on Monday and Sibir on Wednesday, as it chases down that little piece of history. The 14-game winning run isn’t the only record Znarok’s team has set; Saturday’s thrashing of Ugra also saw SKA’s power play find the net for the 14th game running.

It’s tough at the top, but it can be even tougher at the bottom. Lada and Dinamo Riga both saw their losing streaks reach double figures this week and both teams are marooned at the foot of the Eastern and Western Conferences, respectively. Curiously, Neftekhimik was the team to inflict the 10th straight loss on both clubs, defeating Dinamo 2-0 on Wednesday and winning 2-1 at Lada on Sunday. That’s not the only link between the two strugglers: Lada’s head coach, Artis Abols, began his coaching career as an assistant to Julius Supler at Dinamo and had his first taste of life as a head coach in the Latvian capital. Meanwhile, in Riga, Latvian hockey legend Sandis Ozolins is finding out that life as head coach is a different challenge from the being a great player. Dinamo begins a home stand on Monday with the visit of Kunlun Red Star, Lada remains in Togliatti to face HC Sochi (Tuesday) and Salavat Yulaev (Thursday).

It’s a long way from the New York Rangers organization to helping to nurture China’s first pro hockey team. But for Kunlun goalie Magnus Hellberg, who picked up his first ‘goalie of the week’ award for his new club Monday last, it’s been an experience to savor.

Speaking exclusively to KHL.ru, the Swede admitted that he knew little about China before he arrived, but added that he’s settling in fast. “I like the city, I like the food, we’re getting a good response from people here, the audience is growing,” he said. “When the Chinese do something, they do it well, and I’m sure we’ll see that with their hockey in a few years. It’s a privilege to be part of an adventure like this and build hockey in China. I hope we can do it quickly.” 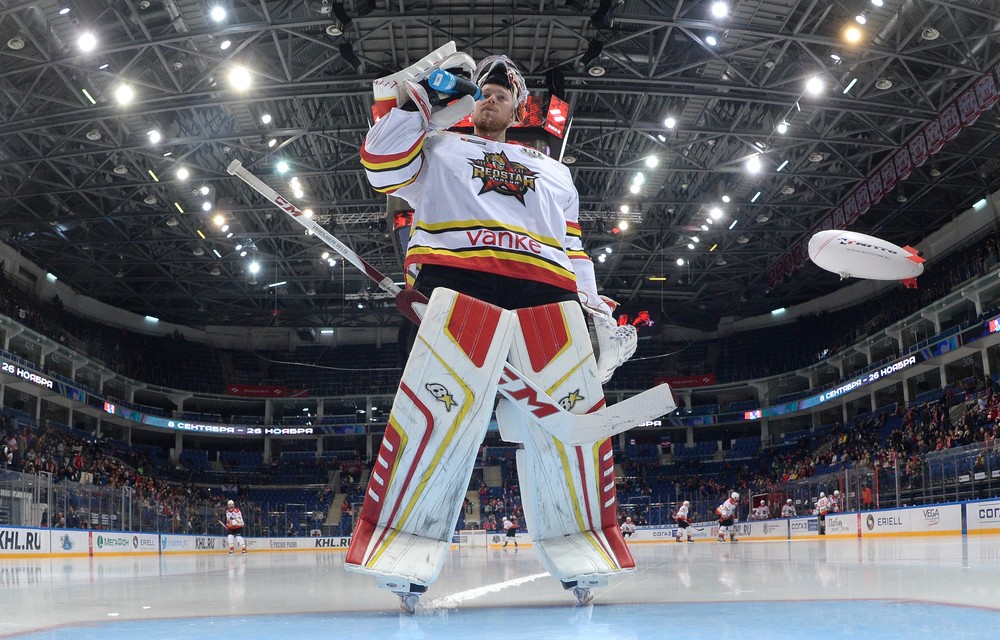 The game of the week came from an unexpected match-up. Thursday’s clash between Spartak and Admiral was not, in truth, one of the stand-out clashes of the week. But it produced a sensational game that including a dramatic tying goal with 0.02 of a second left to play. That effort, from Alexei Pepelyayev, made it 6-6 on the night, wiped out a two-goal lead that Admiral established with less than 10 minutes to play and paved the way for Anatoly Nikontsev to give the Red-and-Whites an overtime verdict by the odd goal in 13. That’s a breathless night of entertainment in anyone’s book.

New leaders in both conferences. JHL week in review

Level of competition is extremely high in this JHL regular season as new leaders in both conferences were established. In western conference SKA-1946 from Saint-Petersburg had a great six match winning streak ended in the battle against 2015/16 champions Loko. Despite that SKA-1946 took the lead in the conference with one point advantage against MHK Dinamo from the same city.

Similar situation is in the Eastern conference. Irbis from Kazan lost just once in the last eight matches and overtook Mamonty Yugry with one point lead. Sibirskiye Snaipery and Reaktor also had good weeks though and they are also in good shape for the near future battles.

Let’s wrap this up with a fun fact. On September 22-nd Chaika played against SKA-Serebryanye Lvy and won 2:1. The winning goal was scored by Artyom Chaika. Who else should score the winners for ex-champs?

We are now two weeks into the WHL Championship's 2017-18 season, and sitting atop the current standings is Dynamo Saint Peterburg. The women from Russia's “northern capital” have played four matches, winning two in regulation and a third in overtime, while the League's other teams - Agidel (Ufa), Arctic University (Ukhta), Biryusa (Krasnoyarsk), Sverdlovsk Region (Yekaterinburg), Skif (Nizhny Novgorod) and Tornado (Moscow Region) - have only played two games during the first fortnight, and will be in action twice during the forthcoming week.

Top of the League's scoring tables is Dynamo's Evgenia Dyupina, with 6 (1+5) points. Glancing further down, last night's double from Skif's Karoliina Rantamäki against Sverdlovsk Region propelled the Finnish forward into third place overall. The best-performing defender so far is another Petersburg player, Aneta Tejralova from the Czech Republic, whose account for the season shows 4 (2+2) points and a +3 efficiency rating.

The weekend also saw Agidel set a new attendance record – the Ufa team's first home game of the season drew around 3,350 spectators. This record is unlikely to be beaten any time soon – the stadium was packed to the rafters.